Charges: Concealed Weapon
Location:Rhode Island
Description: When Pacino and 2 other men were stopped by officers they were found to be were wearing black gloves and masks as well as carrying a loaded gun.
GemLil's rating:

Charges: Possesion of controlled substance, DUI, Disorderly conduct (2011)
Location: Los Angeles, California
Description: Andy pleaded no contest to all of the charges with the understanding the charges would be dropped upon completetion of a 2 year drug program. In May 2011 Dick was arrested for disorderly conduct and posted $500 bail.
GemLil's rating:

Charges: Domestic Abuse, felony assault, felony menacing
Location:Aspen, Colorado
Description: Sheen was booked into the Pitkin County Jail where he posed for the above photo before appearing before a district court judge and posting $8500 bond.
GemLil's rating:

0
Christian Bale
Date of Arrest: 23/06/08
Charges: Domestic Abuse
Location: London, England
Description: Bale allegedly hit his mother and sister while visiting them prior to the London preview of 'The Dark Knight'
GemLil's rating:

Charges: Careless driving, Leaving the scene of an accident
Location: Taos, New Mexico
Description: Mr. Hopper caused an accident, fled the scene and hid from police. He was later given a $250 fine
GemLil's rating:

0
Gary Coleman
Date of Arrest: 10/07/99
Charges: Failing to pay a fine.
Location: California
Description:Gary Coleman was stopped at a drunk driving check point and police realized he was driving with an expired registration. After running his name through the computers police saw a warrant had been issued for his arrest.
GemLil's rating:

Charges: Possession of cocaine, heroin, and Ecstasy
Location:Los Angeles, CA
Description: The 41-year-old actor was found passed out behind the wheel of his car at around 5 AM and appeared disoriented and possibly under the influence. Dourdan was booked into the local jail, where he posed for a mug shot and was later released after posting $5000 bail.
GemLil's rating:

0
Halle Berry
Date of Arrest: 23/03/00
Charges: Hit and run
Location: Los Angeles, California
Description: A car driven by Halle Berry ran a red light and struck another vehicle. Halle left the scene and went to a hospital. Halle pleaded no contest to the demeanour charge of leaving the scene of accident and received 3 years probation, $1300 fine and 200 hours community service.
GemLil's rating:

Charges: Substance Abuse
Location: Unknown
Description: Grammer was sentenced to 30 days in jail for drunk driving and cocaine possession. He was again arrested for cocaine possession in August 1990 and was sentenced to three years' probation, fined $500, and given 300 hours' community service. In January 1991, he was given an additional two years' probation for violating his original probation through additional cocaine use.
GemLil's rating: 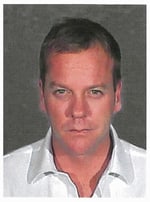 Charges: DUI
Location:Glendale
Description: Served a 48 day jail sentence for driving while over the legal limit of .08. It was the second time in three years that the star of "24" was busted for DUI.
GemLil's rating:

Charges: DUI, Possession of Cocaine, Dangerous driving, Probation Violation (04/2010), Probation Violation (09/2010)
Location: Los Angeles, CA
Description: Lohan somehow weaselled her way out of this with a small fine and a warning. The actress, 24, was ordered to serve three months in jail after a judge determined that she violated the terms of the probation she was put on following two 2007 DUI arrests. She was ordered back to jail in Sept 2010 pending a probation-violation hearing after she failed court-ordered drug tests.
GemLil's rating:


Charges: Attempted Muder
Location: Boston, Massachusetts
Description: Wahlberg robbed a pharmacy while he was under the influence of PCP. He knocked one middle aged Vietnamese man unconscious and permanently blinded another in one eye before he was arrested by the police. Wahlberg was charged for attempted murder. Pleading guilty to the lesser charge of assault, he was sentenced to two years in jail at Boston's Deer Island House of Correction, of which he served 45 days. In yet another incident, the 21-year-old Wahlberg fractured the jaw of a neighbor in an unprovoked attack.
GemLil's rating:

Charges: Speeding
Location:Vermont
Description: Dillon, 44, was nabbed by State Police after his car was clocked going 106 mph on Interstate 91. He was fingerprinted and photographed by state troopers, and given a citation to appear at the Orange County court.

Charges: Possession of marijuana
Location: Austin, Texas
Description: A neighbour called to complain about music blaring from the actor's home. When cops arrived, they found McConaughey dancing around in the buff and playing bongo drums. The drug charges against McConaughey were eventually dropped, though the star did plead guilty to violating Austin's noise ordinance, for which he paid a $50 fine.
GemLil's rating:

Charges: DUI
Location: Los Angeles, CA
Description: When taken aside by cops, Gibson began a drunken anti-semitic rant, telling the cop "F*****g Jews... The Jews are responsible for all the wars in the world....Are you a Jew?". Later adding, "My life is so fucked!". Gibbo was given a mere slap on the wrist for this tryst with the law.

Charges: Child sexual abuse (Seven Counts)
Location: Santa Maria, CA
Description: Jackson was accused of sexually molesting Jordan Chandler in 1993 and Gavin Arvizo in 2003, Chandler accepted an out of court settlement, and Jacko was found not guilty in 2003.
GemLil's rating:

0
Naomi Campbell
Date of Arrest: 2001-2008
Charges: 11 charges, abuse, assault, assaulting a police officer
Location: Various
Description: Campbell has a notorious mean streak, she has been arrested at least 11 times for the abuse or assault of her staff, Campbell has paid over $50,000 in fines. After a recent assault of a police officer and flight attendant on a BA flight, Campbell was given 200 hours of community service.

Charges: Domestic Abuse
Location:New Orleans
Description: Cage was arrested for allegedly hitting his wife in an argument, he was jailed overnight then posted bail.
GemLil's rating:

Charges: Murder
Location: Los Angeles, CA
Description: Charged with the murder of his ex-wife and her boyfriend. The case was thrown out due to a mistrial.

In 2008 OJ was found guilty of 2 charges of armed robbery, conspiracy to kidnap and assault with a deadly weapon, after kidnapping 2 sports memorabilia dealers.

Charges: Possession of Cocaine and Meth.
Location: Florida
Description: Cops were tipped off by a phone call that there were drugs and guns in a hotel room Downey was staying in.
GemLil's rating:

Charges: DUI
Location: Westchester, NY
Description: Charged with drunk driving after his 1995 Chevy Cavalier collided with a tractor-trailer as he attempted to make a turn.
GemLil's rating:

Charges: Fraud
Location: Glostershire, England
Description: At seventeen, after leaving Norfolk College of Arts and Technology, Fry absconded with a credit card stolen from a family friend, and as a result spent three months in Pucklechurch Prison for fraud.
GemLil's rating:

Charges: Delivery of a controlled substance
Location: Kalamazoo, Michigan
Description: Mr. Allen and another man were making a delivery of cocaine to a third man. Unfortunately for them it was a trap and the men were arrested and Tim Allen served time in prison
GemLil's rating:

0
Tom Sizemore
Date of Arrest: 2/11/05
Charges: Domestic Abuse and subsequent probation violation
Location: Los Angeles, CA
Description: Sizemore was sentenced to 17 months in jail and four months in drug treatment for repeatedly failing drug tests while on probation for the assault and battery of his girlfriend Heidi Fleiss. 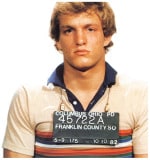 Charges: Disorderly conduct & resisting arrest.
Location: Columbus, Ohio
Description:Woody was dancing in the middle of the street causing a disturbance. After cops put Mr. Harrelson in the police van, he jumped out and tried to run.
GemLil's rating:

Charges: Driving without a licence,
Assaulting an officer
Location: Beverly Hills, CA
Description: After being pulled over by a cop it was discovered Ms. Gabor was driving with a suspended license and registration. Zsa Zsa drove away, got pulled over again and slapped the officer. A flask with liquor was also found in the car.
Some of these guys are legends, some of them are Andy Dick. Whoever they are though, they found themselves in trouble with the law.

This is a list of actors who have been arrested, convicted and or jailed for various crimes, ranging from DUI to murder.

Where I can, I have found a representative mug shot. Rap artists only appear on this list if they have had a movie career also.

N.B: The correct spelling of jail is in fact gaol.

Couples that ignore numbers... by BRODO

A Change of Names by tartan_skirt

Most Attractive Characters in Film by GemLil

Games on Rome (PC) by GemLil

Scarred and Dangerous by GemLil