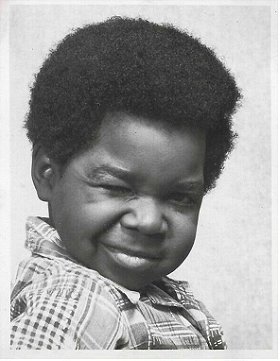 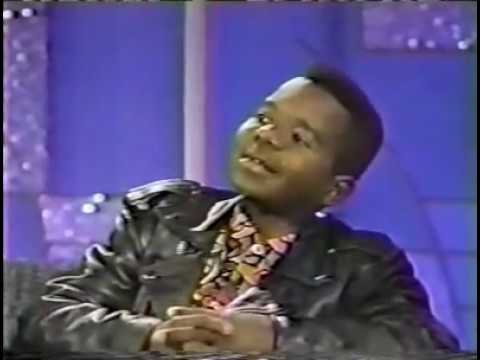 He was born Gary Wayne Coleman on February 8, 1968, to a homeless woman, and was adopted by a fork-lift operator and his nurse practitioner wife from a Chicago hospital when he was just a few days old. Raised in Zion, Illinois, it was discovered that little Gary had severe health issues before the age of 2. Born with one atrophied kidney and an endangering weak second one, he had two kidney transplants by the time he reached age 16 and the effects of his dialysis medication permanently stunted his growth (to 4'8").

A highly precocious comedy cut-up on-camera, Gary proved a natural in local Chicago commercials. As his commercials spread nationwide, audiences began wondering just who this diminutive dynamo was. Norman Lear's talent scout spotted him in a Chicago bank commercial (he was 9 at the time) and decided to reveal to the world who the little guy was. Brought in to brighten up such Lear sitcoms as "The Jeffersons" and "Good Times" (the latter as a friend of little Janet Jackson's character), NBC quickly recognized the boy's comedy prowess and handed the 10-year-old his own prime-time sitcom playground to mug in.

While Arnold (1978)'s underlying approach was to preach racial and social tolerance (it revolved around two lower-class African-American brothers from Harlem who are taken in and adopted by a wealthy, debonair Park Avenue white man after their housekeeper mother dies), the show's powers-that-be smartly deduced that it was the wisecracking gifts of young Coleman, who played the youngest brother, Arnold Jackson, that gave the show its spark. Deemed "NBC's Littlest Big Man," Gary's sly, pouty-lipped delivery of, "What'chu talkin' about, Willis?" soon became a popular American catchphrase. In truth, the comedy program was weak and should probably have faded after a mere season or two, but the public's fascination with young Coleman extended its tepid life to an amazing eight seasons.

Legendary comics such as Bob Hope and Lucille Ball absolutely gushed about the little boy's comedy genius and Gary soon became a hit on the talk show circuit, trading clever banter with the likes of Johnny Carson among others. The boy was also outfitted with a series of lightweight TV-movie showcases which included The Kid from Left Field (1979), Scout's Honor (1980), The Kid with the Broken Halo (1982), The Kid with the 200 I.Q. (1983), The Fantastic World of D.C. Collins (1984) and Playing with Fire (1985). All of them wisely centered around Gary's adorable persona. Modest film comedies also came his way with On the Right Track (1981) and Jimmy the Kid (1982). Topping it all off, the Hanna-Barbera-produced series The Gary Coleman Show (1982) produced an animated version of the child star. Little Gary would make close to $18 million during his nearly decade-long TV reign.

Like many others in his shoes, however, the aging Coleman felt trapped and pigeonholed by his stifling juvenile image and begged to get out from under it. The 18-year-old was truly thankful when the series ended in 1986. Coleman found, however, that a very fickle public was not as receptive to seeing him grow up. Like fellow TV star Emmanuel Lewis, Coleman began aging in appearance but remained trapped in the body of a young boy and the contrast proved too strange for audiences. As a result, Hollywood had little resources as to what to do with Gary Coleman the man. It wasn't long before Coleman was reduced to making weird guest appearances and small parts in even smaller films.

This crash course in reality triggered an increasingly erratic and aggressive behavior in Gary Coleman as he became increasingly angry and bitter about his lack of work when he was so used to be on top of everything. The subsequent tragedies suffered by all three young stars from the "Diff'rent Strokes" show, in fact, was sold out as a jinx package known as the "Diff'rent Strokes curse". While distaff co-star Dana Plato fell heavily into drug addiction, petty crime and pornography before taking her own life in 1999, Todd Bridges, who played Coleman's older brother, battled major cocaine abuse and was later charged (but acquitted of) attempted murder in the late 1980s.

In addition to his life-long health issues, Gary's adult problems came in the form of scattered financial and legal entanglements, as well as scrapes with the law. He was once arrested in 1999 for punching a persistent female autograph fan, in which he was fined and ordered to take anger-management classes. He also had many disorderly conduct and reckless driving charges brought up against him at various times. He would admit that the tally of his life problems led to more than a few feigned suicide attempts. In 1989, Coleman successfully sued his adopted parents and business manager after they allegedly pilfered his youthful fortune for their own self interest totaling $3.8 million in losses, and he won $1,280,000. Despite the large settlement, all of the money was soon spent on taxes, legal fees, as well as his increasingly high medical bills for his continuing dialysis treatments. As a result by 1999 (with no steady acting work) Coleman had to declare bankruptcy, finding work outside the Hollywood industry as a security guard. For self-preservation, he went the reality-show route and became the object of self-mocking cameos to help bring in some cash. As a gag, he ran for California's 2003 governorship during its recall election.

In 2007, he married the much younger actress Shannon Price, whom he met on the set of the low budget film Church Ball (2006), but the quickly marriage dissolved quickly into domestic squabbles that put him in front of the court system yet again on domestic abuse charges. He later moved and settled in Utah.

1. Behind the Camera: The Unauthorized Story of 'Diff'rent Strokes'

5. A Christmas Too Many
View all Gary Coleman movies (11 more)

Agent Kermit D. Fonz added this to a list 1 month, 3 weeks ago
Gone, but not forgotten (1495 person items)

omnivorousrex added this to a list 1 year, 4 months ago
Tribute...We miss you...Patriarchs of Hollywood (266 person items)

omnivorousrex voted for an image 1 year, 5 months ago

Queen of Horror added this to a list 3 years, 9 months ago
Child Stars of the 70s! (33 person items)

Brian G added this to a list 5 years, 11 months ago
People with the middle name Wayne (17 person items)