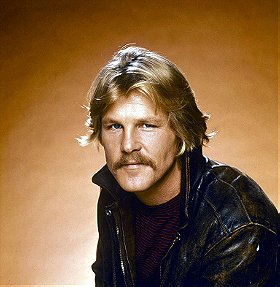 A native of Omaha, NE, Nolte was born February 8, 1941. While a student at Arizona State University, he revealed talent as a football player, but whatever promise he may have had on the field was aborted by his expulsion from the school for bad grades. A subsequent move to California convinced Nolte to try acting instead. He studied at the Pasadena Playhouse, then at Stella Adler's Academy in Los Angeles under Bryan O'Byrne, while he held down a job as an iron worker. After his training, Nolte spent 14 years traveling the country and working in regional theater, occasionally landing parts in B-movies and television films. Debuting onscreen with a small role in Dirty Little Billy (1972), Nolte was 34 when he finally got his break in the acclaimed television miniseries Rich Man, Poor Man (1976). His portrayal of Tom Jordache earned him an Emmy nomination and led to a starring role opposite Jacqueline Bisset in The Deep (1977). In addition to starring in the football exposé North Dallas Forty (1979), Nolte contributed to its screenplay, written by Peter Gent.

Showing a marked preference for unusual and difficult films, it was not long before Nolte became known as a well-rounded actor who brought realism, depth, and spirit to even his most offbeat or even unsympathetic roles. Some of those parts include Beat author Neal Cassady in Heart Beat (1980), a homeless bum who helps a dysfunctional rich family in the hit comedy Down and Out in Beverly Hills (1986), a family man attempting to come to grips with his family's traumatic past while falling in love with his therapist in The Prince of Tides (1991), a midwestern basketball coach in Blue Chips, and a world-weary detective in Mulholland Falls (1996).

For a grim period in the late '80s, Nolte's career was threatened by his unrestrained drug and alcohol use, but a subsequent rehabilitation strengthened his career, paving the way for roles such as Jake McKenna in Oliver Stone's neo-noir thriller U-Turn (1997) and his Oscar-nominated turn as Sheriff Wade Whitehouse in Paul Schrader's Affliction (1997), a picture Nolte also executive produced. Following this triumph, Nolte further re-established his reputation as a major Hollywood player with his role in Terrence Malick's 1998 adaptation of James Jones' The Thin Red Line, headlining a cast including George Clooney, Sean Penn, and John Travolta. If the subsequent adaptation of author Kurt Vonnegut Jr.'s acclaimed novel Breakfast of Champions failed to capture the essence of the written word, Nolte still managed to offer an impressive performance in the following year's The Golden Bowl.

At this point in his career Nolte could certainly be counted on to turn in compelling performances regardless of the project, which made the return of his former demons more tragic than ever. On the heels of a mesmerizing lead performance as an aging gambler in director Neil Jordan's The Good Thief (a remake of the Jean-Pierre Melville classic Bob le Flambeur), Nolte's arrest for driving under the influence in September of 2002 made headlines when it was discovered that he was under the influence of GHB. The disheveled mugshot that followed made him the butt of many a joke; Nolte would later credit the arrest for helping him to clean up his act and get back on track with his onscreen career. A late-night jam that found neighbors phoning police made headlines the following year, and the Hulk came and went with disappointing results.

In the subsequent period, Nolte remained in good form, with idiosyncratic and fascinating roles. He triumphed in the spectacular late 2004 drama Hotel Rwanda, as the politically impotent Col. Oliver during the Rwandan genocide.

Neophyte director Hans Petter Moland then tapped Nolte for a pivotal characterization in his drama The Beautiful Country, released in July 2005. That same year, Nolte also triumphed on the festival circuit with his delicate work in Olivier Assayas's harrowing dysfunctional family drama Clean. In 2006, he voiced Vincent in the hit animated feature Over the Hedge, and claimed a seldom-seen but pivotal role in the thriller A Few Days in September, as an American spy desperate to reconnect with his children. Next up was Mysteries of Pittsburgh, an adaptation of Michael Chabon's debut coming-of-age novel.

In 2008 Nolte appeared as the grizzled Vietnam Vet whose life the movie within the movie in Tropic Thunder is based on, and in the next few years he continued to lend his distinct, gravelly voice to a number of projects including the Kevin James vehicle Zookeeper.

In 2011 his work in Warrior, as the father of two MMA fighters, earned him strong reviews as well as Oscar, BAFTA, and Screen Actors Guild nominations for Best Supporting Actor.

He was arrested for selling fake IDs in 1962 and received 5 years probation.

Early jobs included modeling (runway and print ads) and being a metalworker.

He was 35 when he got his first prominent role in the 1976 miniseries Rich Man, Poor Man.

He was considered for the roles of Superman and Han Solo and turned down Indiana Jones.

He was named by People Magazine as the Sexiest Man Alive in 1992.

He entered rehab shortly after being arrested for driving under the influence in 2002, when his infamous arrest photo was taken.

1. Lyle Lovett and His Large Band

1. Lyle Lovett and His Large Band

yellowhair voted for an image 1 month, 1 week ago

mrblond voted for 8 images [View All] 9 months, 2 weeks ago

Gulielmus voted for 7 images [View All] 10 months ago

Gulielmus voted for 2 images 10 months ago

Totoro voted for an image 10 months, 3 weeks ago

nverland voted for an image 1 year, 5 months ago

johanlefourbe added this to a list 1 year, 12 months ago

mirinbuddy voted for an image 2 years, 6 months ago

Gulielmus voted for an image 2 years, 6 months ago

darthjoker12 added this to a list 2 years, 7 months ago

SwtChaos added this to a list 4 years, 9 months ago

Exclusive voted for an image 4 years, 9 months ago

" as Paddy Conlon in Warrior"

giannicorso73 voted for an image 5 years, 10 months ago

MarkusT90 added this to a list 5 years, 11 months ago
My Favorite Actors (126 person items)

jazzybop voted for 9 images [View All] 6 years, 4 months ago