Wrong Actor for the Job ? 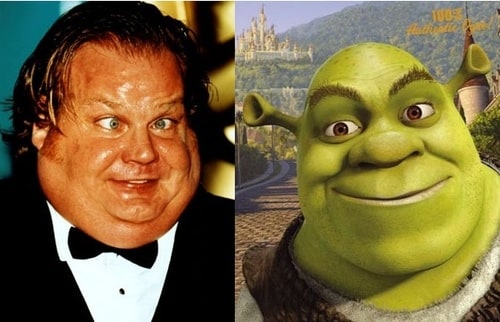 Chris Farley was originally signed on to voice the ogre, Shrek, and had recorded the majority of the dialogue for it. Tragically, Farley died from a heart attack, induced by a drug overdose, before he could finish. The script that Farley read from was vastly different from the version completed with Mike Myers. Originally, Shrek was written as a kind hearted, teenaged ogre who wanted to become a knight. After Farley’s death, Dreamwork’s decided to start fresh. As a tribute, Shrek is seen using finger quotes throughout the movie in reference to one of Farley’s famous SNL characters.
Coby's rating: 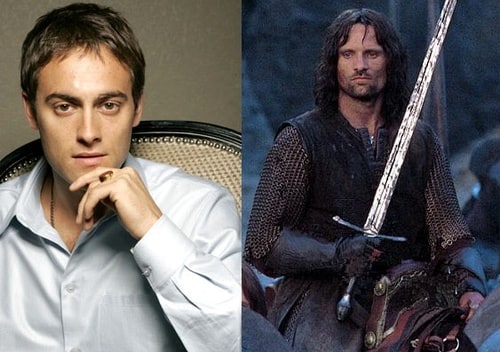 Irish actor Stuart Townsend spent two months rehearsing and training for the role of Aragorn in Lord of the Rings trilogy, only to be fired the day before filming began. At the last minute, Peter Jackson decided that he needed someone older than Townsend, who was only 29 at the time. There were also rumors that the two did not get along well on set. Viggo Mortensen, who was 14 years older than Townsend, accepted the role after being convinced by his son, who was a fan of the novels. Townsend never received compensation for his time on set, yet he was apparently happy to be moving on.
Coby's rating: 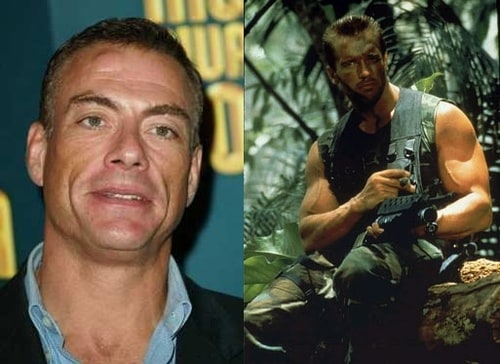 Producers cast Van Damme as the title role in the hopes that his martial arts abilities would make the predator seem agile, despite the costume; which, at the time, was a completely different design from the one seen in the movie. Van Damme found the suit uncomfortable and clumsy, about which he was quite vocal on set. He quit Predator after two days of filming, allegedly because he was upset about playing an “uncredited special effect”. A new, more agile costume design and 7’2″ actor Kevin Peter Hall made for a much more imposing villain.
Coby's rating: 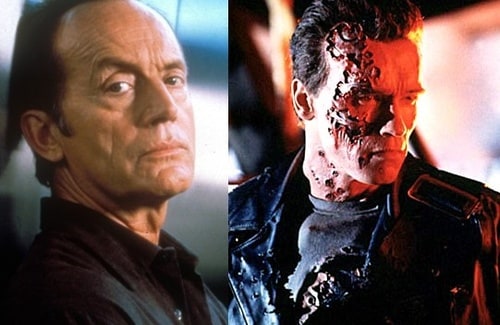 When James Cameron first wrote the script, he wanted a regular looking guy who didn’t stand out in a crowd. Henriksen, who was a long time friend of Cameron’s, was his first choice. When Schwarzenegger came in to read for the role of Kyle Reese, it was decided that he would be better suited in the lead role. Henriksen would eventually be cast as Detective Vukovich, a relatively small role. Afterwards he would also star in Cameron’s Aliens in the role of Bishop. O.J. Simpson had also been considered as the Terminator but Cameron felt he was “too nice” to play a killing machine.
Coby's rating:

Francis Ford Coppola’s epic film Apocalypse Now was plagued with problems from the start: Sets were destroyed by typhoons, Marlon Brando was uncooperative and overweight, and he was forced to settle on Harvey Keitel in the lead. Steve McQueen, Robert Redford, Jack Nicholson and Al Pacino had all turned down the role. After a few days of shooting, Coppola reviewed some of his footage and decided that Keitel was not well suited for the role. Martin Sheen, who had impressed Coppola when he had read for the part of Michael Corleone in the Godfather, stepped in as Keitel’s replacement. A few months into shooting Sheen had a heart attack, delaying the film, yet again. What was to be a 5 month shoot ended up taking over a year to complete.
Coby's rating: 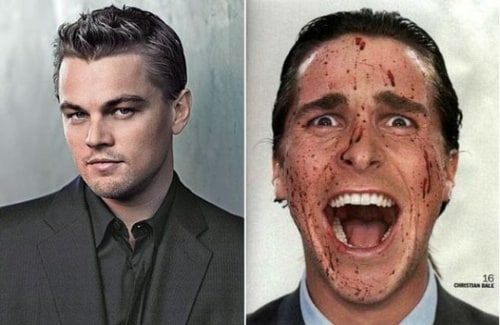 Leo expressed an interest in playing Patrick Bateman in American Psycho but eventually reconsidered over fears his fan base would never accept him as a yuppie serial killer. His exit enabled Christian Bale - always director Mary Harron's first choice for the controversial role - to return to the project.
Coby's rating: 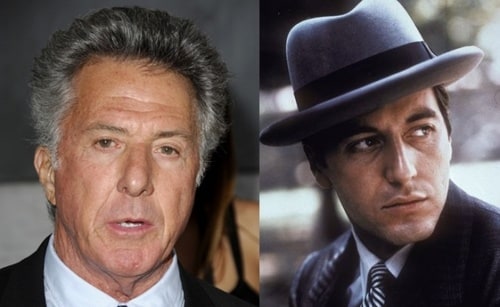 Pacino has a few men to thank for the movie that made his name, including one Dustin Hoffman. Hoffman had made Hollywood inroads with The Graduate, but chose to decline The Godfather, which would go on to be named one of the best movies of all time. Oops. Other actors to decline included Jack Nicholson and Warren Beatty.
Coby's rating:

Rourke and Stallone were both in the frame to play Axel Foley in Beverly Hills Cop, originally conceived to be more of a hard-edged thriller than the action comedy it eventually became. When they left the project, the script was hastily rewritten to accommodate new star Eddie Murphy.
Coby's rating: 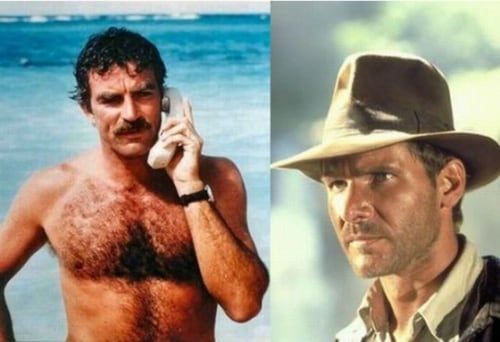 Selleck was offered the role of Indiana Jones in Raiders of the Lost Ark but had to turn it down because he had already committed to appearing in TV show "Magnum P.I." With just three weeks to go, director Steven Spielberg persuaded George Lucas to cast Harrison Ford.
Coby's rating: 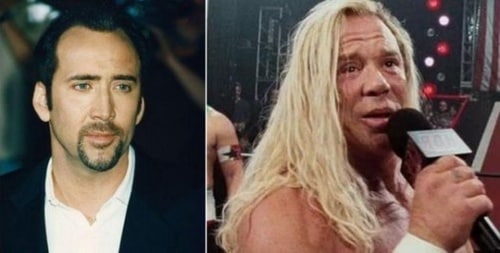 Cage was pumped to play Randy "The Ram" Robinson in The Wrestler but pulled out over fears he would not have enough time to hone the necessary physique. His departure was good news for Mickey Rourke, who ended up with a Bafta, a Golden Globe and "Iron Man 2."
Coby's rating: 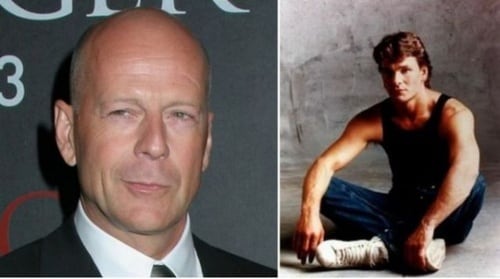 Oh the irony - the future star of "The Sixth Sense" thought "playing a ghost would be detrimental to his career" so he declined to star in Ghost, a huge box office smash and career highlight of Patrick Swayze and Willis' then-wife, Demi Moore. Must have made for interesting pillow talk.
Coby's rating: 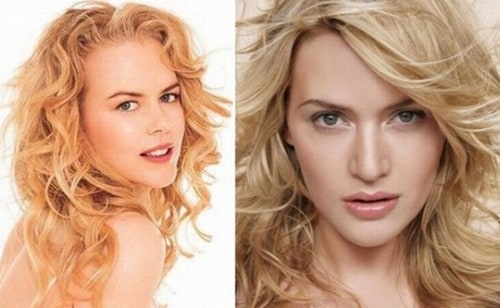 Kidman won an Oscar for The Hours and was all set to reunite with director Stephen Daldry on The Reader. When the Australian star became pregnant, though, she swiftly withdrew, allowing Kate Winslet to get the role that won her the Oscar she had previously been denied five times.
Coby's rating: 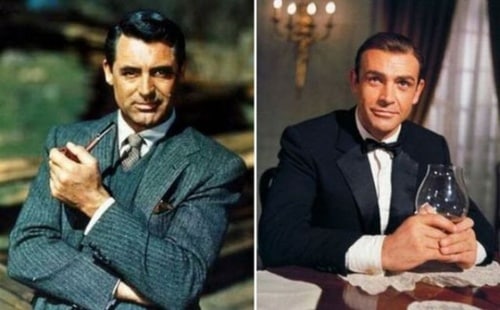 Ian Fleming had Grant in mind for the role of the superspy but Grant met the Dr No offer with a resounding... "no". At 58, he thought he was too old for the role, and also didn't fancy being tied to a film series. Grant starred in just three movies after that - wonder if Bond would have kept him going well past his pension?
Coby's rating: 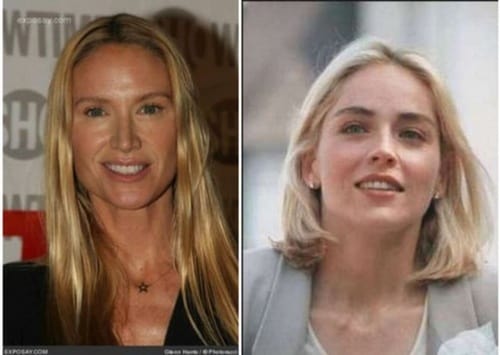 Basic Insinct could have made Kelly Lynch a household name instead of a, "Who?.. oh, the one from Drugstore Cowboy?" But recent interviews claim Lynch turned down the role as it wasn't a balanced portrayal of bisexual women. She went on to star in lesbian film Three Of Hearts and The L Word. Kelly is married with kids, just in case you're wondering. 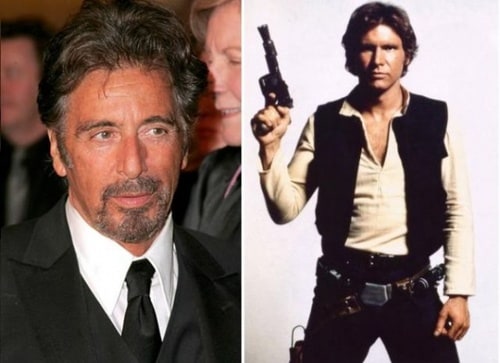 Al turned down the role of Han Solo, leaving the path clear for Harrison Ford. Perhaps Star Wars was just a little too otherworldly for "The Godfather" star, who stuck to his gangster guns in movies such as "Scarface," "The Godfather" series and "Carlito's Way." Things could have been very different, in a galaxy far, far away...
Coby's rating: 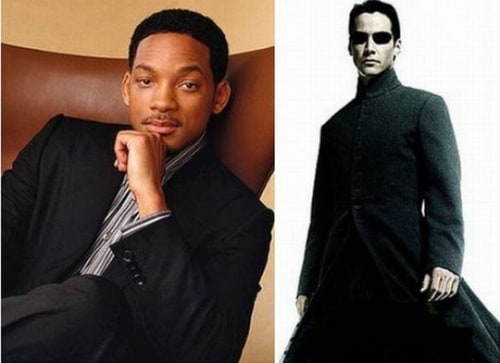 Will Smith was handed the Matrix script on a platter but promptly passed. "In the pitch, I just didn't see it," he says. "I would have absolutely messed up 'The Matrix'... Keanu was smart enough to just let it be. Let the movie and the director tell the story and don't try and perform every moment." Hmm, backhanded compliment there?
Coby's rating: 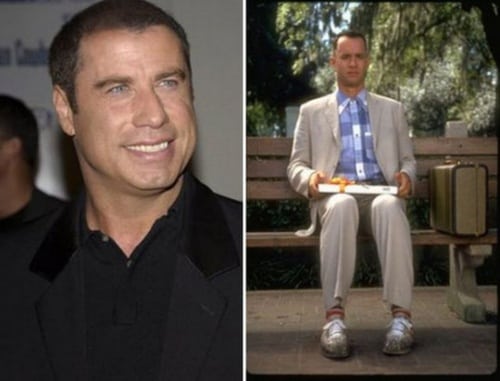 Travolta was offered the role of Forrest Gump in Robert Zemeckis' picture but turned it down as did Bill Murray and Chevy Chase. Tom Hanks ended up playing the part and winning his second Oscar for it, beating Travolta, nominated the same year for "Pulp Fiction," in the process.
Coby's rating: 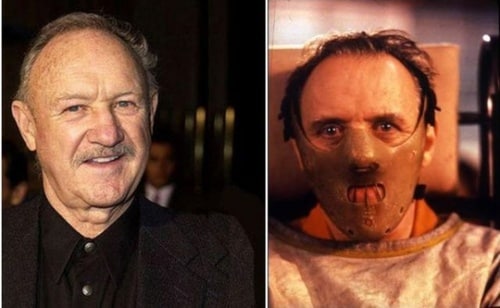 Hackman originally owned the rights to The Silence of the Lambs and at one stage intended to play Hannibal "The Cannibal" Lecter. When he got cold feet, the film was offered to Sean Connery and Jeremy Irons. Both turned it down, allowing Anthony Hopkins to bag his Oscar-winning part.
Coby's rating: 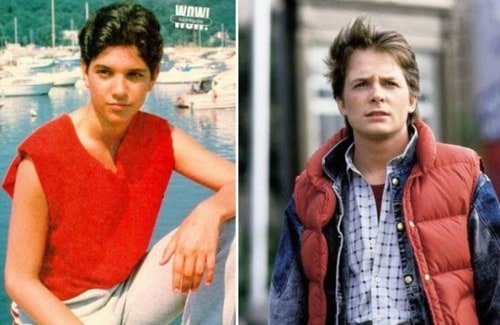 Karate Kid Macchio had his own trilogy in the works when Back to the Future was offered, but little did he know how successful the time-travel series would be. The role famously went to Eric Stoltz before he was dropped, mid-filming, for Michael J Fox. A few alternate time lines to consider there. 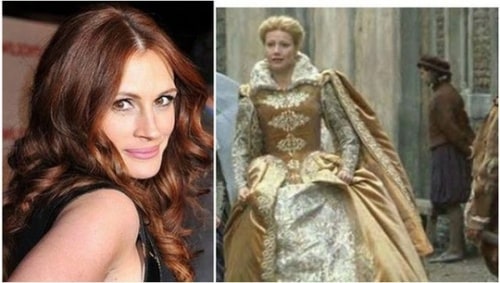 Roberts was lined up to be the female lead in Shakespeare in Love in the early 1990s but abruptly pulled out when Daniel Day-Lewis, her boyfriend at the time, refused to play the Bard. Some years later, Gwyneth Paltrow played the role and scooped an Oscar for her trouble. 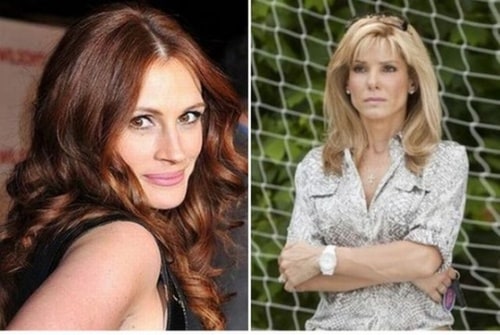 Also she was first choice for the real-life do-gooder in The Blind Side. But it turned into Sandra Bullock's very own "Erin Brockovich" when the "serious" role won Sandy her first Oscar. Meanwhile Roberts appeared in the atrocious "Valentine's Day." Still, it was Sandy's turn, right?
Coby's rating: 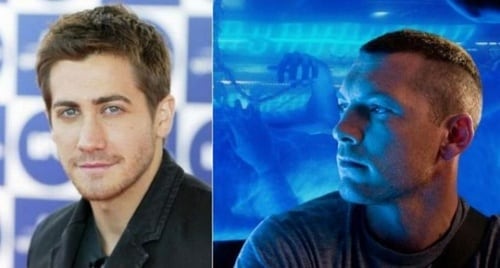 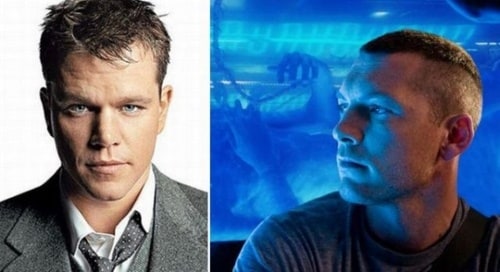 Matt had discussions with James Cameron about Avatar but could not accept the role of Jake Sully (eventually played by Sam Worthington) due to a scheduling conflict with "The Bourne Ultimatum." "He was a gentleman about it," Matt shrugged later. "Clearly my not participating cost the film a lot."
Coby's rating: 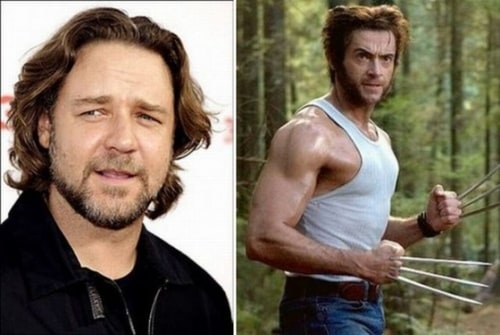 Big Russ was offered the Wolverine role in the first X-Men but demanded too much money. Scottish actor Dougray Scott was then cast, but had to pull out when filming went over schedule on "Mission: Impossible II." So Hugh Jackman stepped in, sticking around for two sequels and a prequel. 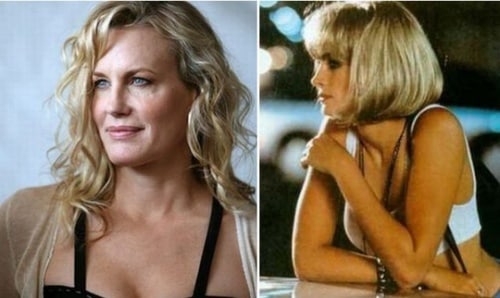 Hannah turned down the role as Vivian in Pretty Woman because she thought it was "degrading for the whole of womankind. They so9ld it as a romantic fairytale when in fact it's a story about a prostitute who becomes a lady by being kept by a rich and powerful man." It also made Julia Roberts a huge star, of course, but good on Daryl for sticking to her guns.
Coby's rating: 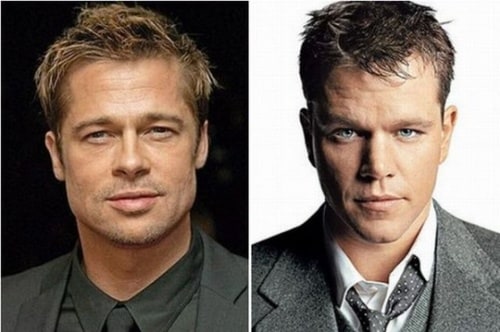 Pitt was lined up to play Jason Bourne in The Bourne Identity but pulled out to play another secret agent in "Spy Game," opening the door for his "Ocean's Eleven" co-star Matt Damon. "Bourne Identity" director Doug Liman would eventually work with the Pittster on "Mr. and Mrs. Smith."
Coby's rating: 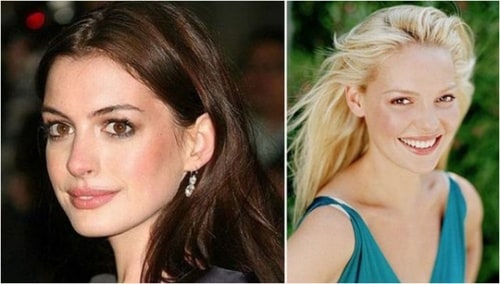 Anne-Hath was originally given the lead in Knocked Up but pulled out when she discovered Judd Apatow intended to use footage of an actual child birth in the scene where her character has a baby. Katherine Heigl had no qualms about it and ended up securing her career-making role.
Coby's rating: 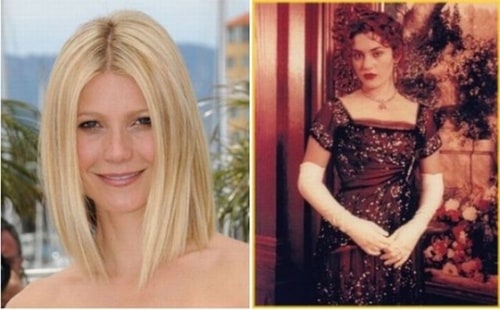 Paltrow was James Cameron's first choice to play Rose in Titanic but turned it down. Claire Danes was also offered the role, but passed because she had just worked with Leonardo DiCaprio on William Shakespeare's "Romeo + Juliet." Kate Winslet begged to be cast in the film and was.
Coby's rating: 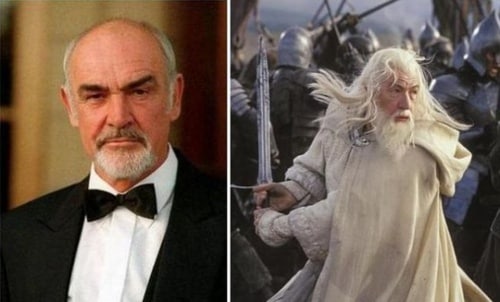 Sir Sean could have made a fortune had he accepted a lucrative profit-sharing deal to play Gandalf in the Lord of the Rings series. But the normally canny Scot turned down the offer, saying he'd read the script and "never understood it". Sir Ian McKellen would eventually play the wizard role.
Coby's rating:

Many actors turn down roles only to regret it later. Maybe their second thought was correct. Everyone can imagine, for example, Brad Pitt playing Jason Bourne but what about other actors and the roles they refused. Have a look at the photos in this post and decide for yourself was their choice a good one or not.

Bruce Willis and His Love for Numbers by Stehako

Because the bad guy is always ugly by My raimBow

Actors who looks the same on every movie poster by Lexie

10 Actors Who Could Play Dracula by Rossjm

The evolution of Sean Penn by johanlefourbe

Movies those have multiple roles by same actor by C!pH3r

The Many Faces of Amy Winehouse by Coby