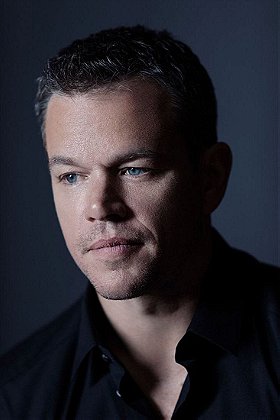 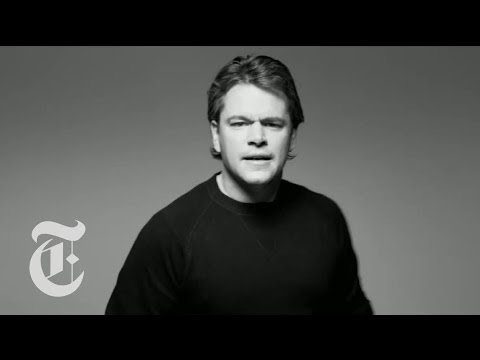 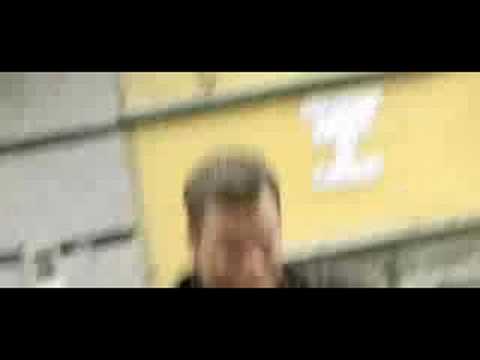 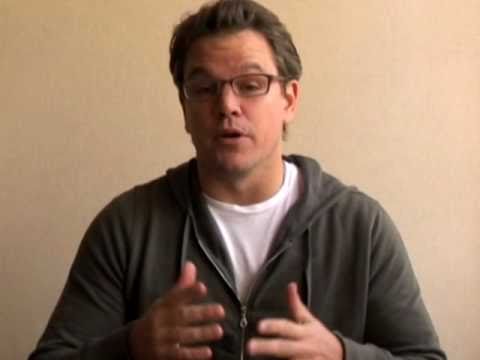 A native of Cambridge, Massachusetts, where he was born on October 8, 1970, Damon grew up in prosperous surroundings with his tax preparer father, college professor mother, and older brother. At the age of ten, he befriended Affleck, a boy two years his junior who lived down the street. Educated at Cambridge's Rindge and Latin School, Damon landed his first role in a Hollywood production before the age of 18, with a one-scene turn in Mystic Pizza (1988). Not long after, Damon gained acceptance to Harvard University, where he studied for three years before dropping out to pursue his acting career. During his time there, he had to write a screenplay for an English class, that served as the genesis of Good Will Hunting.

Arriving in Hollywood, Damon scored his first big break with a plum role in School Ties opposite Affleck. As the film was a relative flop, Damon's substantial role failed to win him notice, and he was back to laboring in obscurity. It was around this time, fed up with his Hollywood struggles, that Damon contacted Affleck, and the two finished writing the former's Harvard screenplay and began trying to get it made into a film. It was eventually picked up by Miramax, with Gus Van Sant slated to direct and Robin Williams secured in a major role, opposite Damon as the lead. Before Good Will Hunting was released in late 1997, Damon won some measure of recognition for his role as a drug-addicted soldier in Courage Under Fire; various industry observers praised his performance and his dedication to the part, for which he lost forty pounds and suffered resulting health problems. Any praise Damon may have received, however, was overshadowed the following year by the accolades he garnered for Good Will Hunting. His Oscar nomination for Best Supporting Actor, Best Screenplay win alongside Affleck, and strong performance in the film virtually guaranteed industry adulation and steady employment, a development that became readily apparent the following year with lead roles in two major films. The first, John Dahl's Rounders, cast Damon as a card shark with a serious gambling addiction, who risks his own personal safety when he becomes entangled with a reckless loser buddy (Edward Norton).

Damon's second film in 1998, Steven Spielberg's Saving Private Ryan, brought him even greater recognition. As Ryan's title character, Damon headlined an all-star line-up and received part of the lavish praise heaped on the film and its strong ensemble cast. The following year, Damon signed for leads in two more highly anticipated films, Anthony Minghella's The Talented Mr. Ripley and Kevin Smith's Dogma. The former cast the actor against type as the title character, a psychotic bisexual murderer, with a supporting cast that included Cate Blanchett, Jude Law, and Gwyneth Paltrow. Dogma also allowed Damon to cut against the grain of his nice-guy persona by casting him as a fallen angel. One of the year's more controversial films, the religious comedy reunited him with Affleck, as well as Smith, who had cast Damon in a bit role in his 1997 film, Chasing Amy. Damon next delivered noteworthy performances in a pair of low-grossing, low-key dramas, The Legend of Bagger Vance and All the Pretty Horses (both 2000), before appearing in director Steven Soderbergh's blockbuster remake of the Rat Pack classic Ocean's Eleven the following year. 2002 found the actor vacillating between earnest indie projects and major Hollywood releases. Behind the camera, Damon joined forces with filmmaker Chris Smith for the Miramax-sponsored Project Greenlight, a screenplay sweepstakes that gave the winner the opportunity to make a feature film and have the process recorded for all to see on an HBO reality series of the same name.

Toward the end of 2001, Damon scored a box office triumph with director Doug Liman's jet-setting espionage thriller The Bourne Identity. With this effort, Damon proved once again that he could open a film with just as much star power as his best friend and colleague. Better yet, Bourne reinforced Damon's standings with the critics, who found his performance understated and believable. The press responded less favorably, however, to Damon's reunion project with Van Sant, the experimental arthouse drama Gerry (2003). Also in 2003, Damon starred opposite Greg Kinnear in the Farrelly Brothers' broad comedy Stuck On You, as the shy half of a set of conjoined twins.

In 2004, Damon reprised the role of Jason Bourne in The Bourne Supremacy. As the actor's biggest leading-man success to date, it reinforced Damon's continued clout with audiences. Staying on the high-powered sequel bandwagon, he reunited with Brad Pitt and George Clooney for the big-budget neo-rat pack sequel Ocean's Twelve later that year. 2005 was somewhat lower-key for the actor, as he toplined Terry Gilliam's disappointing The Brothers Grimm and joined the sprawling ensemble of Syriana. After working seemingly non-stop for a few years, Damon claimed only a call from Martin Scorsese would get him to give up his resolve to take some time off. Sure enough, that call came. The Departed, an American remake of the Hong Kong mob-mole thriller Infernal Affairs, co-starred Jack Nicholson and Leonardo DiCaprio. Playing the squirmy, opportunistic cop to DiCaprio's moral, tormented mobster, Damon underplayed his part to perfection while holding his own opposite his two co-stars. Damon then took the lead role in the Robert De Niro-directed CIA drama The Good Shepherd. In 2007, the actor once again returned to box office franchises for the sequels Ocean's Thirteen and The Bourne Ultimatum, the latter of which netted him -- by far -- the largest opening-weekend take of his career to that point. 2009 was another great year for the hard-working star. His turn as the unstable federal informant in Steven Soderbergh's wicked comedy The Informant! earned him rave reviews, and his supporting work in Clint Eastwood's Invicus, as the leader of the South African rugby team, earned Damon nominations from the Golden Globes, the Screen Actors Guild, and the Academy. In 2010 he reteamed with Eastwood for the supernatural drama Hereafter, and continued working with the best filmmakers of his time by landing a supporting role in the Coen brothers remake of True Grit.

Meanwhile, Damon tried his hand at small screen work with a memorable recurring role as Carol, an airline pilot and sometime boyfriend of Liz Lemon, on the NBC situation comedy 30 Rock and a lauded turn opposite Michael Douglas' Liberace in the TV movie Behind the Candelabra. Damon had long since established himself as an A-list movie star, however, and would continue to star in big screen projects for years to come, including notable titles like Contagion, The Adjustment Bureau, and We Bought a Zoo. Damon next turned in performances in three films set in outer space: Neill Blomkamp's Elysium (2013), a supporting role in Christopher Nolan's Interstellar (2014) and an Oscar-nominated spin in Ridley Scott's The Martian (2015).

Worked as an extra on Field of Dreams (1989) with friend Ben Affleck. During the shoot, he picked a few blades of grass from Boston's Fenway Park as mementos for his father.

Left Harvard University 12 credits shy of a degree in English to pursue a career in acting.

Bartended in Tennessee to perfect his Southern accent for a role in The Rainmaker (1997) and hired a customer to be his dialect coach.

Learned to play the piano for The Talented Mr. Ripley (1999).

Cofounded the production company LivePlanet with Ben Affleck in 2000.

Earned a star on the Hollywood Walk of Fame in 2007. Was also named People Magazine's Sexiest Man Alive that same year.

Became the voice of TD Ameritrade commercials in 2012; he donated his entire salary to charity.

Embroiled in a long-standing "feud" with Jimmy Kimmel, which resulted in Damon taking over an episode of Kimmel's show in 2013.

Founded the H2O Africa Foundation, which eventually became Water.org, which aims to provide aid to countries that do not have access to clean water.

Hollywood People voted for an image 2 months ago

Les Sports voted for an image 2 months ago 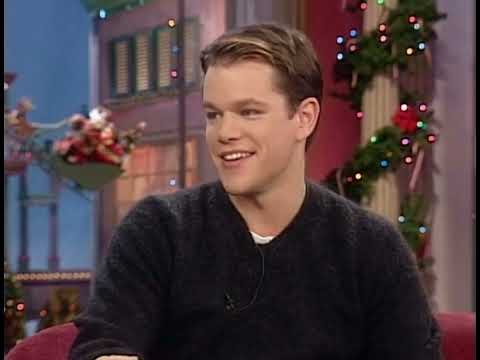 UNICEF URGENCE voted for an image 3 months, 2 weeks ago

FBI POLICE voted for an image 3 months, 2 weeks ago

A.M.A posted a image 5 months ago

yellowhair voted for an image 5 months, 3 weeks ago

Voyage en Italie voted for an image 6 months, 1 week ago

crazymetalhead added this to a list 10 months, 1 week ago
My favorite celebrities (262 person items)

Georgini added this to a list 2 years, 3 months ago

Darthmasco added this to a list 2 years, 7 months ago
Libra (178 person items)

matt added this to a list 2 years, 12 months ago
Most beautiful men on earth 3 (200 person items)

breri added this to a list 3 years, 4 months ago
HOT ACTORS (39 person items)

unicornsugar added this to a list 3 years, 8 months ago
Faces: The Northeast (66 person items)

aLittleTyger voted for an image 3 years, 12 months ago