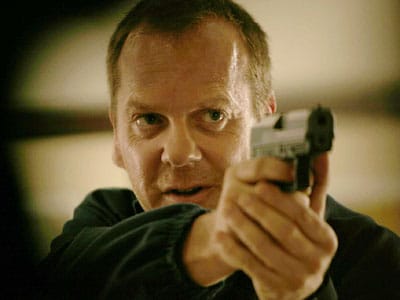 A man with a gun can really be scary. But agent Jack Bauer doesn't need one. He can use anything to kill his enemies. Even when he's being tortured he can be dangerous. He'll do anything to get the job done. Even if it means torture someone to death. He's willing to blackmail criminals by using their loved ones against them. Jack Bauer has killed 268 people in 24 in 8 seasons and for a good guy, that's why he is the most dangerous character ever.
TheKnight12's rating: 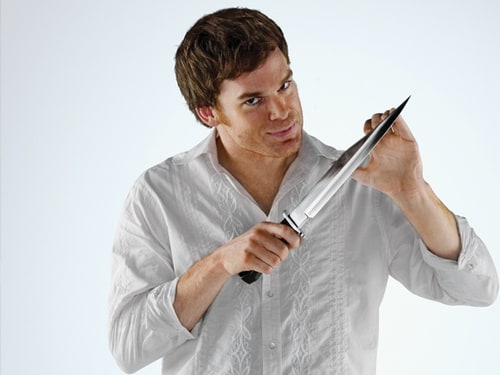 A serial killer, Dexter Morgan is very dangerous but he doesn't look it. The man kills bad people to killers and rapists and who ever comes under The Code of Harry. Dexter literally will kill anyone who's done bad in past or present. And his way of killing his stabbing them in the heart and chopping the bodies into pieces then throwing it into the sea. 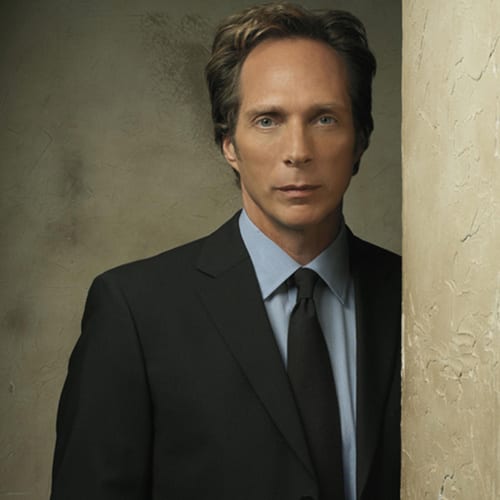 When 8 prisoners escaped from Fox River prison, FBI agent Alex Mahone was called in to capture them. Very dangerous showing him that he has been told by The Company too kill them all. He was willing to do anything to get information. He was very dangerous minded as very intelligent, matching with Michael Scolfield's mind.
TheKnight12's rating: 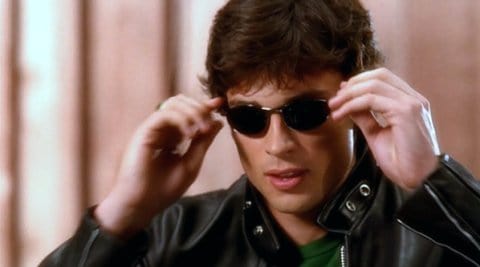 Clark Kent was hardly considered as dangerous but his powers are such as strength and heat vision. It's not until he's exposed to Red Kryptonite that makes him dangerous. Red Kryptonite turns Clark into something dangerous, taking his emotions away and bringing out his desires that he kept within him. He also becomes a womaniser and dangerously flirts with many like Lana Lang, Chloe Sullivan and Lois Lane. He could be more dangerous as he could been capable to kill someone like Lex Luthor, Tess Mercer and even Jonathan Kent. 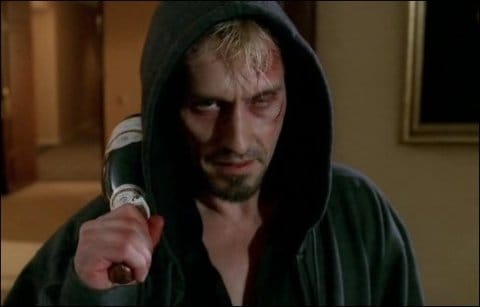 Theodore Bagwell aka T-Bag is one of the most dangerous Fox River prisoner. The man had killed many people before going to prison but even when he escapes he continues to start leaving a path of kills in his ways. Even with one hand, he was able to kill many people. 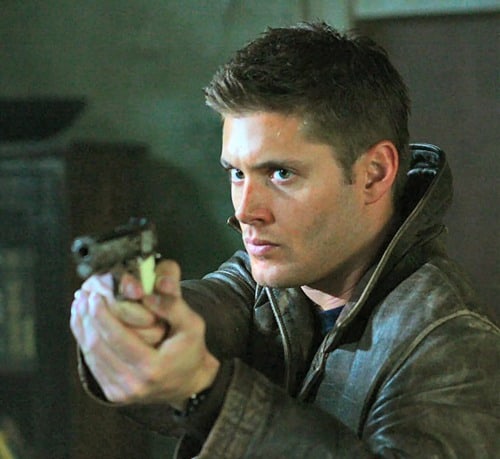 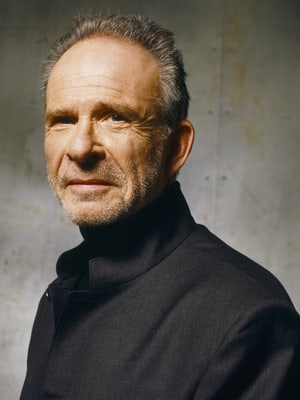 Arvin Sloane is a dangerous character. The director of SD-6 which the agency people believe is working for the CIA. But what people don't know is that Sloane is actually working for a group called "The Alliance." What makes him dangerous is that he is backed by them if anyone who works for SD-6 mentions the name to the anyone they know, they would be killed instantly. 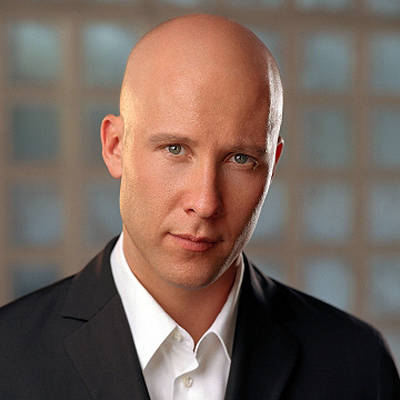 Smallville's own billionaire mastermind criminal, using the path that his father, Lionel Luthor left behind. Lex Luthor was very obsessed with many things that stuck Smallville such as Meteor Showers and Green Meteor Rocks, Meteor Freaks, Kents, spaceships, aliens and Lana Lang. He kept a secret lab called 33.1 which had people with powers. What made him more dangerous that he'll even kill to tie of lose ends. 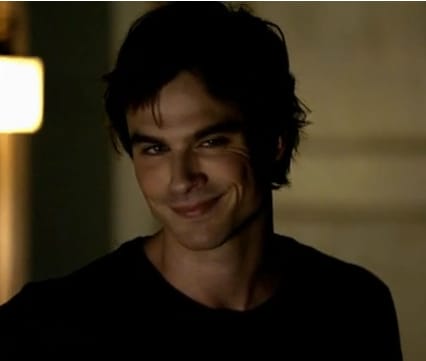 Damon Salvatore is the dark handsome, strong, charming and dangerous vampire who can go from casual and playful to pure evil in less than a heartbeat. Damon has no remorse for killing humans which he enjoys to make his brother, Stefen Salvatore's life miserable. That is why Damon Salvatore is dangerous. 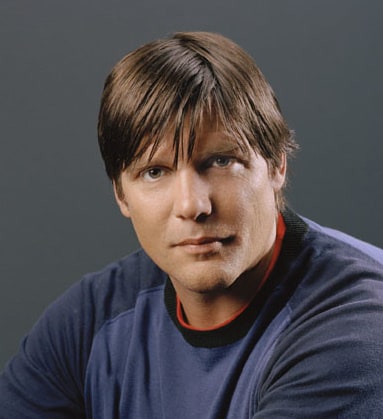 Dan Scott has everything to power, money and one time Mayor of Tree Hill. He causes havoc in the lives of his sons Lucas and Nathan Scott. Eventually, everyone hates him because he is like a bully. What made him dangerous was he shot his brother, Keith Scott in cold blood without hesistating. 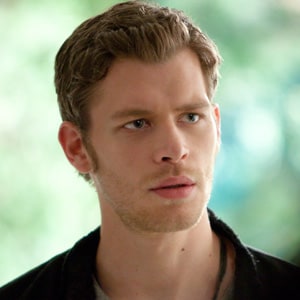 Niklaus aka Klaus is become the most dangerous vampires on TV. He is the first Original vampire hybrid. He shows no remorse of any killings which he has done throughout the show. Very charming also deadly and loves to tormint the other vampires and humans. And he's hard to kill. 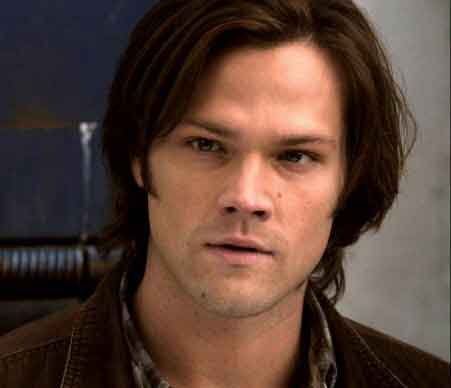 Sam Winchester is very dangerous. As the younger brother of Dean's, Sam has a better physique and stronger. He had the power of telekinesis and was capable of killing many supernatural beings such as demons. 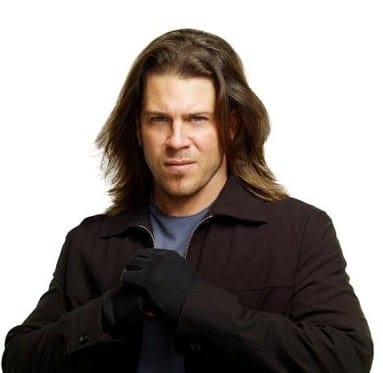 Eliot Spencer is one cool character and he's very dangerous. The former soldier works for a team of criminals called Leverage can be seen as dangerous. He's basically can do everything from fighting, using weapons like melees and firearms and he can kill as well. 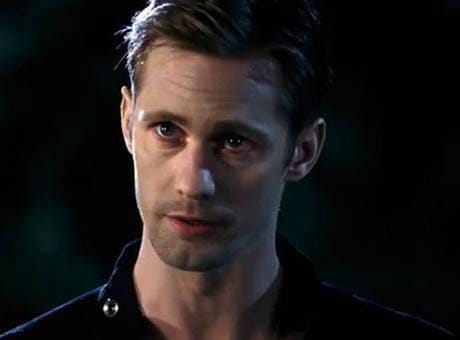 Eric Northman is considered dangerous at times as he is a vampire. He's capable of killing any vampire who may be older than him. He can be manipulative at times by forcing Sookie to drink his blood so she could be sexually attractive to him. Eric and Bill Compton at times are considered rivals and partners at times. Eric also hunts down other vampires and also werewolves. 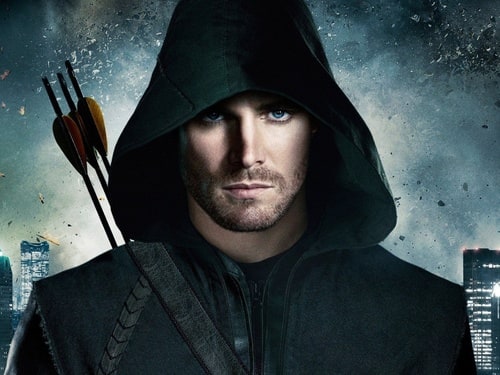 Oliver Queen is another dangerous guy. We all know about superheroes code of not killing anyone but Oliver is a vigilante called The Green-Hooded Vigilante. He wouldn't hesitate to shoot and kill bad guys who has destroy Starling City. 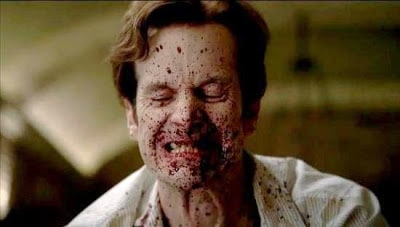 Russell Edgington is one dangerous vampire. He causes chaos by killing many people and killed a newscaster on live television. An ancient vampire of almost 3,000 years old, Russell is considered by many to be the oldest, and most powerful vampire in existence, as well as the most craziest of them all. 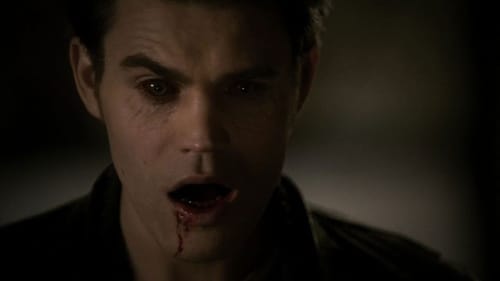 We all know that Stefan Salvatore is a tame vampire who survives drinking animal blood. But even he can become dangerous when exposed to human blood. Stefan was known to kill several victims during his early days as a vampire being nicknamed "The Ripper." 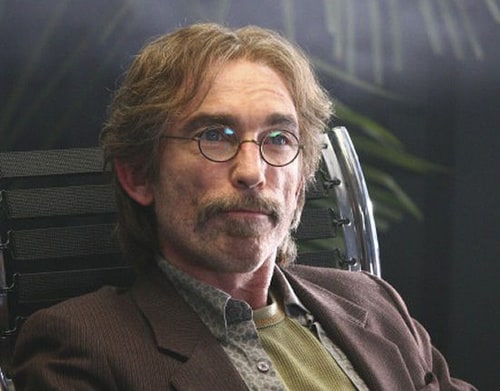 Guerrero is a world-class computer hacker, technology expert and trained assassin who of fers his services on cash payment or a freelance basis.Guerrero exhibits the personality traits of a sociopath. He is ruthless and operates without qualms; focused on the direct approaches to accomplishing his goals and he takes pride in the quality of his work. 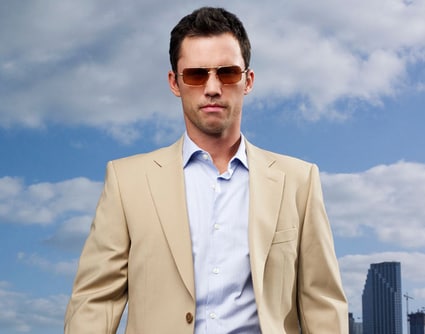 When a spy is burned, Michael Western becomes one of the dangerous characters on TV. He can fight anyway with on opponent bigger or stronger then him. Using weapons like guns, knives and explosives makes him dangerous. What makes Michael Western so dangerous is his mind. His intellance can create something deadly from scraps. 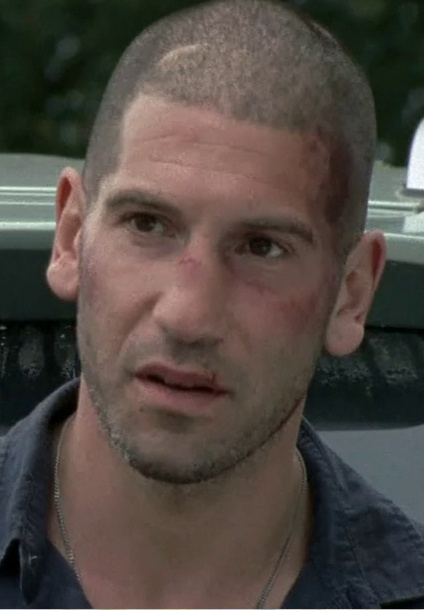 Shane Walsh is really dangerous in The Walking Dead. He's very aggressive towards Walkers. Shane is also obsessive with Lori who he has confessed that he loves her before Rick returned from a coma. 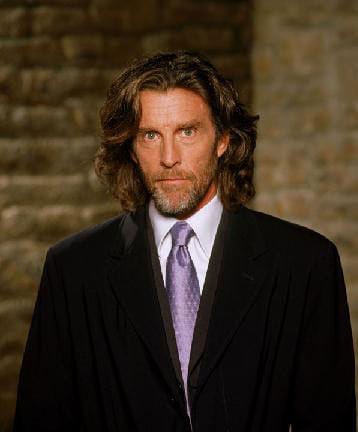 Lionel Luthor is very dangerous. Although he might not be a threat himself at times, he as others that can help him. He's makes real threats to many characters during Smallville such as Lex, Clark, Johnathan, Lana, Chloe and Oliver. He was the reason that Oliver's parents were killed. 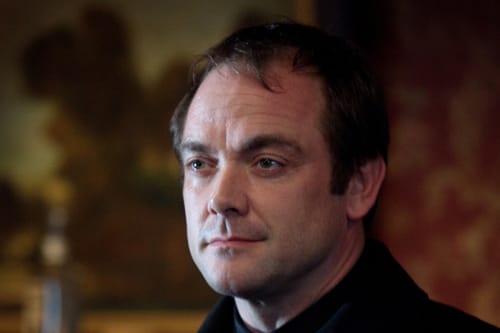 Crowley is defiantly on dangerous demon from hell. He is the King of Hell and maybe one of the dangerous demons on Supernatural. He also slaughter many supernatural creatures such as vampires, shapeshifters and even demons. He is cunning, manipulative and kills his own kind as well. The demon cannot be killed as he is known to be immortal. 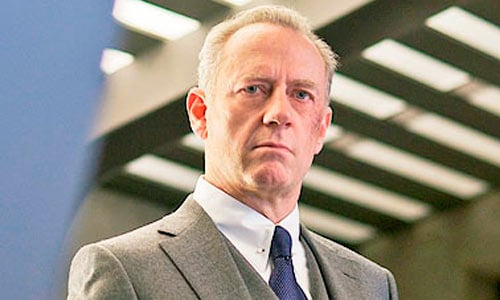 Percy is defiantly one dangerous man. He leader of the secret goverament black ops agency is used to lead his people to assasinate people around the world. He seems like a man who just sits behind a desk calling the shots but he can be dangerous with a gun or without. 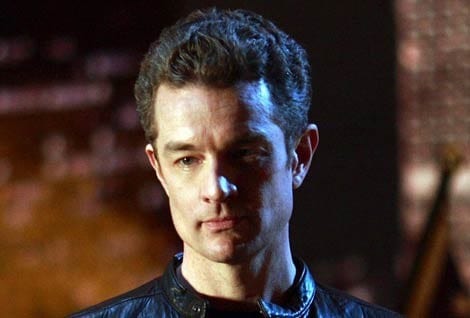 Brainiac is one of the dangerous characters and what made him dangerous was his intelligence. Brainiac made by Kryptonians as a supercomputer who can form as a human. He's cunning and manipulative which he fools Clark to believe that his birth father, Jor=El was the reason his planet was destroy and Zod was their hero. He causes destruction in Smallville and Metropolis by taking out the electricity power. He put Lana Lang in a coma and took over Chloe Sullivan's mind. He seems not to ever die as he keeps reforming himself. That what makes him dangerous.

Jack Bristow has shown at times that he is one of the dangerous men on TV. Jack is an expert in hand to hand combat and has tortured people before which he did for SD-6. Jack is also overprotective with his daughter Sydney Bristow. He has intercepted protocals to save her while she was undercover as a double agent. He even killed or sacrificed people to save Sydney. That's why Jack Bristow is dangerous.
These are the most dangerous men characters on TV shows that I know about.

The Most Beautiful Women Of All Time
648 item list by G̲lσb̶∆L J̅∆zZ∆l!s̲↱
53 votes

Most Dangerous Countries According To Global ...
25 item list by Milena
10 votes

He's The King by Goodboi

Give them a listen to by 13th moody grape

I Could Cut My Hands Slapping those cheekbones... by PotterGirl

My Favorite Actors by TheKnight12

Greatest Rivalries Ever on TV by TheKnight12

My Favorite Actresses by TheKnight12

TV Characters We Love To Hate by TheKnight12