Watched on the Big Screen! 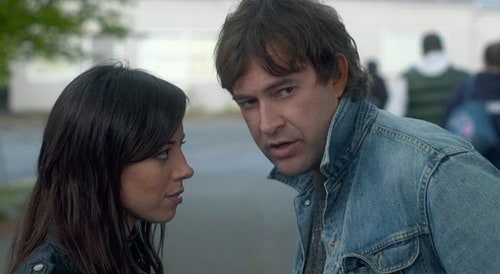 Charming, funny, romantic, magical, smart, original- there's no shortage of complimentary adjectives that one can heap atop this movie. Simply put, it's the most special English-language film to come around so far this year.

Stand-out performances from Mark Duplass and Aubrey Plaza and a screenplay that springs to life with cinematic playfulness. The story and plot revelations unfold perfectly and it seems that every creative instinct at work here is dialed in to perfection.

The ending has been the subject of some debate- for me it's the only one that fits and it's the one the film deserves. Go see this.
Xanadon't's rating: 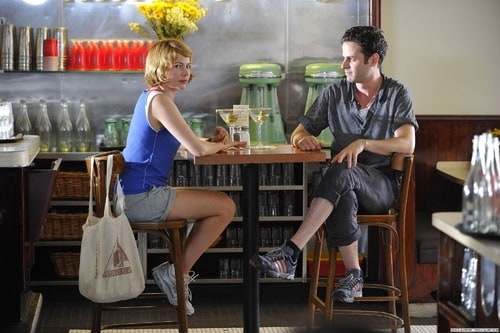 I thought this film had a lot working in it's favor, all the way up to the very end... and yet it left a bad taste in my mouth and it was never something I could truly enjoy.

Then again, Seth Rogen's character bored me, something about the other leading male actor annoyed the fuck out of me, and I mostly wanted to watch Michelle Williams get slapped by the end, so...

Blue Valentine worked for me. This didn't quite.
Xanadon't's rating:

Movies I wanted to see but missed during their recent theatrical run. Or random impulse rentals. 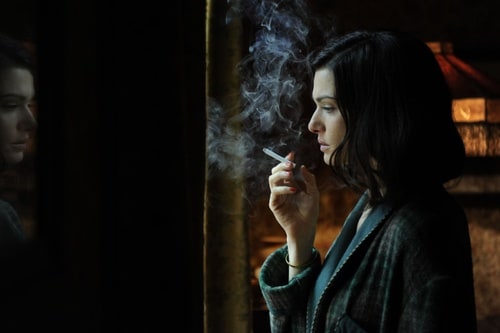 Beautifully shot, well-acted, and painfully slow at times. Now I'm not one to begrudge a movie simply for being slow. But in this case the problem is compounded by a sense of self-importance that left a bad taste in my mouth. At the half-way point I was impressed by a film that reaches into emotionally intimate places that few films of its kind bother to go. By the end I'd decided, "So what?". Too bad.
Xanadon't's rating: 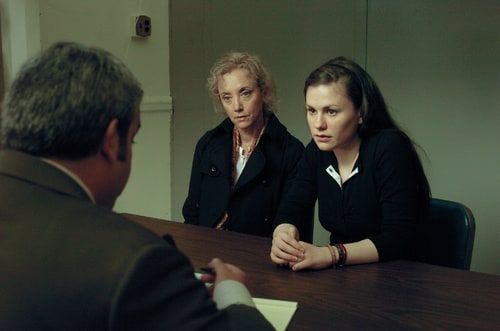 By the end of its long-winded 150 minutes the film devolves into such a hopeless mess of talky, unfocused storytelling that any strong points the film managed to notch along the way are left dulled beyond recollection.

This movie is one giant failure dressed up in a story that ought to have worked, if only the filmmaker had any semblance of control over his ideas and material. There are some nice ideas and moral quagmires at play here, but the end result is nearly unwatchable for all its unintentional melodrama punctuated by a never-ending string of boring shouting matches and laughable (non) editing. At last we arrive at a final scene that all at once made me want to puke, curse, roll my eyes, and applaud the fact that at least it's over.

You couldn't pay me to watch the 185 minute extended cut.
Xanadon't's rating:

Catching up with some of the movies I missed. 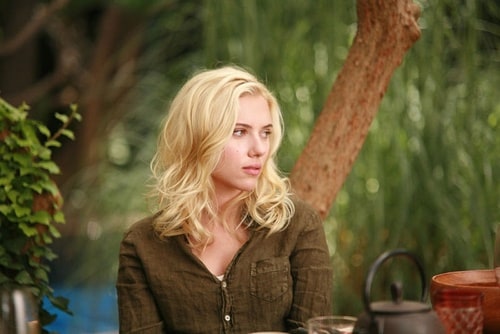 Oh Woody. How you continue to simultaneously impress and frustrate. Don't get me wrong- I liked this movie. Quite a lot, really. But it could've been Great. Or something close. Woody Allen seems to have an ability to capture wonderful moments between his characters in a way that's so effortless and instinctual. But here he has this lazy-ass way of structuring the whole project, relying upon an intrusive voice-over narration that weaves in and out of the entire picture, blandly stating things that ought to have been achieved in more organic, thoughtful, and meaningful ways. 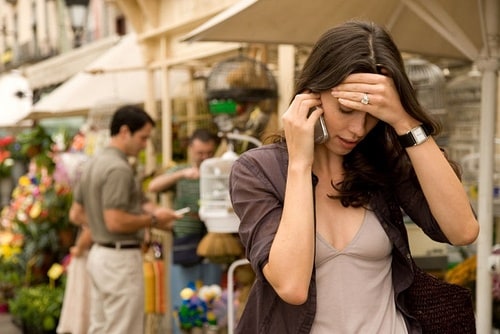 The problem I suspect is two-fold. First, Allen is overly in love with his own writing and sometimes this comes at the audience's expense. Second, the guy churns out a movie per year, every year, and too often takes short-cuts that he tries to disguise with glib wit and imitation-pith. I feel him doing it.

Still, we get some fantastic performances out of our four leads. Penelope Cruz is a smoldering hot and sexy train-wreck of a borderline psychopath by way of artist. Scarlett Johansson is somehow as purely beautiful as she's ever been, despite the unreasonable amount of blonde happening on her free-spirited head. She gives what could've been a stock character an easy grace and warmth that makes her charms all but impossible to ignore. Rebecca Hall's beauty is more of this world and if she doesn't exactly stand-out, it's mostly due to the immensity of talent around her. And Javier Bardem (you know him as the awesomely large and crazy fucking monster of a man killing machine in No Country For Old Men) is supremely effective in a tricky role that somehow insists on audience approval despite his sometimes uncouth approach to love and romance. Yes, a fine job all-around. 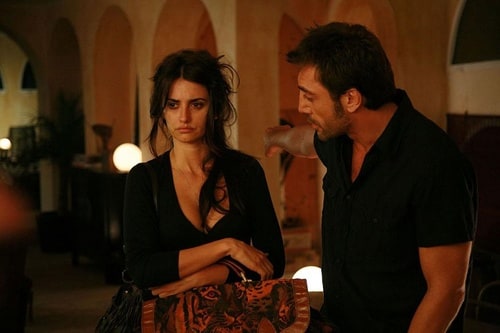 I really liked the movie's unfazed way of handling mess. There are tricky emotional, sexual, and otherwise romantic waters to navigate here, and the movie really hits certain strides where it can do no wrong. And then Woody Allen fucks up the magic.
Xanadon't's rating: 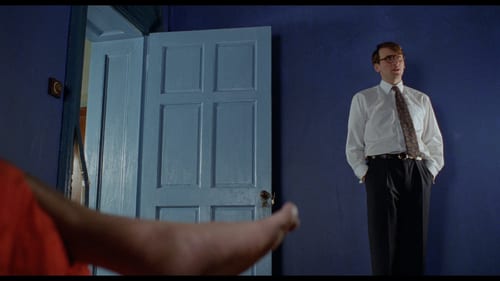 Can't remember the last time I watched a feature-length debut that so completely demonstrated the style, vision, and tone that would follow the director in question around throughout the next 15+ years of his career.

Boyle gives us essentially everything that makes him an exciting filmmaker, right here in his very first movie. Brilliant.
Xanadon't's rating: 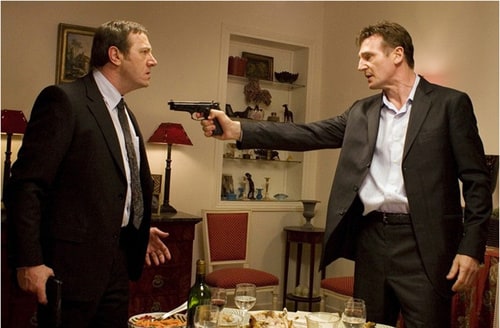 One of the most bloated IMDb scores I've ever seen. This is at best a thriller of the most average variety. At worst it's silly, weirdly exploitative, false feeling, and a basically empty and unsatisfying exercise of the "high brow" actioneer genre. Let's all take a minute to admit that "Liam Neeson" doesn't just automatically equate with "good". No, really. It's true.
Xanadon't's rating:

Where I see what all the fuss is about. 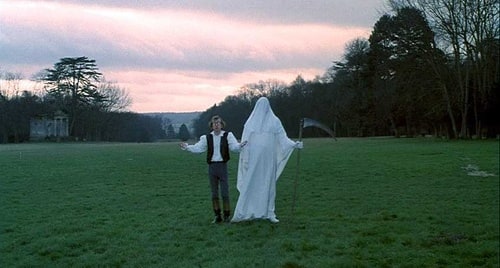 Woody Allen packs in jokes upon jokes in this sorta American version of Monty Python meets loose spoof/homage to Bergman cinema. Not everything here works, but most of it does. The movie is consistently amusing and at times laugh-out-loud funny.
Xanadon't's rating: 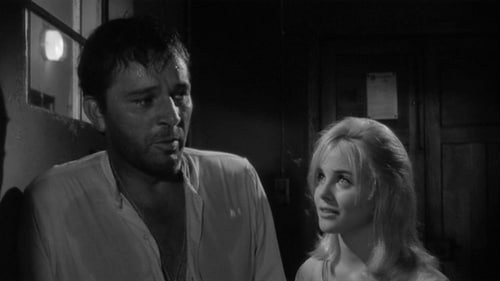 As far as I can tell this must be one of John Huston's most under-celebrated films. The whole thing is an impressive achievement, from the location shooting to the fully and wonderfully realized characters to the hilariously (often darkly) funny script that adds yet another dimension to the intricate story.

It's a great "dark night of the soul" movie and an impressive adaptation of one of Tennessee Williams' best plays.
Xanadon't's rating: 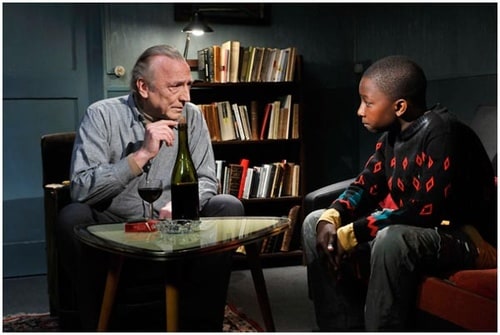 Nearly everything about this movie set in a small harbor-town on the north French shore has a vintage feel to it- despite the topical subject matter surrounding immigration issues. It plays like a cross between Italian neorealism and French New Wave Cinema, and the camera treats its setting and human subjects with minimal flair and flamboyance. The performances are strong- perhaps stronger than the characters themselves, as written- and there is a steady (I'm tempted to suggest sluggish) movement between droll humor and quiet sadness.

So what does this all add up to. A movie that critics universally admired, but one that I'm afraid never did much to shake me out of a listless and mostly unaffected viewing experience. Sure, there are moments to admire. But there's simply no way in hell I come back for seconds.
Xanadon't's rating: 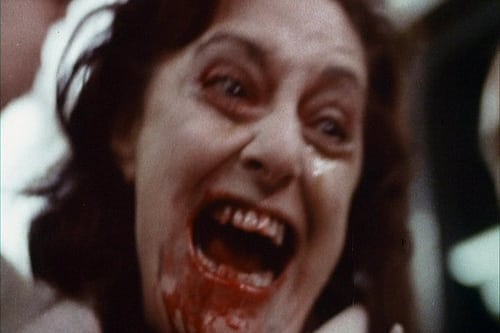 An early entry in the Cronenberg body-horror collection, Rabid impressed me as a film far ahead of its time, and one that really set the tone for much of Cronenberg's thought-provoking, cringe-inducing output. It's ambitious without being showy, works well as a blood and gore "Zombie flick" but perhaps even better inside its unknown epidemic/social upheaval dynamic.

Also we get a surprisingly strong performance from the film's lead, Marilyn Chambers, (know better as a leading adult-film star of the time) and in fact she's one of the driving forces that allows the film to become a good horror movie instead of a forgettable one. Go figure.
Xanadon't's rating:

6.9
Creature from the Black Lagoon 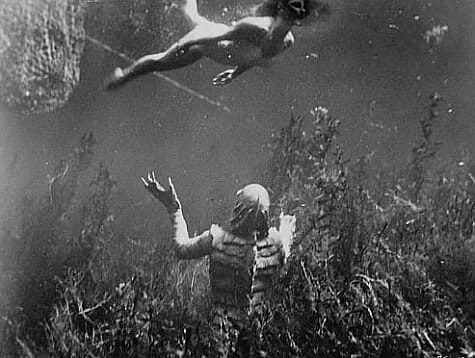 Extremely enjoyable and fun creature feature from the famed Universal Studios. This movie monster set the template for all kinds of horrific creations to come. The movie wavers between silly B-movie greatness and prime-time grade A entertainment and innovation. It's a delight.
Xanadon't's rating: 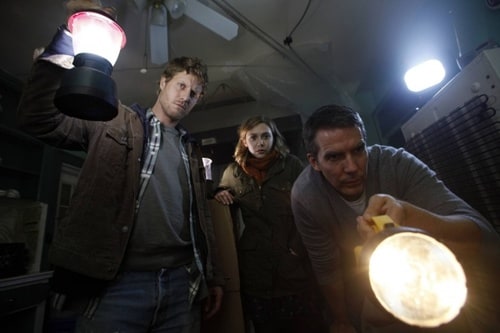 "Gosh, I thought we had a winning idea for a thrilling horror movie but on closer inspection this is fucking garbage."
Xanadon't's rating: 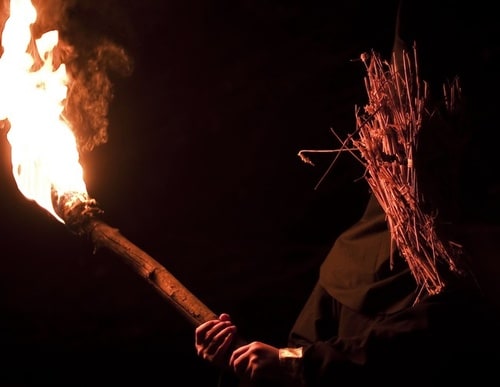 British horror/crime-thriller/black-comedy/marital drama/what-have-you. The kind of movie that I feel ten people could watch and you'd get 10 different ratings. Mark me down for a good old fashioned, middle of the road Two-and-a-half stars.

The movie calls to mind The Shining with the swelling music and title cards. Then toss in a bunch of smash-cuts, a la Breathless. Cap it off with some weird-ass... The Wicker Man madness. Yeah, it's all those things and more, and sometimes it feels very much like its own film. And I often had a more difficult time trying to understand what the fuck the characters were saying than I did trying to interpret the ending. And that's saying something.
Xanadon't's rating:

Round Two - Phase One: From the giraffe's Shelves 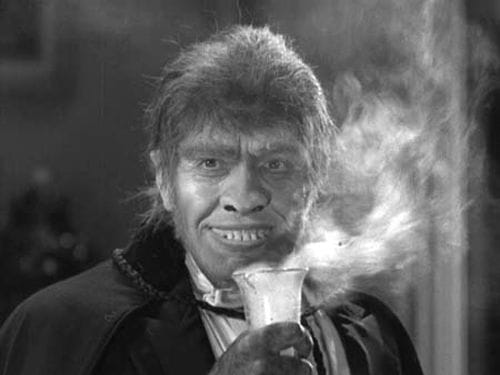 Far more impressive film than I would've guessed and punctuated by really nice and clever touches of cinematic inventiveness and creativity. The transformation scenes in the mirror are a treat. Also, the film is much racier than anything I can remember seeing from the era. All this combined to give this 1931 movie a remarkably modern feel. 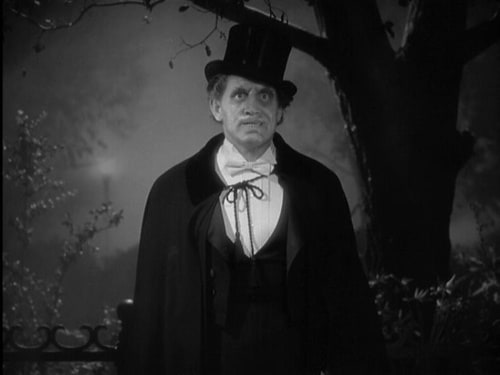 I actually like the 1941 remake every bit as much as the first one (possibly even more) if for different reasons. Whereas I admired the original for its seemingly groundbreaking achievements, I loved this one because it's just so damn much fun- and, by the end, scarier than any of the Universal Horror movies of its time.

I really enjoyed Spencer Tracy's character and performance as Dr. Jekyll, so much that Mr. Hyde really stressed me out at times. The guy's a total dick. And truly unnerving. The transformation from the genteel and charming Jekyll to the fucking asshole that is Mr. Hyde introduced much more discomfort than I would have ever guessed- and I found the film to be all the stronger for it.

Toss in a comical and lovable performance from Ingrid Bergman, a sweetly beautiful Lana Turner, and a solid and thoughtful (if at times over-earnest) script and what we have is the makings of one of the most satisfying, if under-appreciated, remakes of all time.
Xanadon't's rating: 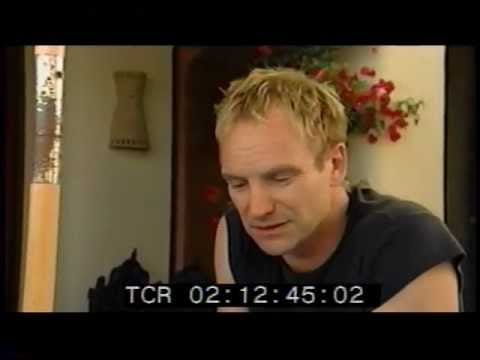 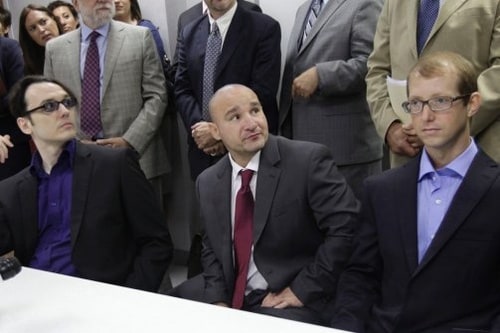 A satisfying cinematic conclusion to a great documentary series... though the same might not be said about the real-life final chapter to this troubling and fascinating story of the West Memphis 3.
Xanadon't's rating: 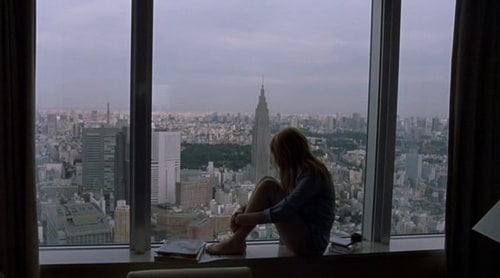 A movie I will always treasure. There's just a lot that I feel the movie gets exactly right. It reels me in completely every time.
Xanadon't's rating: 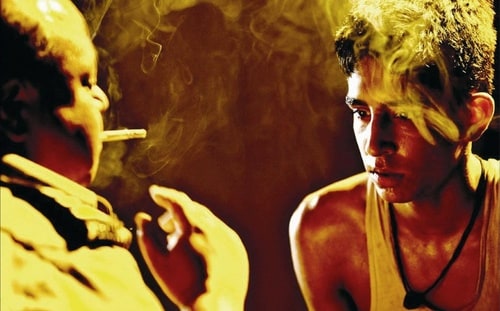 First time I saw this movie in the theater I was blown away. Oh yes, the movie relies upon a sorta lame narrative device to structure its story and yes it's essentially a rags to riches/boy-meets-girl fairytale. But when done this well, who cares?

Well this time around several little things bothered me about the film and took a lot away from my overall impression of it. I don't think it's something I need to watch a third time.
Xanadon't's rating: 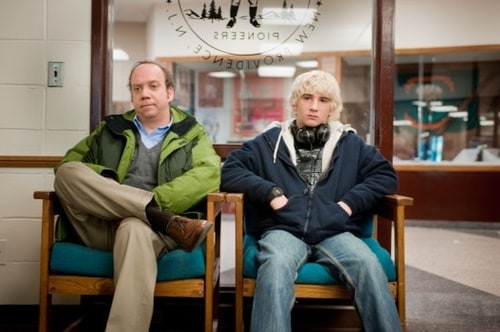 No, it's not the best film of last year. Hell, it's not even the best film by up and coming director Thomas McCarthy. But I love every ounce of this movie.
Xanadon't's rating: 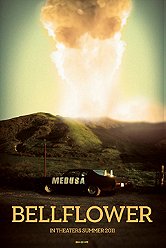 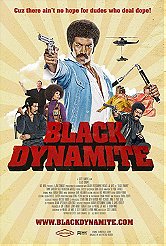 Lots of things standing in the way of a terribly productive movie month this time around. For starters, I was out of town at the beginning of the month. Then there's the fact that I'm currently in the arduous process of moving. And let's not forget, of course, the massive wrench that OLYMPIC FEVER can throw into a movie-watching schedule. Or any kind of schedule, really, when you've got it this bad.

But let's see what we can make of it anyhow.