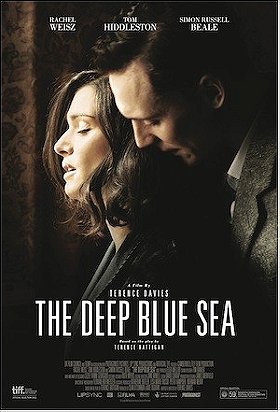 SJMJ91
3 votes
Understandably, one can totally confuse this British drama for a film about the underwater world and it’s features due to the description of the title (especially the 1999 film Deep Blue Sea), but the nature of the title definitely serves its definitive meaning within the film. Time and time again, we have witnessed these dramas involving traumatised civilians that take us on an emotional and th... read more

Noname
3 votes
A bit boring because I think the rhythm of the movie is very slow. But the ending is touching because my heart really broke when I saw Tom Hiddleston, a fabulous man shouting at Hester (which was like he was shouting directly at me) and I was behaving like Hester once. So, it really touched me.

JxSxPx
3 votes
It’s interesting to watch the 2011 version of Terence Rattigan’s play after having recently watched the 1955 one. Anatole Litvak’s version lacked a personal touch and much insight into Hester’s character, but it contains a great performance from Vivien Leigh. It’s compulsively watchable, but makes an odd decision to film such a quiet, intimate story with widescreen and Technicolor panach... read more
View all The Deep Blue Sea reviews

Libertine13 added this to a list 8 months, 2 weeks ago
Movies I skipped (597 movies items)

Stehako added this to a list 2 years, 10 months ago

Exclusive added this to a list 5 years, 3 months ago
My Favorite Actors: Rachel Weisz (19 movies items)

“To be honest, I had no idea what to expect from this rather obscure feature but since I have a weak spot for Rachel Weisz and Tom Hiddleston, I thought I might as well check it out. Well, eventually, I really had a hard time to care about the damned thing. First of all, this movie was another example that a random chronology must be one of the of the most annoying gimmicks because it is very often used only to make a story look more complicated that it actually is. In this case,  during the first half, I was really wondering where the story was getting at with these jumps back-and-forth but, at the mid-point, it finally became crystal clear what the hell was going on. Basically, it was about an attractive but really neurotic woman who married a rich but boring man and fell in love with a ” read more

johanlefourbe added this to a list 5 years, 10 months ago
My Queue (400 movies items)

LBKitty added this to a list 6 years, 2 months ago
Freaky/Spooky Watchlist (A touch of madness) (2723 movies items)