The Great Characters of Sin City

A good-hearted 60-year-old ex-con/ex-cop who, ironically enough, has a rather severe heart condition. Hartigan was one of the few honest and honorable cops on the Basin City Police force. On his last night on the job he saved Nancy Callahan from being raped and murdered by Roark Junior when she was 11 years old, only to be framed and imprisoned for the crime himself. He has a distinguishing scar on his forehead.

a tough, violent, big bruiser of a man, who has an uncanny athleticism along with a lot of power, spends his time on the streets doing odd jobs for various people. He is described as an "over the hill do-gooder" by several people, and often admires long overcoats. He suffers from an unknown mental condition (most likely some form of dementia) that causes him to, as Marv describes, "get confused." This condition seems to involve Marv's experiencing short-term memory loss and possibly hallucinations. Lucille, his parole officer, supplies Marv with medication to control these effects of his condition, though he doesn't seem to be supplied with anything that would curb his violent nature.

a private eye who, recently bestowed with a new surgically-reconstructed face, is deeply in debt to the women of Old Town and will go to great lengths to help them out. Dwight is highly intelligent, as well as a skilled marksman. Elements of Dwight's personality and of the stories which feature him prominently frequently evoke other hardboiled figures common to noir, crime and mystery fiction genres.

He is Shellie's abusive former boyfriend. Miho kills him and his four buddies after they threaten Becky with a gun. His spirit later haunts Dwight's imagination, and his murder is what precipitates 'the big fat kill' of the title. Despite his blatant alcoholism and abusive behavior towards women, Rafferty is a well-respected hero cop, having ascended to the ranks of Lieutenant. He was given the moniker "Iron Jack" by the newspapers.

A shadowy, poetic freelance assassin who performs a lot of jobs for the Ladies, the Cops and the Mafia. Enforcer for Wallenquist. He trains and co-ordinates assassins, and is one himself at some point. He runs an organ harvesting ring as well as other ventures in organized crime. His operations are eventually shut down by the Basin City Police in a sting operation and he is captured and shot by Commissioner Liebowitz after mouthing off to him. It is assumed he kills Becky at the end of the movie adaptation

mute serial killer who resides at "The Farm", a shadowy retreat owned by the powerful Roark family. Though he is never shown speaking a single word, his erstwhile protector Cardinal Roark claims that he has the voice of an angel. He kills prostitutes, mounts their heads on a wall like hunting trophies, and cannibalizes their remains, giving the leftovers to his pet wolf. He is sheltered by Cardinal Roark, to whom he supposedly confessed being tormented by guilt over his crimes. Being close with Cardinal Roark, he is also well known to the family and is good friends with Roark Junior. He appears as a small, shadowy figure with occasionally glowing glasses and razor-sharp fingernails that he uses as weapons. Kevin is preternaturally quick and silent, and ferociously skilled at martial arts. Marv laments that Kevin is the only person to have ever successfully snuck up on him, and is also the only person to successfully beat him in single combat; Marv only defeated Kevin in the rematch by luring him in close and handcuffing himself to Kevin so that Kevin's trademark speed is useless.

That Yellow Bastard, is the son of Senator Roark. He is handsome, young, and rich; he is also a sadistic child molester and serial killer who rapes and murders prepubescent girls, a pastime covered up by his father and the Basin City police. In That Yellow Bastard, Hartigan shoots off Junior's left ear, right hand and genitals while rescuing an 11-year-old Nancy Callahan, and Sen. Roark pays millions in physical rehabilitation treatments to rebuild him. Due to these treatments, however, his body cannot process waste properly, resulting in his skin turning bright yellow and making him smell like rotting meat. He finally meets his end when Hartigan stabs him in the gut with a switchblade, castrates him again (this time with his bare hands), and proceeds to pound his head to a pulp.

Hartigan’s partner in That Yellow Bastard. Betrays him and later regrets it. 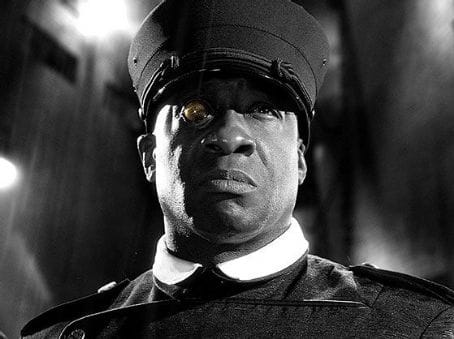 A huge African American man, typically dressed as a valet, who is very gentlemanly and polite in all situations. 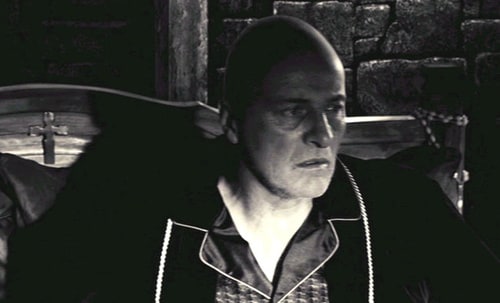 a Catholic Cardinal, is brother to Senator Roark. Roark occasionally uses Kevin (who is akin to a son) as his personal assassin, and even joins him in his cannibalistic rituals. He's killed by Marv in an unspecified (but implied to be extremely gruesome and painful) way. 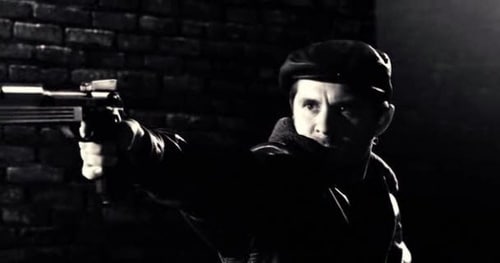 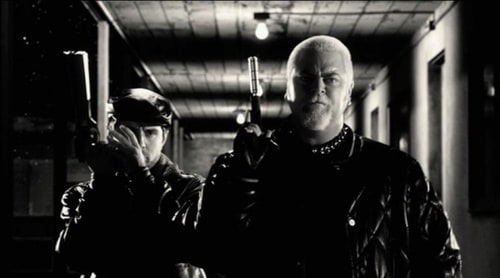 A pair of low-rent hit men with "delusions of eloquence" who use pretentious, pseudo-poetic words (sprinkled with malapropisms) in daily conversation to mask the fact that they're both incredibly stupid and incompetent at their chosen occupation. Real names are Burt Schlubb (Fat Man) and Douglas Klump (Little Boy). 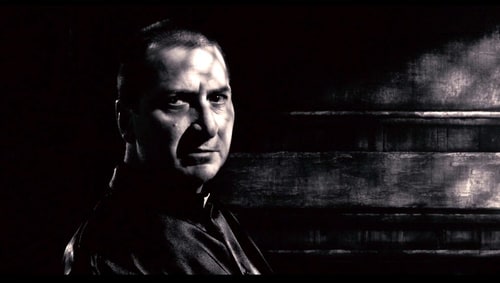 A priest who is the final link in the chain of people who attempted to put a hit out on Marv. He reveals that it was on the orders of Cardinal Roark, at which Marv initially scoffs. The Priest instructs him to investigate the Roark farm, and to ask himself if the corpse of a slut (Goldie) was worth dying for. Marv puts three bullets in his face, reiterating that she was "worth dying for. Worth killing for. Worth going to Hell fo 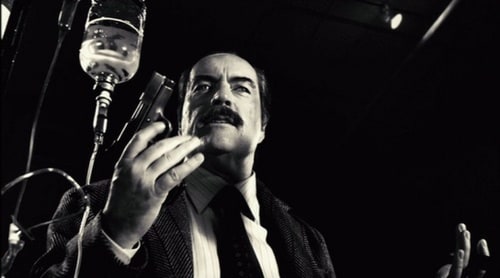 A corrupt politician with huge political and financial power; he has the influence to eliminate whomever he chooses. He even beat his own wife to death with a baseball bat, leaving his fingerprints all over it, and blackmailed someone else into confessing. His son is Roark Junior. He hushes up Junior's crimes by threatening to kill Hartigan's family if he doesn't confess to the murders Junior committed. The Senator's brother is Cardinal Roark.

Irish mercenary, as well as a demolitions expert and enthusiast. Was going to deliver Jackie Boy's head, when Miho sneaked up behind him and stabbed him. 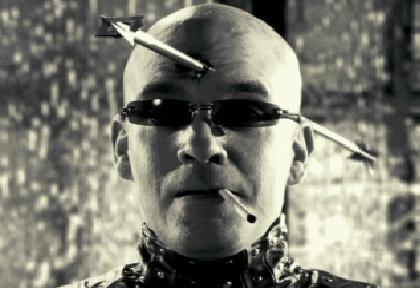 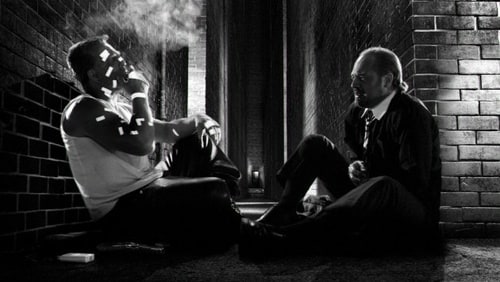 A hitman who tries to bring Marv in. After taking a shot in the belly and the groin, he surrenders the identity of his benefactor, only to be killed and robbed of his 'damn fine coat'. 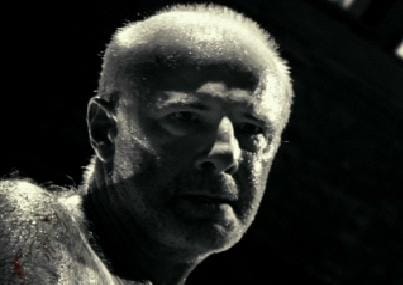 Commissioner of the Basin City Police Department. Brutally beats Hartigan upon his arrival in prison, and later is a puppet for The Colonel in Hell and Back. After his family is threatened, Liebowitz finally kills The Colonel. 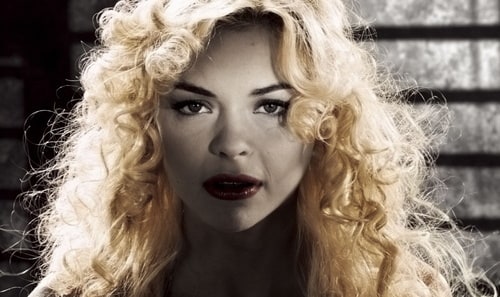 The twin prostitutes who are currently in charge of Old Town. Whilst little is revealed about Goldie initially, and indeed the resemblance between the two is so uncanny that even Marv is fooled upon first meeting Wendy, he surmises that Goldie must have been 'the nice one' after taking several beatings from Wendy, (who had thought him responsible for her sister's murder at the beginning of The Hard Goodbye.) However, once Wendy comes to understand Marv's motives and intentions for his quest, and the lengths he will go to see them through, she softens to him, becoming his helper throughout The Hard Goodbye. Wendy is the last visitor Marv receives when captured, and she spends the night with him. She tells him that he can call her by her sister's name that last night. They likely make love although that is never shown. After Marv is killed she is never seen without his crucifix around her neck.

A beautiful young woman and one of the many targets of the Salesman. Seemingly hired the Salesman to kill her, although he never found out whom or what she was running from.

A barmaid at Kadie's. She is Dwight McCarthy's occasional girlfriend. On the night that John Hartigan found the fully grown Nancy at Kadie's bar, she took a drunk and depressed Dwight back to her place out of pity. By The Big Fat Kill, they appear to have reconciled. At times, she isn't too bright, especially towards drunken, sorrow-filled men. However, she also has some brand of courage in her, talking back to her abusive boyfriend 'Jackie Boy' when he and four of his friends force their way into her apartment and refusing to call her friends for him.

Marv's lesbian friend/parole officer and Hartigan's lawyer. Preyed on by Kevin- who makes her watch as he eats her left hand- and afterwards gunned down by police to cover up Cardinal Roark's proclivities with Kevin.

a young Old Town prostitute who is instrumental in getting Jackie Boy killed by Miho. She also works for the Colonel as a spy, mainly because she didn't want her mother to discover that she was a prostitute, partly because he offered her a considerable sum of money and a new life. Killed during The Big Fat Kill. In the epilogue of the movie adaptation, in a scene that is not part of the comics, it is implied she is killed by the Salesman while leaving the hospital.

Often referred to as "Deadly Little Miho" by the narration, is a highly skilled, rollerskate-savvy assassin who serves as an enforcer and defender of Old Town. She is very silent, and she never speaks a word. Among her arsenal are twin katana samurai swords, throwing stars in the shape of a Manji, and a Mongolian-styled longbow. She owes a debt of honor to Dwight for saving her life, and he is the only male she interacts with on a friendly basis. She is especially sadistic if the opponent uses anti-Japanese racial slurs. Frank Miller considers the character to be a "supernatural being" of Sin City that characterizes a "good demon 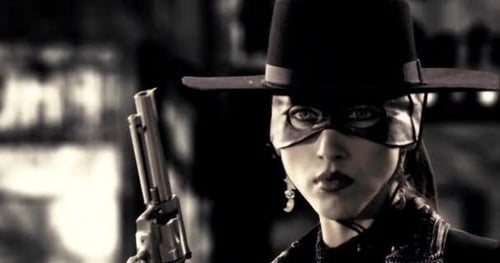 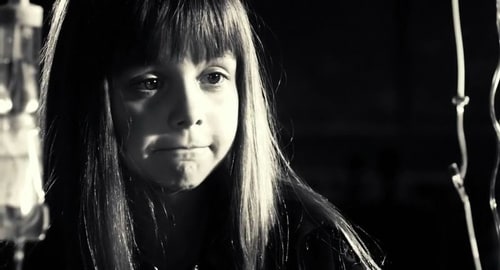 Want to read by Maary

The Evolution Of Harrison Ford by Michael M

These Pictures Deserve Votes by drugs

Dwayne "The Rock" Johnson Films: Ranked by The Cinephile

Films Watched in 2014 by cintamani

Star Trek: The Next Generation Cast Members by Rylvan

10 Movie Chicks That Would Kick My Ass by jay-jay

Queens of Disguise (Women with many faces) by SFG¿mystic

The Evolution of Casey Affleck by SFG¿mystic