6.2
Cold Prey 2 (2008) (2008)
Okay, as I said in the side description, I'm not that big of a fan of slasher flix. So it's rare that I like one (the ten listed here are the only ones that I can watch). What's even more rare is that I'll like a slasher flick sequel.
I enjoyed the first Cold Prey enough to see why it was such a surprise success. This 2nd installment, made more as a result of that the first one did so well (as opposed to a story that had always been planned to be made as a series from the start), follows the standard of other sequels that came from unexpected successful movies; it's not as good as the original. However, because it was somewhat willing to venture outside the formula it's predecessor, it felt more as an extension of the first film and not simply as a xerox-copied script hoping to just lazily cash in.

7.2
Scream (1996)
Just when it seemed like the concept of the slasher horror flick had been done to death, to the point where the genre was finally presumed to be deceased,
along comes Wes Craven's Scream. It was an update to the genre that revealed that the murdering masked megamaniac is not so easily slayed.
Unfortunately, on the flip side, the sequel to this film is also what began the massive resurgence of the endless multitude of horror sequels that tend to crank themselves out in numbers more than the body count of victims.
The slasher franchises have suffered from such an over-used formula, that, when a feature like Scream comes along, with it's twist of self-reference and send-up, it has a feeling as though there is now new blood to be vigorously spilt. 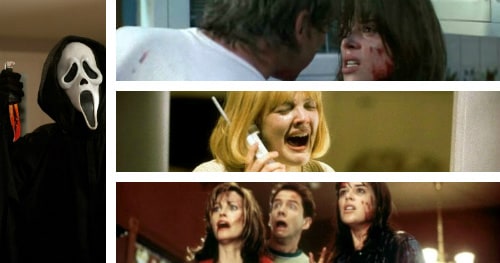 6.8
The Devil's Rejects (2005)
Ever since the first Texas Chainsaw Massacre back in 1974, there have been a certain type of subhorror slasher-family flicks that have since tried to match the bar 'o' evil that was raised by the original Leatherface Clan.
While Rob Zombies' creation of Captain Spaulding's kith and kin, IMO, doesn't quite match up to the legendary status of TCM, it's was still a worthy effort to the genre.

Even though, this type of straight for the jugular scare-fare usually isn't my cup of tea (or in this case, my "slice of milk"), Rejects succeeds as a dark ditty of deviltry about a family of hellbent hillbillies that makes even Lucifer hisself go "Damn....! These ratchety-ass rednecks are just plain downright evil.....!"

7.2
Sunshine (2007)
Considered by many as the underrated film of 2007, Sunshine is a eco-conscience sci-fi film that by the third act, turns into an outer space slasher flick.
Now while this film is not perfect by any means, I still like the attempt of the premise, the depth of the visual design, and overall just the pace of the story as it unfolds.
So I guess I fall onto the side of those viewers who I would've liked to have seen get wider recognition than it originally did.
It's kinda feel sad that the only people who experienced any light from Sunshine were the characters that were in it.

Alice, Sweet Alice is a movie that was fortunate enough to have come out when it did.
At the time, the genre of the slasher flick hadn't taken root yet.
Therefore, sexual boundaries had not yet been set as to what gender one must be in order to establish one's as a murderously relentless, knife welding, masked maniac.

And even though we do see the occasional feminine face lurking behind a bladed weapon aimed at carving it's fair share of cadres of corpses, in today's world, the slashing game still seems to be mostly a boy's club.

6.3
Cold Prey (2006)
A Norwegian-speaking cabin in the woods type of flick that follows the formula of the more well-known american franchises of the Freddy Kruger/ Michael Myers variety. Except, instead of a cabin, it takes place in an abandoned hotel. And also, the teenagers that terrorized by knife wielding slashmaster (a mountain man in this instance) are not so much in the woods as they are in the snowy mountains of Jotunheimen.

6.2
After Dark Horrorfest - Frontier(s) (2008)
Let's talk gore shall we?
James Cameron once said" You don't create fear with gore. You create disgust. It's a whole different emotion."
Therefore,
for the longest time,
I truly believed that, try as I might, I just didn't like gory horror films.
Then, after I watched Frontier(s),
I realized that I was wrong.
What it actually was that I didn't like was gory horror films that had no or very little story.
For so long, it seemed like frightfest filmmakers were cranking out so many flicks that compromised the story for the sake of the blood and gore,
that it seemed like all movies of this kind were only capable of featuring broken plot-lines that, at best, were usually as splattered as the "special" effects that are were gooey center of this particular sub-genre of horror.
Glad to see that after watching Frontier(s), this was a case that proved that stereotype to be wrong.

While Texas Chainsaw Massacre introduce us the idea of an unstoppable masked maniacal force intent on making all mere mortals that it comes upon into it's chopped sushi bitch, Halloween introduced us the formula of this theme before it became formulaic. And also before the formula became stupid.
Pay attention to the handling of the characters, the situations of each victim and even the simplicity of the musical score, and you'll find that even though this film requires the usual suspension of belief that is needed to swallow the outrageousness of this genre, Halloween does not require that you hide your intelligence too much behind any kind of William Shatner mask in order to enjoy it.
Which is why, even though I'm not a big fan of the way the slasher genre is handled these days,
H-1 still is and always will be a classic for me.

8.5
Psycho (1960) (1960)
Due to the era that Psycho was released, Norman Bates may not have had the opportunity to cut through a swath of teenaged bodies (not that most teenagers back then didn't deserve it) in the manner that the Freddies, Michaels and Jasons do these days, but he definitely pioneered the crazed, almost supernaturally-empowered maniacs that the modern masked contemporaries have become famous for.

Though the datedness of this movie has seemed to lessen the shock and horror of this b/w classic, the energy of it still reverberates today and the final shot of Norman Bates' visage is still one of the best creepy endings on film.

As someone whom is often very frustrated with most horror flicks, I was very pleased that this movie's plot-line came off as very genuine. While most slasher flicks tend to make it's audience yell things to the screen like "Idiot! Run outside, not to the upstairs!" or "Don't go in there, you moron!", this movie actually made the situation of the onscreen victims seem logistically believable. Therefore, their fright and inevitable demise doesn't come off as deserving as the mindless teenage victims featured in other films, who make the viewer feel that their stupidity justified their grisly end. The intent of TCM's story was aimed more at making the observer feel the fear thru the fright of the victim, not just thru the singular idea of a mad demonic slash-object-wielding maniac.
Favorites films about those who slash. 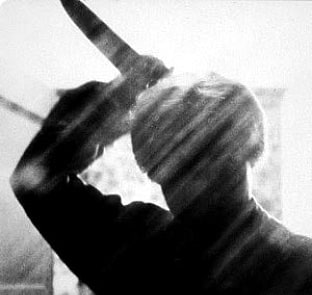 I'll be honest here,
while I'm a big fan of the horror genre,
I've never been a big fan of the subhorror category known as the slasher flick.
While I understand that most genres have their limitations, slasher films, to me, seem to take the least amount chances , particularly in the aim to stretch out their boundaries a bit. Also because not since the Kaiju and the zombie films of the 60's & 70's, have films I noticed a type of cinema that has relaxed itself in terms of story quality. I just don't think that the writing in most of these films is very good.
And sometimes, it's just that the slasher figure, in my eyes at least, appeared to have evolved into cartoonishly violent characters,
or they're like zombies, they're all basically the same. Other than their weapon of choice and/or their themeatic "mask", there is no real distinguishable features to their character.
Hopefully, this'll explain why iconic staples like Freddy or Jason do not appear on this list.
With all of that said,
there are a few that I do like. I could explain why I consider these certain titles to be more watchable than most, but I think there are a couple of enrtries whose descriptions boxes do that well enough.
Finally, even though I haven't seen that many teenage-mangling titles which would allow me to make this a longer list, I do like the current trend of rising quality in horror films. So I'm hopeful that eventually, future efforts in the subgenre will lead me to finally say that as a fan of the slasher flick, I'm pretty hardcore.

- The Rental
- Scream 2
- Sint
- Hush
- Sleep Away Camp
- Behind The Mask: The Rise of Leslie Vernon
- Severance

My Top 20 Halloween Favorites: From The Depths
20 item list by The Mighty Celestial
13 votes

the giraffe's favorite zombie movies by the giraffe

The Team to Really Save the World from Zombies! by Felipe Unger

Movies I Like That Everybody Else Doesn't by DevotedIdeal

My Top 20 Halloween Favorites: Ghosts by The Mighty Celestial

My Top 15 Halloween Favorites: Werewolves by The Mighty Celestial