Waayy back in 1910, Thomas Edison's Edison Studios produced the first film version of Victor Frankenstein's Monster.
Back then, the average running time for these new fangdangled movie pictures was about fifteen minutes (with this one going for a full minute longer than that....talk about getting your money's worth).
Needless to say, by today's standards, the special effects and make-up jobs look like the kind you'd see at your niece's or nephew's high school play.
And even though this earliest of efforts featured a monster that appeared more like a long-haired electro-shocked mad-asylum escapee that comes off much more as comedic compared to the famous clog-stomping, sport-jacket wearing hammerhead that would become one of the most enduring icons of the horror genre, the look of Franky's premiere on the "big" screen was still considered pretty big time back during this time of the 1900's first decade.
Rate:
Watched Wanted

Actually, truthfully speaking, while I'm a big fan of Universal's Frankenstein franchise, this is the first of the sequels where the decline in quality begins. A big sign of Hollywood's slacking off on the series can be seen on the make-up job of the monster's head and face. The attention to detail of stitches and scarring is barely evident and comes off much less gruesome, not to mention, not as fearsome as the movies that precede this one.
Rate:
Watched Wanted

7.5
Abbott and Costello Meet Frankenstein (1948)
One of the earliest "Monster Mash-ups" I saw as a kid on a local TV frightfest show called "Creature Features". I remember my older brother telling me right before the program started that just because this is called "Abbott and Costello Meet Frankenstein" the truth was that all three of the Universal Monsters Top Trio of Terror, Franky, Dracky and Wolfy, would be making an appearance throughout this film.
To which I had to inquire "Cool. Who's on first?"

In this particular Frankenstein movie, Doc Vic's creation enters the Toho universe and goes from being just a plain ol' human-sized Frankenstein's Monster to becoming a giant several stories tall Frankenstein's Kaiju Monster. Well, at least, in his heart he does.
And here's the spoiler alert part; despite what the movie title suggests, Frankenstein doesn't really actually conquer the world. But at the height of 300 feet, he does end up covering a lot more landscape than before.
And in keeping with the theme of mashing up the madcap with the macabre, Mary Shelley rolls over in her grave.

7.1
The Monster Squad (1987)
Count Dracula is looking to become king of the world. And not in that Titanic sort of way, either. The Baron Of Bloodsuckers wants to plunge the planet into eternal darkness, but in order to do so, he seeks to round up a "universal" band of fellow creature colleagues to make his dream come true.
However, when it comes to the Frankenstein Monster, he/it proves that, contrary to his/it's reputation of being a composite corpse of evil, he/it has a heart of gold.
And when you think about it, isn't that enough of a plot description for this fear flick to make any fan of Franky-Mon want to go and see it?

7.1
Hotel Transylvania (2012)
So, completely opposite to the film previously mentioned, in Hotel Transylvania, Count Dracula is a nice guy. As a matter of fact, he gets along with all his fellow classic creatures so well, that that the "Baron Of Bloodsuckers" now runs a hotel specifically created to cater to them and their specific "nightmarish" needs. And, in keeping with the theme of this list, who's the Count's long lost best friend, none other that the Monster Of Frankenstein, himself.
Truth be told, the story in HT isn't exactly up to highest level of wit and whimsicality that we've become spoiled to with many of today's CGI animated flicks, but for me, it's still great to get any kind of modern depiction of the Universal Monsters with the kind of cool, crisp computer technology of today.

7.9
The Spirit of the Beehive (1973) (1975)
The year is 1940, and a traveling movie theatre has just shown the film version of "Frankenstein" to a small village in Spain (which has just started recovering from it's recent civil war). Transformed by what she sees on the screen, young Ana, along with her sister Isabel, becomes determined to search out this "spirit-monster".

The Spirit Of The Beehive is a really good arthouse film that refrains from getting too artsy so that it's story doesn't stray too far off it's rails. At the same, it's unique use of the "spirit" of the famous stitch-headed monster as a metaphor of childhood fascination distinguishes it's premise, at least enough to separate it from the average, standard movie fare.
Rate:
Watched Wanted

7.1
The Curse of Frankenstein (1957)
Back in the 1930's and early 40's, it was the power trio of Frankie, Wolfie and Drackie that made the Universal Monsters so universal. But by the late mid 50's, it seemed that this "Triumvirate of Terror" had lost all bankability at the box office.
That is, until Hammer Film Productions decided to take a crack at it.
And with their distinctive brand of visceral storytelling and Gothic cinema, they sparked up a lightning strike that forever forged their name into the history of horror and showed that the curse of Dr. Frankenstein's creepy creation was indeed, very much alive.

6.5
Frankenstein Meets the Wolf Man (1943)
In 1943, Universal Studios released Frankenstein Meets The Wolf Man, a film that is considered the first to actually team up two of the monster mainstays that will make the studio company famous (in the horror flick circle, that is). Its story is considered the sequel to the original 1941 Wolf Man and at the same time, the fifth chapter in the Frankenstein series.
And while it seems like it's the werewolf who experiences more development as a character, it's still cool to see that the creatures who have become staples in legendary lore of the scare flick are now sharing terrorizing tactics together in the same world.

8
Young Frankenstein (1974)
What is it that makes a young surgeon carry on the family tradition of creating a patchwork monstrosity of a menace that always seems to rile up the local villagers into taking up arms with their pitchforks and their torches and then, storming the castle?
Simple. It's in his blood.
Y'know....
as in a vampiric metaphor....?

Okay, okay,
I know that some of you out there would be quick to remind me that vampires are not the the central theme of this list. Frankenstein monsters are.
To which I can only respond "Actually, it's pronounced Frankensteen."

7.3
Frankenweenie (1984)
Tim Burton's very first film is a black & white feature which tells the macabre tale of how a pet dog is bought back to life by his child owner. After the bull terrier gets killed by a car (the leading cause of death amongst canines, after old age), the young lad decides to a take a page out of Mary Shelley's Frankenstein, and resurrect the Spuds Mckenzie look-alike through the use of electricity. I guess mad scientists have figured out that electricity is spark of all life.
But that's not the point. What matters is a boy and his dog.
A bond that not even the Grim Reaper can hope to sever.
Well....he can....
but still, through the use of love and, well...y'know.... more electricity...
and probably some string, I guess...
the boy and his dog will can never be separated. For long.

Though, now that I think about it,
when a kid's dog "bites it",
it seems to me that making a simple trip to the pet shop would really be a heck of alot easier than building a secret lab in the attic.
Rate:
Watched Wanted

Basically, it's the same story as the earlier one, just padded with alot more of cool and crazy homages to other horror genres in an over the top manner that is allowed in the cartoon world of stop-motion graphics. For my money, it all adds up as an excellent example of why Burton's preference for spookish cinematic subject matter is a more perfect patchwork combination with his own brand of stylish animation and tends to come much more alive than when he tries to film it in live action.
Rate:
Watched Wanted

7.1
Son of Frankenstein (1939)
The original Dr. Frankenstein may be dead, but his son, aptly named "Wolf", lives on. To continue the family tradition monster mayem madness.

Featuring not only the first appearance of the iconic hunchbacked sidekick named Ygor (notice that's the correct spelling is a "Y", not an "I"), but also some really cool angular backdrops, a one-armed inspector, and a laboratory containing a big pit of sulfur.
And lemme tell you something,
when it comes to literal foreshadowing, they don't get any deeper than a big pit of sulfur.

In this immensely successful sequel (one of the first to be so successful), the Frankenstein Monster learns to talk, smoke a cigar, and on a social level, put himself "out there".
Now while he and the Bride give a new meaning to the term "made for each other", for any few of you who've never seen this movie,
I won't spoil it for you by revealing whether or not she accepts his proposal or not.

Lest to say that the fact that the name the follow-up film to this follow-up film is Son Of Frankenstein bears no reflection to the outcome of this movie.
Rate:
Watched Wanted

7.8
Frankenstein (1931)
At the number ten spot, I mentioned how horrordom's most famous patchwork man debuted on film in back in 1910. produced the of.
Fast forward twenty-one years later, and we have the 1931 classic that features Victor Frankenstein's (or in this movie version, Henry) monster as the flat-topped heavy-browed stitchhead which has come to define the creature's appearance more so than that of what Mary Shelley described in her novel.
And even tho it has become sort of a comical look for modern audiences, back at the time of it's release, Boris Koloff's heavy made-up visage of The Monster was enough to scare the hell out of even hardcore horror aficionados.

But the main reason I have this movie at number one, isn't just cuz it's still considered the best of all of the Frankenstein Monsters, but also because the top three of the early Universal monster flix (Franky, Dracula and The Wolfman) have always been a regular staple on the television sets of The Mighty Celestial (my screename, in case you haven't noticed) household every Halloween night now for generations. Heck, probably even before television sets were invented.
For me, the night of All Hallow's Eve wouldn't be the same without the most famous of freaky flat-tops shambling about on the ol' boobtube.
Rate:
Watched Wanted 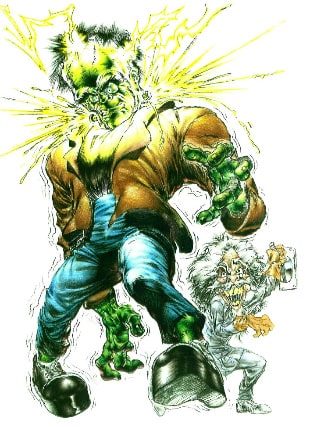 20. War Of The Gargantuas

17. The Nightmare Before Christmas - Dr. Finlkestein

My Top 15 Halloween Favorites: From The Depths
15 item list by The Mighty Celestial
12 votes

Best albums of 1993 by the giraffe

Brought to you by Stephen King* by Bad☆Alice