My Top 15 Halloween Favorites: From The Depths

5.8
Clash of the Titans (2010)
To be honest,
I haven't yet decided which version of Clash I like better:
the original 1981 version, which always held a sentimental spot in my movie-viewing heart,
or this new 2010 update, which adds a lot of the coolness factor into the creatures and effects that we wished for back when such technology wasn't so available, but also doesn't contain the heart or charm the the original did.
So for now, I'll lean more towards the remake basically for that one scene that every special effects fan has been looking forward to since this modern version was announced: "Release the kraken!" 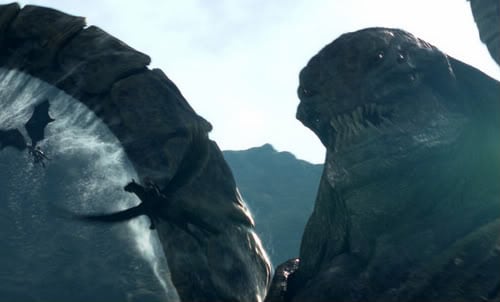 6.5
Star Wars: Episode I - The Phantom Menace (1999)
Growing up with the first three Star Wars movies that made up the original Trilogy, I, of course, was not a big fan of the later films. But, I was still able to enjoy the visuals of these new millennium flix, particularly, the diversity of kick-ass looking aliens and otherworldy creatures (my favorite aspect of the franchise, actually). And in Phantom Menace we have a brief appearance by one such creature, the monstrous, sea-dwelling Opee. Which, for me, despite it's short screen time, looks ferocious enough to fulfill the requirements of this list.

7.8
Titanic (1997)
Of all the from-the-depth horrors listed on this list, is there any that is as unfeeling, as unmoving, as cold as an iceberg?
Remember, the part of an iceberg that we see is just a small part of a massive structure that lies many depths beneath the water line. In other words, the part that's above water is just the tip of the iceberg, so to speak.
The dangerous part is the massive, jagged body that lies beneath. That's the part that can make even the most unsinkable oceanliner sinkable.
This movie, Titanic, is the movie that made me develope a lifelong hatred towards icebergs.
And just because the name ends with "berg", that does not make me, in any way, anti-Semetic.

6.9
Clash of the Titans (1981)
When you look at all the destruction and chaos that Zeus & Co. release down on our humble planet just outta petty jealousy and pride, it really reveals the truth behind the old saying, "The gods must be crazy".
While I'm not usually a big fan of movie remakes,
for me, the original Clash, is an excellent example of a classic that would greatly benefit from today's special effects technology.
I'd really like to see a lot of these old stop-motion flicks of yesteryear get the updated treatment that many of us as children could only dream of back when these films were first released.
But even with that said,
it doesn't change the fact that, as cheeseball as they were,
most of these ultra-fantasy originals will always hold a special place in my heart, basically just b'cuz they were a part of my childhood.
:o)

6.3
The Chronicles of Narnia: The Voyage of the Dawn Treader... (2010)
TBH, I found the first chapter of the Narnia film series to be much more entertaining and engaging than I expected, especially for a nonfan such as myself. However, by the time of the sequels came out, I did find them to be a bit overbearing with their messages of Divine Superiority.
However, Dawn-Treader had some redeemable moments that allowed me to endure the bits that bothered me.
One of those moments was, of course the really cool giant Sea Serpent segment.
From what I understand, it was much more fearsome than the source material. I don't know how or if that may have translated to the sensibilities of the hardcore fans, but for me, I just thought it was pure kick-ass.

6.2
Rogue (2007)
A crockydile has become large enough and clever enough that it has decided to go all rogue an' shit.
Soon, on the fresh waters of the Northern Territory, a small group of river riding tourists find themselves trapped on a island of mud, and then terrorized by this carnivorous, cravenous, clever killer croc.
Crikey.

5.7
Open Water (2004)
In certain spanish countries, this movie was called "Tiburones Muerden Buzos".
Which, literally, in english language, translates into "Sharks Bite Divers".
Which in shark language probably translates simply into something like "Om Nom Nom".

7.2
The Call of Cthulhu (2005)
I'm sure I don't have to explain who this creature is.
I mean, let's be honest here,
has there ever been a slimy public figure who was more of a bigger meme sensation on the world wide web than Cthulhu?
Oh,
okay,
maybe Chuck Norris.
But still,
no matter how much Mr. Norris likes to brag that he can kick anybody's ass, we all know that he wouldn't stand a chance against this guy.
Hell, even as an actor, Cthully can swim circles against the ol' Chuckster. And Cthulhu is just a stop-motion effect.
The truth is, no matter how much martial arts training Chuck-No has had, at the end of the day,
brass testicles just don't stand a chance against mass tentacles.

6.8
Dead Calm (1989)
A movie with a story involving a sinking boat with Billy Zane as a villainous villain who terrorizes another man's woman.
And yeah, while that may sound like a familiar plotline for a disaster at sea flick, the fact that the boat in question is no bigger than a tool shed and with no iceberg in sight, it becomes quite obvious that this is a film that was not directed by James Cameron.

And yeah, while there are bigger sea creatures on the other entries on this list, still, can you think of anything more creepier than fishing Mr. Zane out of the water?

7.2
20,000 Leagues Under the Sea (1955)
The film adaptation of Captain Nemo and his legendary underwater ship, the Nautilus, finally comes to shore in a very fitting manner, as the very first film ever to be shot in Cinescope.

For me, 20,000 Leagues Under the Sea is a movie that if it were just any sci-fi movie, would still be one the best sci-fi movies of it's time. But the fact that it was made by Disney, and comprising some of the typical "Disney conventions" (which I have to admit, I'm not a big fan of), makes it an even remarkable achievement for a classical pre-steam punk thriller.

5.9
Black Water (2007) (2008)
Hey, check it out,
if you look at the Australians movies released in the year 2007,
you'll notice that there's wasn't just one Aussie movie about a boating vacationeers being terrorized by a big ol' crazed, man-eating killer croc,
but two in the same year.
Seriously, think about it.
What are the odds....?

Actually, I liked this croc flick better than Rogue. Although I figure that the production costs of Rogue probably didn't break the bank, it's formula did follow along the lines of those that we see in the more big-budgeted type of films (including the idea of going a bit over the top with the croc's behavior).
On the other side of the river, Black Water's plot went more towards the kind that we find in more smaller budgeted horror films. Y'know, where the premise relies more on instilling claustrophobic fears that result from entrapment (like the protagonists were here, in the low-hung tree branches over the water).
And those are the type of scares that I much tend to prefer.

7.1
The Host (2006)
Chemicals get dumped into the Han River,
and several years later,
the result of man's disregard for the aquatic ecological balance surfaces in the form of a....a...
well, in this film they call it a host.
I say, it's more of a giant walking catfish with Olympic level gymnastic skills.
Whatever you wanna call it,
it's payback time for all the centuries that humans have been hoisting waterbreathing critters outta the water since back when we first learned how to bait a hook.
And as far as the Host is concerned, this is a case in which the law of catch and release does not apply. 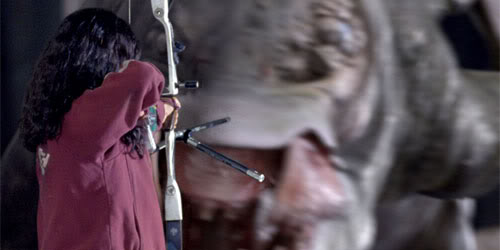 Okay, let's get the obvious part out of the way:
This sequel does not and never stood a chance of being comparable to the original.
However as far as sequels go (particularly at the time it was made, when most blockbuster follow-ups were rarely any good at all),
Jaws 2 didn't pretty well with what it had.
Suspenseful, thrilling, and a story that explained the coming of a second shark in manner that didn't insult the viewer's intelligence.
It may have not kept as many people out of the water as much as the first film, but with that lack of big backing from Spielberg that it had, it kept it's fair share of beach-goers dry.

at some point in life,
we're ALL gonna need a bigger boat.

Scariness from the sea (or at least in one case, from a lagoon....) 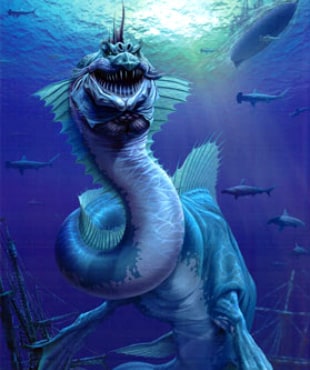 10 Reasons the Coen Brothers are Like the Beatles by blankend