7.4
Wallace & Gromit: The Curse of the Were-Rabbit... (2005)
Obviously, this isn't the standard type of werewolf flick that you'll see dominating this list. 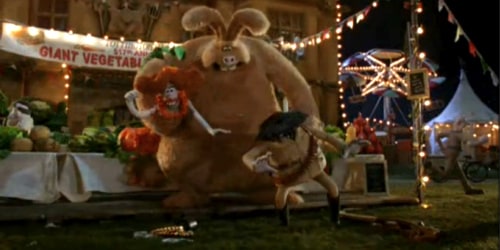 Okay, while Disney or Pixar don't ever have to worry about Aardman Studios ever taking any food out of their mouths at the box office, the truth is, I prefer their stuff better.
It's takes the lighthearted animation that currently crowds the movie theater industry today and adds British slant to both the dialogue and humor. Which tends to provide a nice little break from all that high-tech formula of the big boys, and a down-to-earthiness quality that's not found from Tim Burtons more macabre and zany-esque caricatures.
Even watching Curse Of The WereRabbit, their take on the werewolf lore, feels much more like a relaxing tea and crumpets afternoon at the cinema than a mega-merchandising spectacle that the DisPix people would have likely hyped it up into.

One of the earliest "Monster Mash-ups" I saw as a kid on a local TV frightfest show called "Creature Features". I remember my older brother telling me right before the program started that just because this is called "Abbott and Costello Meet Frankenstein" the truth was that all three of the Universal Monsters Top Trio of Terror, Franky, Dracky and Wolfy, would be making an appearance throughout this film.
To which I couldn't help but inquire "All three of 'em? Cool. Who's on first?"

6.6
The Howling (1981)
During one of the driest spells in terms of quality for werewolf movies, 1981 proved to be a good year for moonlit monsters. For it had not just one film that showed that the subject wolfmen made for good modern cinema, but two; American Werewolf In London and this one, The Howling.
And while Howling may not be as famous as American Werewolf for it's groundbreaking special effects depicting the transformation from man to beast, it still held it's own in helping to show that when it comes to depicting the horror of lycanthropy on the big screen, the myth of man-wolf was still a force to be feared and revered.

6.9
Les contes de la nuit (2011)
Here's a movie that's features a series of short stories, and while each one is in animated form, it's a form rarely seen on film, called silhouette animation. Now while Tales Of The Night may initially come off as sounding like a horror film, in actuality, it's not. Told as morale fables of old, each one is more like a tale with a "nightish" like quality to it.
The first one, coincidentally enough, is called "The Werewolf", and is about a troubled triangle of love that takes place in Medieval Europe. And what makes this triangle so troubled isn't so much that it's a triangle, but that, as the story title implies, the man in this ménage à trois of the heart transforms into a wolf at night.
Which, when you think about it, is something that any red-blooded heterosexual man would do when dealing with two ladies at once. Am I right, guys?

7
Ladyhawke (1985) (1985)
Almost a decade before Michelle Pfeiffer fell in love with Jack Nicholson as a werewolf in Wolf,
she was in another movie about lycanthropantic love, this time with black knight, Rutger Hauer.
So in my eyes, though she's shared her fair share of screentime with many a romantic leading man, as far as horror-themed hook-ups go, rugged Rutger will always be the manwolf to her ladyhawke.

7.9
Harry Potter and the Prisoner of Azkaban (2004)
As someone who had no real interest in this series or it's subject matter, it wasn't until this istallment that I finally watched a Harry Potter movie. And being that I never read any of the books, I was quite taken aback at the over-all consistency of balance between the fantasy element of the wizarding world and that of the personal struggles of what goes thru a young person's mind trying to deal with things like death, authority and finding one's place in the life. Compelling drama, a story-line that both successfully continues the series and yet also manages to stand on it's own, well-placed chemistry between the characters, medieval sets that visually stun, Dementors that horrify, old tree willows that whomp and even a werewolf that looks pretty damn bad-ass.
I walked into this film an indifferentiated non-fan and ended up coming out a hardcore Pot-head.

6.8
Trick 'r Treat (2015)
What do you get when you pack in a group of misfit zombies, a serial killing neighbor, a mischievous trick-or-tricking imp, and for the purposes of this list's theme, a coven of werewolves, all into one script?
A Jack 'O' Lantern filled candy-collection of quality, modern campy Halloween tales of the escapist-fare variety done right: With more focus on the quality than on the camp.

For me, this is a movie that does an effective job of capturing the feel of all those big budget horror flix that were released during the late 80's and thru-out the 90's. The kind that always frustrated me because their scripts rarely reached the level of their budgets.
Trick 'r' Trick comes closer to the type of fun onscreen fearfest that I would've like to have seen during that particular time of the horror cinema.

6.6
The Curse of the Werewolf (1961)
Back in the 1930's and early 40's, it was the power trio of Frankie, Wolfie and Drackie that made the Universal Monsters so universal. But by the late mid 50's, it seemed that this "Triumvirate of Terror" had lost all bankability at the box office.
That is, until Hammer Film Productions decided to take a crack at it.
And with their distinctive brand of visceral storytelling and Gothic cinema, they sparked up a lightning strike that forever forged their name into the history of horror and showed that the curse of the werewolf still had some serious bite to it.

7
Brotherhood of the Wolf (2001)
A really cool blockbuster epic from France that is half historic film, half horror adventure.
A beastly creature is terrorizing the locals of the southern French province of Gévaudan. But is it an actual werewolf of many a folkloric legend 0r just an oversized man-eating wolf?
There are only two men who can find out,
and one them is the dude who hosts Iron Chef America!
Not since the Wolf-Man took on Abbott & Costello has there been such a clash of legendary titans!

6.3
House of Frankenstein (1944)
In 1943, Universal Studios released Frankenstein Meets The Wolf Man, a film that is considered the first to actually team up two of the monster mainstays that will make the studio company famous (in the horror flick circle, that is). Its story is also considered the sequel to the original 1941 Wolf Man of Lon Chaney Jr fame. House Of Frankenstein is the chapter that follows FMtWM, and it offers up even more monster mash-up madness, despite the fact that ol' Franky takes top billing. And the reason I bring this movie up in this particular list is because, other than the first Wolf Man flick, I think HoF does the best in terms of focusing on the character of Larry Talbot, Wolfy's alter ego. It might be Franky's house that is the subject of the movie title, but the truth is, it's the werewolf's angst and desire for a cure (and for a little love, too) that seems not only to take up the most room of the stage center, but also is the most interesting part of the whole plot-line.

5.1
I Was a Teenage Werewolf (1957)
Hey, if you've ever wondered what a teenage werewolf looks like upside down, in a jumpsuit and wearing over-sized wax teeth,
then this is the film for you.

Before he made a name for himself in hit television shows such as Bonanza, Little House on the Prairie and Highway to Heaven, Michael Landon was just a teenager tryin' ta "make it in pictures". And one of his first film roles was in this horror high school flick, where he learns that when you're a teenager, having a few blemishes, some extra hair in places that didn't have hair before, and a rebellious nature, are to be expected.
The same too is expected if you're a werewolf.

And even though this 50's classic is still filled with it's fair share of angst ridden camp that is typical of this era, I still find it's campiness much more digestible than the more updated teen-howler, similar-themed Teen Wolf (with all due respect to Mr. J. Fox, of course).

6.8
Dog Soldiers (2002)
What do you do when the werewolves begin to attack systematically and in packs?
Send in the troops.
And then just sit back, and enjoy, as the bullets, blood, big booms and British accents fly.

There comes a time in every young girl's life when her body starts to give off signs that she's becoming a woman.
Or a werewolf.

7.3
The Wolf Man (1941)
Just a plain ol' classic, this one is right there. I am a huge fan of the first black & white Universal Monster series of way back in the day and 1941's Wolf Man is probably my favorite one of the mash. Even after all the breakthroughs that scary movies have made in the long span since this was first released, from my point of view, any datedness that may have resulted over time from these original gangstas of horror quickly fade under the integrity and the energy that was "eternally" captured during filming. 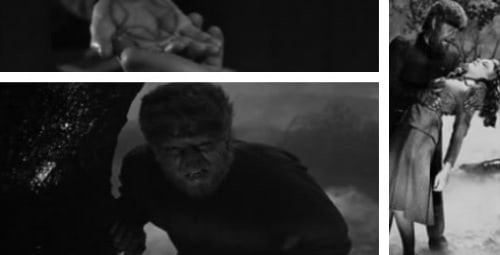 While the first two of Universal's mainstay monsters, Dracula and Frankenstein, were based off of books, the Wolf Man, like the Mummy, was not. It was strictly based off of the loose legend of the werewolf. And, Lon Chaney Jr's was not the first onscreen werewolf since six years earlier, Universal had released Werewolf of London. However, because of it's subpar performance at the box office, this British version of the lupine two-legger never got the chance to rise to the iconic status that Chaney's was able to achieve. Which I'm okay with despite the love that I do have for WoL.
This Wolf Man, made famous by the son of a thousand faces, will always be, in my eyes, the true face of the wolf that walks like a man. With his much furrier demeanor, more animalistic attitude, and his link to the legendary lore (although, much of that lore was made up for this flick and the ones that followed), this one fits much more effectively into the hairy toed shoes and the long lasting image that befits a luna lauding lycanthrope.

7.5
An American Werewolf in London (1981)
Before the lead character in this movie was a werewolf, he was a Pepper. And for some subliminal reason, that made me want to be a Pepper too.
(Sorry kids. I know that the majority of you most likely won't understand that comment, b'cuz it's before your time. If you wanna know what it means, just look it up on youtube. That is, if you don't wanna be left in the dark.
And believe me, you don't wanna be left in the dark.
Because, keeping in theme with this list, the dark is where werewolves like dwell.) 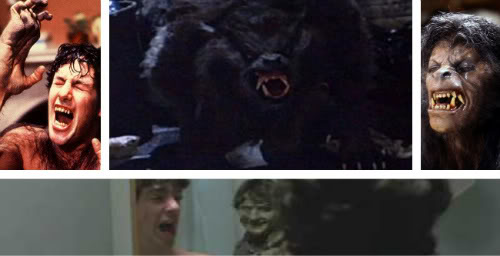 IMO,
the An American Werewolf In London is the best werewolf movie ever. 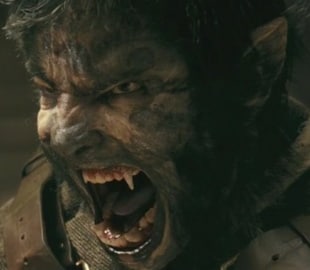 Even a man who is pure in heart
and says his prayers by night
may become a wolf when the wolfbane blooms
and the autumn moon is bright. 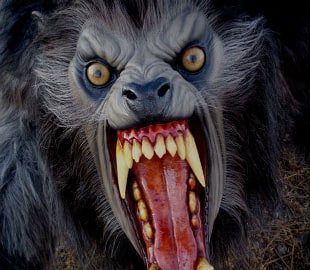 My Top 15 Halloween Favorites: From The Depths
15 item list by The Mighty Celestial
12 votes

I Would Kill To See These Bands/Artists... by Aaron M.

30 Days of Music by Orlok