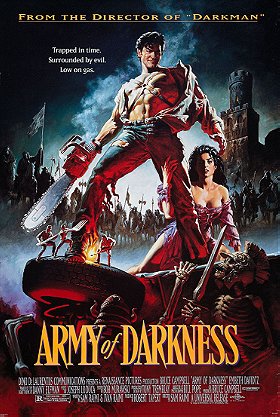 View all Army of Darkness lists 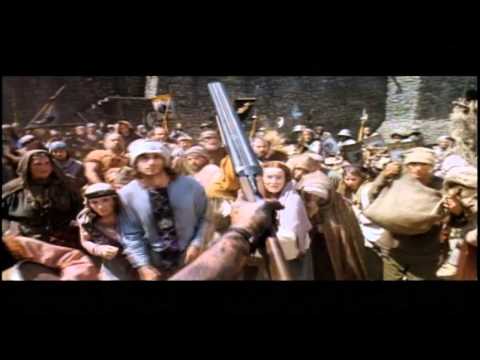 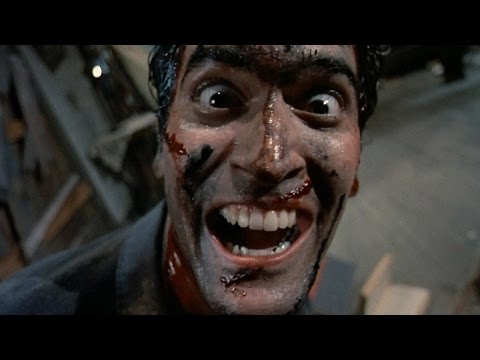 The Evil Dead in 5 Minutes (ish)

View all Army of Darkness videos

Lexi
5 votes
''Ok you Primitive Screwheads, listen up! You see this? This... is my boomstick! The 12-gauge double-barreled Remington. S-Mart's top of the line. You can find this in the sporting goods department. That's right, this sweet baby was made in Grand Rapids, Michigan. Retails for about $109.95. It's got a walnut stock, cobalt blue steel, and a hair trigger. That's right. Shop smart. Shop S-Mart. You g... read more

PvtCaboose91
2 votes
"My name is Ash and I am a slave. As far as I can figure, the year is thirteen hundred A.D and I'm being dragged to my death."

Sam Raimi's The Evil Dead trilogy at long last concluded with Army of Darkness. When it came to sequels to his cult favourite low-budget horror/comedy hybrid, Raimi never imbued them with any solid chronological obligations. In fact, the second Evil Dead fil... read more

Trapped in Time, Sourounded by Evil. Low on Gas.

pamela voorhees
1 vote
Much less of an movie, and more of an adventure! Taken back through the Neckronomicon to the middle ages along with your favorite one-armed bad ass is the third installment in the Evil Dead series. A completley different tale than that of the first two, almost stands by itself as oppose to a chapter in a series. Of course there are scares and an army of the undead, but as far as the overall creepi... read more
View all Army of Darkness reviews

Agent Kermit D. Fonz added this to a list 4 days, 14 hours ago

" While the first two, are pucktaclar masterpieces, Army of Darkness, is more quirkier comedic, and a violent The Three Stooges yuck fest. Ash is now in the Medieval Ages, trapped with no gas, and surrounded by evil. The special effects, have more of a budget which adds to it a different element, than the other films. Critics thought it was decent, and neat but it wasn’t as great as the other two. The film while not a financial success, it became a cult classic. This could be Bruce Campbell"

l8t3r added this to a list 1 month, 1 week ago
Movies Watched on Netflix (435 movies items)

“Ash Williams (Bruce Campbell) used to be an S-Mart employee with girlfriend Linda. They go to a cabin in the woods and Ash is pulled into a vortex and lands in the middle ages. He is taken prisoner along with Henry the Red by Arthur's men. He is thrown into the pit with the evil dead. Wiseman sends down his chainsaw and he uses it to defeat them. He becomes a feared hero and sets Henry and his men free. Sheila (Embeth Davidtz) hopes that he would battle the evil but Ash only wants to go home. He needs to quest for the book Necronomicon to return home.

This is a fun romp of a medieval horror misadventure. Sam Raimi is having fun and Bruce Campbell is the guy to deliver it. The over-confident irreverent Ash is hilarious. It's both a great comedy and a fun action adventure.” read more

Juldeenious added this to a list 4 months, 4 weeks ago

moviebuff added this to a list 11 months, 3 weeks ago
101 Satire Movies You Should See Before You Die (101 movies items)

diabolical dr voodoo added this to a list 12 months ago

Hootsaidtheowl added this to a list 1 year, 1 month ago
Watched In October 2021 (32 movies items)

Max the Movie Guy added this to a list 1 year, 4 months ago

"FORMAT: 35mm PRINT QUALITY: ★★★½ NOTES: Noticeably brown-tinted towards the beginning - which opens on the BBFC card, the Guild logo and a near-silent Universal logo - and some faint vertical lines cover the first reel, but also a crisp and often clear print. The scene that suffers the worst comes towards the end of the second reel, when one of the mini-Ashes jumps into Ash’s mouth and starts to become the Evil Ash, which from the moment Bruce’s eyes are in close-up is practically ja"

Max the Movie Guy added this to a list 1 year, 4 months ago

The Mighty Celestial added this to a list 1 year, 4 months ago

"In this final installment of of the Evil Dead series, it's time to go back in time and kick some Ash. The genre shambles it's way from horror into fantasy adventure as the story shifts from the modern day setting of the isolated woods to the backdrop of the Arthurian landscape of the Middle Ages. And when you take a chainsaw back to medieval times, it's just as effective as a sword when it comes to slicing and dicing through the decaying flesh and skeletal limbs of a multitude of minions of mo"

marenarobros added this to a list 1 year, 5 months ago
Gli amici del fantacinema - Best movies of the 90s (105 movies items)

Agent Kermit D. Fonz added this to a list 1 year, 5 months ago

Joreth added this to a list 1 year, 9 months ago
Halloween Marathon (109 movies items)

Exclusive posted a image 2 years ago