Following the deadly town meeting, Rick and Morgan discover a large group of walkers in a nearby quarry. Rick pushes forward a plan to lure the walkers away from the community before they become a greater threat. Rick's brutal domination of the Alexandrians leads one to contemplate killing him while Morgan provokes him to question his conscience. Ultimately, the plan falls apart when a horn blares near Alexandria, attracting many walkers from the orderly "parade." 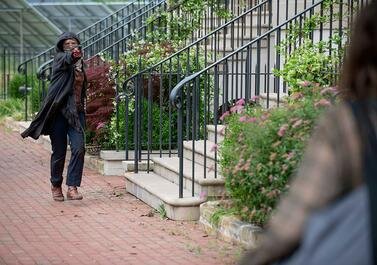 Alexandria is invaded by the Wolves, who brutally slaughter people in the streets. Spencer opens fire on a truck approaching the wall, killing the driver and inadvertently activating the truck's horn. Morgan saves people while Carol fights her way to the armoury and distributes guns to survivors. Carl tries to shelter Ron and Enid, but Ron refuses his protection and Enid flees Alexandria. As the Alexandrians begin fighting back, Morgan is attacked by a member of the Wolves he had previously met on the road and convinces him and his pack to retreat. 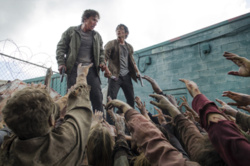 Glenn and Michonne race to lead a group ahead of a herd which has changed course for Alexandria. The herd catches up to them, and only Michonne, Heath and Scott make it back to the community. Failing to distract the herd, Glenn and Nicholas are surrounded by walkers, leading Nicholas to panic and kill himself. Rick circles around for an RV hoping to draw the herd back on the planned route, but he is attacked by the Wolves that Morgan dismissed from Alexandria. Rick kills them, but the shot-up RV won't start as the walker herd begins surrounding it. 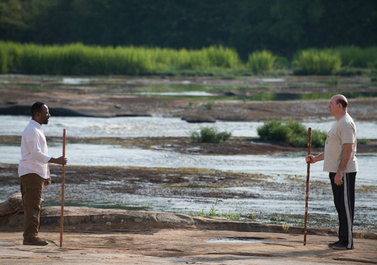 In flashbacks, Morgan is living in the woods after burning down his apartment in a fit of insanity. He stumbles upon a secluded cabin and shoots at its sole inhabitant, psychiatrist Eastman, who knocks Morgan out and locks him in a cell. The two gradually bond as Eastman teaches Morgan aikido and a philosophy that all life is precious. After Eastman is killed by a walker, Morgan leaves and discovers a sign that leads to Terminus. In the present, Morgan tells his story to a Wolf he had secretly taken prisoner, in hopes of inspiring him to change his ways. 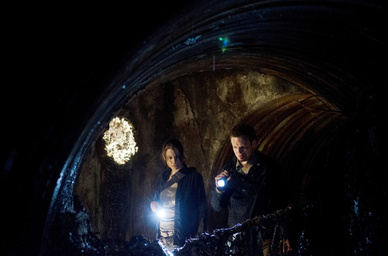 Rick returns to Alexandria barely ahead of the walker herd. With walkers now surrounding the community and the town ravaged by the Wolves' attack, morale among the Alexandrians begins to drop. While searching for Glenn, Maggie tells Aaron that she is pregnant. Denise is quickly losing her confidence in her abilities as a doctor, but Tara encourages her to continue trying. After Rick saves Deanna from a walker, she suggests he is more fit to lead Alexandria. 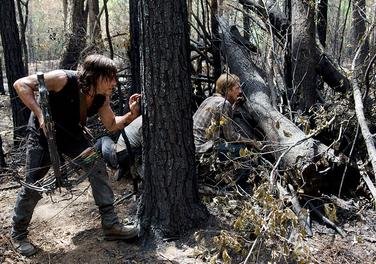 While helping lead the walker herd away from Alexandria, Daryl is separated from Sasha and Abraham when they're ambushed by a group of strangers. Daryl is captured by a trio of survivors, who suspect he is one of the assailants. Daryl tries to recruit his captors, but they steal his crossbow and motorcycle before fleeing. Abraham and Sasha reunite with Daryl; they begin to head back to Alexandria in a fuel truck. 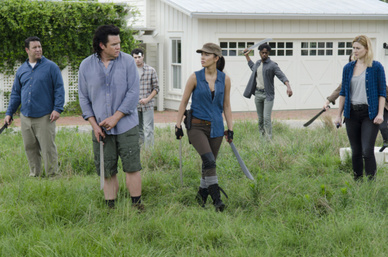 After hiding from the walker herd, Glenn encounters Enid and convinces her to accompany him back to Alexandria. Ron sneaks into the armoury and steals ammunition. Carol confronts Morgan, suspecting that he is holding a prisoner. Glenn and Enid release several balloons, leading Maggie to realize Glenn is alive. However, at that moment, the damaged clock tower collapses, opening a breach in Alexandria's wall. 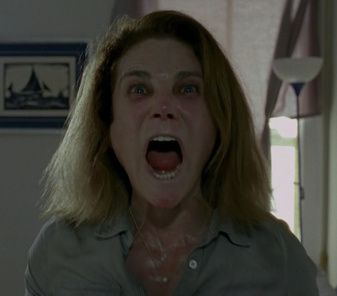 With the wall breached, walkers invade Alexandria. Rick, Michonne, Carl, Gabriel, and Deanna take refuge in Jessie's house; they discover Deanna has been bitten. Carol takes shelter in Morgan's house and discovers Denise treating the captured Wolf. Carol attempts to kill the Wolf, but Morgan stops her, only to be immediately knocked out by the Wolf, who takes Denise hostage and escapes. Succumbing to infection, Deanna stages a last stand as Rick's group disguises themselves as walkers and maneuvers through the walker horde. In a post-credits scene, Daryl, Abraham and Sasha are confronted by the Saviors, who tell them that all of their possessions now belong to Negan.

0
Lennie James
No Way Out 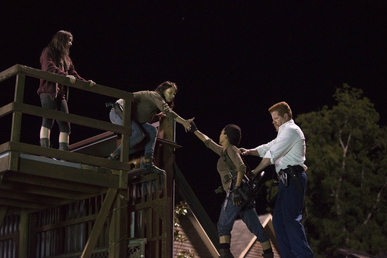 After eliminating the Saviors patrol, Abraham, Sasha, and Daryl continue toward Alexandria. While saving Denise from walkers, the Wolf is shot by Carol and killed by walkers. Sam and Jessie are killed by walkers while moving through the herd. In response, Ron tries to shoot Rick, but is killed by Michonne; Carl is shot in the eye as the handgun discharges. Rick inspires others to make a desperate stand against the herd; they are about to be overwhelmed when the walkers are diverted by burning fuel brought by Daryl, Sasha and Abraham.

0
Sonequa Martin-Green
The Next World 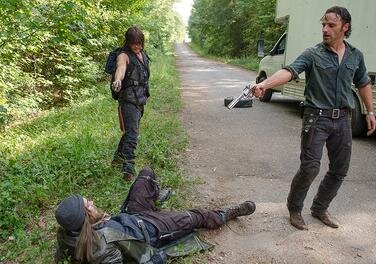 Some two months after battling the walkers in Alexandria, Rick and Daryl head out for a supply run and encounter a smooth-talking man known as Jesus, who steals their truck; they bring him back to Alexandria after a tussle. Meanwhile, Michonne follows Spencer into the woods and aids him in dispatching and burying the walker that once was his mother, Deanna. 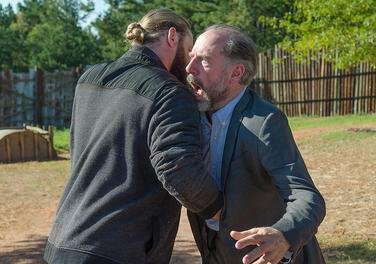 Rick's group travels to The Hilltop with Jesus to trade and alleviate Alexandria's food shortage. Talks are interrupted when a Hilltop resident attempts to assassinate Hilltop's leader, Gregory, on Negan's orders. Jesus explains that Negan's people have been extorting food, medicine and supplies from the Hilltop under the threat of an attack. Maggie makes a deal with Gregory to kill Negan, take out the Saviors, and return a Hilltop hostage in exchange for half of their supplies.

0
Christian Serratos
Not Tomorrow Yet 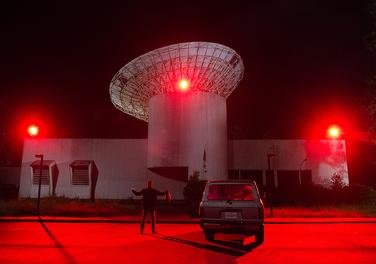 Rick campaigns for a pre-emptive attack to kill the Saviors, leaving Carol haunted by the lives she has taken. Using a ruse to kill the guards at the compound, they secure the Hilltop hostage, Craig, and proceed to methodically murder several Saviors before an alarm is triggered. Jesus and Tara send Andy back to the Hilltop with Craig to honour their deal, while Carol prevents Maggie from joining the fight. The next morning, Tara and Heath depart on a supply run. A lone surviving Savior named Primo tries to escape; while Daryl beats him, a woman's voice comes over a walkie-talkie, claiming that they have Maggie and Carol. 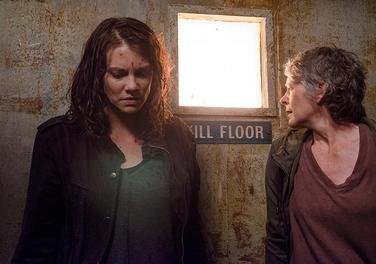 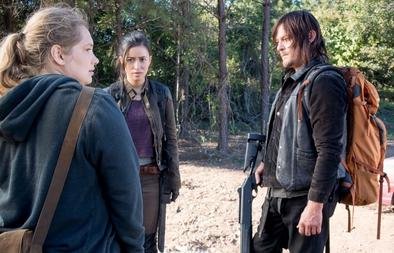 Abraham and Eugene go on a patrol and find a facility where Eugene can craft ammunition; Abraham leaves after Eugene claims he no longer requires Abraham's protection. Daryl, Rosita, and Denise travel to an apothecary to scavenge medicines. Denise is killed by Dwight and the Saviors, who ambush Daryl and Rosita while holding Eugene hostage. A gun battle ensues, and Eugene is injured before Dwight retreats with the surviving members of his group. Carol sneaks out of Alexandria, leaving a note for Tobin expressing her wishes not to be pursued. 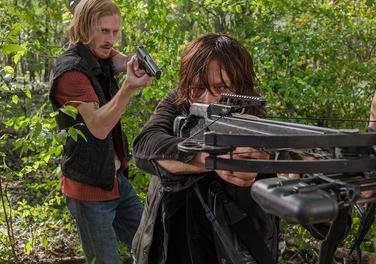 While Alexandria is locked-down against the Savior threat, Carol is caught by a group of Saviors who want to use her to get into the community. She kills most of them, but one, Roman, survives and pursues her on foot. Rick and Morgan follow a blood trail they believe is Carol's until Morgan sends Rick back due to his murderous reaction toward a non-hostile survivor. Aided by Glenn, Michonne and Rosita, Daryl hunts Dwight to avenge Denise, but the four of them are captured in the woods by Dwight and the Saviors. 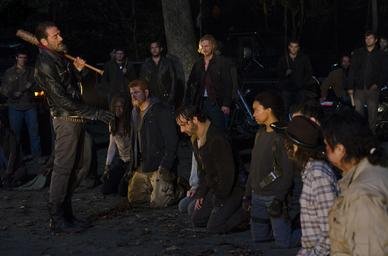 Roman finds Carol and shoots her twice, but is killed by Morgan before he can finish her off; two strangers find Carol and Morgan and offer to take them to their community for refuge. Rick's group try to get Maggie to Hilltop for medical attention, but find all of the routes blocked by the Saviors. Although Eugene volunteers to distract the Saviors while the rest of the group gets Maggie to Hilltop on foot, everyone is captured. Negan, who was not Primo, arrives and coerces the group's loyalty. As punishment for their actions, he bludgeons an unseen member of Rick's group to death with his barbed-wire laced baseball bat "Lucille".

Watched in April 2018 by Hootsaidtheowl