Growing up, it always frustrated me whenever the majority of big budget action flicks or martial arts movies of the time often seemed to sacrifice on story to make room for the expansive bangs and the expensive effects. It was generally said, that in these types of movies, you couldn't really have both, particularly, at a consistent high level. And I was one those kids who always asked "Why not?"
And then came the House Of Flying Daggers. And with it's beautiful story of love and intrigue, combined with lavish costumes, solid performances and unique individually themed action sequences, this film of the burgeoning genre known as wuxia, seemed to asked that very same question.

7.8
Crouching Tiger, Hidden Dragon (2000)
The movie that practically introduced the West to the trend of wuxia-style film-making.

A martial arts film that decides that it's not going to be one.
Many forms of physical combat like to brag of itself as being a form of violent ballet, but Crouching Tiger Hidden dragon is one that just wants to portray it martial arts as an art tool that blends into the majesty of the story's theme of honor, love and wisdom, that this film ends up laying claim to that dance-metaphor that the other fighting films wish they could be truly worthy of.
No character in this film, no matter how small, is colored in the simple black and white colors of good & evil, and all are duty bound by a personal sense of honor. And both men and women are equally capable in either masterfully full contact engagement or scaling the walls & even the very air in gravity defying leaps that serve more to enhance the fable-like atmosphere of the story.
Intelligent, straightforward and "martially artistic", Crouching Tiger Hidden Dragon is a pure fun action flick merged into a story whose simplicity is hidden behind the human depth of a group of characters who believe their respective situations to be truly epic.

7.6
Enter the Dragon
Man,
forget all those stupid Chuck Norris internet memes that you see running ridiculously rampant all over the world wide web. He's nuthin' but a milquetoast martial arts mockery whose so-called brass balls could never hope to stand up against Bruce Lee's raging fists of fury.
You really want to see what badd-ass 100% kickassery looks like in it's purest form?
Exit the Texas Ranger.
Enter The Dragon.

7.9
Hero
A martial arts movie with beautifully colored fighting themes, an actual purpose in it's plot-line and more arrows than some metaphor that would contain a point about many more arrows that any situation would ever deem necessary.
An epic kung-fu flick that is way more poetic than this or any other description of Hero could ever hope to be.

7.6
The Legend of Drunken Master (1994)
Back during my college days, the whole time that I was enrolled, I probably consumed enough beer so as to qualify me as some sort of a drunken master.
But through my lack of training and discipline, I was never enough of a master to be able to fight in any kind of a kung fu battle whilst in this alleviated state of inebriation. Particularly in any manner that allowed me to use every piece of furniture, silverware &/or knick-knacks that was in my immediate disposal in a cool offensive style like Jackie Chan does in this movie.
But, I was always drunk enough to at least think I could.

Even though Enter The Dragon and Fist Of Fury often interchange with this movie as far as my being my favorite Bruce Lee film, Game Of Death is the one that I find myself watching the most.
Maybe it's because, with since it actually remains unfinished (in my eyes, the post-Lee parts don't count... ) it leaves plenty of room for interpretation on what could have been.
After Lee's death, martial arts genre took a real nose dive as far as the kind of quality and especially the kind of integrity that Bruce seemed to be striving for.
And while lately, the genre has taken many strides forward as far as being taken more seriously as a cinematic art-form, watching the ideas that Bruce set upon this early "kung fu flick" always make me wonder about the potential that the original Dragon must have dreamed about & hoped for.

Now while I agree with most people that (Legend Of The) Drunken Master II was technically a better and more masterful movie, this film is the beginning, and my favorite one featuring Jackie Chan's comedic style of "combat". There are still times when I watch the action scenes of DM and they still seem as energetic, cool and creatively crazy today as back when this first came out.
And to this day, there are many times when those alcoholic induced martial arts moves inspire me to think "I bet I could fight like that too."
If I was drunk.
Really drunk.

I had heard of Zatoichi, but never bothered looking up anything about this long-lasting character of the East. I stumbled on this DVD, and found myself enjoying it so much, that the end result was multiple viewings with no diminishment in enjoyment. The movie, just like the series of an earlier time, follows the latest adventure of a mystery traveler commonly referred to as the "blind masseuse", who in actuality is a gentle samurai warrior who's lone wolf journeys could've well been the inspiration of the Italian counter-part, "Man With No Name" of spaghetti western fame. Silent, noble and despite his blindness, the ability to see with more clarity, not just the world around him, but also the will and intentions contained within the hearts of all he encounters.
A great classic character of the Japanese tradition.

At first glance, this looked like a B-style action-flick that was just too goofy for me. But as I watched it, it became more like a movie that seem to sufficiently balance between the lines of well-crafted high-fantasy credibility and a comic-book-like story-line. And also at the same time, between epic wuxia style battle moves and cheesy yet energetically fun kung-fu camp.
And at the center, tying all these almost conflicting themes together are three high-flying colorful female warriors whose chemistry made it impossible for me not to fall in love with each one of them. This trio of hot Asian super-heroines who fight crime with such cool moves and kick-ass sultry outfits are so sexy, that it makes my pimp-ass want to do sumthin villainous just for the spanking.
Plus, I defy any one not to "loose their head" over the villainous Kau and his throwing "skull-cage" on a chain.
While I realize that this isn't really considered a maverick of this field,for me, the charisma between these well-rounded & distinct characters was enuff to hook me into this non-guilty guilty pleasure.

Oh wait....
I think I might be getting this mixed up with another movie from a completely different genre......

7.2
The Matrix Reloaded (2003)
After this movie came out, could you feel it?
Could you feel the idea and use of special effects in the entire sci-fi genre take a major step forward?
I know I did.

For me, this is kind of like a "The Matrix Unloaded".
A very stunningly stylish movie that features action sequences that any martial arts or straight-up action flick would be proud to call it's own. And even tho the story, like The Matrix, seems like it can lose it's audience every couple of turns and again, it does have a more solid and linear structure, making it is possible for the viewer to get back onto understanding it's premise.
And I liked that since Equilibrium did not have the big budget that it's computer themed bigger succeeding cousin had, that it came up with a concept called "Gun Kata", to allow for the insane bullet hails that make these types of gun-toting movies the kind that could cause even the hardiest NRA member to bust his own cap.

7.2
The Karate Kid (1984)
Despite it's name, this is obviously a movie isn't exactly the type that is usually categorized in the genre of "martial arts films".
The fight sequences of this film are much more down to earth & not of the gravity-defying level of the comicbook-like uber-moves that we are used to an actual chop suey kung fu flick (I know, I know....karate & kung fu are two separate things....but you know what I'm saying...). But I include here on this list of personal fu favorites just b'cuz it does a great job of showcasing the initial steps of learning this style of fighting. And not just on a physical level, but also (& probabably, more importantly), on a psychological level as well.
"Banzaiiiii!!!!"

7.7
Lady Snowblood (1973)
Before there was Beatrice Kiddo, the Bride, waking up after her supposed death and staining the snow with blood in Kill Bill vol. 1*,
there was Yuki Kashima, aka Lady Snowblood, doing the exact same thing. But unlike the Bride, who did it as a homage to the Pinky Violence genre, Lady S did it as the originator of these kinds of story themes and was an early entry into the field of female film bad-assery. 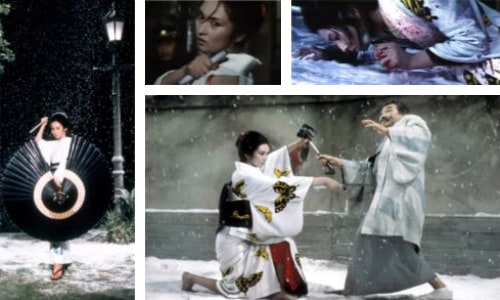 *(For any fans of the Kill Bill films, the battle scene where Kiddo goes Hanzo sword to Hanzo sword with O-Ren Isgii was inspired by this movie.)

6.9
The Last Dragon (1985)
Prince's ex-nasty girl, Vanity teams up with a dragon that can catch bullets with his teeth.
Sho-Nuff.

Only two words can be used to describe this movie: Bad @ss.
Not only is this Quentin's homage to martial arts flix, but it also includes homage's to anime & those funky, grainy 70's Bruce Lee's wannabe's that made us laugh with their unsynchronized voice-overs, jagged camera movements & b-level musical sound effects. And yet, he was able to combine all this in a manner that was just plain...
well....
... bad-@ss.
Oh, & by the way,
out of sheer curiosity, I just performed the Five Point Palm Exploding Heart technique on myself, just to see if it works. Now, as I post this, I have just completed taking the 5 steps forward, & am now waiting to see if anything will actually happ


The title of this thread says it all.

Runners Up:
Brotherhood Of The Wolf.


Other lists by The Mighty Celestial:

10 Movies That Feature A Dancin' Travolta In 'Em www.listal.com/list/my-list-9158

Can't We Be Dysfunctional Like A Normal Family? www.listal.com/list/dysfunctional-family-movies


My Favorite Movies By Genre:

Foreign:
- From Around The World www.listal.com/list/my-top-10-favorite-foriegn

Ay To Zee: My Favorite Films By The Alphabet
26 item list by The Mighty Celestial
7 votes

From Best To Worst: James Bond by Exclusive

Films set in Michigan by CelShader

Don't You Forget About Me - Amnesia in Films by Alabama1971

Animate This! My Favorite Stop-Motion Films by The Mighty Celestial

Animate This! My Top 15 Favorite Anime Movies by The Mighty Celestial