7.5
Batman (1989)
You'll have to excuse my indulgence with this entry, because, as a comicbook nerd, I just had to find a spot on this list for this movie.
Okay, so maybe, the latest incarnations of the Dark Knight have sort of watered down the impact of the Caped Crusader's modern film debut.
And maybe, Jack, for the role of the Joker was a little too old, not to mention, not in the kind of shape that one would expect for a Clown-Prince of Crime.
For me, personally, this isn't so much about the acting (which I admit, despite the fun he has with it, Jack does tend to opt for an over-the-top performance, even for the Joker....) but more for the weight that his presence brings to the flick. In the same manner of Marlon Brando's participation in Superman's 1st big budget blockbuster, Nicholson also brings a certain class & credibility to a movie based off of a what the "cool kids" of the general public tend to look at as "just a silly comicbook".
This initial version bought to you by Tim Burton, Nicholson & a capable Michael Keaton, still was the first effort to finally introduce the dark grit element that revealed the constant Batman /Joker struggle as the real bad @ss dynamic that we who read the comics always knew that it really was.

7.1
About Schmidt (2002)
Jack decides it's time to step away from the more spotlight movies and start flexing some acting muscles to remind everyone that he's not just the joltin' Jackster that Hollywood has decided to iconicly cement him into.
Jack plays a role of which we're not accustomed to seeing him in. A man who after a lifetime made up of a reliable yet indifferent job, a dutiful wife who makes him sandwiches for lunch and a family that has just simply moved on, now finds himself alone and purposeless.
And thus begins a journey for identity and meaning in which, hopefully, the end result will be some tidbits of inner-discovery that will help to ease the last-leg phase of a meandering life that is, basically, about Schmidt.

7.3
Easy Rider (1969)
What is one to do when the sixties are coming to an end, & so is the decade of free love & drugging out for the respectful purpose of reaching a higher state of being?
Get on your Capt. America bike & make an intercontinental trip drug deal big enough to hopefully end up retired in Florida.

And long the way, maybe pick up a football helmet wearing Jack Nick, to keep you company as you make a stop or two off the side of the road to take one last piss onto the vast barren lands of the establishment.

Okay, I know he got razzed alot for this performance, but I liked it alot. When I look at footage of Jimmy Hoffa, Jack looks & sounds in this film alot like the infamously corrupted union leader.
But since I'm not only in the minority with this opinion, I'll just end my thoughts on this now so that the attention of anyone who reads this will disappear as as silently & quickly as Hoffa's body.

8.2
Chinatown (1974)
Jack Nicholson's only role as a detective in a "modern" noir film that doesn't try to be anything else other than a modern take of a noir film. It is because of this, that the 1970's sensibilities that are just a natural result of being a film of this era, along with it's "twisted" twist ending, that Chinatown comes off as being a work more layered & "edgy" than a standard mystery film. Which ends up giving this movie a much more distinctual feel that surpasses the genre in which it respectfully tries to remain faithful to.
And when you think about it, aren't those the type of qualities that usually make a classic film a classic?

7.5
Five Easy Pieces (1970)
Five Easy Pieces marked the beginning of a type of movie that was to spring forth more readily from the decade of that was the 70's. A movie that was difficult to explain & driven more by the behaviors reactions of the character, trapped in a life situation so personal, that it's not the usual standard plotline that we see usually churned out by the Hollywood machine.
This is a work that recognizes that modern human beings, particularly in this society, each lead a life who's story meanders thru a string of events that isn't easy to categorize into some kind of linear plot.
And just like the lead character in this film, it can lead to an existance without structure or direction. Jack Nicholson, already a name in cinema by this point, but not so big that he was "Jack" yet, portrays Bobby Dupea, a man so lost with a lack of ambition & emotonal awareness,
yet silently clasping for some way to have 'em. His reactions dilegently somber, peppered with outbursts of exasperated frustration. His inability to understand coupled with his abilty to actually know better, trudges him thru an experience that offers no clues to any answer, that for him, that in the end, sometimes the easiest thing to do just seems to just run away & start over.
A film that is much more distinctive that it may first appear to be.

7.7
As Good as It Gets
I've never really been into romance flicks all that much. The few that I do enjoy usually tend to have a sort of a sharp or jagged edge to 'em. And this one definitely does thru Jack's portrayal of a writer with "redrum" on his mind. At least, he does with the little dog during the opening sequence.
Nicholson eases thru the role of a crusty curmudgeon with psychologically-based anti-social issues (Is it just me or does it seem that the majority of Jack's most memorable roles always have something seriously askew upstairs? Or am I just being crazy?), & he does so with the insane-like smoothness of an actor who can do this stuff blindfolded.
Add the fact that, at the same time, he still manages to allow himself to genuinely deliver the kind of lines that make the ladies go "awwww...", therefore substantially increasing the chances of me "gettin' some" with my date on the night I saw this film, & it becomes easy to see why this is a romantic comedy that provides an end-result that can be pleasing to both males & females alike.

7.7
A Few Good Men (1992)
I tell ya....
friggin Jack Nicholson,
in yet another role that plays perfectly to his strengths. A mean ol' sunuvabitch with a focused confidence, a black heart & a wry look that you know he wears wether he's describing a blowj#b from a female officer or warding off bullets from Cuban snipers in defense of this great country and, more importantly, of his military career. Nicholson does this to such a successful degree, that even though he doesn't really have all that much screentime in this film, the face of Col. Jessup in the witness chair is usually the 1st. image that comes up when this movie is mentioned. And as always, the mark of a great performance is to be able to deliver a line that ends up becoming a part of the culture's lexicon.
And if any of you reading this don't agree with that, then there can only be one reason why:
"YOU CAN'T HANDLE THE TRUTH!!"

First of all, I'm always partial to Stanley Kubrick. IMO, he tends to make movies that are an inch away from being abstract beyond understanding, but keeps the flow of the film reeled in just enough to make seem like it makes sense on some kind of creative level. Add in the grounding of a Stephen King story & a role taylor made for Jack Nicholson, & what you have is one of my top favorite horror movies of all time. And with very little slashing, gore, or shock that most films of this genre (especially today) tend to rely on in order to frighten their audiences. The horror stems more from Jack's delivery & facial expressions as his character, writer Jack Torrance, gradually slips into the madness of a haunted hotel's dark intentions.
The phrase "Here's Johnny!" wouldn't be a very scary line at all if it weren't for Jack's maniacal mug peering thru the door's craggled "peephole", freshly smashed thru by the axe-wielding author who suffers from writer's block & a possesed spirit, not to mention from a severe case of "redrum" on his mind.

Whenever I watch this movie, I'm always reminded that, for me, this is about as good as it gets (...sorry). Randall McMurphy is a mischievious criminal who first ends up becoming a leader of squirrelly rebellion & then, eventually, a friend to Billy & the rest the cracked eggs residing in the Cuckoo's Nest.
Jack's performance in this movie is not of a self-centered man of a salty background who becomes overly or angelically transformed, but as someone steeped in his own irresponsibility, with a hard to reach ability to care that is gradually bought up to the surface by the only type of people who could cause such a subtle & internal catalyst: a group of guys who are crazier than he is.

My Top Ten Favorite Jack Nicholson Movies
.... of all time! 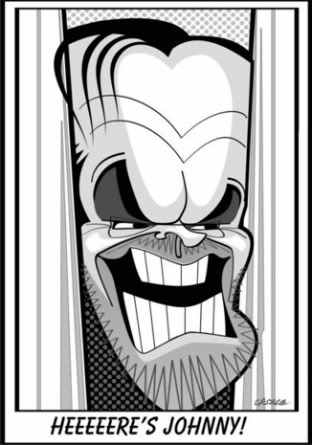 
Other lists by The Mighty Celestial:

10 Movies That Feature A Dancin' Travolta In 'Em www.listal.com/list/my-list-9158

Can't We Be Dysfunctional Like A Normal Family? www.listal.com/list/dysfunctional-family-movies

My Favorite Movies By Genre:

Foreign:
- From Around The World www.listal.com/list/my-top-10-favorite-foriegn

Best directors ever by Iano

Most Successful Movies of... Robert De Niro by SchwarzerAbt

Paul Newman is the Man by Chazz Reinhold

Most Successful Movies of... Willem Dafoe by SchwarzerAbt

Most Successful Movies of... Kevin Costner by SchwarzerAbt

Most Successful Movies of... Samuel L. Jackson by SchwarzerAbt

My Favourite Directors by Nug

Most Successful Movies of... Michael Douglas by SchwarzerAbt