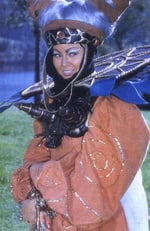 Recognizable by her cone bra and wacky hair, Rita Repulsa is a force to be reckoned with. While she may have gone by several faces, Barbara Goodson made Rita into what she is today with that legendary voice. After putting Lord Zedd under a love spell, she possibly became even more evil, proving she was willing to do whatever it took to get what she wanted.

Powers: Magic Wand, Spells
Scheme: To destroy Zordon for trapping her in a space dumpster and take over the world.
Victories: Sealing Zordon in a time warp, destroying the Thunder Zords, destroying the power coins, blowing up the Rangers' base.
Fate: Purified after Zordon's energy tube was shattered and is now the source of the Mystic Rangers' powers. 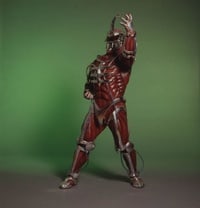 Lord Zedd may not have had any skin, but that didn't mean he was any less evil. With his snake-turned-staff (or staff-turned-snake), Zedd pulled no punches.

Powers: Telescopic vision, Magic Staff
Scheme: To do what Rita could not -- destroy the Power Rangers.
Victories: Destroying the Green Ranger powers, destroying the Thunder Zords, destroying the power coins, blowing up the Rangers' base.
Fate: Purified after Zordon's energy tube was shattered. 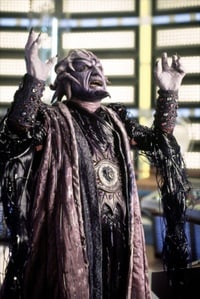 Powers: Shapeshifting, Electric shock
Scheme: Get revenge on Zordon for trapping him a hyperlock chamber.
Victories: Wrecking the command center, which slowly killed Zordon.
Fate: After joining with Hornitor, the Rangers sent him right into a passing comet. 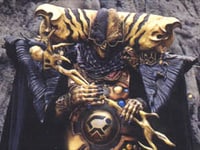 Powers:
Scheme: To do what Rita and Zedd could not -- destroy the Power Rangers.
Victories: Turning the Rangers into mere children.
Fate: Unknown 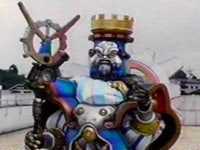 Powers:
Scheme: To do what Rita and Zedd continually failed to do -- destroy the Power Rangers.
Victories: None.
Fate: Destroyed once when he found the Damocles sword. Destroyed again by Rita and Zedd after giving his son Sprocket a gift wrapped explosive. Destroyed for the final time when Zordon's energy tube was shattered. 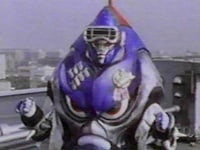 Powers:
Scheme: Originally built by Rita and Zedd to overthrow the Machine Empire. However, after the remote is lost, he joins with them instead.
Victories: None.
Fate: Destroyed by the Zeo Rangers. 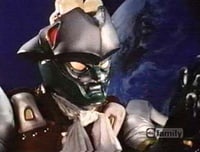 Powers:
Scheme: To take his rightful place on the family throne after his father is, temporarily, incapacitated.
Victories: None. However, it should be noted that he and his wife were untouchable in battle for the most part.
Fate: Unknown. 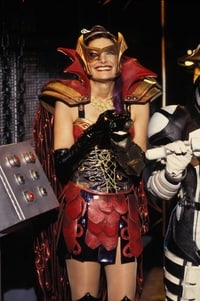 Powers: Spitting fireballs
Scheme: To capture Zordon and drain him of his powers.
Victories: Capturing Zordon.
Fate: Destroyed when he and Darkonda collided. 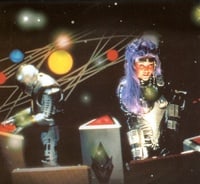 Powers: Shooting lighting bolts, Wrath Staff, boomerang
Scheme: To take out the Power Rangers before they rescue Zordon.
Victories: Sending the Rangers into hiding and causing chaos throughout the galaxy.
Fate: Denounces her evil ways, but is reprogrammed back into the evil Astronema. After being killed in battle, her brother's tears bring her back to life and she goes on to become the Pink Galaxy Ranger. 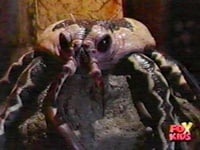 Powers:
Scheme:
Victories:
Fate: Destroyed by the Rangers after Deviot tricked him. 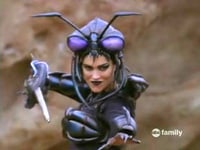 Powers:
Scheme: To destroy the Red Ranger after he destroyed her father.
Victories:
Fate: After merging with Deviot, she launches an all out attack on the space colony. It is then the Rangers presumably destroy her, only for Trakeena to flee to Earth and try to return to human form. It is then the Lightspeed and Galaxy Rangers team up to destroy her once and for all. 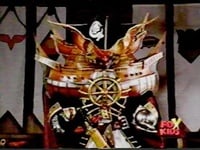 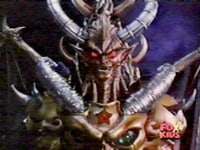 Powers:
Scheme: To take back Mariner Bay, which was built on top of the Queen's former palace.
Victories:
Fate: Destroyed by the Rangers, but resurrected by Vypra and Loki. Destroyed again by Olympius after Queen Bansheera forced him to destroy Loki. 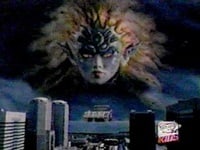 Powers:
Scheme: To take back Mariner Bay, which was built on top of her former palace.
Victories:
Fate: She was thrown into the tomb of fallen monsters, grabbing the Red Ranger in the process. Diabolico's spirit then cut her lose from the Red Ranger and the other demons attacked her.

Powers: Teleportation, bone swords
Scheme: To take revenge on humans -- those who cast him aside.
Victories: Destroying the Red Ranger.
Fate: Ransik realized the error of his ways and turned himself in. After helping the Rangers and sacrificing himself against a group of Orgs, he was then rid of his mutant disfigurement. 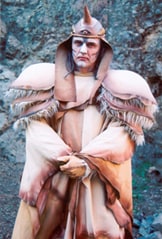 Powers:
Scheme: Out of jealously, after his friend married his crush, Dr. Viktor Adler swallowed the seed remnants of Master Org. He began to change into Master Org, killed his friends and left their son for dead.
Victories:
Fate:

Powers: Dark Ninja Powers
Scheme: To allow the Abyss of Evil to fill up with all of the fallen monsters, letting it overflow.
Victories: Killing the Thunder Rangers' adopted parents, capturing the Samurai amulet.
Fate: Sealed in the Abyss of Evil by the Wind Rangers. However, he later escaped and Mesogog trapped him in a jar. 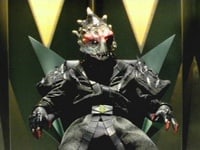 Powers:
Scheme: To revert Earth back to the age of the dinosaurs.
Victories:
Fate: After ridding himself of his human half (Anton Mercer), he evolved into Mesomonster; only to be destroyed by the Dino Rangers.

Powers:
Scheme: Get revenge on Tommy Oliver for stealing his job and the accident.
Victories:
Fate: Destroyed once, but then came back and shed himself from Mesogog, only to be defeated once more. 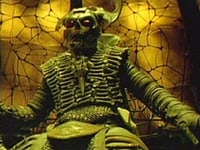 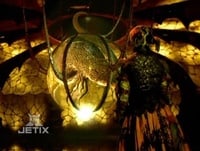 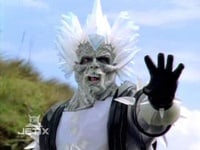 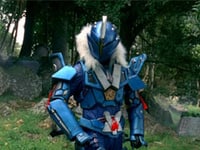 Powers: Ninja streak, and other various ninja tricks.
Scheme: To capture the Corona Aurora (and it's jewels) for himself -- giving him absolute power.
Victories: Acquiring two jewels -- only for both to be stolen from him later.
Fate: Destroyed by the Black Ranger.

Powers:
Scheme: Capturing the Corona Aurora and destroying the Mercury Ranger.
Victories: Trapping Tyzonn's former team in a cave-in and gaining several artifacts, only for them to be stolen by the Rangers.
Fate: Cheetar was destroyed while Mig released Benglo. Crazar and Mig were destroyed by Tyzonn. Benglo was destroyed by Mack. 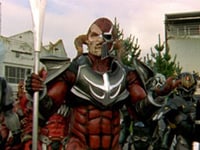 Powers: Magic Staff
Scheme: To get revenge on the Power Rangers for turning his parents good and making them "weak".
Victories: Destroying the Overdrive Rangers' link to the morphing grid.
Fate: Destroyed by the Sentinel Knight. 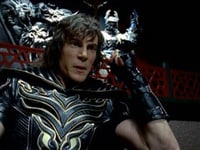 Powers:
Scheme: To get revenge on Pai Zhuq for trapping him in a box for 10,000 years.
Victories: Possessing Jarrod, injuring R.J.'s animal spirit, capturing the three Pai Zhuq masters, capturing the Red Ranger's animal spirit.
Fate: After creative differences force Dai Shi and Jarrod to split, Jarrod and Camille defect to the good side. Dai Shi transforms into his ultimate dragon form, which is weakened by Jarrod and destroyed by the core three Rangers. 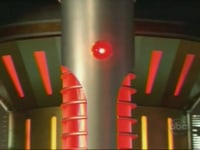 Powers: Downloading himself into any body he chooses.
Scheme:
Victories: Infecting the world's communication, power and defense systems, which forced the world to retreat to the domed city of Corinth -- the only safe place left on the planet. Also, turning most of Corinth into machine/human hybrids.
Fate: Gem & Gemma dropped a building on him.

Powers:
Scheme: To flood the Sanzu River into the human world.
Victories: Merging with Dayu, which made him partially human, and therefore unable to be sealed away.
Fate: After becoming immune to the sealing symbol, the Rangers threw everything they had at him to actually destroy him.

Powers:
Scheme:
Victories:
Fate:
Each season of this long-running show featured at least one villain to lead an army into battle with the Power Rangers. While they all usually have one common goal (to take over the world), the reason for this varies from villain to villain.

My Autograph Collection by Nonfictionguy

Most Successful Movies of... Jim Carrey by SchwarzerAbt

Star Trek: The Next Generation Cast Members by Rylvan

Most Quotable Movies by melbelleinsc

The Most Overrated/Overhyped Video Games by The Cinephile

Stuck in an elevator by tartan_skirt

The Many Faces of Power Rangers by jenndubya

Almost a Ranger by jenndubya

Rangers vs Sentai: Who Did it Better? by jenndubya

Betcha She Could Kill You With Her Brain by jenndubya