Co-developed by LEGO team Traveller's Tales along with Harmonix, LEGO Rock Band may prove to be a genius marketing trick. It will have typical Rock Band gameplay, but add in simplified modes for 'budding musicians.

0
LEGO Rock Band - Nintendo Wii
The music and sountrack will also be 'family-friendly', including songs from 'The Jackson 5', 'Good Charlotte', and the catchy 'Kung Fu Fighting'. A DS version is also planned, but may be developed by Backbone Entertainment, the team that helped Harmonix get Rock Band onto the PSP.

Harmonix's next project brings forth a special Beatles edition of Rock Band, and will contain 45 Beatles songs spanning their entire career. Future downloadable content will add even more Beatles tunes into the mix.

0
The Beatles: Rock Band - Xbox 360
The new Beatles edition of Rock Band will not be an 'expansion', and is being build from the ground up - therefore, its songs will not be cross-compatible with the official Rock Band series. It will also have a new feature not found in Rock Band - up to three vocals can be sung for certain songs. There will be special Beatles branded and style controllers, but all existing Rock Band peripherals will be compatible. There will be also a Wii edition, developed by Pi Studios.

0
Rock Band Unplugged - PlayStation Portable
Jun. 2009: Developed by Harmonix along with Backbone Entertainment, the portable edition of Rock Band for the PSP brings back nostalgic gameplay from Harmonix's 'Frequency' and 'Amplitude' titles, making the player use the consoles' own buttons to play popular hit songs, rather than virtual instruments. 41 songs are included in this title, and more are available for download thru Wi-Fi connection to the PS store.

0
Rock Band 2 - PlayStation 3
Oct. 2008: Because of a marketing agreement between Harmonix and Microsoft, the PS3 (and other platforms) were launch a month after its Xbox 360 debut. The PS2 and Wii versions were once again sub-developed by Pi Studios. The PS2 was simply a song update, but the Wii edition was a big jump over the original Wii Rock Band, finally adding downloadable songs and many missing features.

0
Rock Band 2 - Xbox 360
Sep. 2008: Launched less than a year after the original Rock Band, the sequel comes with 84 songs on the disc, improved drum and guitar controllers (yet remains backward compatible with the older controllers), a new 'Drum Trainer' mode, a 'Battle of the Bands' mode, and extra features for its online 'World Tour' mode. It sold very well, pushing, over 1.7 million copies before the end of 2008.

0
Rock Band - PlayStation 3
Nov. 2007: The PS3 version launched at the same time as the Xbox360 version. It was identical to the Xbox 360 version, except that it included a wireless guitar (X360 had a wired guitar because of Microsoft wireless licensing fees). A PS2 version followed a month later, and a Wii version in June 2008. Both of those had less features and their development was outsourced by Harmonix to Pi Studios; as such, they will not be included in this list of 'Games developed by Harmonix'.

0
Rock Band - Xbox 360
Nov. 2007: It cost over $200 million to develop, and Harmonix grew to over 130 employees, causing them to move to bigger office part way thru beta testing. Over 4 million copies sold, and thanks to sales of peripherals and over 30 million downloaded songs, Rock Band has gone on to generate over $600 million in revenue worldwide.

0
Guitar Hero Encore: Rocks The 80's - PlayStation 2
July 2007: At the end of 2006, Viacom-backed MTV Networks announced they acquired Harmonix studios from Activision for $175 million, but Harmonix had to finish up one contract left for Activision. 'Rock the 80s' is more of a stand-alone expansion for the series, rather than a true sequel. It wasn't well received, because it only included 30 songs and carried a steep $50 price tag with zero changes to gameplay.

0
Guitar Hero II - Xbox 360
Apr. 2007: When Activision bought out RedOctane, the original publishers of Guitar Hero series, they were determined to bring the franchise to all major platforms, so its no surprise they pushed out an Xbox 360 version within six months of its PS2 launch. The X360 was ideal for the Guitar Hero title, because its online marketplace and built-in hard drive enabled much better potential for buying and downloading new songs into the game. This version also included 10 extra songs not found in the PS2 version. 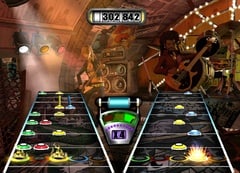 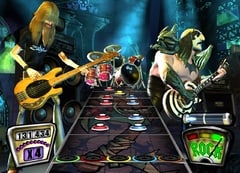 0
Guitar Hero II - PlayStation 2
Nov. 2006: After the smash hit 'Guitar Hero', Harmonix followed it up with its sequel, offering enhancements to gameplay and features such as three-button chords, and smoother support of hammer-ons and pull-offs during rhythm playing. It was an even bigger hit than the original; GH2 went on to sell 3.1 million copies in its first year. 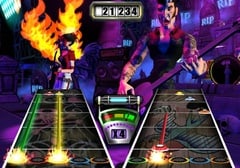 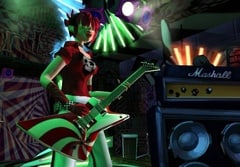 0
CMT Presents: Karaoke Revolution Country - PlayStation 2
Mar. 2006: The last Karaoke Revolution title developed by Harmonix was a CMT collaboration that brought country music into the mix. I'm just surprised that there was even a market for this game; redneck hicks that actually know how to setup a PS2 along with two peripherals. 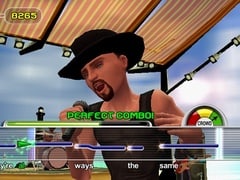 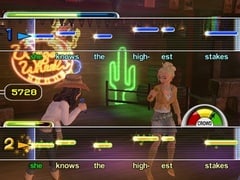 0
Guitar Hero - PlayStation 2
Nov. 2005: Because of Harmonix's great track record in rhythm-based gaming, publisher RedOctance approached them to create a game for the North American and European market that was similar to Konami's GuitarStreaks series in Japan. Featuring gameplay on a guitar-shaped controller with color-coded buttons and a strum bar, this rhythm-based rock'n'roll game was an unexpected huge success, starting up a franchise that has so far generated over one billion dollars in sales. Within two years of release, the original would sell over 1.5 million copies. 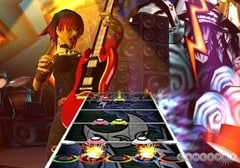 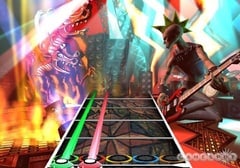 0
Karaoke Revolution Party - PlayStation 2
Nov. 2005: Harmonix threw all PS2 peripherals at this game (Microphone support, dance pad support, and even EyeToy support) to make one of the most ambitious group karaoke party games, though it was criticized for being too variant with its 50 included songs, giving lots to everyone, but people with specific music tastes were left with few choices. 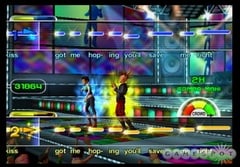 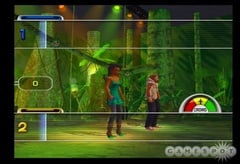 0
Karaoke Revolution Party - Xbox
Nov. 2005: Same as the PS2 edition, but minus the EyeToy support, and add in Xbox Live downloadable songs, although for a fairly steep price.

0
Karaoke Revolution Party - GameCube
Nov. 2005: The first appearance of the series on Nintendo's platform and compatibility with other GameCube microphones, such as the one bundle with Mario Party 6, made this release popular. It also support dance pads like the Xbox and PS2 versions.

0
Eye Toy: AntiGrav - PlayStation 2
Nov. 2004: In a rare departure from music-based games, Harmonix tried to make clever use of the PS2's Eye Toy. Unfortunately, by pushing the envelope on what the camera is capable of, the Eye Toy kicked back and ruined this potentially-great game by constantly losing focus of player's face and locking in on their elbows and necks instead midway thru levels. 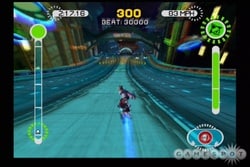 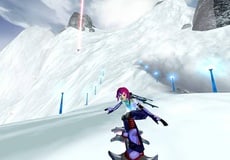 0
Karaoke Revolution - Xbox
Nov. 2004: The first Xbox version of Karaoke Revolution includes all song from its PS2 version, plus four songs take from Vol. 2, as well as 10 new 'Motown classics' not found in the PS2 volumes. And thru Xbox Live, more songs were available for download. 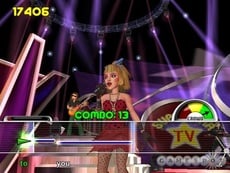 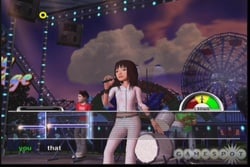 0
Karaoke Revolution Volume 3 - PlayStation 2
Nov. 2004: Released soon after Vol.2, the third in the series brought in new songs as well as a 'duet' option for two players to sing at same time. 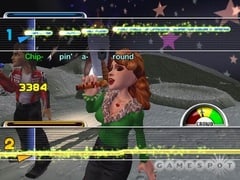 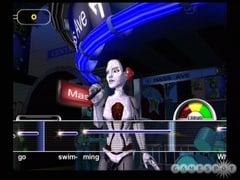 0
Karaoke Revolution Volume 2 - PlayStation 2
Jul. 2004: Brings all new songs, as well as some new modes to the series. Also, a microphone began to be included in Vol.2 bundles, as opposed to headsets that came with the first Vol. 1 releases. 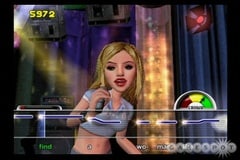 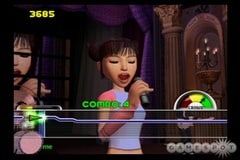 0
Karaoke Revolution - PlayStation 2
Nov. 2003: Konami, the developers of the Beatmania, Dance Dance Revolution, and GuitarFreaks series in Japan, teamed up with Harmonix to start up a new franchise focused on Karaoke-style gameplay. A PS2 headset came included in all early versions of this game. 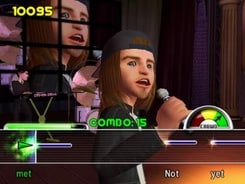 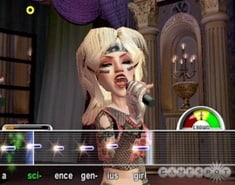 0
Amplitude - PlayStation 2
Mar. 2003: In this sequel to Frequency, Harmonix did some changes to the gameplay, making it one of the best controller-input beat games ever made, and brought in more mainstream tracks to broaden the game's appeal. Once again, they won awards, got critical praise (GameSpot gave it an 8.8 out of 10) and a cult following happened, but it did not generate sales they hoped for. 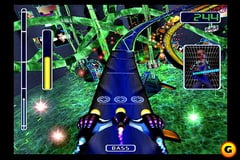 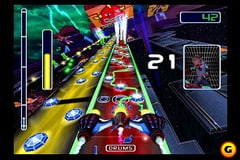 0
Frequency - PlayStation 2
Nov. 2001: Featuring tracks from a number of underground electronic artists, backed by VP of SCEA, winning numerous awards and critically praised, Frequency gave Harmonix studio the recognition, but not the sales. From a financial standpoint, Frequency was a flop. There were no peripherals; all beats where input thru the controller. 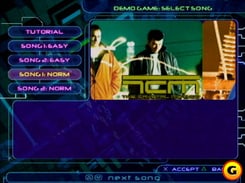 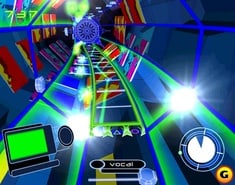 0
The Axe: Titans of Classic Rock - PC Games
1998: Harmonix's first release was for a PC game that used mouse and joystick to simulate beats from hard and classic rock tracks. It got quite a few few good reviews, but never got the exposure due to lack of a good publisher. After this, Harmonix started really following the Japanese developments in rhythm/music gaming, such as PaRappa, Dance Dance Revolution, and Beatmania, to influence them towards developing 'Frequency' for the PS2.


Harmonix was founded in 1995 by Alex Rigopulos and Eran Egozy who met while attending MIT. The company was built on the premise that the experience of performing music could become accessible to those who would otherwise have trouble learning a traditional instrument.

To develop FreQuency, its first music video game, Rigopulos and Egozy formed a larger team, finding many of their new employees to be musicians. Featuring songs by a number of underground electronica artists, FreQuency allowed players to perform and remix a variety of music. The game was backed by SCEA Vice President of Product Development, Shuhei Yoshida. Released in 2001 on the PlayStation 2, FreQuency was critically acclaimed and won numerous awards, though it failed to become a mainstream success. It wasn't until 2005 that Harmonix gained world-fame with its smash hit Guitar Hero. The rest is history...

Other 'Developer By' series on Listal:

Developed by tri-Ace by List-All