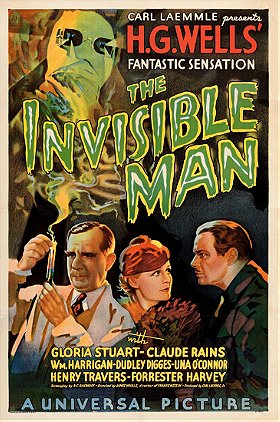 View all The Invisible Man lists

indianastar
If you watch this movie your in for a treat the Invisible Man directed by James Whale the same guy who made Frankenstein it was also based on the book by science fiction grandpa H.G. Wells Jack Griffith is a scientist who makes a serum that can turn him invisible [img id=1838622 width=500full] but can't turn back to normal for 1933 is the special effect looks great [img id=3411628 width=500full] d... read more

flyflyfly
A remarkable cinematic achievement rightfully categorised as a horror classic, albeit with a discernible, measured thread of comic verve and goofy humour. Demonstrating groundbreaking visual effects and showcasing an even stranger and amoral antagonist than Frankenstein's monster, the story addresses the folly of man in terms of harnessing intellectual dominion and notoriety through scientific ach... read more
View all The Invisible Man reviews

With THE INVISIBLE MAN (the first film in a series), James Whale (FRANKENSTEIN) provides another stylish, blackly comic entry in the popular Universal horror cycle of the 1930s. When a mysterious man, face wrapped in bandages and wearing dark goggles, arrives in a small English village one snowy night, things start to go awry. Jack Griffin (Claude Rains), a chemist who has discovered an invisibility formula, wants desperately to find the antidote, but a side effect of the drug is driving him insane. Becoming gradually more unhinged, Griffin strips off his nose, bandages, and clothes before the stunned villagers and sets about terrorizing the countryside. When he progresses from mayhem to murder, Griffin's beloved Flora (Gloria Stuart) and colleague Dr. Kemp (William Harrigan) work with police to try to capture the elusive Invisible Man. It is a race against time to stop Griffin's plans to make the world "grovel" at his feet. Watch for the stunning special effects during the snowy climax to this gripping, atmospheric horror classic.

Fabocco added this to a list 8 months, 3 weeks ago

"Dr. Jack Griffin, a British scientist who has discovered the secret of invisibility and has taken the drug responsible for the incredible feat. The drug, however, also drives the doctor mad. Griffin goes on a violent rampage, and the police struggle to hunt him down, unable to see their target, while his mentor and his former partner desperately try to devise a plan to capture him."

the giraffe added this to a list 11 months, 2 weeks ago

"Re-watch - Oct. 18th I think it's safe to say the kiddo liked this one the best out of the collection so far. She was very impressed with the effects, questioning how they could pull them off back then. I kept my mouth shut, letting her enjoy the mystery and wonder of it. "

Exclusive voted for an image 11 months, 3 weeks ago

SleepyHollowFan5 added this to a list 11 months, 3 weeks ago

indianastar added this to a list 1 year, 1 month ago
Monsters Mash 2019: The Static Age (31 movies items)

diabolical dr voodoo added this to a list 1 year, 3 months ago

Blonde added this to a list 1 year, 3 months ago

BradWesley123 added this to a list 1 year, 6 months ago

sdepy83 voted for an image 1 year, 8 months ago

kogarasumarus added this to a list 1 year, 11 months ago

rewster voted for an image 1 year, 11 months ago

crazymetalhead added this to a list 1 year, 11 months ago
Horror Movies that Influence me to direct films (119 movies items)

JxSxPx added this to a list 2 years, 1 month ago

"James Whale’s anarchically playful The Invisible Man is an outlier among Universal’s line of classic monster movies. More of an inventive mash-up of black comedy and sci-fi than true horror, the film is an incendiary piece of speculative fiction that counterbalances its cautionary-tale tropes by perpetually reveling in the chaos its megalomaniacal protagonist stirs up, even as his intensifying violent impulses shift from harmlessly prankish to straight-up lethal. This pervasive sense of mora"

Beanie added this to a list 2 years, 2 months ago

"In comparison to the other Universal horror films of it's decade, this one may be the most underrated. It only received one sequel, and even today, is not spoken of nearly as much as films like "Frankenstein" and "Dracula". Which is just a damn shame, because it's one of the best. Directed by James Whale, who also helmed the Frankenstein films, this one pushed the boundaries of horror films even further with it's special effects, which still hold up today, for the most part. Claude Rains is fant"

" With impressive special effects for its time, THE INVISIBLE MAN is an old-school horror film that is rather funny in the most macabre way. Featuring a stellar performance from Claude Rains, this film is a showcase in insanity and mayhem, as Rains is quite literally murdering nearly everyone thanks to him being invisible. It's a scary idea and the execution in THE INVISIBLE MAN, to bring that terror alive, is done to perfection. "

JxSxPx added this to a list 2 years, 7 months ago
Must See Sci-Fi: 50 Movies That Are Out of This Wo (50 movies items)

“A remarkable cinematic achievement rightfully categorised as a horror classic, albeit with a discernible, measured thread of comic verve and goofy humour. Demonstrating groundbreaking visual effects and showcasing an even stranger and amoral antagonist than Frankenstein's monster, the story addresses the folly of man in terms of harnessing intellectual dominion and notoriety through scientific achievement. A document of its time that continues to attract contemporary viewership on the basis of its suspenseful, perfectly condensed examination of a scientist driven mad in the pursuit of power and recognition for his perceived genius, so much so that he is prepared to transform himself into a monster. "The Invisible Man" is a scintillating and superlative standout in the revered canon of Univ” read more

BLivingston33 added this to a list 2 years, 8 months ago

moviebuff added this to a list 3 years, 1 month ago
101 Influential Movies You Must See Before You Die (101 movies items)