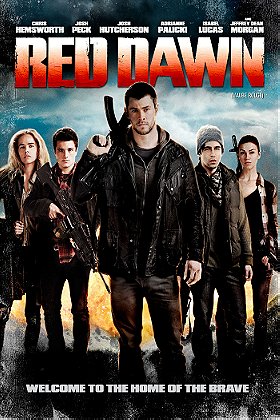 Michael S
1 vote
Unwarranted criticisms abound for this remake of the 80's cheese-fest which starred a host of up-and-coming, young B-listers such as Patrick Swayze and C. Thomas Howell. In contrast, this updated version has it's own troop of young Hollywood talent including Chris Hemsworth, Josh Peck, Adrianne Palicki and Alyssa Diaz; the aforementioned contrast being that this time the cast can actually act.

Red Dawn was filmed and completed three years ago in 2009, but its studio, MGM, went bankrupt and lacked the money to grant the picture proper distribution. The same fate was shared by Joss Whedon and Drew Goddard's The Cabin in the Woods, which was at long last released earlier in 2012. The two films share a common star in Chris Hem... read more
View all Red Dawn reviews

jordanwiles94 added this to a list 1 year, 1 month ago
Original vs. Remake Movies/TV Shows (315 movies items)

Kendraatje voted for an image 2 years, 1 month ago

ekimo72 added this to a list 2 years, 4 months ago
My Movie Collection (5158 movies items)

Nerdy Werewolf added this to a list 3 years, 2 months ago

" This was really reminiscent of 'Tomorrow, When the War Began', which I thought was a great story and truly enjoyed. Then, I was told that 'Tomorrow' is a huge ripoff of the original 'Red Dawn', which I have yet to see. I guess I just need to finally watch the original. Meh."

Tumppi added this to a list 3 years, 5 months ago

MarkusT90 added this to a list 4 years, 9 months ago

"Seen this couple of times now and still think it's one of the good remakes in a while. Of course the original is way better."

moviewatcher122 added this to a list 5 years, 3 months ago

"July 14 "How did you get shot down, Colonel?" "It was five to one. I got four." OK, I just did something a little unorthodox. I used a quote from the original Red Dawn. Actually it was the same quote I used from when I watched the original two years ago. It doesn't matter anyways since this is a godawful remake that didn't need to be made. While the cast does an OK job with the material they are given, I just hated everything else about this movie. Even though the original Red Dawn was chees"

moviewatcher122 voted for an image 5 years, 3 months ago

ChihuahuaDaddy added this to a list 5 years, 3 months ago

"While I realize that it's only fiction, the idea of the Red Dawn remake is just fucking stupid. The original Red Dawn wasn't great, but the plot was at least a little plausible. But the North Koreans invading the U.S.A.? They wouldn't make it past the Pacific coast. They would get slaughtered by MS-13 and other gangs, assuming they don't immediately defect en masse."