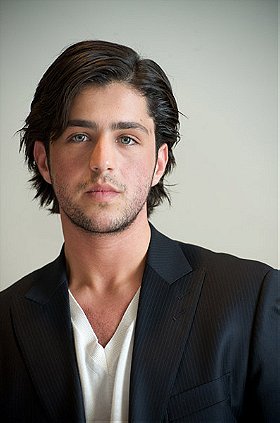 Peck was born in the Hell's Kitchen area of Manhattan, New York City, where he attended The Professional Performing Arts School. His parents were unmarried at the time of his birth and Peck never knew his biological father. He grew up with his mother, Barbara, who is a career coach and his maternal grandmother. Peck had asthma during his childhood, and often stayed indoors watching old sitcoms. Peck has described himself as a "Jewish kid that grew up in New York City just trying to hustle and make it in life". He performed in children's musical theater at New York's TADA! Youth Theater when he was nine years old. He was inspired to become involved in stand-up comedy when he was eight years
old.

Peck subsequently appeared in local children's theater, as well as performed stand-up comedy at the Caroline's Comedy Club for the Audrey Hepburn foundation. At the age of 14, he was offered a role on Nickelodeon's The Amanda Show and, at his mother's suggestion, accepted the part and moved to Los Angeles to further pursue an acting career.

Peck made his film debut in the 2000 film, Snow Day and appeared regularly on The Amanda Show until the end of its run in 2002. He also starred opposite Alex D. Linz and Zena Grey in the theatrical film, Max Keeble's Big Move, which was released on October 5, 2001. In 2001, he guest starred in an episode of the popular NBC drama ER called Thy Will Be Done. During this time period, Peck appeared in several independent films, including Spun and 2004's Mean Creek, for which he received critical praise. He was cast as Josh Nichols, opposite Drake Bell's Drake Parker, in another Nickelodeon sitcom, Drake & Josh, which began airing in 2004 and gained Peck recognition among young audiences. Josh's character, Josh Nichols, was smart, funny, and organized. In Drake and Josh, Josh was always being tormented along with Drake Bell's character Drake Parker by Miranda Cosgrove's character Megan Parker. Both characters sing in a remake of the song "Soul Man" by Sam and Dave. In 2006, Bell and Peck starred in their own TV movie called Drake & Josh Go Hollywood, and in 2007, they starred in a sequel called Drake & Josh: Really Big Shrimp. Josh was nominated for Favorite Television Actor at the 2008 Nickelodeon Kids' Choice Awards for his work on Drake & Josh. Peck also made his debut as a director in the Drake & Josh episode, Battle of Panthatar. He has also appeared in the series finale of What's New, Scooby-Doo?, an episode of Codename: Kids Next Door called Operation: C.A.K.E.D.-F.I.V.E., and the direct-to-video New Line Cinema film Havoc. Peck also performed in "Merry Christmas, Drake and Josh as Josh Nichols".

In 2006, Peck appeared in the independent film Special, which premiered at the Sundance Film Festival, and he voiced Eddie, one of two possum brothers, in the animated sequel, Ice Age: The Meltdown, which was released on March 31 of that year. Peck played a high school bully in 2008's Drillbit Taylor, and starred in the films The Wackness (released July 2008), American Primitive, Safety Glass, and Ice Age: Dawn of the Dinosaurs. Josh Peck will also star in a new movie called The Hearts of Men, which said to be released this year.He will also appear in the 2010 remake of Red Dawn.

Peck's favorite actors and inspirations are Richard Pryor, Jackie Gleason, Jerry Lewis, Bill Cosby, Ben Kingsley, and Morgan Freeman. Peck, like his real-life best friend Drake & Josh co-star Drake Bell, plays the piano. In the third season of Drake & Josh, Peck was significantly thinner than he used to be, and by the fourth season of the show, he had lost even more weight. According to a 2006 interview, Peck stated that:“I made a conscious effort to lose weight because I knew I could be happier as well as being healthier. I started by going on a diet a year and a half ago and I got a personal trainer, but I definitely have a healthier lifestyle now. Also I feel that because I do so much television, I am a better role model. I don’t really understand why I should be a role model, but I know that kids do look up to me, so it is my responsibility to motivate people and be inspiring. I hope that I can do that for kids. It doesn't really matter what you look like though, it is who you are that matters, of course. ... (more) (less)
Tags: Beautiful (2), Loud (2), Scorpio (2), Drake And Josh (2), Born In 1986 (2), Blue Eyes (1), Former Nickelodeon Star (1), Spun (1), Youtuber (1), Born In November (1), I Would Do Him (1), Drake & Josh (1), Lost Weight (1), Was Fat (1), Falls (1), Funny (1), Skinny (1), Youtube (1), Actor (1), Male (1)
My tags:

1. How I Met Your Father

yellowhair voted for an image 1 month, 2 weeks ago

Minerva13 voted for an image 12 months ago

Darthmasco added this to a list 2 years, 7 months ago
Scorpio (322 person items)

IsabellaSilentRose added this to a list 5 years, 3 months ago
MTV VMA's 2017 (78 person items)

Monstermaster added this to a list 6 years, 9 months ago
Celebrities I Wish To Meet (29 person items)