As the frontman for Type O Negative, Steele was known for his vampiric affect, towering stature, rich bass-baritone vocals, and a dark, often self-deprecating sense of humor. His lyrics were often intensely personal, dealing with subjects including love, loss, and addiction.

Peter Steele died of heart failure on April 14, 2010 at the age of 48. Prior to his death, Steele had been enjoying a long period of sobriety and improved health and was imminently due to begin writing and recording new music.

Love you to death, Pete. 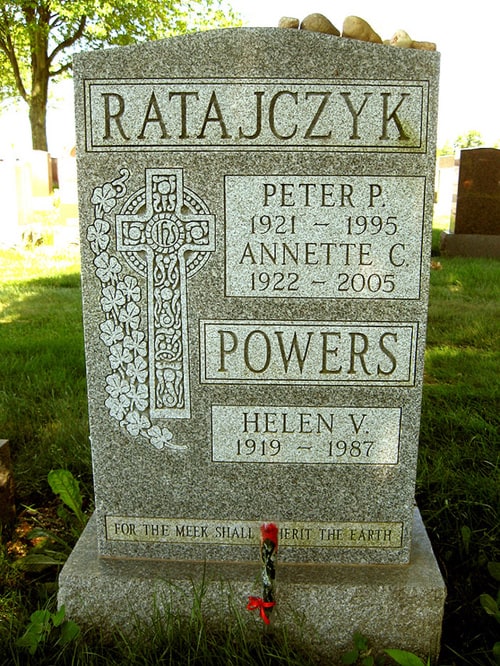 Ronald James Padavona (July 10, 1942 – May 16, 2010), better known as Ronnie James Dio, was an American heavy metal vocalist and songwriter. He was widely hailed as one of the most powerful singers in heavy metal, renowned for his consistently powerful voice.

He often ranks as one of the greatest rock vocalists of all time in various online polls and lists. He is credited with popularizing the "metal horns" hand gesture in metal culture.

Dio died of stomach cancer on May 16.

All eyes see the figure of the wizard as he climbs to the top of the world. 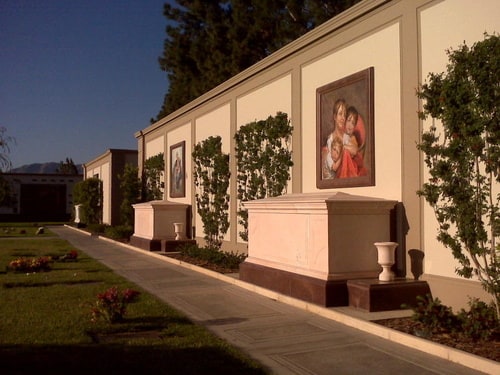 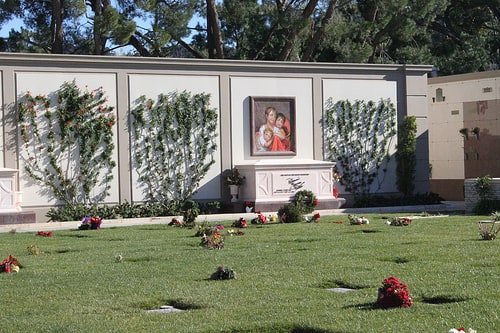 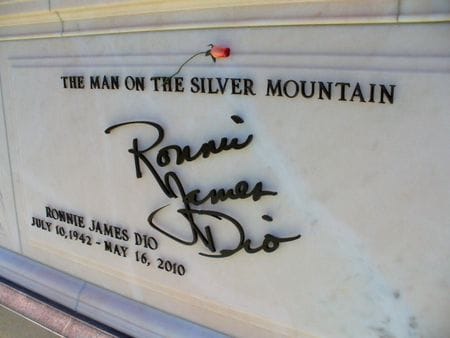 Darrell Lance Abbott (August 20, 1966 – December 8, 2004), also known as Diamond Darrell and Dimebag Darrell, was an American guitarist. He was best known as a founding member of the heavy metal bands Pantera and Damageplan. Darrell is considered to be one of the driving forces behind groove metal.

Abbott was shot and killed while on stage during a Damageplan performance on December 8, 2004, at the Alrosa Villa in Columbus, Ohio. 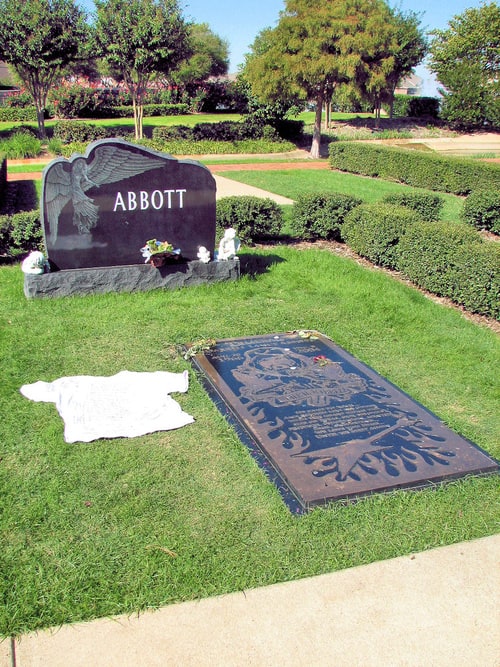 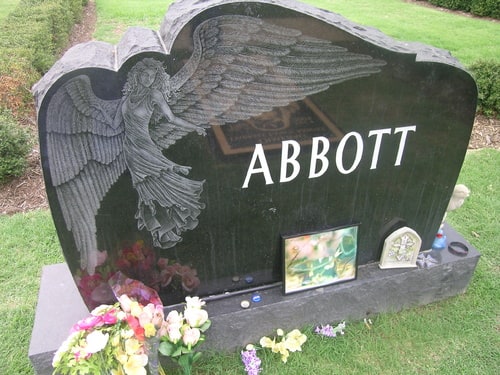 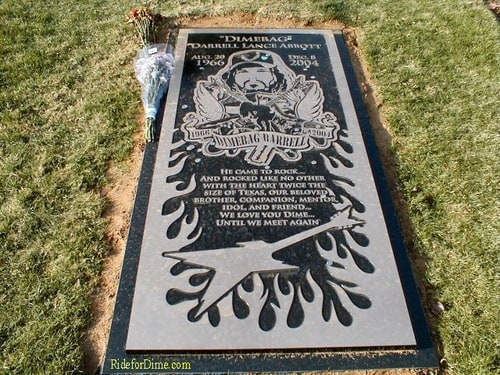 Burton was known for his "lead bass" approach, in which the bass played a melodic and soloist role, in addition to holding down the harmonic and rhythmic foundation of the band.

On September 27, 1986, Burton died when the band's tour bus over-turned in rural southern Sweden. Burton was posthumously inducted into the Rock and Roll Hall of Fame with Metallica on April 4, 2009.

Thanks for the Orion, man 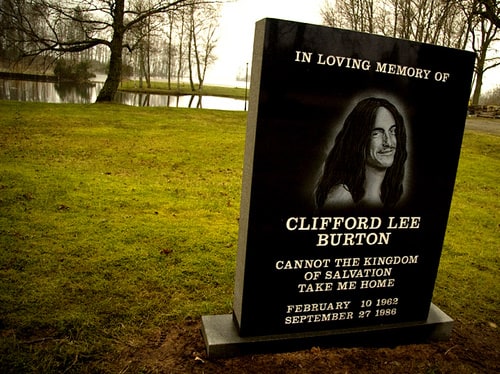 Miika Tenkula (6 March 1974 – 18 February 2009) was a Finnish heavy metal musician. He was the lead guitarist and the main songwriter for the band Sentenced until it disbanded. He was also the band's original vocalist from 1989 to late 1992.

Miika Tenkula was found dead on February 19, 2009 in his home. He had a serious drinking problem which escalated after Sentenced disbanded. An autopsy revealed that he had suffered from a genetic heart condition, and suffered a heart attack. He is buried at the Kirkkosaari cemetery in Muhos, Finland.

Lower the flags, a good man has passed. 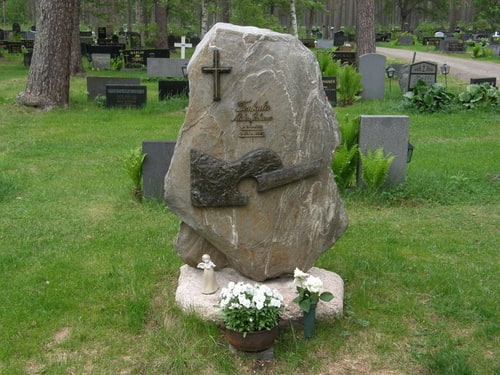 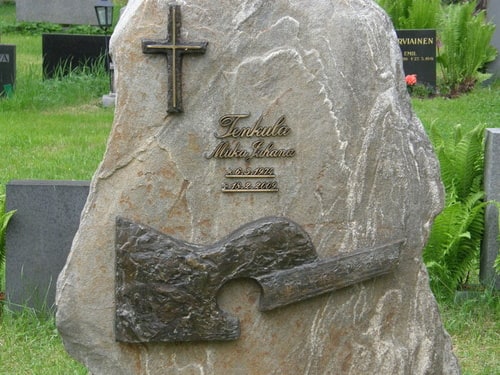 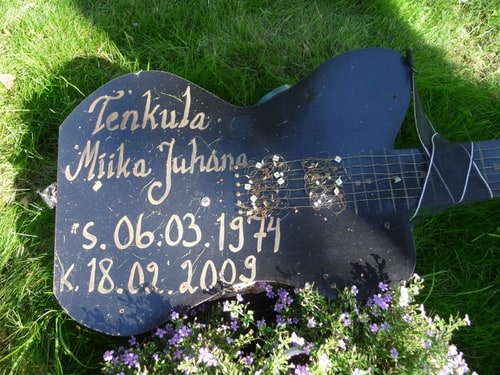 Kurt Donald Cobain (February 20, 1967 – April 5, 1994) was an American singer-songwriter, musician and artist, best known as the lead singer and guitarist of the grunge band Nirvana.

Cobain however was often uncomfortable and frustrated, believing his message and artistic vision to have been misinterpreted by the public, with his personal issues often subject to media attention. During the last years of his life, Cobain struggled with heroin addiction, illness and depression. He also had difficulty coping with his fame and public image, and the professional and lifelong personal pressures surrounding himself and his wife, musician Courtney Love.

On April 8, 1994, Cobain was found dead at his home in Seattle, the victim of what was officially ruled a suicide by a self-inflicted shotgun wound to the head. The circumstances of his death have become a topic of public fascination and debate.

You were right, it's better to burn out than to fade away. 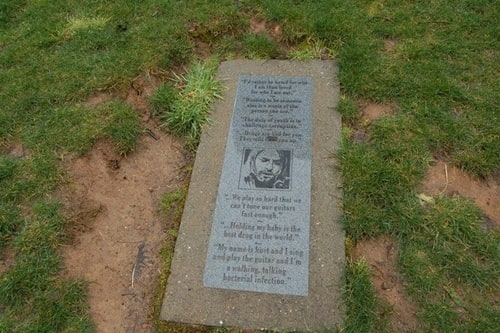 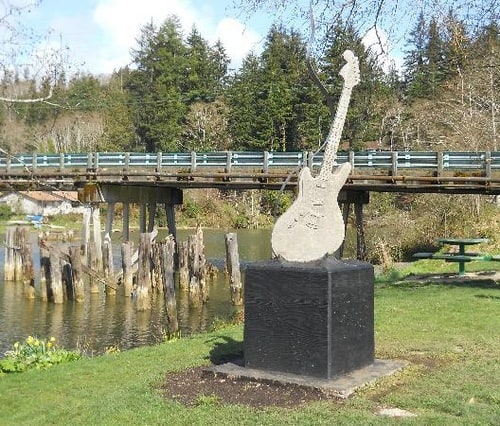 Joey Ramone (born Jeffry Ross Hyman; May 19, 1951 – April 15, 2001) was an American vocalist and songwriter, best known as the lead vocalist in the punk rock band the Ramones. Joey Ramone's image, voice and tenure as frontman of the Ramones made him a countercultural icon.

Joey Ramone died of lymphoma at New York-Presbyterian Hospital on April 15, 2001, after a seven-year battle. He was reportedly listening to the song "In a Little While" by U2 when he died.

You're the greatest rock 'n' roller in the world. 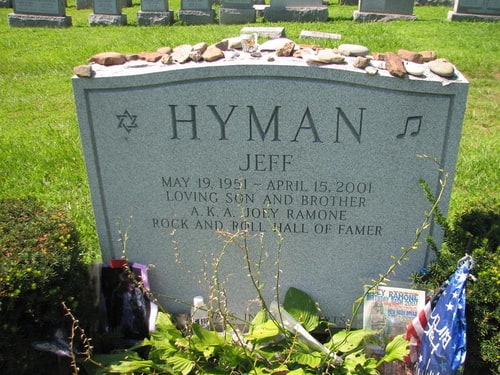 Randall William Rhoads (December 6, 1956 – March 19, 1982) was an American heavy metal guitarist who played with Ozzy Osbourne and Quiet Riot. A devoted student of classical guitar, Rhoads often combined his classical music influences with his own heavy metal style. He is included in several 'Greatest Guitarist' lists.

He died in a unplanned airplane excursion, when the plane crashed into the Ozzy Osbourne's tour bus.

Why did you agreed to do the third "buzz"... 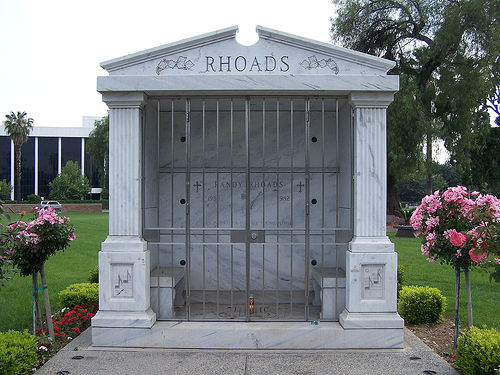 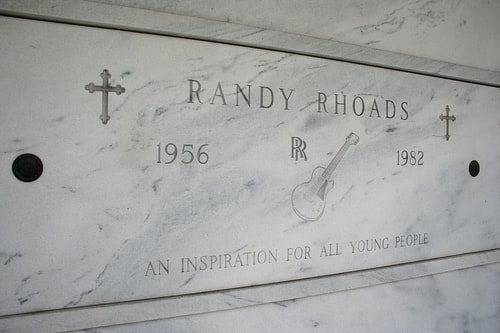 James Douglas "Jim" Morrison (December 8, 1943 – July 3, 1971) was an American musician, singer, and poet, best known as the lead singer and lyricist of the rock band The Doors.

Following The Doors' explosive rise to fame in 1967, Morrison developed a severe alcohol and drug dependency which culminated in his untimely death in Paris in 1971 at age 27, due to a suspected heroin overdose. However, the events surrounding his death continue to be the subject of controversy, as no autopsy was performed on his body after death, and the exact cause of his death is disputed by many to this day. 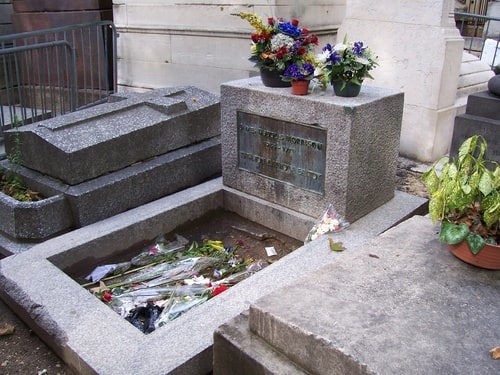 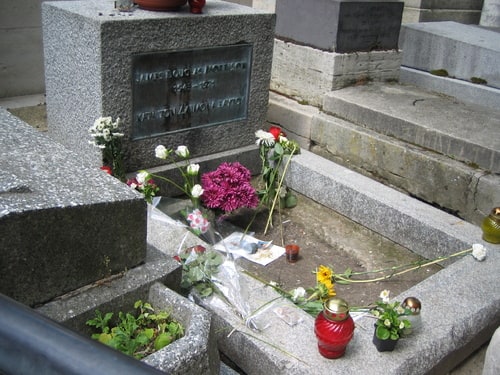 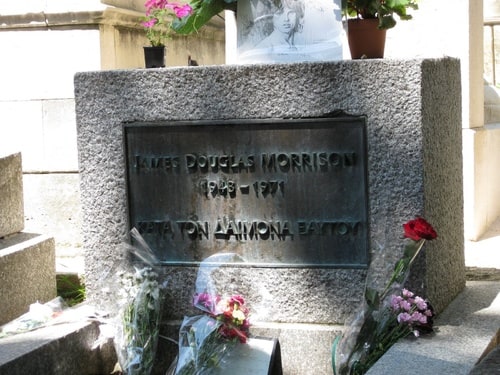 James Marshall "Jimi" Hendrix (born Johnny Allen Hendrix; November 27, 1942 – September 18, 1970) was an American guitarist and singer-songwriter. He is widely considered to be the greatest electric guitarist in musical history, and one of the most influential musicians of his era across a range of genres.

He was a heavy user of drugs and was most likely under the influence of other narcotics than specified. He had taken 9 tablets of the prescribed sleeping pill Vesparax, 4 1/2 the prescribed dose. He had also been drinking red wine excessively the night before. So some time on the night of September 18, 1970, Hendrix asphyxiated on his own vomit in his sleep. This was confirmed by the autopsy. 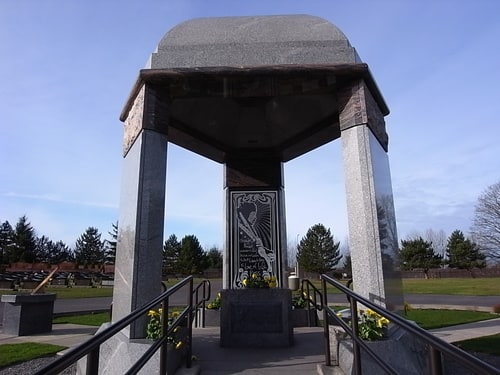 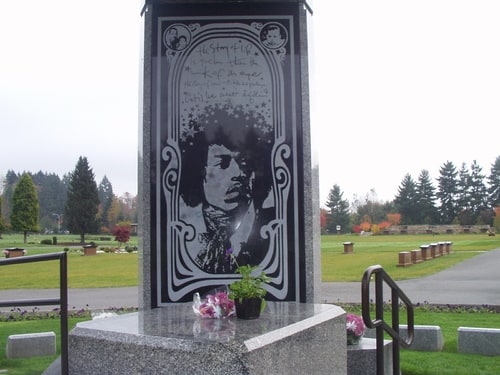 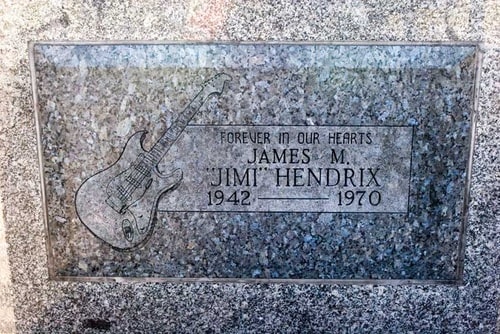 David W. "Dave" "Stage" Williams (February 29, 1972 – August 14, 2002) was the lead singer for the band Drowning Pool. He grew up in Princeton, Texas living with his parents Charles Edward and Jo-Ann Williams. During the 1990s he was a fixture in the Dallas music scene, often playing in well-known clubs. In 1999, he joined Drowning Pool. The band released the album Sinner in 2001.

A statement from his band mates during his funeral states that he was a gentle man who always made a point to give at least one person "The Gift"; especially to his fans. It is not known what this gift actually was, though it was said to be large enough to "fit into a cigar box".

On August 14, 2002, Williams was found dead while on the band's tour bus in Manassas, Virginia. The 30-year-old singer died from cardiomyopathy, a disease of the heart.


Too early Dave. Too early. 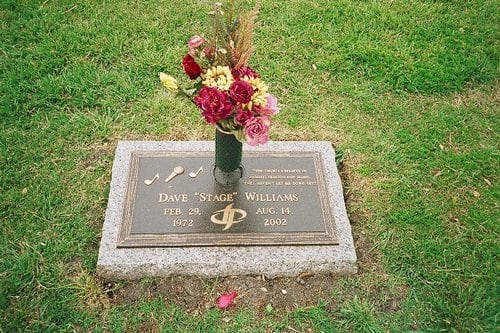 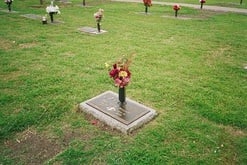 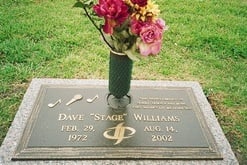 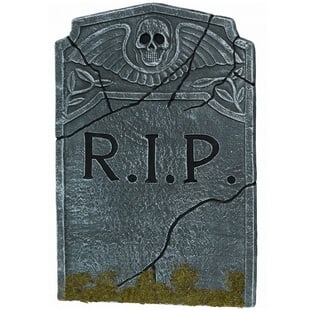 Orlok's Movie Journal has risen from the grave!
9 item list by Orlok
23 votes

Quiet as the Grave: The Silent Killers of Film & T
9 item list by moviebuff

Brad Pitt: Movies i have seen. by Aprakadabra

Some of my favourite composers by Maki

Most Successful Movies of... Tobey Maguire by SchwarzerAbt