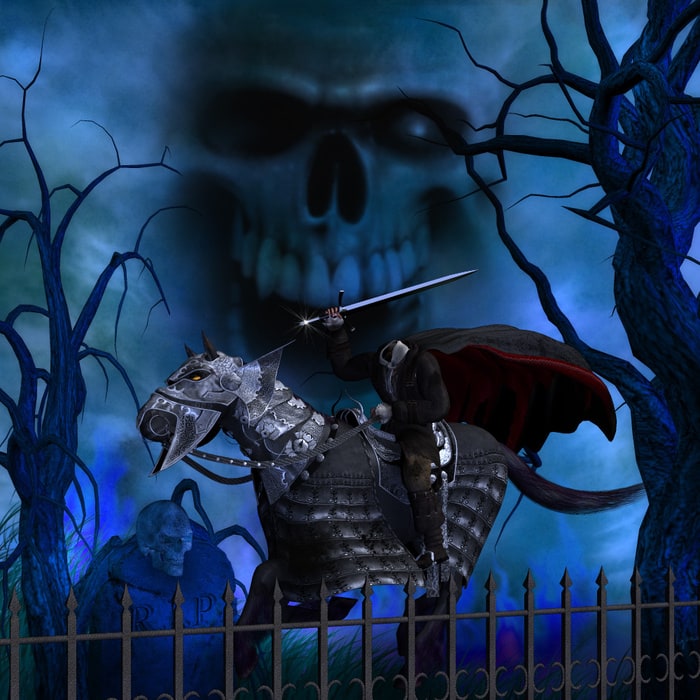 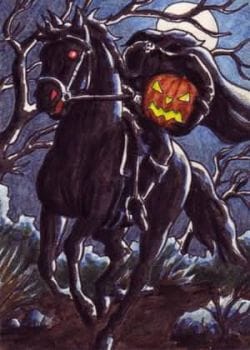 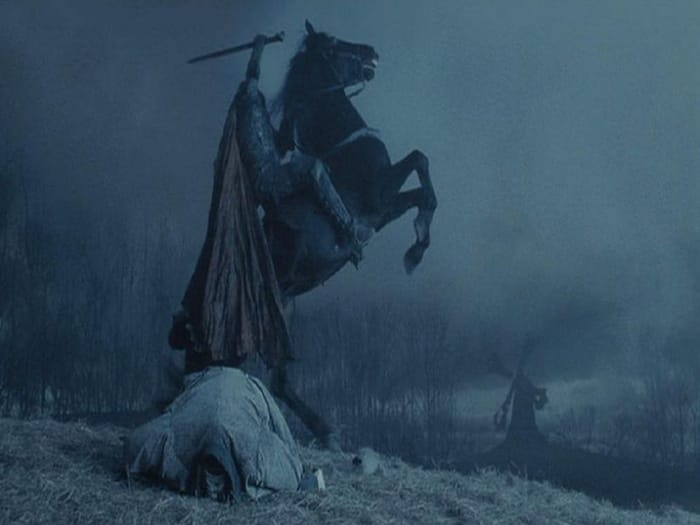 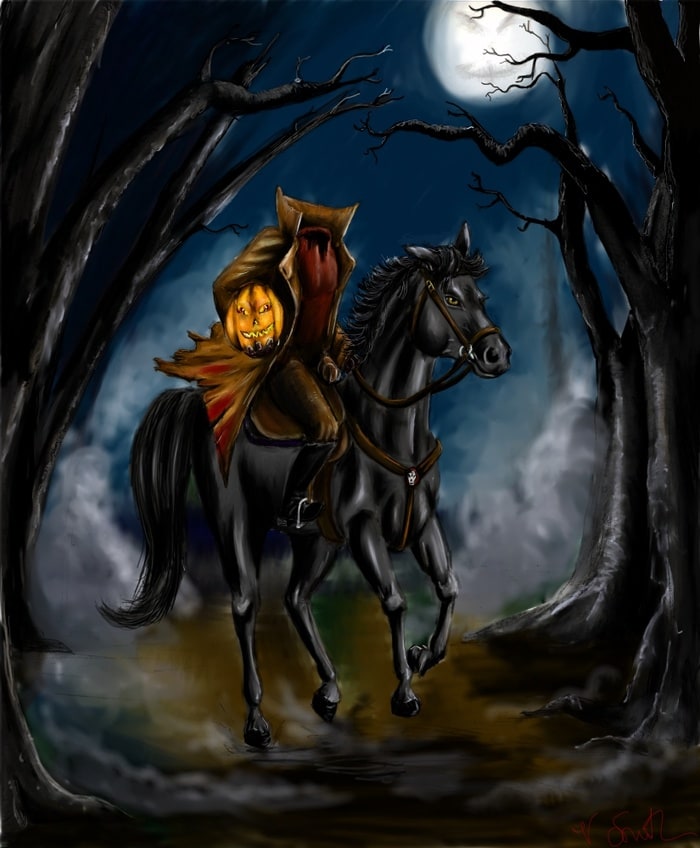 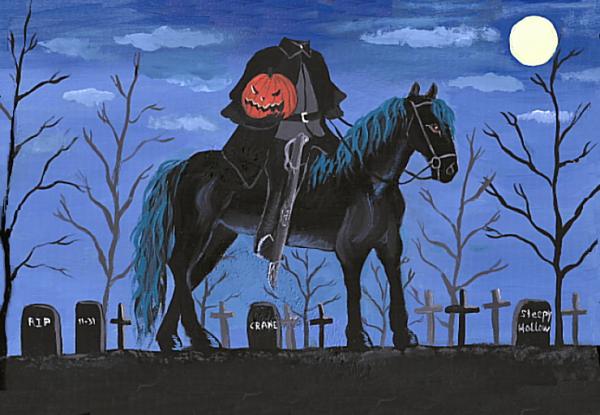 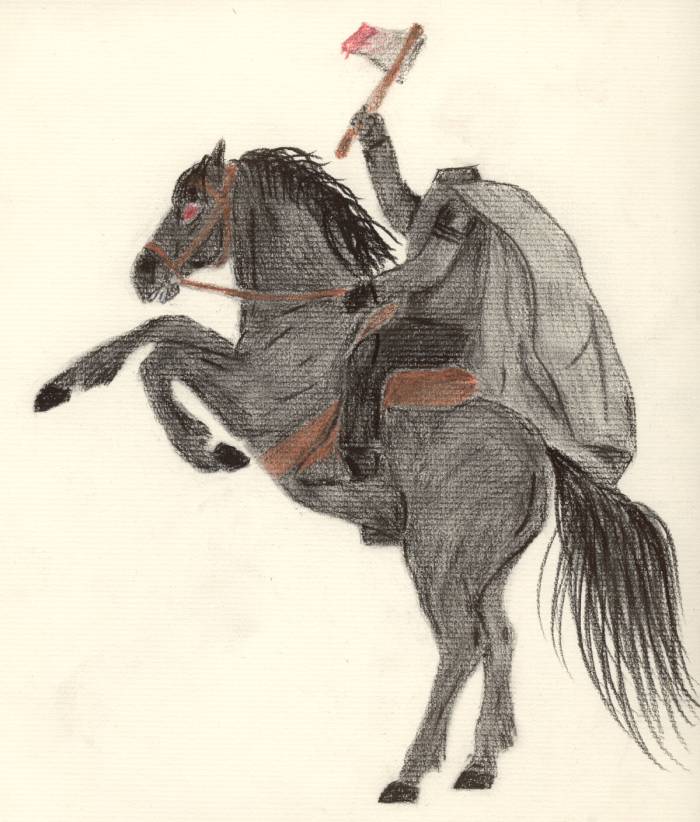 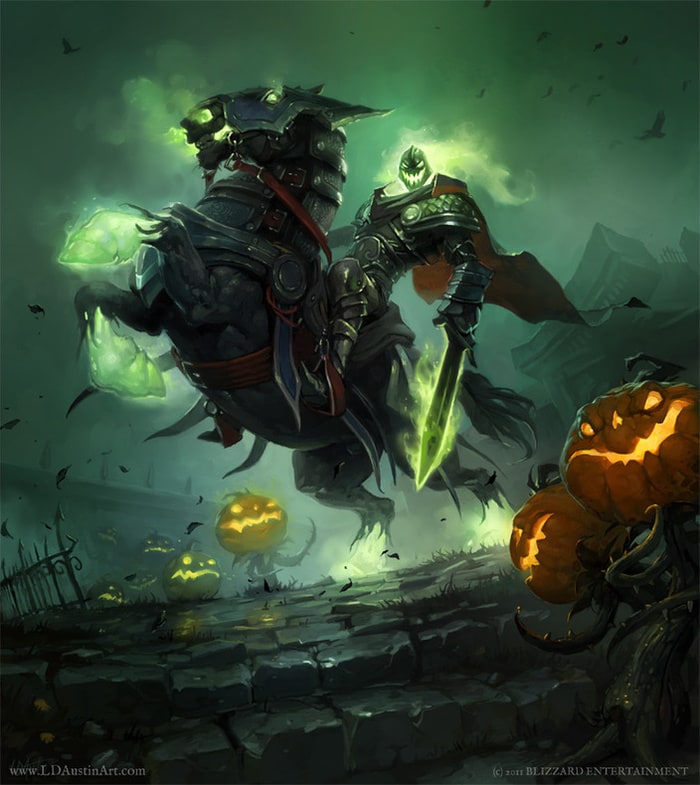 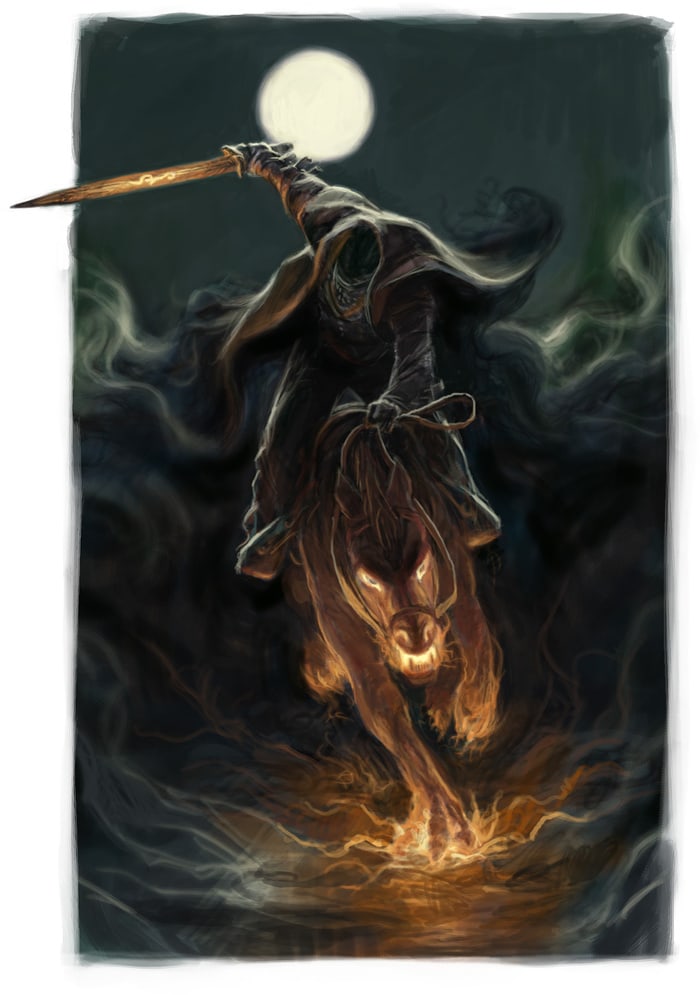 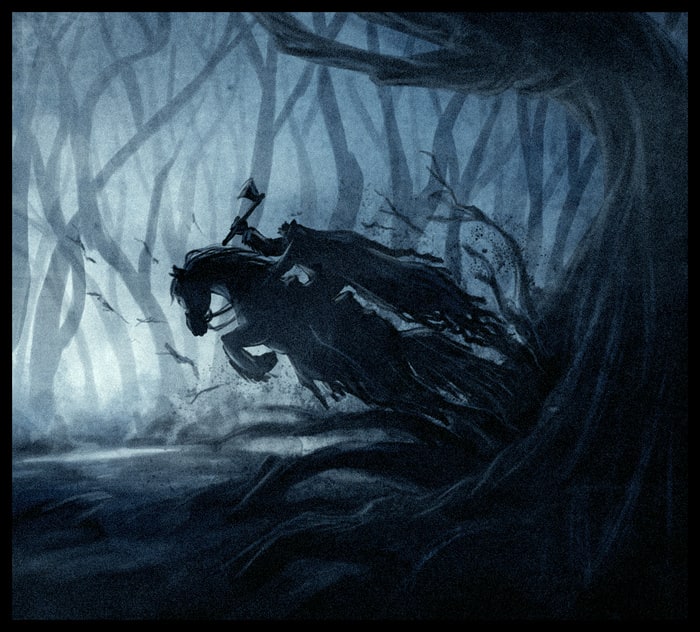 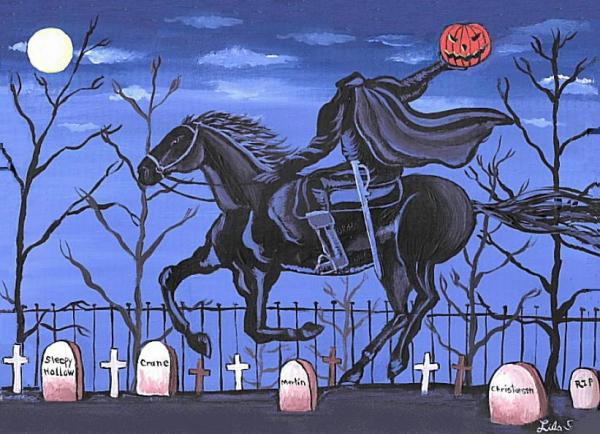 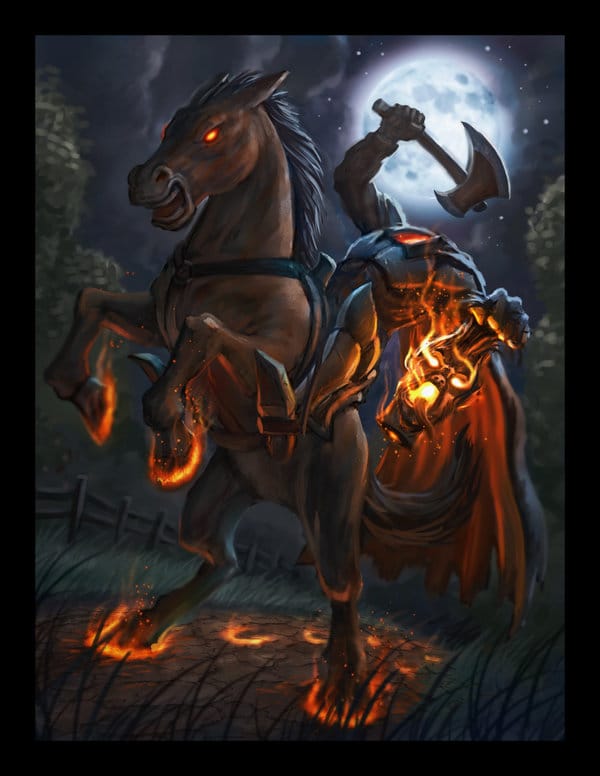 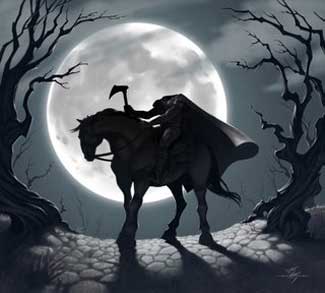 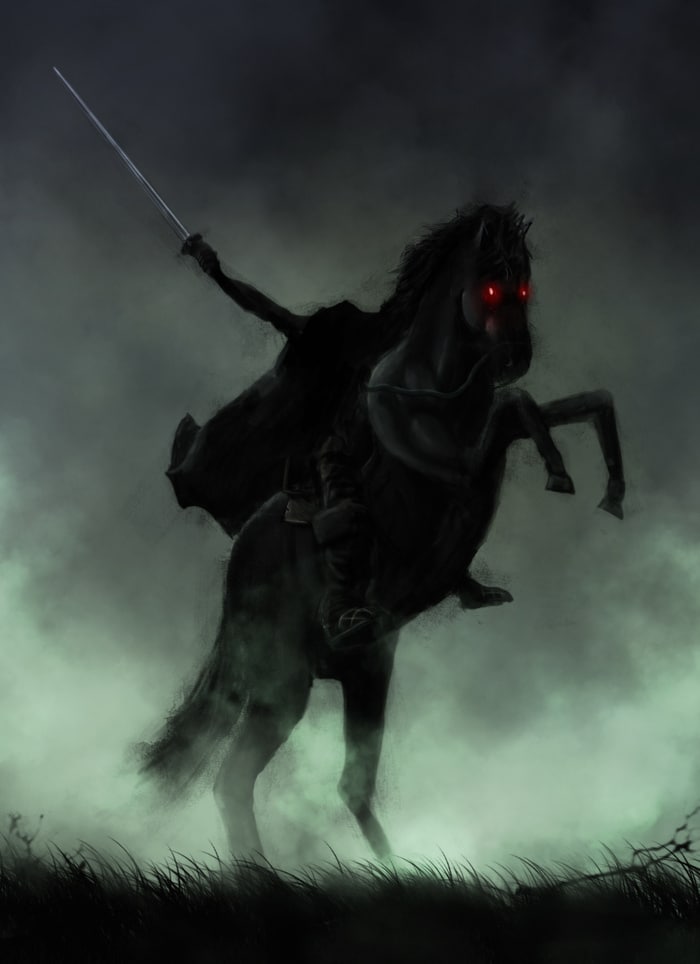 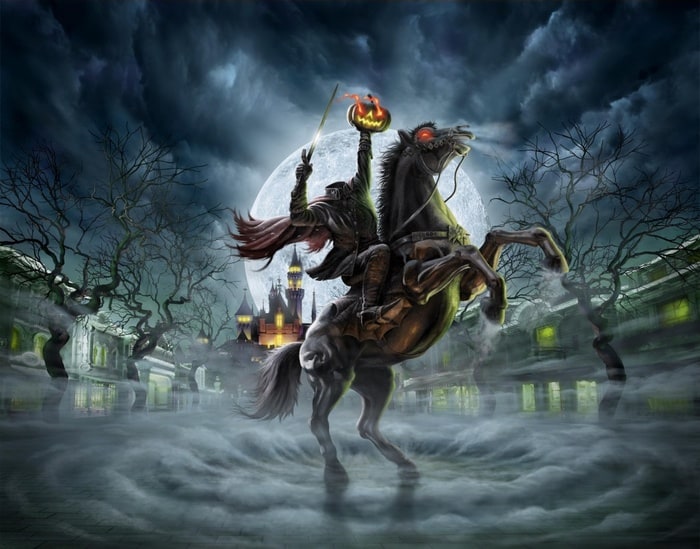 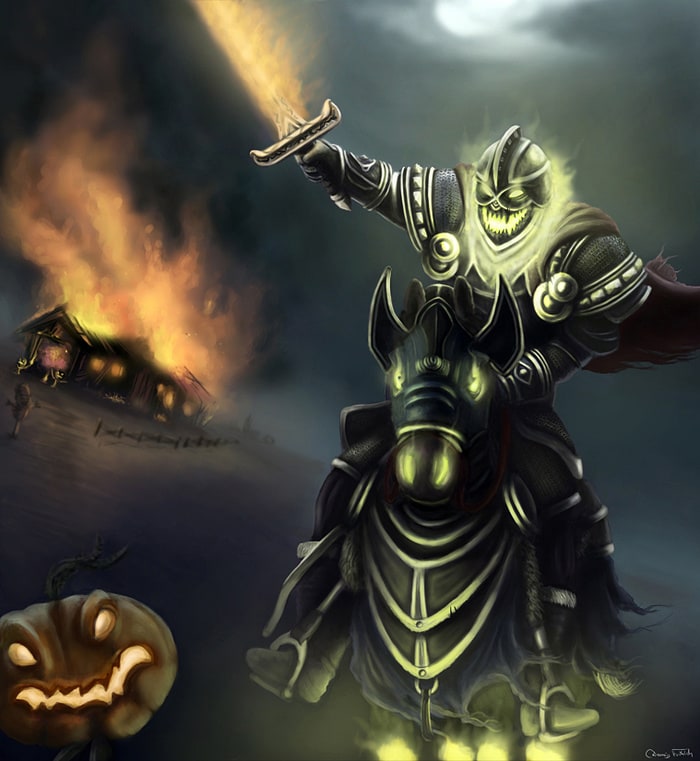 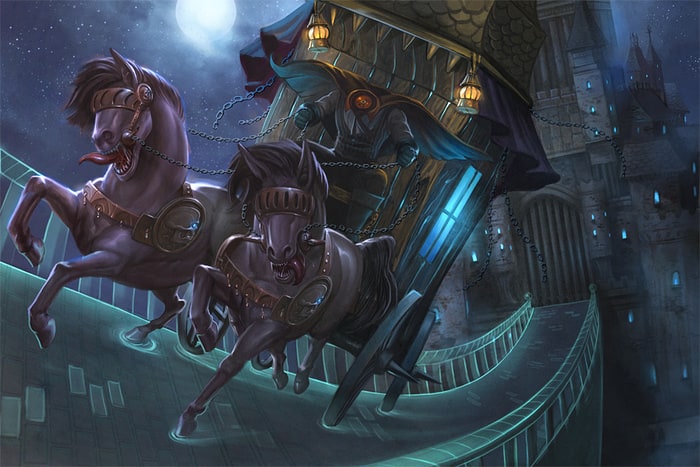 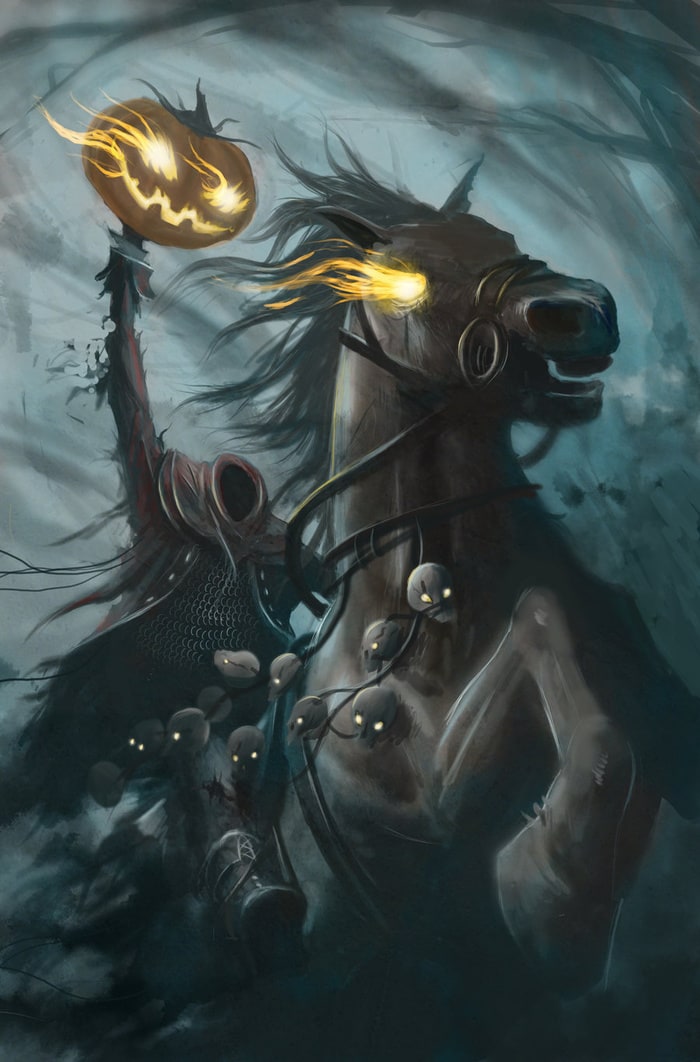 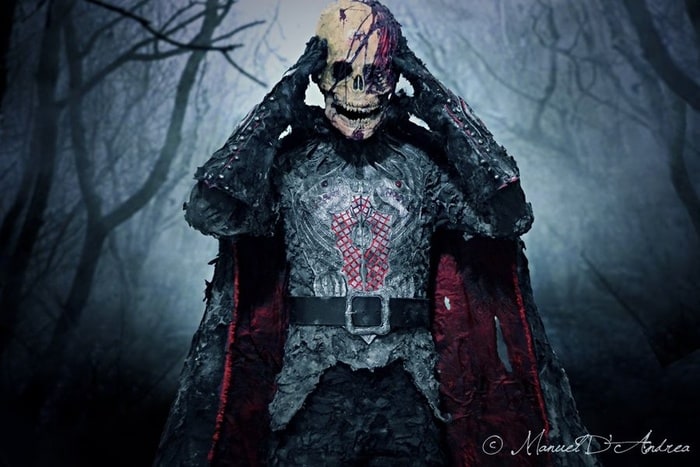 Load more items (10 more in this list)
This is a project between me and Joe aka Iceviper on here,imposible not to have heard of him,he is very popular among many users on this site. We share a lot of things together like music,love for art and the thirst for misteries and unconventional.We expect you to vote and actually leave a comment.

One cold winter night, early in the New Year, a certain Dutchman left the tavern in Tarrytown and started walking to his home in the hollow nearby. His path led next to the old Sleepy Hollow cemetery where a headless Hessian soldier was buried. At midnight, the Dutchman came within site of the graveyard. The weather had warmed up during the week, and the snow was almost gone from the road. It was a dark night with no moon, and the only light came from his lantern.

The Dutchman was nervous about passing the graveyard, remembering the rumors of a galloping ghost that he had heard at the tavern. He stumbled along, humming to himself to keep up his courage. Suddenly, his eye was caught by a light rising from the ground in the cemetery. He stopped, his heart pounding in fear. Before his startled eyes, a white mist burst forth from an unmarked grave and formed into a large horse carrying a headless rider.

The Dutchman let out a terrible scream as the horse leapt toward him at a full gallop. He took to his heels, running as fast as he could, making for the bridge since he knew that ghosts and evil spirits did not care to cross running water. He stumbled suddenly and fell, rolling off the road into a melting patch of snow. The headless rider thundered past him, and the man got a second look at the headless ghost. It was wearing a Hessian commander's uniform.

The Dutchman waited a good hour after the ghost disappeared before crawling out of the bushes and making his way home. After fortifying himself with schnapps, the Dutchman told his wife about the ghost. By noon of the next day, the story was all over Tarrytown. The good Dutch folk were divided in their opinions. Some thought that the ghost must be roaming the roads at night in search of its head. Others claimed that the Hessian soldier rose from the grave to lead the Hessian soldiers in a charge up nearby Chatterton Hill, not knowing that the hill had already been taken by the British.

Whatever the reason, the Headless Horseman continues to roam the roads near Tarrytown on dark nights from that day to this.

Author's Note: This is a retelling of the folktale which was used by Washington Irving to create his masterpiece, The Legend of Sleepy Hollow.

Dullahans themselves are headless and carry their severed head with them, either tucked underneath their arm or raised high in their right hand. The head is the color and texture of stale, dried out dough or moldy cheese. It sports a hideous grin and has small black eyes that dart back and forth. The whole head glows like the phosphorous in decaying matter and the horseman uses his 'lantern' to find his way along the darkened roads of the Irish countryside.

Wherever a dullahan stops, a mortal dies. All gates fly open to let rider and coach through, no matter how firmly they are locked, so no one is truly safe from the attentions of this fairy.

The dullahan appears as an omen of death to families in Ireland. He is possessed of supernatural sight. By holding his severed head aloft, he can see for vast distances across the countryside, even on the darkest night. Using this power, he can spy the house of a dying person, no matter where they lie. Irish folk who watch from their windows to see him pass are rewarded for their pains by having a basin of blood thrown in their faces, or by being struck blind in one eye.

In fear of the headless rider; men alone in the fields at night cower behind the bushes because of his reputation with a whip. With his whip he can accurately remove the eyes of all mortals foolish enough to spy on his ventures. Since he has no head, he is somewhat defective in his physical sight and the dullahan resents those with skilled vision.

The dullahan has limited speech. He can only speak once on each journey he undertakes, and that is when he pulls up a home and calls out the name of the person who is dying.

The origins of the dullahan are not known for certain, but he is thought to be the embodiment of an ancient Celtic god, Crom Dubh, or Black Crom. Crom Dubh was worshipped by the prehistoric king, Tighermas, who ruled in Ireland about fifteen hundred years ago and who legitimized human sacrifice to heathen idols. Being a fertility god, Crom Dubh demanded human lives each year, the most favored method of sacrifice was decapitation. The worship of Crom continued in Ireland until the sixth century, when Christian missionaries arrived from Scotland. They denounced all such worship and under their influence, the old sacrificial religions of Ireland began to lose favor. Nonetheless, Crom Dubh was not to be denied his annual quota of souls, and took on a physical form which became known as the dullahan or far dorocha (meaning dark man), the tangible embodiment of death.

Unlike the banshee, the dullahan does not pursue specific families and its call is a summoning of the soul of a dying person rather than a death warning. There is no real defense against the dullahan because he is death's herald. However, an artifact made of gold may frighten him away, for dullahan's appear to have an irrational fear of this precious metal. Even a small amount of gold may suffice to drive them off.

On nights of Irish feast days, it is advisable to stay at home with the curtains drawn; particularly around the end of August or early September when the festival of Crom Dubh reputedly took place. If you have to be abroad at this time, be sure to keep some gold object close to hand.

The fictional tale of the Headless Horseman is based on some true facts.


The story of the Headless Horseman takes place during the 1790s in a community referred to as ""Sleepy Hollow"" near Tarrytown, New York. Ichabod Crane (a schoolmaster from Connecticut) competes with Abraham ""Brom Bones"" Van Brunt (the local thug) for the hand of Katrina Van Tassel (daughter of a wealthy farmer). According to the story, a Hessian trooper (who lost his head to a cannonball during the American Revolution) was buried near the Old Dutch Church and was known to haunt the area every night in search of his missing head, harming anyone who stands in his way. One autumn night as Crane leaves a party at the Van Tassel Home, he encounters this Headless Horseman and is never heard from again.

Although the story itself is fictional, it is largely inspired by reality. The final showdown between Ichabod Crane and the Headless Horseman occurs on a bridge near the location where the Horseman is buried. The Old Dutch Burying Ground, the alleged gravesite of the Horseman, still stands in the Village of Sleepy Hollow. The bridge mentioned in the story is referred to as the ""Horseman's Bridge"" and still exists as well although today takes on a more modern appearance. Additionally, the characters themselves are based on real residents of the area. It is believed that the character of Ichabod Crane was based on Jesse Merwin, a schoolteacher in Kinderhook. Although Kinderhook is further north in Columbia County, Washington Irving spent several months in Kinderhook during 1809, well before he published his story in 1820. Similarly, Katrina Van Tassel is thought to have been based Eleanor Van Tassel Brush, with her name coming from Eleanor's aunt Catriena Ecker Van Texel. The gravesites of the Van Tassels, along with the supposed gravesite of the Headless Horseman, are still located within Old Dutch Burying Ground.

26 votes
Why I Love Monsters (80 lists)
list by Monstermaster
Published 8 years, 4 months ago

A Dancing Natalie by Fimc14

These cute golden retrievers by Milena

Piracy is the way o life. Ahoy. by Katherine Fell

Dark and Mystical Landscapes I by Katherine Fell