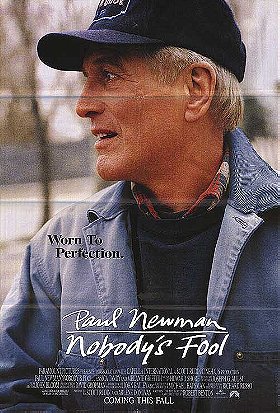 129 votes
Can't We Be Dysfunctional Like A Normal Family? (50 items)
list by The Mighty Celestial
Published 12 years, 9 months ago

JxSxPx
I’m all for any excuse to sit back and watch Paul Newman act. Nobody’s Fool is a late-period masterpiece of a performance from Newman. The movie surrounding it isn’t too shabby either, but the heart of the matter is that Nobody’s Fool operates best as a character portrait of a damaged man trying to make good. Or not so much “make good,” as he has change and the opportunity for growth a... read more
View all Nobody's Fool reviews

Nusch added this to a list 9 months, 3 weeks ago
Films About Aging and the Elderly (148 movies items)

BradWesley123 added this to a list 2 years, 6 months ago

" Starz- 1hr. 50min. First Viewing Robert Benton expertly tells a small, nuanced story of missed opportunities and regrets, how quickly a life can get away from you. He also illustrates one of the most realistic and natural visions of small town life in cinematic history. He's aided by a terrific cast, lead by, most importantly, Paul Newman in one of his finest performances. The film would, probably, work with another actor in the role, but it would be hard to fathom someone imbuing the whole fil"

BradWesley123 voted for an image 2 years, 6 months ago

Georgini voted for an image 2 years, 6 months ago

perod voted for an image 2 years, 9 months ago

Exclusive added this to a list 4 years, 5 months ago
My Favorite Actors: Bruce Willis (57 movies items)

Nusch voted for an image 4 years, 7 months ago

The Mighty Celestial added this to a list 5 years, 4 months ago

" Living a life with just enough to get by, "Sully" Sullivan seems okay with just that despite the years piling on. When his estranged son comes to town with his own son in tow, "Sully" starts to feel the twinges of patriarchal charge towards the grandson he never knew had. Moving through the typical "atypical" happenings of his small town, Sully finds the pieces of his life starting stitch together in a way in which he must decide to either just keep crustily cruisin' by, or, to do that one thi"

Exclusive voted for an image 5 years, 10 months ago