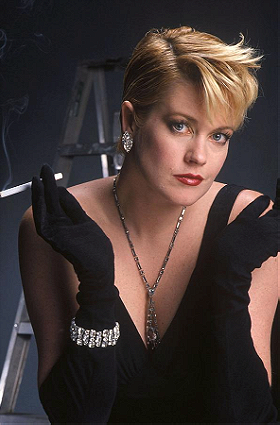 117 votes
Celebrities and their offspring (62 items)
list by Coby
Published 11 years, 8 months ago

Griffith's next starring role was in the urban thriller Pacific Heights (1990) with Matthew Modine. She worked continuously throughout the 1990s, starring in many films including The Bonfire of the Vanities (1990), A Stranger Among Us (1992), Born Yesterday (1993), Milk Money (1994), Now and Then (1995), and Two Much (1996), where she co-starred with future husband Antonio Banderas.

Griffith received a Golden Globe nomination for her performance in the successful TV movie Buffalo Girls (1995), alongside Anjelica Huston. In 1998 she appeared in Woody Allen's Celebrity with Kenneth Branagh and Leonardo DiCaprio. Later that year, she starred as a free-spirited heroin user in Another Day in Paradise (1998), a performance that some critics wrote was the best of her career.

In 1999, Griffith starred in Crazy in Alabama, a film that was directed by Banderas and produced by Greenmoon Productions, the company that she and Banderas formed together. In the film, Griffith played an eccentric woman who kills her husband and heads to Hollywood to become a movie star. Also in 1999, Griffith made her stage debut at the Old Vic in London, England, where she acted with Cate Blanchett in The Vagina Monologues. In the HBO film RKO 281, she played actress Marion Davies, and received an Emmy nomination for her portrayal.

Griffith's career cooled down in the early 2000s following her last major roles to date in the independent films Cecil B. Demented and Forever Lulu (aka Along for the Ride). In 2002, she voiced the character of Margalo the bird in Stuart Little 2. Since then, her appearances in films have been very infrequent and low-profile.

In 2003, Griffith made her Broadway debut playing Roxie Hart in the musical Chicago. Untrained in song and dance, she still impressed New York Times theatre critic Ben Brantley, who wrote: "Ms. Griffith is a sensational Roxie, possibly the most convincing I have seen" and "[the] vultures who were expecting to see Ms. Griffith stumble...will have to look elsewhere".Griffith's celebratory reviews made it a box office success. She returned to the stage in 2012 in a play that Scott Caan wrote titled "No Way Around but Through".

Griffith starred on the short-lived WB sitcom Twins (2005–06). Her career continued to suffer when her 2007 series Viva Laughlin was canceled after two episodes,[14][15] and her 2012 television pilot This American Housewife (produced by Banderas) was not picked up by Lifetime. In the interim, Griffith guest-starred on Nip/Tuck and Hot in Cleveland.

4. The Pirates of Somalia

franlob voted for an image 2 weeks ago

dramo posted a image 2 months ago

Maudea96 added this to a list 2 months, 1 week ago

Sparky The Barbarian voted for an image 2 months, 2 weeks ago

looksharp voted for an image 2 months, 3 weeks ago

TrekMedic voted for an image 2 months, 3 weeks ago

Sparky The Barbarian voted for an image 3 months, 1 week ago

Sparky The Barbarian voted for an image 3 months, 2 weeks ago

SomeBloke voted for an image 3 months, 3 weeks ago

Sparky The Barbarian voted for an image 4 months ago

amorginos voted for 13 images [View All] 1 year ago

amorginos voted for 2 images 1 year ago

amorginos voted for 2 images 1 year ago

amorginos voted for an image 1 year ago

moon9 posted a comment on this image 1 year, 7 months ago

hulkargh added this to a list 1 year, 8 months ago

One Actress, One Unforgettable Role (and more?) (19 person items)

lovedriver voted for 6 images [View All] 1 year, 9 months ago

usafsg voted for an image 1 year, 11 months ago