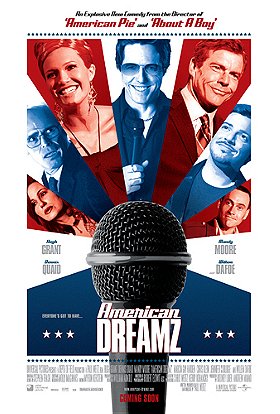 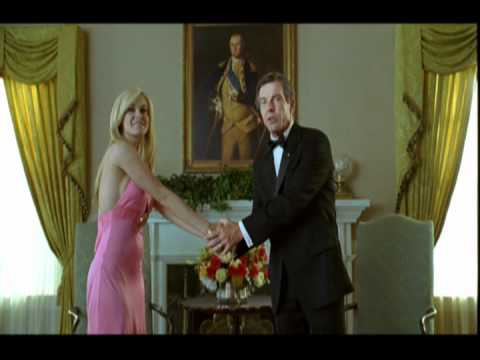 What the hell was this mess?

Prelude
1 vote
Was it supposed to be a sarcastic comedy? If so, where was the sarcasm? Heck, where was the comedy? Was it supposed to make fun of Bush? If so, don't they watch Daily Show or Colbert Report, to know how to really make fun of Bush? (hint, show bush using his own words, that does the trick). And what the bloody hell was that suicide bomber arab kid contestant near the end? what the ??? was t... read more

johanlefourbe
1 vote
Even though Hugh Grant has pretty much passed his prime, I still have a weak spot for him and I try to check his movies whenever I get the chance. To be honest, I thought this one was actually a nice surprise. Basically, it is a satire of 'Idols' and such talent shows and I thought it hit the right notes many times during the whole thing. First of all, there was also a pretty good cast (Hugh Gran... read more

A failed attempt at parody

thaskett
1 vote
I'd never heard of 'American Dreamz' before I came across it on Netflix one night. Now that I've seen the movie (I only watched it because I'm guilty of tuning in to those talent-based reality shows from time to time, so I was curious), I kind of wish that I could still say I'd never heard of it.

Martin Tweed is the host of a talent show called American Dreamz, and whilst he despises each new season, it's a hit with the ratings. Tweed decides it's time for a new and interesting batch of contestants, and sends out his team to find the weirdest bunch possible. Whilst all this is happening, the President of the United States is becoming more and more depressed, and relies on his Chief of Staff to talk him through everything, even into appearing as a judge on the TV show. Perfect news for the terrorists who use the talent contest as a way to reach the President.
Release date: 20 April 2006
Tags: Comedy (13), Satire (8), 2000s (5), Music (4), Terrorism (3), 2006 (3), American Idol (3), Reality Tv (2), Singer (2), Bomb (2), Limousine (2), Arab (2), Suicide Bomber (2), (2), Politics (1), Political (1), Bar (1), Television (1), Prison (1)
My tags:

Kandi added this to a list 4 years, 1 month ago

Leo added this to a list 6 years, 6 months ago
We Hate Movies Podcast (589 movies items)

mdhpiper voted for a review of American Dreamz 6 years, 7 months ago

“I'd never heard of 'American Dreamz' before I came across it on Netflix one night. Now that I've seen the movie (I only watched it because I'm guilty ”