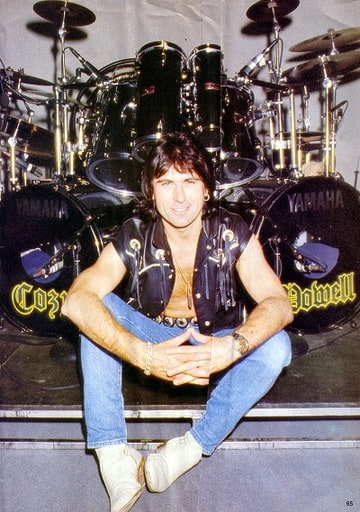 Everybody' scream : Why not Bonzo #1 !!!
Surely Cozy was influenced by Bonzo, who's rock drummer didn't it ?
But Bonzo spent his musical life in LedZep, Cozy served as volunteer for Jeff Beck, Ritchie Blackmore, Michael Shecker, David Coverdale and Keith Emerson and more. Some of them are REAL as****s...
But Cozy did it best... If Cozy had not that damn car crash, he will be around the world behind his Yamaha drumkit. 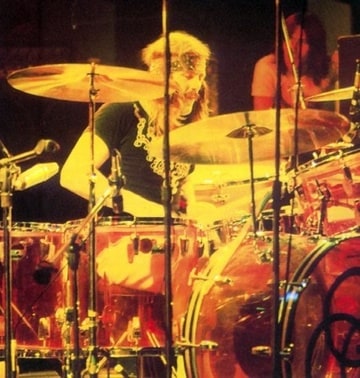 More than a simple drummer, the hammer of the Gods was the first and the best of the british skinbashers, every rock drummers referred to him, most are devoted to him. You are NOT a drummer if you're NOT able to play ROCK and ROLL.
What if... 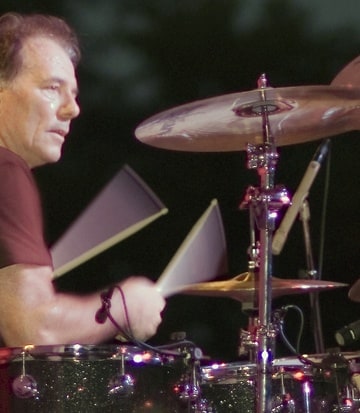 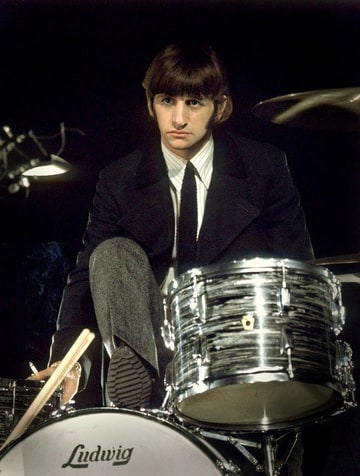 The father of american modern drummers and Zak Starkey of course.
Needs no presentations... 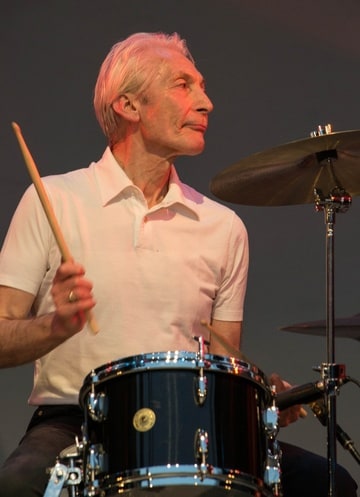 Playing Satisfaction for half century can be boring, be the tourbus leader of "The Rock'n Roll Band" maybe not.
His drumming has never evolved, the Glimmer Twins layed tunes on his pattern...from Brown Sugar to Hey Negrita, Jumpin' Jack Flash to Angie. The real Steel Wheel, iconic ! 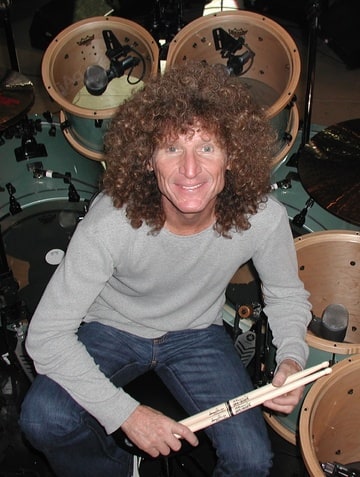 This dude from Mississippi is a journeyman, from Black Oak Arkansas to Ozzy, Whitesnake and many others, a double bassdrum pioner and a torrid percussionist...his drum solo hand2skin is the zenith of the gig, the only selling-tickets drummer.

Notable works :
Too much to list
Mass. Patriot's rating: 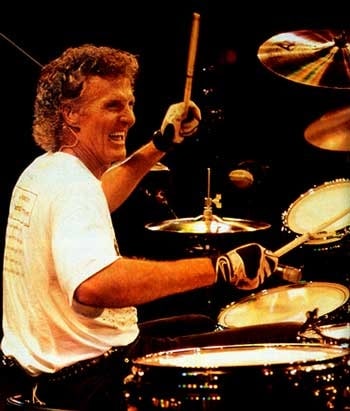 When in the summer of 73 "We're an American Band" cracked the Billboard album chart drums world will never be the same. So not only Tito Puente was able to play cowbell...Don Brewer did and sung this All America Tunes, seconds only to Free Bird...
Everybody pays tribute to this cowbell in 4, BÖC, Nazareth and later Def Leppard, Crüe, G'nR, SNL...yes MORE COWBELL !!!
Hey Don what's about SweSweet Connie ? 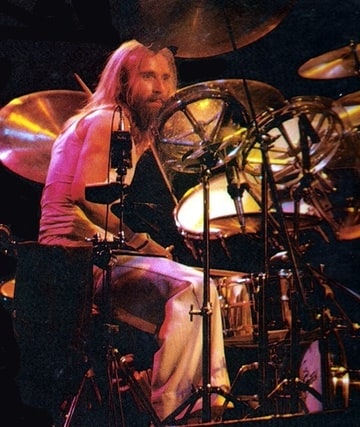 Love him or hate him this londoner, with his drum twin brother Chester Thompson, sold over 250 millions record copies, with the power of a heavy hitters and the skills of a jazz masters he refreshed the drum sound with a bunch of solid tunes apparently easy and catchy.
Try to divided the well know "Turn It On Again" in 4 if you can...
Now he must surrend to the pain and leave his Vic Firth signature in the sticksbag...what a loss !

Live Aid July 13th 1985 : Phil was the only artist playing in both stage Wembley Arena in London with Genesis and JFK Stadium in Philadephia as solo artist. Concorde aircraft helped him. 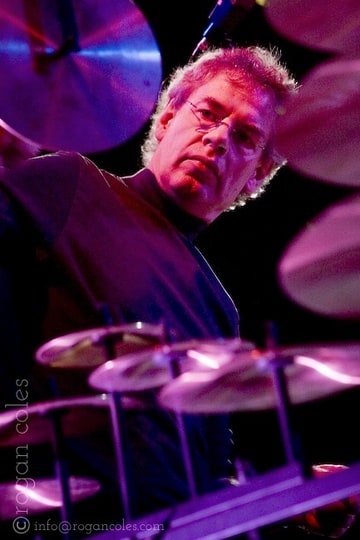 Pan-drums, fistfights, discipline and back close to the edge, Kent's drum wizard Bruford recorded several masterpieces. Carrying a bag of trix and stix in modern rock and certaintly his status of Fusion Master is established. His pan-drumkit it's weird, only Bozzio drumkit is weirdest ! 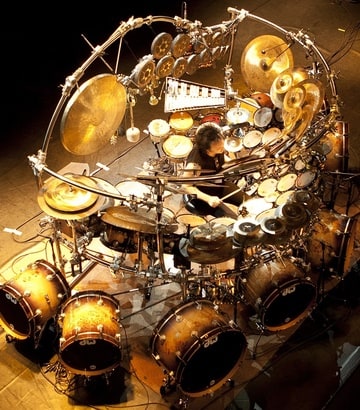 Huge musician and journeyman Bay Area Bozzio carried is huge tecnique to Top 20 in 1983 with "Spring Session M" (it's an anagram), before was the man for Zappa, UK (replacing Bruford), Jeff Beck and later for Debbie Harry, Korn, Fantômas...look at his huge discography.
It took 4 hours to mount his drumkit... 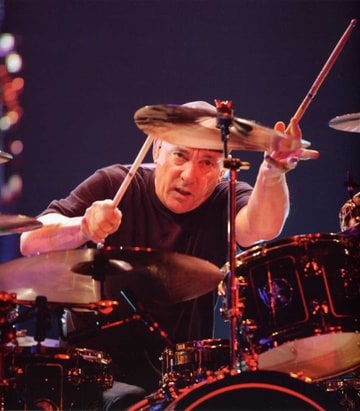 The poet, not the founder, of Rush. His clean and power battering is easy to recognized. Or maybe is the Rush sound. 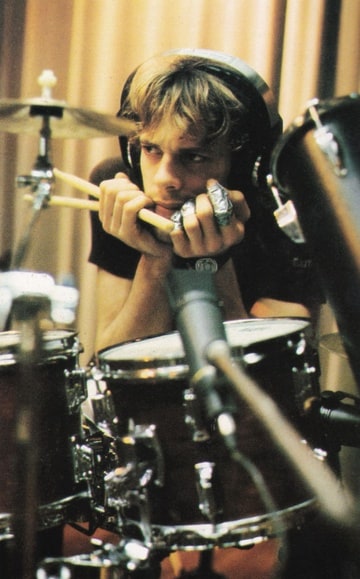 Musician more than a simple rhythm machine, I like Police so much, I hate reggae...Stew plays something different, not Sting ! I like Rumble Fish OST too... 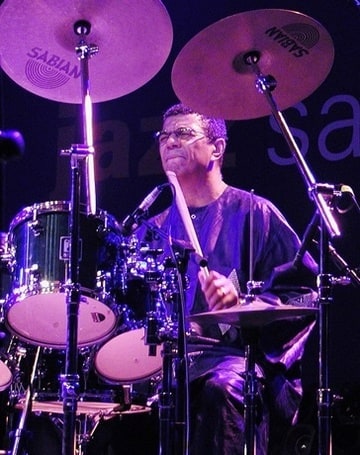 A real innovator, he played with everybody, starter in Jazz Dream Team...
Mass. Patriot's rating: 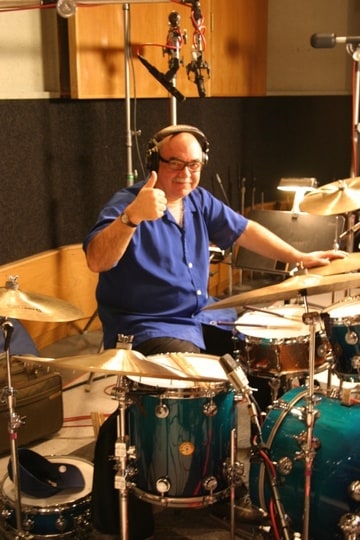 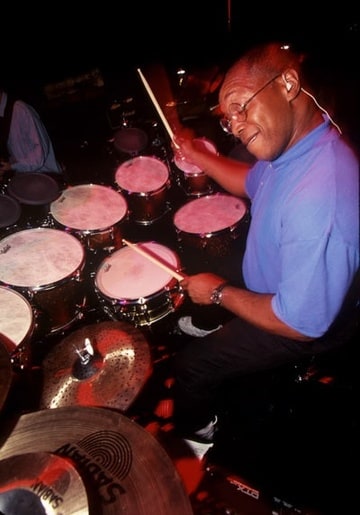 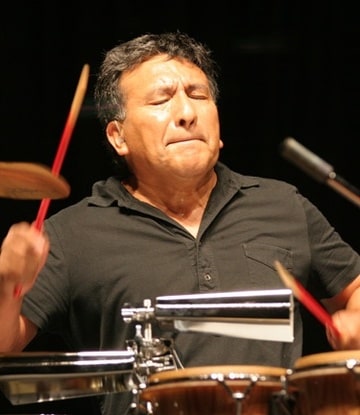 But he's a percussionist !!! Everybody says...so who was behind the drumkit when Joe Zawinul recorded Birdland ?
Is career starts with Mambo King Pérez Prado, now is one the most famous new age artist.
Mass. Patriot's rating: 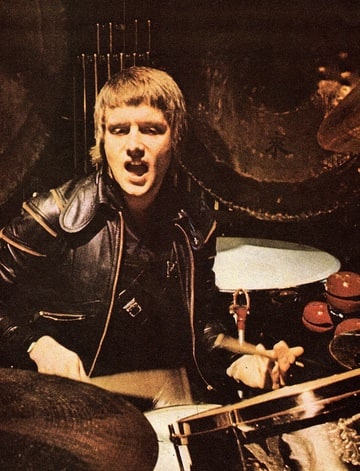 British, B'hamer but not heavy hitter, not a real rock drummer, not fusion, jazz...It's just the P factor, Top 20 both sides of the Atlantic. 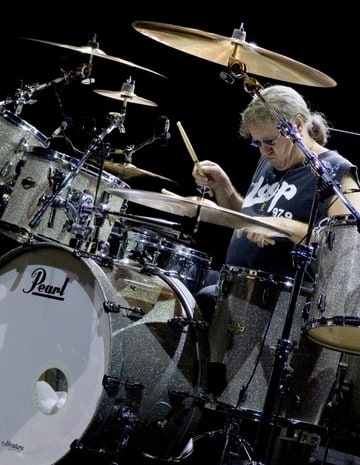 I didn't forget him...I forget his band...what's name...ok I got it : Whitesnake !!! And I really like his job in the Gary Moore band.
Did I miss something ?
Mass. Patriot's rating: 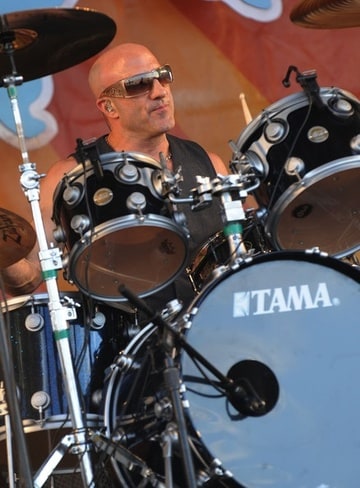 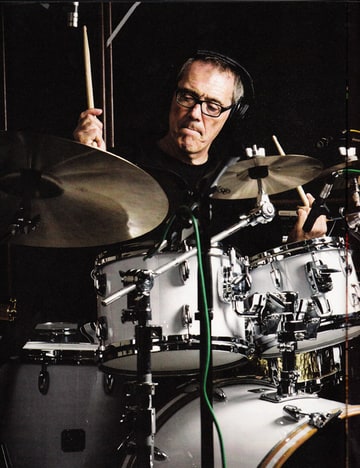 Vinnie machine, he's able to play ANY genre with any styles, talented both stage or studio.
Mass. Patriot's rating: 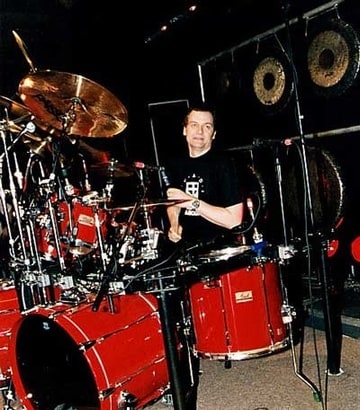 If you named Carl Palmer next must be Colosseum's leader Jon Hiseman, explorer in the Tempest, top drummers in most readers' poll of the 70's.
Mass. Patriot's rating: 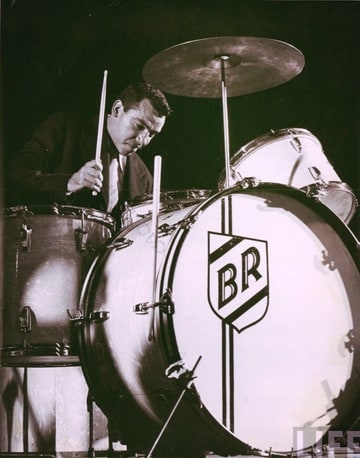 The ICON ! Popular as an actor, Buddy Rich was the most admired drummer in the world for long long time.
Mass. Patriot's rating: 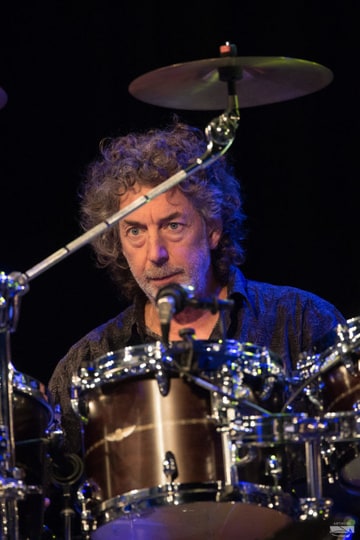 Some of his records are milestones in drumming tech, double bass expecially, how to play the HH and how recording it...anyway I will not choose him for a live band... 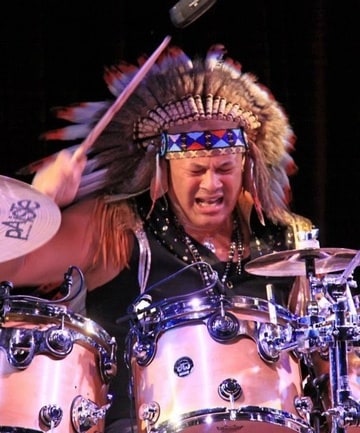 Yes the producer...he replaced Billy Cobham in Mahavishnu Orchestra, recorded Wired with Jeff Beck, joined in the Tommy Bolin Band...addicted to Top 20. Too much works and platinum records to list.
Mass. Patriot's rating: 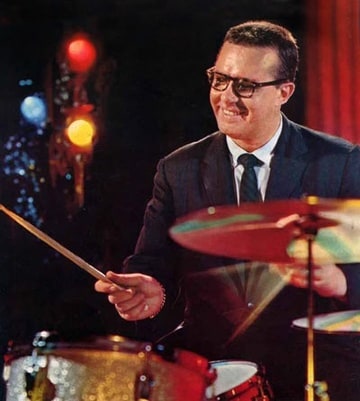 This Mass. born drummer with italian parents with his distinctive sound can be obscure to the masses...but he recorded, and arranged, one the most iconic jazz standard : Take 5
So googling Dave Brubeck Quartet and learn more...
Mass. Patriot's rating: 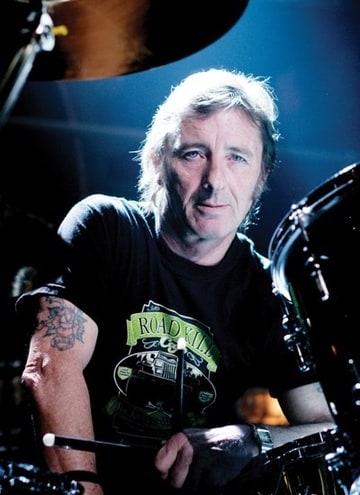 Bassdrum slightlyy forward, snare slightly backward, can be problems if you're a sessions musician, but if you was, back from the start, AC/DC rhythm machine that's a trademark...
Mass. Patriot's rating: 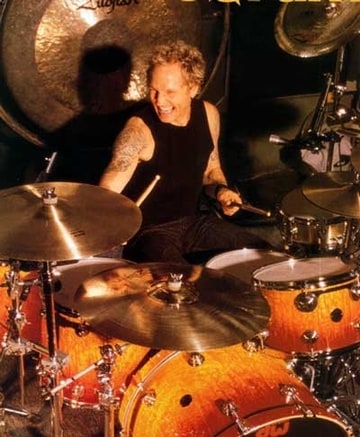 Handsome, tall and elegant this norwegian/american drummer well know for his live works with The Cult, G'nR and Velvet Revolver has the metal touch and some bluesy attitude, Cozy most favorite disciple.
Mass. Patriot's rating: 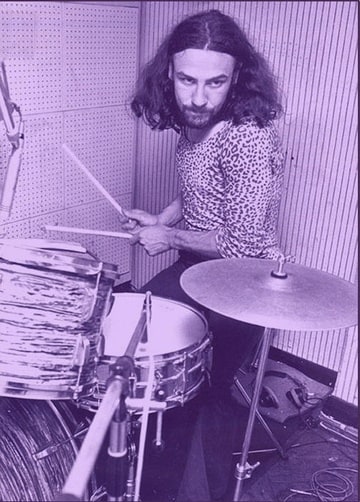 Another Buddy Rich' son, he surprized me with the fast pacing "Neon Knights", his slow'n heavy drumming was so seminal among tons of young drummers.
Mass. Patriot's rating: 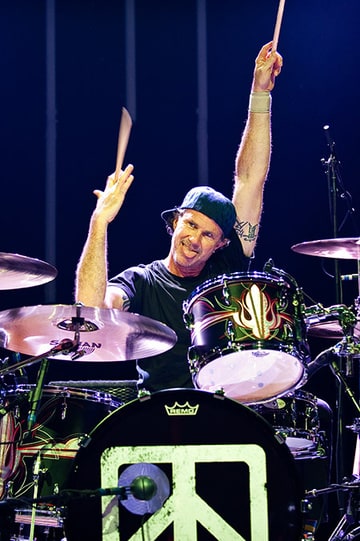 Surely powerful and sensitive, but no way...the other Ferrell sounds better in Chickenfoot !!! 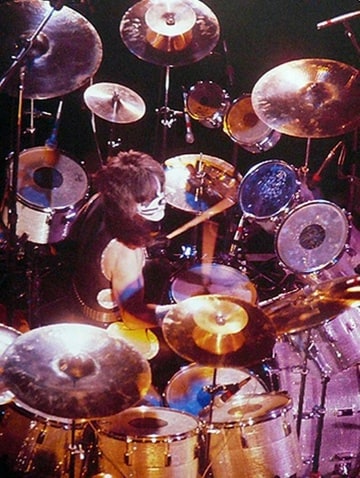 Not bad as Stanley & Simmons depicted him, surely not a rock drummer, but the right drummer in the right place at right time...anyway I can sing his 100.000 Years drum solo right now.
Mass. Patriot's rating:

I don't like drummers, you must play over 'em, they invaded small stages with big 24" bass drums...
And they don't have the VOLUME knob...
This is my list, I'm a musician, I've meet most of them, I live for music, I live with music.

More drummers will be added...

Favorite Images of Beavers by kathy

never mind the bollocks by vixen

Gone with the Wind - The Last Survivor by Kandi

Babies Born in the Movies by Kandi

What do you want from covers by Mass. Patriot

UFO cast and more part I 2017 EDITION by Mass. Patriot

You're wrong, it's a cover by Mass. Patriot

Stop staring @ me ! In Color by Mass. Patriot