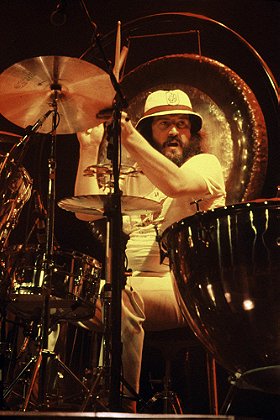 He started playing drums at the age of five using a makeshift kit and later progressed to real drums. His influences included great American jazz drummers such as Gene Krupa and Buddy Rich. He played in a series of bands and formed an association with Robert Plant through Band of Joy, who combined blues, psychedelics and extended musical workouts. According to Plant: "Bonzo was totally and absolutely devoted to getting it right. Everything that he listened to he could go beyond, not only could he recreate it but he could take it somewhere new. He knew that he was a powerhouse among drummers... we seemed to have a great affinity for each other."

Although Bonham and Plant went their separate ways after Band of Joy, they reunited in The Yardbirds, which already featured Jimmy Page. John Paul Jones joined and this led to the formation of Led Zeppelin, who released their first album in 1969. They went on to become the biggest rock band of the 1970s, achieving extraordinary success in the United States in particular.

Bonham died aged 32 in 1980. He had a reputation as a heavy drinker and had consumed too much vodka in the 24 hours before his death, which caused vomiting and asphyxiation. The coroner returned a verdict of accidental death. Led Zeppelin announced they were finished as a band. According to Page, the band could not have continued without him, he was so integral to their sound. They didn't play again as Led Zeppelin until Live Aid (1985), which included Plant's solo drummer Phil Collins and The Power Station's Tony Thompson replacing him in a performance which has been disowned by the band. Bonham's son, Jason Bonham, has become a successful drummer himself and a member of Led Zeppelin for subsequent reunion performances. ... (more) (less)
Tags: British (3), Drummer (3), Led Zeppelin (2), Born 1948 (2), Rock (2), Musician (1), Male (1), Alcoholic (1), Great (1), Deceased (1), Pop (1), 06 (1), Beard (1), Asphyxiation (1), UK (1), Died 1980 (1), Died Aged 32 (1)
My tags:

5. Message to Love: The Isle of Wight Festival (1996)
View all John Bonham movies

Agent Kermit D. Fonz added this to a list 10 months, 3 weeks ago

Georgini voted for 17 images [View All] 2 years ago

Mass. Patriot voted for an image 2 years, 4 months ago

lovedriver voted for an image 2 years, 11 months ago

Eric Apple added this to Rated list 3 years, 2 months ago

lovedriver voted for an image 3 years, 5 months ago

tiger_lola_gen_fan added this to a list 4 years, 10 months ago
English People (24 person items)

tiger_lola_gen_fan added this to a list 4 years, 10 months ago
Drummer (6 music items)

patvyn added this to a list 5 years, 2 months ago
my favorite drummers (10 music items)

Director Black added this to list 5 years, 11 months ago