0
Radiohead
Why I respect them: Radiohead have always followed their own musical vision wherever it's taken them. This has earned them legions of fans and given inspiration to many other bands/artists. They're also innovative in a business sense, as they were one of the first major bands to offer their albums via download before you could buy them. Add to this that they're environmentally conscious...

We're not sure if there's any information made public about the efforts
Radiohead go to to reduce their environmental impact.
But, there should be.
At the outset we were all given tour water flasks.
Plastic anything is like contraband.
Every bus and truck runs on bio-fuel.
There is no idling, rather some new-fangled way to deliver electricity cleanly.
They don't do air-freight either.
The list goes on..
Everything is supremely managed to reduce the 'footprint'
and it's inspiring in that its 'real' and should set the standard for other big productions.
This all goes beyond the immediate impact of simply
being able to watch these 5 guys perform together each night.
Unlike any band we've seen they all contribute such an immense amount to the outcome.
Their extreme individual talents blending so naturally.
To witness this first-hand is an education in musicianship and vision
that's certainly not been lost on us..
For now, we'd like to send our huge thanks to the Radiohead crew
for being so super crazy nice and supportive to us.
--from Liars' MySpace blog

Oh yeah, and the fact that many bands/artists I DO like are fans of theirs (Liars, NIN, Deftones, Tool, A Perfect Circle, etc.) has helped persuade me to respect them even if I can't get into them.

Why I don't like them: Aside from their song "Creep" (which I've long said that if you can't relate to then I question your humanity), I've never heard a song that's stuck with or impressed me. This is partly due to my dislike of Thom Yorke's voice, which I can only tolerate for about 2.5 songs before I have an overwhelming urge to listen to something else. I've tried various ways of approaching their music, but his voice keeps turning me away. Also, a lot of their musical output has a tendency to make me sleepy, which also prevents me from figuring out why so many people insist they're so damn brilliant.
the giraffe's rating:

0
The Smiths
Why I respect them: They've influenced countless bands that I like, and without them many of those bands probably wouldn't sound the way they do. Among said bands are: Deftones, Placebo, Snake River Conspiracy, Thursday, Poison the Well, and Pretty Girls Make Graves. Also, while I dislike their music when they perform it, I tend to like it more when bands I like cover them (see Deftones' cover of "Please Please Please Let Me Get What I Want" and SRC's cover of "How Soon Is Now?"), though not always (see Placebo's cover of "Bigmouth Strikes Again" which is a terrible song IMO).

Why I don't like them: Back in the early '90s I read an interview with Morrissey in some magazine (Spin perhaps) and his personality really killed my interest in his music, solo or otherwise. By the time I finally heard The Smiths they failed to impress me and I couldn't stand Morrissey's voice. Still can't.
the giraffe's rating:

0
Depeche Mode
Why I respect them: Again here it boils down to their influence on other bands that I like, plus the fact that when other bands cover their songs I like them better than the originals (see at least half the songs on the Music for the Masses tribute album).

Why I don't like them: When I've heard their songs I've either hated them or been indifferent to them (unless covered by other bands as previously stated). Also, I saw them perform live once & Dave Gahan came off as a very full-of-himself jerk who thinks he's god's gift to the world. Meh.
the giraffe's rating:

0
Rush
Why I respect them: Rush have always sounded like Rush and always will. The fact that they've survived as long as they have without compromising their sound helps me respect them. Also Les Claypool is a huge fan of theirs, and since I respect him as a musician I respect his influences too.

Why I don't like them: Geddy Lee's voice irritates the living hell out of me.
the giraffe's rating:

0
The Who
Why I respect them: Do I really need to explain?

Why I don't like them: Musically they bore me for the most part. Some of their songs have interesting moments & are therefore somewhat memorable, but I've never thought "Wow, this is a Great song!" whenever I've heard them. Usually it's more like "well, that part was interesting, but now it's done with and I'm kinda bored and I wonder what else I could be listening to?"
the giraffe's rating:

0
Eric Clapton
Why I respect him: Mostly for his work in Cream.

Why I don't like him: His solo work (if not all his post-Cream output) has been mediocre in my opinion.
the giraffe's rating:

Why I don't like them: I've seen them live a handful of times and have been bored out of my mind (once I even took a nap during their set). All their songs sound the same to me, unlike their contemporaries Anthrax, Metallica, and Megadeth (all of whom I've been a fan of at some point).
the giraffe's rating:

0
The Velvet Underground
Why I respect them: Influenced too many bands I like (and many I don't like) to name, plus Lou Reed is mostly awesome.

Why I don't like them: The older I get I'm finding myself bored by the majority of their songs. Sure their music is original enough, but the songs tend to meander aimlessly and cease to be interesting long before they've ended. I still like a small number of their songs, but trying to get through their albums is too unpleasant to attempt anymore.
the giraffe's rating:

0
Paul McCartney
Why I respect him: The Beatles

Why I don't like him: I can't think of a single song he's released since The Beatles broke up that I like.
the giraffe's rating:

0
U2
Why I respect them: Influenced other bands I like, taken bands I like on tour, and they've recorded some decent songs over their career.

Why I don't like them: Bono annoys the hell out of me and their output since Achtung Baby has been a mixture of mediocrity, terribleness, and songs that sound forced.
the giraffe's rating:

0
New Order
Why I respect them: Bernard Sumner, Peter Hook & Stephen Morris were in Joy Division.

Why I don't like them: Their music has only proved to me that Ian Curtis's death was an even greater tragedy than it seemed at the time...to give up their sound made sense but embracing dance music guaranteed they'd suck forever.
the giraffe's rating:

0
Iron Maiden
Why I respect them: Influential on other heavy metal bands, plus Eddie: 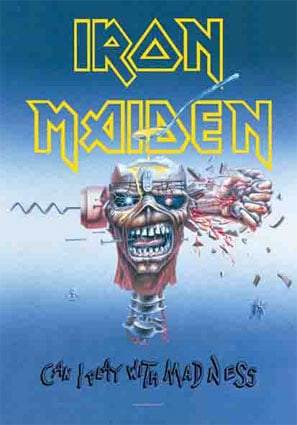 Why I don't like them: Their music has always seemed silly to me, and not in a good way. Never been able to get into it.
the giraffe's rating:

0
The Melvins
Why I respect them: The Melvins have always done their own thing, remaining an underground institution since 1983. They've influenced many bands I like including Tool, Nirvana, and Mastodon.

Why I don't like them: I was initially turned off of the Melvins during a live performance when they opened for White Zombie in 1995. During the course of their 30 minute set they seemed to play only 2 or 3 songs, which may be the case as the only indication a song had ended was them stopping briefly (though for all I know they may have played several songs without stopping between them). It was irritating and bored me...the songs seemed to go nowhere and subsequent songs didn't differ much from the one(s) before. Also, I noticed singer/guitarist King Buzzo pointing at people in the crowd during their set (mostly crowd-surfers), each of which were thrown out for no apparent reason by security. Not cool.
the giraffe's rating:

0
Modest Mouse
Why I respect them: They've recorded a few songs I like, and their '90s output was influential on the direction indie-rock headed.

Why I don't like them: I saw them perform live once and was so bored I wound up walking out on them a few songs into their set. Also their output since The Moon and Antarctica has mostly bored me.
the giraffe's rating:

If you enjoyed this list, please check out my other music lists

The Heartland: A Movie Marathon
32 item list by amaryllis
1 votes

Directors with Beards by talia_sparkle

30 days of music by the giraffe

Bands/artists I quit caring about by the giraffe

Help me lower my IQ this summer by the giraffe

Best albums of 2000 by the giraffe