Actors Who Have Played Robin Hood

Robin Hood is a 1912 silent film made by Eclair Studios when it and many other early film studios in America's first motion picture industry were based in Fort Lee, New Jersey at the beginning of the 20th century. 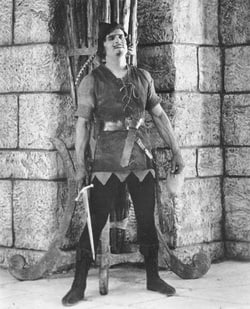 Robin Hood, starring Douglas Fairbanks and Wallace Beery, is the first motion picture ever to have a Hollywood premiere, held at Grauman's Egyptian Theatre on October 18, 1922. The movie's full title, under which it was copyrighted, is Douglas Fairbanks in Robin Hood. It was one of the most expensive films of the 1920s, with a budget estimated at approximately one million dollars and generally received favorable reviews. 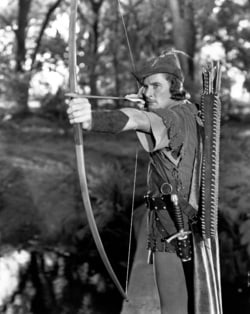 The Adventures of Robin Hood is a 1938 American swashbuckler film directed by Michael Curtiz and William Keighley, and starring Errol Flynn, Olivia de Havilland, Basil Rathbone, and Claude Rains. Written by Norman Reilly Raine and Seton I. Miller, the film is about a Saxon lord who, in King Richard's absence, fights back as the outlaw leader of a rebel guerrilla army against Prince John and the Norman Lords who are oppressing the Saxon people. The Adventures of Robin Hood was filmed in Technicolor. 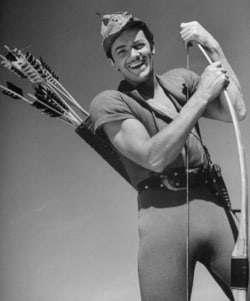 The Bandit of Sherwood Forest is a 1946 film about the son of Robin Hood. The sets built for the film were reused in the Three Stooges shorts Squareheads of the Round Table, Fiddlers Three, and The Hot Scots, and again for the 1948 film The Prince of Thieves. 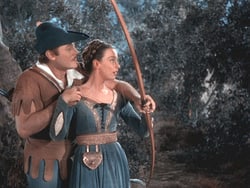 The Prince of Thieves is a 1948 film nominally inspired by Alexandre Dumas' 1872 novel Le Prince des voleurs. Produced by Sam Katzman for Columbia Pictures and starring Jon Hall as Robin Hood with stuntwork by Jock Mahoney, the film was shot in the Cinecolor process that features an inability to reproduce the colour green. Sequences were shot reusing several of the sets of Columbia's The Bandit of Sherwood Forest and at Corriganville. 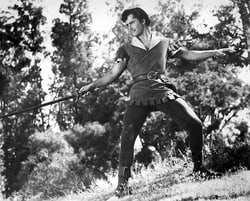 Rogues of Sherwood Forest is a 1950 Technicolor Columbia Pictures film directed by Gordon Douglas and featuring John Derek as Robin the Earl of Huntingdon, the son of Robin Hood, Diana Lynn as Lady Marianne, and Alan Hale, Sr. in his third movie as Little John over a 28-year span; he'd played the part opposite Douglas Fairbanks in 1922 and Errol Flynn in 1938, possibly the longest period over which any film actor played the same major role. It was also Hale's final film. The film was written by Ralph Gilbert Bettison and George Bruce. 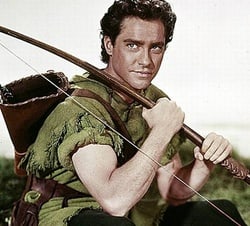 The Story of Robin Hood and His Merrie Men is a 1952 live action Disney version of the Robin Hood legend made in Technicolor and filmed in Buckinghamshire, England. It was written by Lawrence Edward Watkin and directed by Ken Annakin. This is the second of Disney's complete live-action films, after Treasure Island (1950). 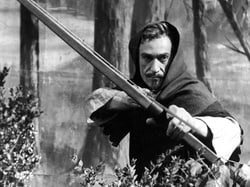 Robin Hood was produced in 1953 by the BBC, during which time these episodes were transmitted live and then re-acted the following Saturday or Sunday in order for a repeat to be shown. However, in some cases, television programmes were recorded onto 16mm film; the age and technology used in order to film titles such as Robin Hood mean that they no longer survive in their original quality, which means that transmission of these episodes by today's standards would be deemed as 'unacceptable'. However, short clips of this serial have aired as recently as 2007 as part of a documentary presented by Jonathan Ross, covering Robin Hood from its beginnings to the more recent BBC production (2006), and shown as an example of television production in the BBC series of documentaries entitled Children's T.V. On Trial The 1950s.

The show lasted only for one season, and starred Patrick Troughton as Robin Hood. 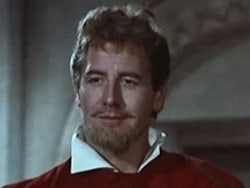 The Men of Sherwood Forest is a 1954 British adventure film directed by Val Guest and starring Don Taylor, Reginald Beckwith, Eileen Moore and David King-Wood. The film follows the exploits of Robin Hood and his followers. Doreen Carwithen wrote the score for the film. 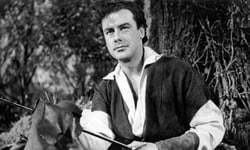 The Adventures of Robin Hood is a British television series comprising 143 half-hour, black and white episodes broadcast weekly between 1955 and 1959 on ITV. It stars Richard Greene as the outlaw Robin Hood and Alan Wheatley as his nemesis, the Sheriff of Nottingham. The show followed the legendary character Robin Hood and his band of merry men in Sherwood Forest and the surrounding vicinity. While some episodes dramatised the traditional Robin Hood tales, most episodes were original dramas created by the show's writers and producers. 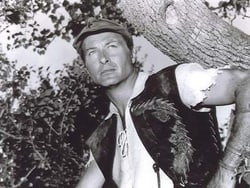 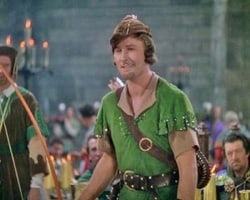 Robin and the 7 Hoods is a 1964 American musical film directed by Gordon Douglas and starring Frank Sinatra, Dean Martin, Sammy Davis, Jr. and Bing Crosby. The picture features Peter Falk, Barbara Rush, and Edward G. Robinson in an un-credited cameo. Written by David R. Schwartz, the film transplants the Robin Hood legend to a 1930s Chicago gangster setting. Produced by Frank Sinatra, the film introduced the hit song "My Kind of Town" by Jimmy Van Heusen and Sammy Cahn, which was nominated for an Academy Award for Best Original Song and achieved a career of its own independent of the film. 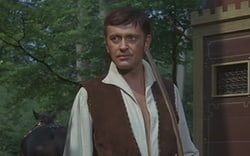 A Challenge for Robin Hood is a 1967 British adventure film directed by C.M. Pennington-Richards and starring Barrie Ingham, Peter Blythe and John Arnatt 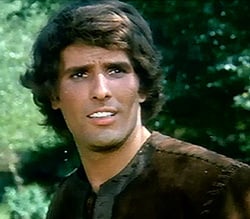 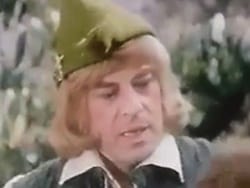 Up the Chastity Belt (also released as Naughty Knights in the USA) is a 1971 British film, a spin-off from the TV series Up Pompeii! that starred Frankie Howerd and was directed by Bob Kellett. 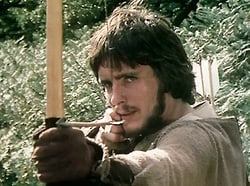 The Legend of Robin Hood was a 1975 BBC television serial that told the story of the life of Robin Hood.
The serial was broadcast in the Sunday teatime slot and contained a surprising amount of realistic violence including a scene where the disabled Ralph Gammon and adolescent Much are hanged by a misled lynch mob. 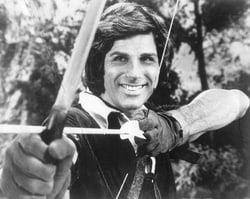 When Things Were Rotten is an American situation comedy television series created in 1975 by Mel Brooks and aired for half a season by ABC.

A parody of the Robin Hood legend, the series starred Richard Gautier (who earlier had played Hymie the Robot in Brooks' Get Smart series) as Robin Hood. Also in the regular cast were Dick Van Patten as Friar Tuck, Bernie Kopell (another Get Smart veteran) as Alan-a-Dale, Henry Polic II as the Sheriff of Nottingham (whose name was Hubert), Ron Rifkin as Prince John, Misty Rowe as Maid Marian, and David Sabin as Little John. Richard Dimitri played a dual role as identical twin brothers; Renaldo was one of the Merry Men, while Bertram was the Sheriff's right-hand man. 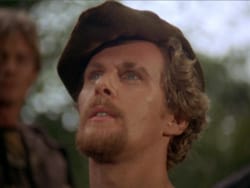 Ivanhoe is a 1982 television film adaptation of Sir Walter Scott's novel of the same name. The film was directed by Douglas Camfield, with a screenplay written by John Gay. The film depicts the noble knight Ivanhoe returning home from The Holy Wars and finds himself being involved in a power-struggle for the throne of England 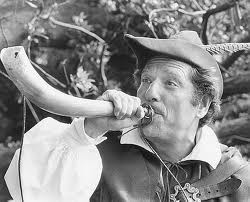 Robin Hood: Prince of Thieves is a 1991 American adventure film directed by Kevin Reynolds. The film stars Kevin Costner as Robin Hood, Morgan Freeman as Azeem, Christian Slater as Will Scarlet, Mary Elizabeth Mastrantonio as Maid Marian of Dubois, and Alan Rickman as the Sheriff of Nottingham.

The movie was a major box office hit, making over $390 million worldwide, which made it the third highest grossing film of 1991. Rickman received the BAFTA Award for Best Actor in a Supporting Role, while the film's theme song, "(Everything I Do) I Do It for You", by Bryan Adams, was nominated for the Academy Award for Best Song.
EarlySparker's rating:

Robin Hood: Men in Tights is a 1993 French-American musical adventure comedy film and a parody of the Robin Hood story. Produced and directed by Mel Brooks, the film stars Cary Elwes, Richard Lewis, and Dave Chappelle in his film debut. The film includes frequent comedic references to previous Robin Hood films (particularly Robin Hood: Prince of Thieves, upon which the plot is loosely structured, Disney's Robin Hood, and The Adventures of Robin Hood). 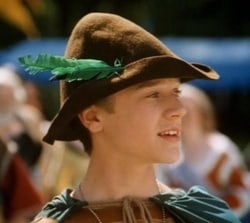 Robin of Locksley is a 1996 television movie directed by Michael Kennedy. It stars Devon Sawa, Joshua Jackson and Sarah Chalke 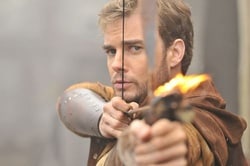 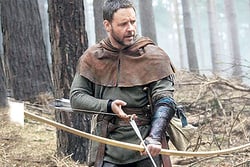 Robin Hood is a 2010 British-American epic adventure film based on the Robin Hood legend, directed by Ridley Scott and starring Russell Crowe and Cate Blanchett. It was released in 12 countries on 12 May 2010, including the United Kingdom and Republic of Ireland, and was also the opening film at the 2010 Cannes Film Festival the same day. It was released in a further 23 countries the following day, among them Australia, and an additional 17 countries on 14 May 2010, among them the United States and Canada