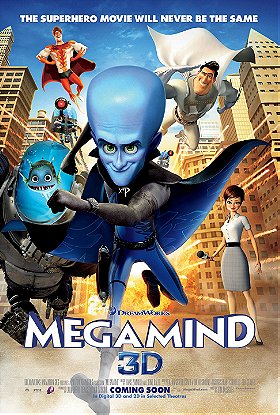 147 votes
Most Successful Movies of... All Time (500 items)
list by SchwarzerAbt
Published 15 years, 2 months ago

Not a classic, but fun and entertaining enough

PvtCaboose91
3 votes
"All men must choose between two paths. Good is the path of honour, heroism, and nobility. Evil... well, it's just cooler."

A late-2010 picture delivered by the DreamWorks animation factory, Megamind can best be described as Pixar's The Incredibles meets Despicable Me. See, Megamind is a clever dissection of superhero movie conventions which functions as a character study of the sup... read more

johanlefourbe
3 votes
Back in 2010, Illumination Entertainment made their debut with ‘Despicable Me’, it turned out to be a big success at the box-office but nobody expected it to become such a huge franchise. In fact, back in 2010, DreamWorks, probably the least original animation studio in the world, tried to release their own animated feature focusing on a bad guy as well but it was considered a flop, even if i... read more

filmbuilder
3 votes
It is fairly entertaining but 'Megamind' seems like 'Despicable Me' to me! A villain has machines and murder weapons and then becomes a good guy - 'Despicable Me'. Despite its lack of originality, it has great animation and decent voice acting and is still something kids will like but it will mean more to kids than grown-ups and if you're a grown-up, probably better you watch a Pixar movie instead... read more
View all Megamind reviews

“As far as Dreamworks movies go, I do prefer Prince of Egypt, Shrek and How to Train Your Dragon, but Megamind is one of the studio's better movies. While the film loses its way in the story just towards the end, and slackens in the pace a tad at that point, it is still smart and very entertaining. In general, the pace is fast and furious, while the story is original and exciting. I also enjoyed the voice acting, I don't care for Will Ferell but still thought he was brilliant as the zany and very lovable titular character, while Brad Pitt also entertains and Tina Fey is suitably sassy. The characters all add a lot to the movie, Megamind for me is one of the better title characters in a Dreamworks film.

The film is also hilarious, the dialogue is funny and smart and the sight gags ” read more

moviebuff added this to a list 5 months, 1 week ago
101 Family Movies You Must See Before You Die (101 movies items)

MisterMA5 added this to a list 10 months, 2 weeks ago
Películas animadas (111 movies items)

PulpRoman voted for 2 images 1 year ago

flamel05 added this to a list 1 year, 1 month ago
Películas Vistas (220 movies items)

PulpRoman added this to a list 1 year, 1 month ago

Monstermaster added this to a list 1 year, 10 months ago
Underappreciated Movies. (28 movies items)

Meta_Ridley voted for an image 2 years, 5 months ago

the giraffe voted for an image 2 years, 9 months ago

the giraffe added this to a list 2 years, 9 months ago

"First viewing - July 27th I'm a little disappointed in myself for not watching Megamind sooner, but I'm glad I finally gave it a look. The kiddo and I watched it together and I had a lot of fun with it. I love the premise, even if it does share some common ideas with Despicable Me, and the characters are delightful. I'll gladly watch this one again."

CoolNameGuy91 added this to a list 2 years, 10 months ago
Marvelous Movies (58 movies items)

Unique added this to a list 3 years, 4 months ago
Favorite Movies (1233 movies items)

Ryan Serowinski added this to a list 3 years, 4 months ago

muh added this to a list 3 years, 5 months ago