My most anticipated films of 2012

8.5
Django Unchained (2012)
If Quentin Tarantino makes a movie, I will see it ASAP after it opens. He's been my favorite director and screenwriter since 1994, so yeah, this one tops my list.
the giraffe's rating:

6.3
Wrong (2012)
Quentin Dupieux (currently my 2nd favorite Quentin) scored big points with me last year with Rubber, a film that currently remains my favorite from 2011 (especially since it's the most original film I saw). That alone has me ready to watch another film from him, and the trailer has me very intrigued...

7
Prometheus (2012)
Ridley Scott prequel to Alien. Hell yes I'm excited, and every new trailer or viral video only amps up my excitement.

Trailer for Prometheus
the giraffe's rating:

Trailer 2 for The Dark Knight Rises
the giraffe's rating:

5.7
Gambit (2012)
The script was written by the Coens, and since I love their writing as much as their direction I'm very curious about Gambit. Plus it looks like the next Coens film may not drop until 2013, so I'll settle for this one in the meantime.
the giraffe's rating:

7
ParaNorman (2012)
An animated film with zombies? I've gotta see this!

Trailer for ParaNorman
the giraffe's rating:

Trailer for The Pirates! Band of Misfits
the giraffe's rating:

7.1
Brave (2012)
After 2 years in a row of sequels, only one of which proved to be necessary, Pixar returns to an original idea. Aside from Cars 2 I haven't missed a Pixar film yet, so I'll watch this one as well.

Teaser for Brave
the giraffe's rating:

6.2
The Five-Year Engagement (2012)
Jason Segel has quickly become one of my favorite writers & comedic actors, so my interest here should need no further explanation. Oh yeah, and the trailer looks excellent:

Trailer for The Five-Year Engagement
the giraffe's rating:

6.8
Bernie (2012)
I like more of Linklater's films than I don't, and the trailer for this one looks pretty good. I'll most likely see it.

Trailer for Bernie at Listal
the giraffe's rating:

6.5
Jeff, Who Lives at Home (2012)
Jason Segel again (see above) starring in a movie from the guys behind Cyrus (which I mostly dug, moreso than most people seemed to).

7.2
God Bless America (2012)
World's Greatest Dad was one of my favorite films of 2009, and I've been a fan of Bobcat's since the late 80s. Judging by the trailer, this one may be one of my favorites this year.

5.9
Abraham Lincoln: Vampire Hunter (2012)
The other Lincoln movie that comes out this year. Not sure how historically accurate this one is though. ;) Been meaning to read the book & odds are I'll likely check out the film adaptation before getting around to it so I'm more likely to enjoy it.
the giraffe's rating:

7
World War Z (2013)
Loved the book. And now that I'm hearing that this is planned to be the first of 3 films adapted from the source material, I'm even more excited since one film wouldn't be adequate to capture the book honorably. I think a cable series would be the best way (preferably from Showtime or HBO) to adapt it, but this will do for now.
the giraffe's rating:

7.3
Lawless (2012)
Still need to watch The Proposition, but I enjoyed John Hillcoat's adaptation of The Road so I'm curious about this one. Add to that Tom Hardy, Gary Oldman, and Guy Pearce in the cast & the screenplay written by Nick Cave & I'm pretty much sold. Only thing that gives me pause? Shia LeBeouf is in it & I'm not a fan of his. Hopefully he won't get too much screen time. ;)
the giraffe's rating:

5.6
Wanderlust (2012)
As a die-hard fan of the former members of MTV's The State, seeing that this one is written & directed by David Wain, and co-written with Ken Marino...that gets me excited. And the last film David Wain directed was Role Models, which was a pleasant surprise. So hopefully this one will be at least as good as that one. I can't tell for sure from the trailer, but it doesn't look bad in any way to me.

Trailer for Wanderlust
the giraffe's rating:

Trailer for Chronicle
the giraffe's rating:

7.2
The Best Exotic Marigold Hotel (2012)
Not my usual type of movie perhaps, but the trailer entertained me. Odds are I won't rush out to see this one, but I'll catch it after it goes to DVD.

Trailer 2 for The Best Exotic Marigold Hotel
the giraffe's rating:

6.9
The Amazing Spider-Man (2012)
This one falls here simply because I'm not yet convinced that Andrew Garfield will make a good Peter Parker/Spider-Man. Plus I think it's a little stupid to be rebooting this series already, even though I wasn't impressed with Raimi's films overall. However I like what I see in the trailer, so I may end up checking this out.

Teaser for The Amazing Spider-Man
the giraffe's rating:

8
The Avengers (2012)
At this point I feel like I have to watch The Avengers, regardless of the fact I hate Joss Whedon (yeah, bite me). The film could prove to be a train wreck, especially considering it's come together rather quickly, but even that could prove to be worth a look if all this build-up proves to be for mediocre results.

Trailer for The Avengers
the giraffe's rating:

6.2
Dark Shadows (2012)
At this point I'm sick of Johnny Depp starring in every Tim Burton movie that comes out, so I'm really not that excited about this one. Plus, while I still enjoy all of Burton's films to some degree his more recent output hasn't come anywhere near the greatness of his 80s work (or even his 90s work for that matter). Maybe I need to revisit the TV series it's adapted from & see if it improves my expectations here.

6.9
Frankenweenie (2012)
Is this really necessary? I dig Burton's original short film, but I've never felt like it needed to be expanded on. Perhaps a trailer will change my mind.

On the other hand... 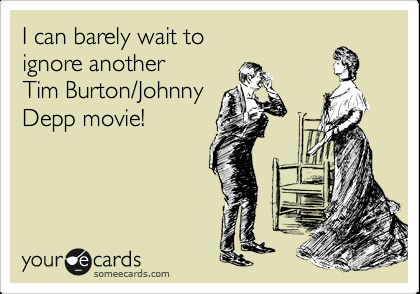 6.4
The Dictator (2012)
Borat was comedic brilliance. Bruno was basically a rehash of that film, still entertaining but nowhere near as excellent. The trailer for this one doesn't look very good honestly (not pleased that Megan Fox is involved either), but I'll likely see it anyway in hopes they're saving the best bits for those who watch the movie.

Trailer for The Dictator

6.4
The Lorax (2012)
It's The Lorax, and it comes from the same animation studio that did Despicable Me (which I loved). However it appears that it won't be very faithful to the source material, which is disappointing to me. Still, it could be worth a look.

Trailer for Dr. Seuss' The Lorax
the giraffe's rating:

7.8
Skyfall (2012)
Ah yes, the latest Bond movie. This one falls into this section due to my feelings after the last two Bond films. While I thoroughly enjoyed Casino Royale, I mostly hated Quantum of Solace. So I definitely won't be rushing off to catch this one, and will wait until I get some feedback on it to decide for sure whether I'll watch it at all.


Thanks to vnnlng for mentioning it so that I realized I should give it a spot here.
the giraffe's rating:

Related lists:
Count Me In (highly anticipated films - Xanadon't)
Looking Forward to in 2012... by PvtCaboose91
Most Anticipated Films of 2012! by jay-jay
...and so on

8 Summer 2011 Movies That Shouldn't Get Sequels by quisma88

Films I've seen in 2012 by SwornShadow

the giraffe's favorite "zombie" movies by the giraffe

October 2012 Horrorfest by the giraffe

My favorite Horror movies - 90s by the giraffe