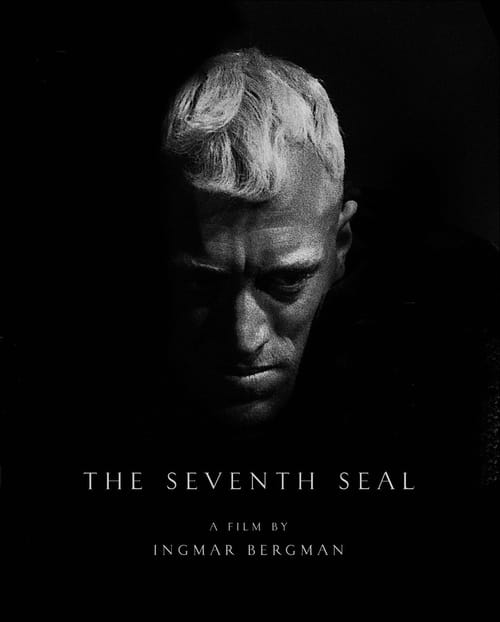 Few infectious movies have dared face Death itself like "The Seventh Seal." This masterpiece by director Ingmar Bergman tells of a Swedish knight who returns from the Crusades and finds himself face to face with the grim reaper, personified as a pale hooded man. The knight challenges Death to a chess game to play for time, while he confronts existential questions in the time of the Black Death and tries to save a few unmarked souls. It's a movie more notable for metaphorical beauty than historical accuracy concerning either the bubonic plague or medieval Europe, but it captures the human struggle to make sense of dark times, such as during epidemics.
PulpRoman's rating: 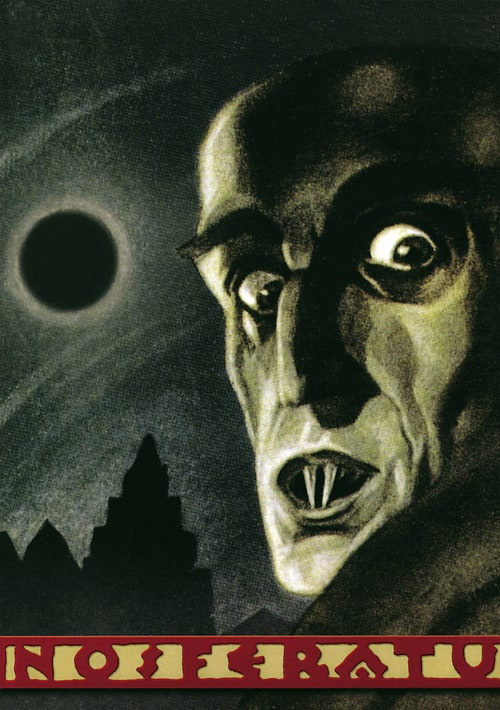 Infection themes run rampant in modern-day vampire movies such as "Blade" and "Underworld," but one classic silent film paired a vampire legend with the real plague known as the Black Death. The sinister Count Orlok of "Nosferatu" cloaks his vampire feeding through the spread of bubonic plague, a bacterial-caused disease which ravaged Europe and Asia repeatedly throughout history. Famous movie scenes include the plague arriving on Orlok's coffin-laden boat, with rats running ashore and spreading their deadly cargo of microbes. This has eerie historical parallels — gravediggers in 16th century Venice actually made a similar connection between supposed vampires and the Black Death, without having modern medicine's knowledge of the plague.
PulpRoman's rating: 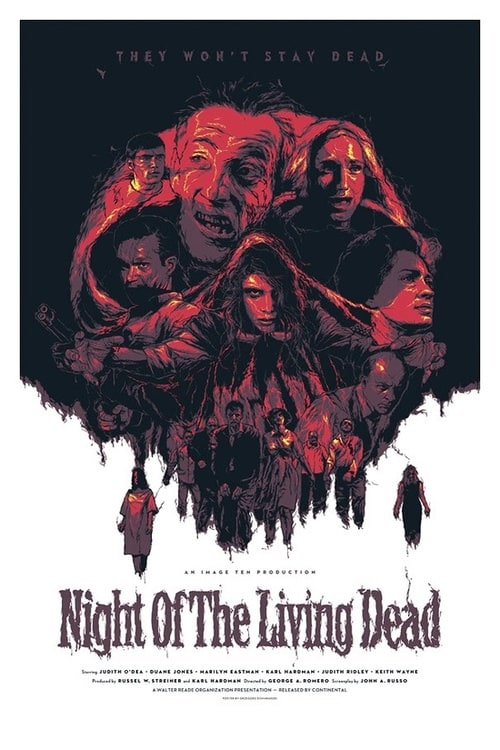 When unexpected radiation raises the dead, a microcosm of Average America has to battle flesh-eating zombies.
PulpRoman's rating: 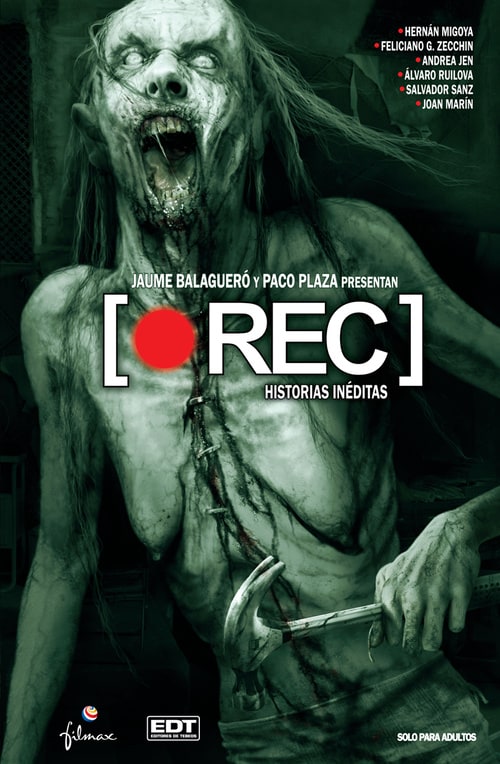 The disease in REC is a strange one. Unlike its American counterpart Quarantine, the disease is not a rabies-type illness. As we get to the end of REC , we discover that its origins lie with an agent of the Vatican who was responsible for investigating a virus that causes demonic possession.The effects of the disease are grizzly. It turns people into raving homicidal maniacs who attack the living, biting them and infecting them in turn. The action is set in an apartment block where a family dog contracted the disease and spreads it to its owner, a little girl called Jennifer. The disease runs rampant among the inhabitants of the block and it is hard to survive it as the infected are so extraordinarily aggressive.The whole thing is being filmed by a TV reporter and a cameraman. The building has been sealed off and as the last survivors they have nowhere to flee except for a possible route out of the roof. They end up in the penthouse where the Vatican agent carried out his research and there they find his test subject – Tristana Medeiros. He couldn’t manufacture a vaccine so he left Tristana free to roam the penthouse. She kills the reporter and cameraman.I quite enjoyed REC. It is basically a zombie movie in a claustrophobic setting with a first person shaky camera point of view and a lot of screaming. However the film is entertaining in its creepiness and scare factor. What really caught my imagination was the quarantining of the whole building and the desperation of the survivors to escape. I think it would be a horrible situation where you are effectively condemned to die in a terrible fashion. I could really feel the panic and desperation of the uninfected. 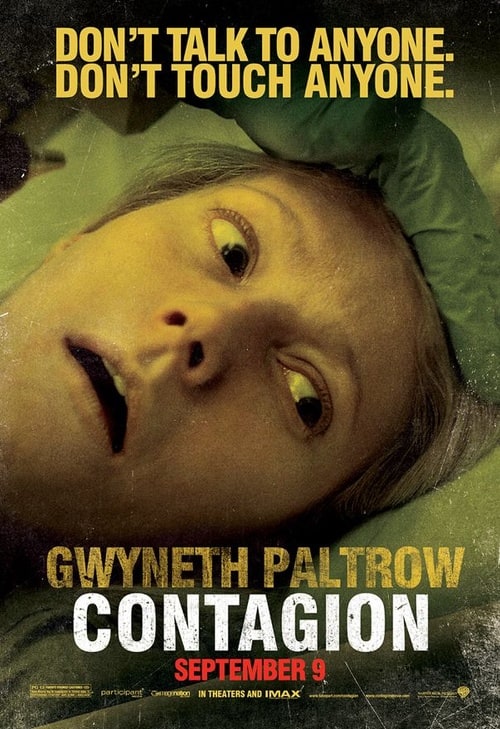 Contagion follows the rapid progress of a lethal airborne virus that kills within days. As the fast-moving pandemic grows, the worldwide medical community races to find a cure and control the panic that spreads faster than the virus itself. As the virus spreads around the world, ordinary people struggle to survive in a society coming apart. It's a movie — but the movies' creators seem to have talked to people who actually deal with viruses and epidemics. The masses' reaction to the epidemic rings true, and the science behind it is sound, harking back to the days of SARS.
PulpRoman's rating: 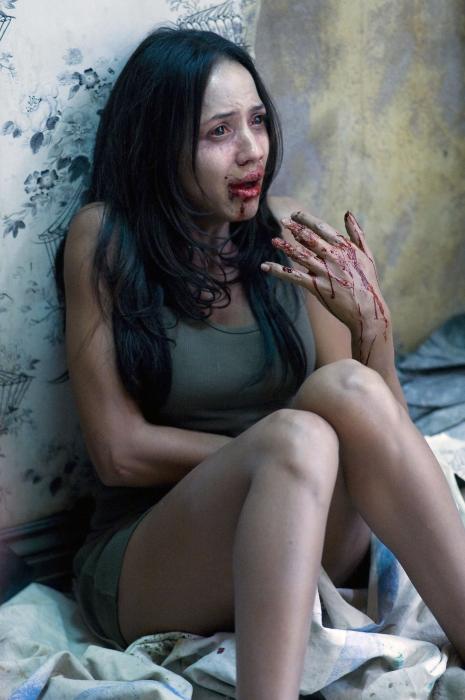 A television reporter and her cameraman are trapped inside a building quarantined by the CDC after the outbreak of a mysterious virus which turns humans into bloodthirsty killers.
PulpRoman's rating: 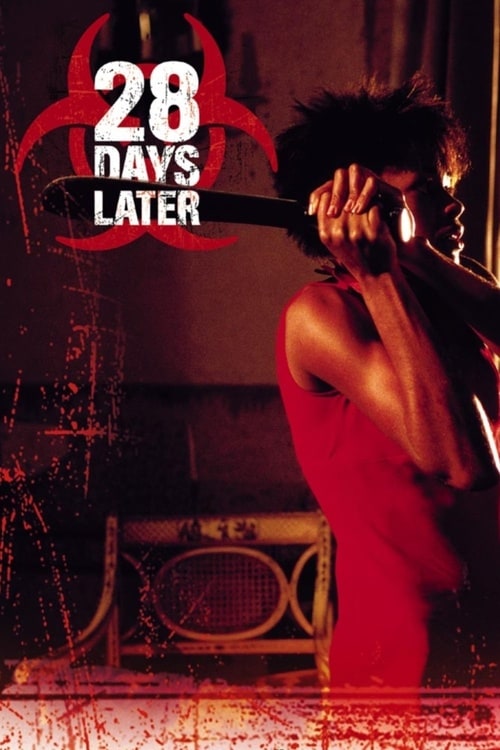 When a Rage Virus escapes from a lab (not sure why they were making that) and sweeps through England, very few uninfected are left behind. However, those that are still around are angry, blood-barfing spazzoids. So, yes, it’s a lot like London after the pubs close.
PulpRoman's rating: 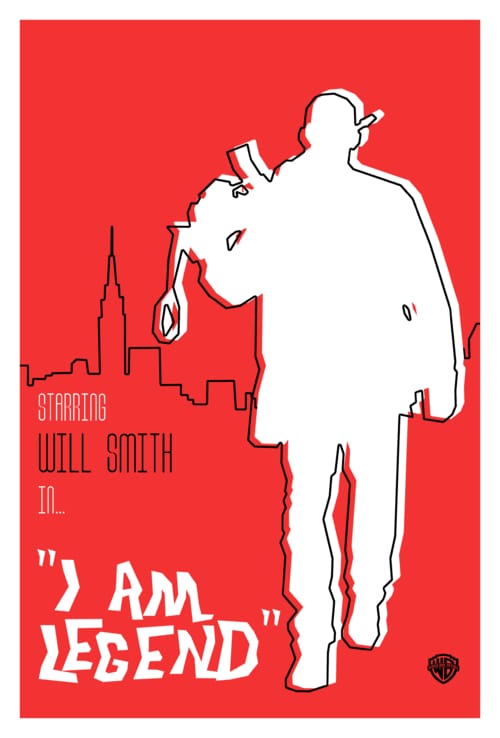 An attempt to cure cancer transforms the world population into vampire-like shitheads who can’t have anything nice. Oops. But look on the bright side, no more cancer.
PulpRoman's rating: 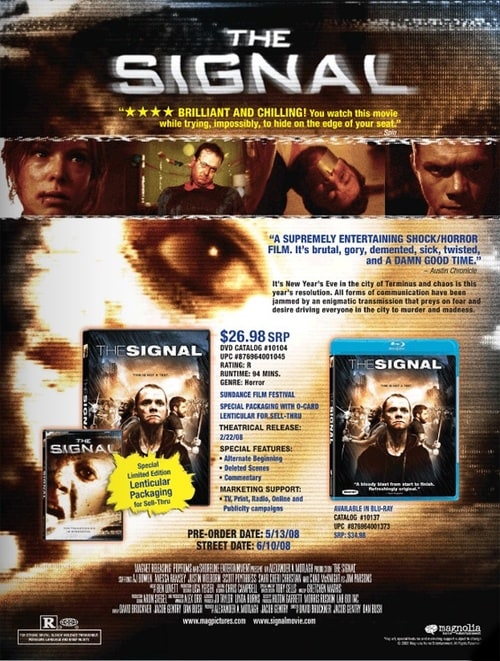 Telecommunication devices like televisions, radios, and phones emit a mysterious signal that amplifies people’s most negative traits, in most cases causing them to behave violently. Or gropey. It’s like living in one big mosh pit. That would be so terrible. I don’t know that it would effect me in that way but I would definitely talk with my mouth full and interrupt people while they’re telling stories, and that’s no way to live.
Rate:
Watched Wanted 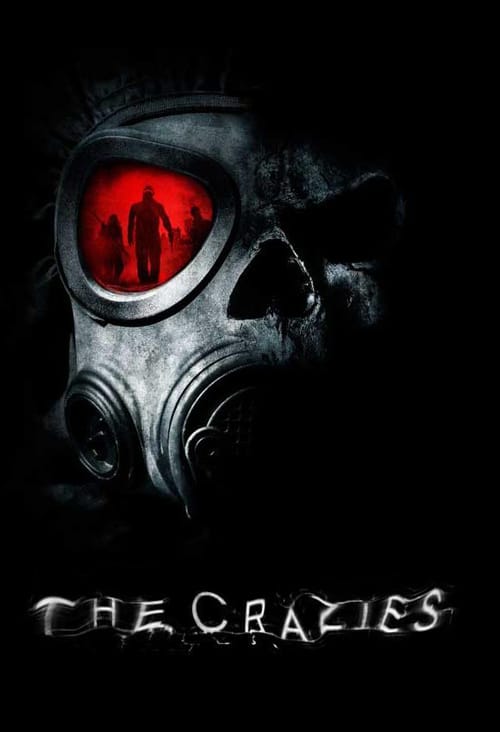 A chemical spill poisons the water supply of a small Midwestern town causing its residents to go on murder sprees. After that, their veins pop out of their skin while their eyes jaundice over. Again, let’s get a tighter lock down on these chemicals.
Rate:
Watched Wanted 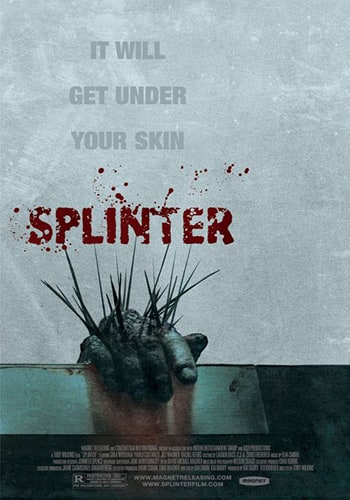 This mutant disease not only causes needles to poke out of your skin, but it also messes with your body after you die. I don’t want my body walking around after I’m gone and fusing with other bodies like some kind of gross Voltron. I’d much prefer a disease that keeps me down. 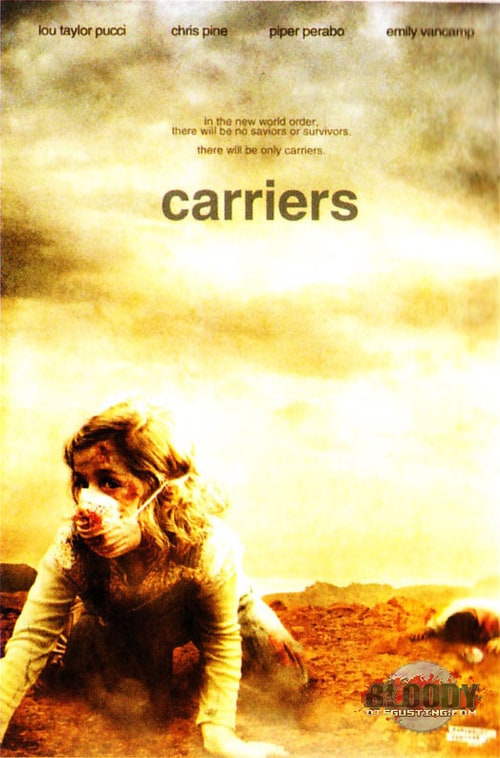 This disease seems like one that will put you out more than any other on the list. Everyone is distrustful, people shoot at you, there’s no gas which means a lot of walking, you have to wear a mask all the time, and your skin gets all bloody. Eff you, pandemic!
Rate:
Watched Wanted 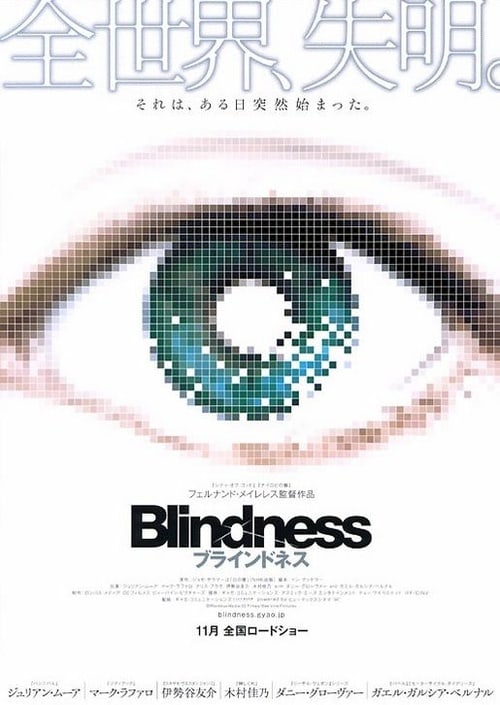 Imagine suddenly finding yourself inexplicably blinded. After groping your way outside, you learn that you’re not the only one and scientists have no explanation as to why it’s happening. That would suck. You’d have to relearn how to do everything and never know if you’re in a dangerous situation.
Rate:
Watched Wanted 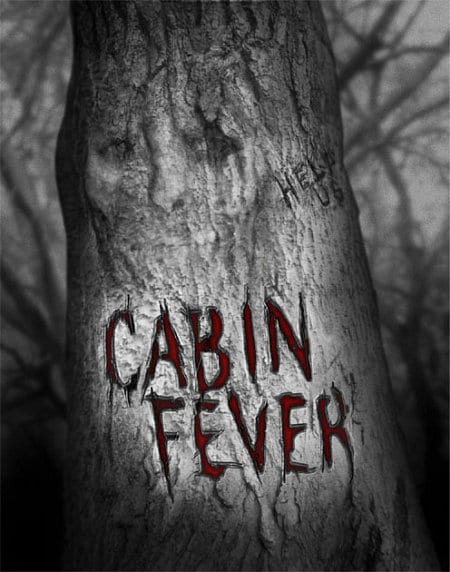 Cabin Fever, when it comes to flesh-eating diseases, you’re pretty much screwed and just counting down the days until you accidentally shave your face off or burst into a red puddle by walking into an non-air conditioned room.
Rate:
Watched Wanted 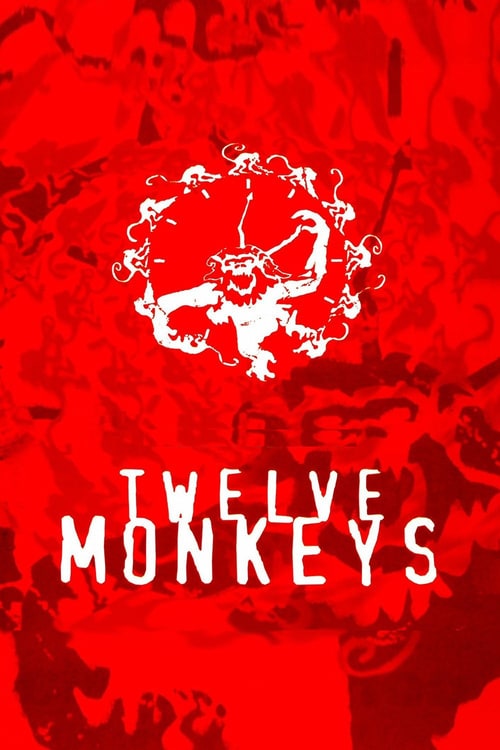 A fanatical scientist releases a virus that all but wipes out the world’s population, forcing survivors to live underground. Do you know how bad underground sucks? It sucks. There’s no natural light and the farting problem is just horrific.
PulpRoman's rating:

Outbreak could so totally happen. In real life, the Motaba virus was quickly dealt with after popping up in Zaire. However, in the film, all of North America began bleeding from their mouths, eyes, ears, and assholes after Patrick Dempsey smuggled a disease-carrying monkey into the United States. Let that be a lesson to all of us. Monkeys are awesome and we all want one, but they’re also dirty little disease factories. Much like strippers.
Rate:
Watched Wanted 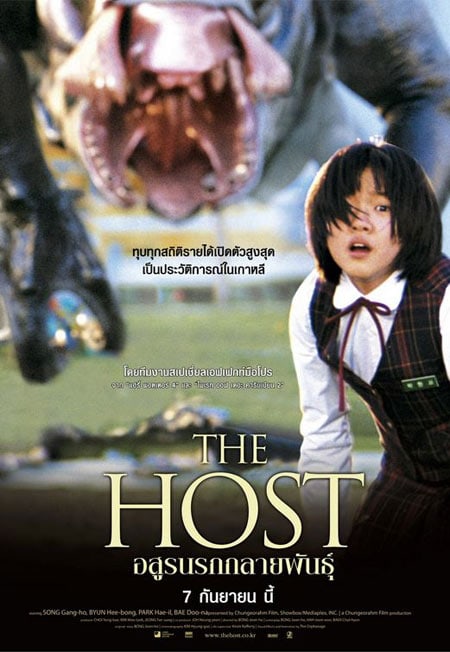 A Korean monster movie turns out to be a surprisingly touching family drama, as well as a tongue-in-cheek commentary on the response of individuals and governments alike to disease outbreaks. "The Host" tells of a mutated river monster that supposedly spreads a new virus, not dissimilar to real-world animals that can pass on certain diseases to humans. The monster's first attack causes widespread panic and an overbearing government clampdown complete with anti-bioterrorism units, decontamination efforts and mass quarantine. Individuals become hyperaware and suspicious of any symptoms of sickness, with masks appearing everywhere in public. The movie also adds to the sense of paranoia by making direct references to the real-life SARS outbreaks that struck Asia and reached 37 nations around the world, including the United States.
Rate:
Watched Wanted 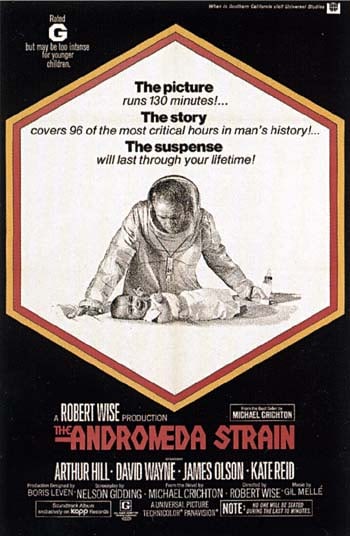 Extraterrestrial threats don't all need lasers — some arrive as microscopic agents that infect or kill humans en masse. Based on a novel by the late Michael Crichton, this movie tells of a military satellite which returns to Earth contaminated by a deadly extraterrestrial microbe that kills by causing rapid blood clotting. Scientists soon determine that the foreign invader came from a meteor that struck the satellite. That notion of space rocks carrying extraterrestrial life to Earth holds serious interest for real-life scientists, and some suggest that life on our planet may have some sort of off-world origin. But at this time, NASA worries more about its robotic explorers contaminating Mars or other worlds with Earth microbes.
PulpRoman's rating: 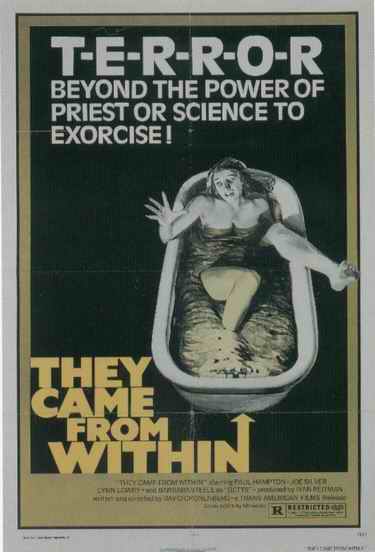 Shivers, by David Cronenberg, was also titled The Parasite Murders upon first release, which gives you a clue as to what sort of disease you are going to get in this film. The parasite is created by Dr Emil Hobbs, who wants to create an organism that will free people from society’s imposed good behaviour rules . He experiments with a parasite and implants it into a young woman called Annabelle. The parasite causes the infected to lose all their social and moral inhibitions and became lust crazed maniacs sexually attacking everything and everyone who they come into contact with. They will pass the parasite on through sexual activity. The virus is spread throughout an apartment complex with a lone doctor struggling to avoid infestation. Many people compare the film to Night of the Living Dead but with sex maniacs instead of zombies. It is a fitting description but Night of the Living Dead is more of a straight horror film whereas Shivers is a psychological study of the terror of having a parasite/disease invading one’s body and inflicting changes – fear of transmission. Some parts of the film are very talky. The ugly 1970s decor of the unattractive apartments serves to heighten the horror.

Custom
The close spaces, chance of sickness and an environment filled with tension throughout, what's not to love when human beings behave like rabid instinctive mammals without hypocrisy... survival is priority number one.

2000 : My Favorite Films by Dark Warrior

♫ Placebo - My Favorite by Villiana

Female Characters with Short Hair in Movies by Kandi