0
Peter Schmeichel
Denmark's Peter Schmeichel is arguably the best goalkeeper in the history of the Premier League. He had a glittering career that lasted from 1981 until 2003 and is best remembered for his hugely successful time in the Premier League with Manchester United - with whom he won countless trophies - and for helping Denmark to win the European Championships in 1992.
xeriminx's rating:

0
Roberto Carlos Da Silva Rocha
Roberto Carlos started playing for the Brazil national team in 1992. He played in three World Cups, helping the team reach the final in 1998 in France, and win the 2002 tournament in Korea/Japan. He was named in the FIFA World Cup All-Star Team in 1998 and 2002. With 125 caps he has made the second most appearances for his national team
He was nicknamed El Hombre Bala ("The Bullet Man") due to his powerful bending free kicks, which have been measured at over 105 miles per hour (169 km/h). He is also known for his stamina, running speed, technical skills, crossing ability, long throw ins and 24-inch (61 cm) thighs. In 1997, he was runner-up in the FIFA World Player of the Year. He was chosen on the FIFA World Cup Dream Team, and in 2004 was named by Pelé in the FIFA 100 list of the world's greatest living players.
xeriminx's rating: 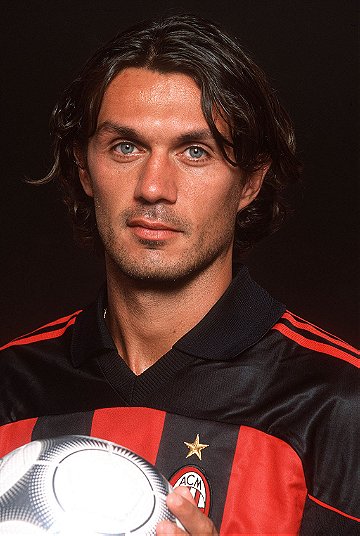 Maldini is considered to have been one of the greatest defenders of all time, and has been described as "an icon and gentleman of the game".
Throughout his career, Maldini was also considered to be a leader, both for Milan and for the Italian national team, earning the nickname "Il Capitano" ("The Captain").
He was known for his calm and composed manner on the pitch, as well as his ability to read the game, preferring elegance and intelligence to physicality and aggression when defending.
Maldini was the first defender ever shortlisted for the FIFA World Player of the Year award.

0
Rio Ferdinand
Rio Ferdinand is regarded by many to be one of England's greatest ever players and he is one of the most decorated English footballers of all time.
Ferdinand was considered an atypical defensive product of English football due to his more elegant, "continental" style of defensive play.
Ferdinand is regarded as one of the best defenders of his generation, and as one of England's best ever centrebacks. In his prime, he was also praised for his pace and tackling, in addition to his positioning and ability to read the game. He was also a strong defender who was reliable in the air, with strong leadership qualities.
xeriminx's rating:

0
Cafú
With 142 appearances for the Brazil national team, he is the most internationally capped Brazilian player of all time. He represented his nation in four FIFA World Cups between 1994 and 2006, and is the only player to have appeared in three consecutive World Cup finals, winning the 1994 and 2002 editions of the tournament, the latter as his team's captain where he lifted the World Cup trophy. With Brazil, he also took part in four editions of the Copa América, winning the title twice, in 1997 and 1999; he was also a member of the national side that won the 1997 FIFA Confederations Cup.
Regarded as one of the greatest full-backs of all time, one of the best footballers of his generation, and as one of Brazil's best ever players, Cafu was a dynamic, hard-working, offensive-minded, and energetic right-sided wing-back who is mostly remembered for his great pace, stamina, tactical intelligence, distribution, and technical skills, as well as his ability to make overlapping attacking runs down the right flank and provide accurate crosses to teammates in the area.
xeriminx's rating:

0
Arjen Robben
Known for his dribbling skills, speed, crossing ability and his accurate left foot long-range shots from the right wing, Robben was regarded as one of the best players in the world in his prime.
Robben is regarded as one of the best wingers in the world, with ESPN stating he is "able to take on and beat defenders at the drop of a hat, Robben's ability to get to the byline and deliver in accurate crosses instils fear into any defence". Usually deployed on the right wing, Robben often cuts inside on his left foot to move to a more central attacking position, and uses his speed and dribbling skills to take on defenders until he finds the space to make an attempt on goal.

0
Zinédine Zidane
Zinedine Yazid Zidane, popularly known in French as Zizou, is a French former professional football player who played as an attacking midfielder.
Zidane was an elite playmaker renowned for his elegance, vision, ball control and technique.
He received many individual accolades as a player, including being named the FIFA World Player of the Year in 1998, 2000 and 2003, and winning the 1998 Ballon d'Or. He was Ligue 1 Player of the Year in 1996, Serie A Footballer of the Year in 2001, and La Liga Best Foreign Player in 2002.
Capped 108 times by France, Zidane won the 1998 FIFA World Cup, scoring twice in the final, and was named to the All-Star Team. This triumph made him a national hero in France, and he received the Légion d'honneur in 1998. He won UEFA Euro 2000, and was named Player of the Tournament. He also received the Golden Ball for Player of the Tournament at the 2006 World Cup,
xeriminx's rating:

0
David Beckham
Played for Manchester United, Preston North End, Real Madrid, Milan, LA Galaxy, Paris Saint-Germain and the England national team, for which he held the appearance record for an outfield player until 2016. He is the first English player to win league titles in four countries: England, Spain, the United States and France. He retired in May 2013 after a 20-year career, during which he won 19 major trophies.
Known for his range of passing, crossing ability and bending free-kicks as a right winger, Beckham has been hailed as one of the greatest and most recognisable midfielders of his generation, as well as one of the best set-piece specialists of all time.
Beckham is regarded as a British cultural icon.

Midfielder (right) - ("The Sultan Of The Stepover"

0
Cristiano Ronaldo
Often considered the best player in the world and widely regarded as one of the greatest players of all time, Ronaldo has won five FIFA Ballon d'or/Best FIFA Men's Player awards, the most for a European player, and four European Golden Shoes. He has won 29 trophies in his career, including six league titles, five UEFA Champions Leagues, one UEFA European Championship, and one UEFA Nations League. A prolific goalscorer, Ronaldo holds the records for most goals scored in the UEFA Champions League (128) and the UEFA European Championship (9). He has scored over 700 senior career goals for club and country.
Ronaldo was named the best Portuguese player of all time by the Portuguese Football Federation in 2015. He made his senior debut in 2003 at age 18, and has since earned over 160 caps, appearing and scoring in ten major tournaments, becoming Portugal's most capped player and his country's all-time top goalscorer. He scored his first international goal at Euro 2004 and helped Portugal reach the UEFA Euro 2004 Final of the competition. He became captain in July 2008, leading Portugal to their first-ever triumph in a major tournament by winning Euro 2016, and received the Silver Boot. He became the highest European international goalscorer of all-time in 2018
Ronaldo became noted for his dribbling and flair, often displaying an array of tricks and feints, such as the step overs and so-called 'chops' that became his trademark.

0
Lionel Messi
One of the most prolific goalscorers and clinical finishers of all time, Messi is known for his powerful and accurate striking ability from both inside and outside the area, as well as his positioning, quick reactions, and ability to make attacking runs to beat the defensive line. While he is renowned for his eye for goal, he also functions in a playmaking role, courtesy of his vision and precise passing.
Despite being physically unimposing, he possesses significant upper-body strength, which, combined with his low centre of gravity and resulting balance, aids him in withstanding physical challenges from opponents; he has consequently been noted for his lack of diving in a sport rife with playacting.
Messi has won a record six FIFA Ballon d'or/Best FIFA Men's Player awards, and a record six European Golden Shoes. He has spent his entire professional career with Barcelona, where he has won a club-record 34 trophies, including ten La Liga titles, four UEFA Champions League titles and six Copas del Rey. A prolific goalscorer and a creative playmaker, Messi holds the records for most goals in La Liga (424), a La Liga and European league season (50), most hat-tricks in the UEFA Champions League (8), and most assists in La Liga (173) and the Copa América (13). He has scored over 700 senior career goals for club and country.

Movies Set in Africa by Kandi

Thundercats : The Cast by xeriminx

Goddess with a frozen age - Lure Hsu by xeriminx