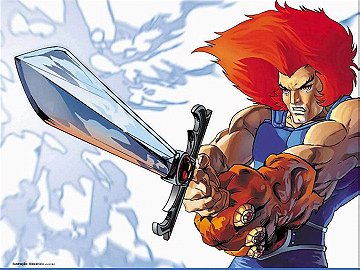 Lion-O is the leader and the hereditary "Lord of the ThunderCats." Lion-O, based on the lion, wields the legendary Sword of Omens, which is able to fire bolts of energy and allows Lion-O to see across great distances with its power of "Sight Beyond Sight", as well as the Claw Shield, a gauntlet that launches grappling lines from its claws. 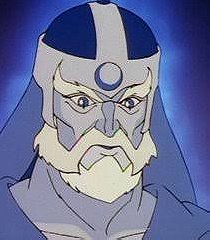 Jaga was a male Thunderian noble and a ThunderCat. Jaga was Claudus' successor as Lord of the ThunderCats and keeper of the Sword of Omens after Claudus was blinded fighting the Mutants. Jaga was once good friends with Grune until the latter's betrayal. 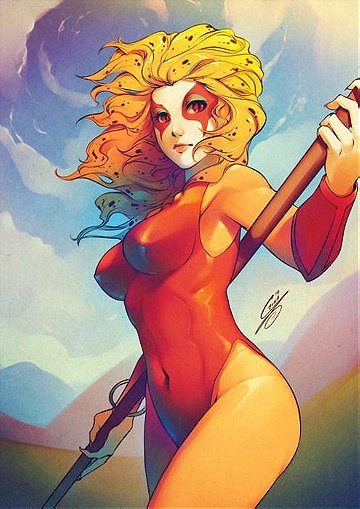 Cheetara is a female ThunderCat based on a cheetah with an anthropomorphic humanoid physical form, along with an athletic build. She is normally seen wearing a one-piece orange leotard that has her ThunderCat emblem at the front of her bosom, and orange boots. 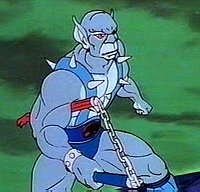 Panthro is physically the strongest ThunderCat and is a cunning warrior in combat, relying as much on martial arts as on physical strength. With Tygra’s help, he builds all of the vehicles the ThunderCats use on Third Earth — including the ThunderTank, the Feliner and the ThunderClaw, ThunderStrike and HoverCat. In combat, he uses a pair of chained Fighting Sticks (nunchaku)

Tygra is able to turn himself invisible to the naked eye. He also possesses mind power, which enables him to creates illusions that can deceive his opponents; using this power however drains him.
Tygra is also an intellectual, being the architect of the group, and has been seen conducting scientific research sometimes (he even works in a laboratory sometimes). He's grounded and calm, usually considering every aspect of a situation rather than rushing into conclusions or actions. 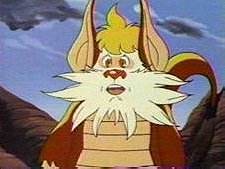 Entrusted with the care of the young Lion-O, Snarf Osbert (known simply as “Snarf” to his fellow ThunderCats) often thinks of himself as the oldest member of the group. Although Snarf is an excessive worrier and something of a pessimist, his courage and loyalty is as evident as any full-sized ThunderCats, particularly when defending Lion-O. 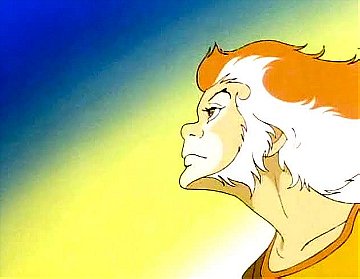 Wilykat is the brother of Wilykit and the older of the two Thunderkittens. They were close to Lion-O's age when escaping Thundera before its destruction.
WilyKat is the more cautious of the two and he often shows his adventurous sister concern.
WilyKat and Wilykit's primary weapons are the grenade capsules on their belts, containing a variety of chemical, smoke, and incendiary compounds.

Wilykit is the female Thunderkitten, the sister of Wilykat, and she is the youngest of the Thundercats.
Wilykit is a very adventurous young lady, she spends most of her time with her brother Wilykat. The pair of young thunderians are playful and active. She does not go on as many missions as the older thundercats. 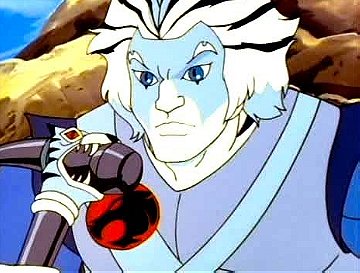 Bengali is a tiger-like Thunderian with blue and white stripes.
Bengali is a blacksmith who wields the Hammer of Thundera, which functions both as a tool and a weapon. The hammer is capable of emitting energy beams similar to other ThunderCats' weapons. As he explains to Lion-O, only a Thunderian blacksmith could reforge the Sword of Omens. This makes him an indispensible addition to the ThunderCats' force. 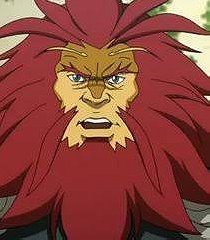 Claudus is Lion-O's father and the previous Lord of the ThunderCats. Contrary to popular belief, Jaga was not a relative of Lion-O, only a mentor for the young heir to the ThunderCats throne, when they escaped the destruction of Thundera. 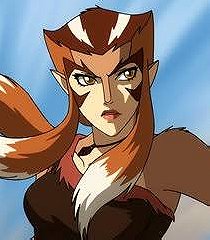 Pumyra is a young female Thunderian introduced in the second season. This young woman, based on the puma, is a talented healer and medic. She uses her knowledge of Thunderian medicine, combined with the wide range of medicinal supplies to be found on Third Earth, to help heal and cure her fellow ThunderCats.
In combat, she uses a special whipcord, which resembles a "cat’s tail," that can launch special pellets and spheres with a slingshot. 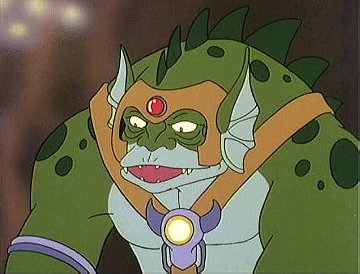 Slithe or S-S-Slithe is the leader of the Mutants and a very dangerous enemy of the ThunderCats. Although lacking sophistication, he can be very cunning. Domineering and impatient, Slithe often must browbeat the other Mutants into going along with his plans. He has a tendency to emphasize on pronouncing the letter "S" in his speech, usually ending his sentences with the question, "Yes-s-s?" He also holds little to no respect for Mumm-Ra. 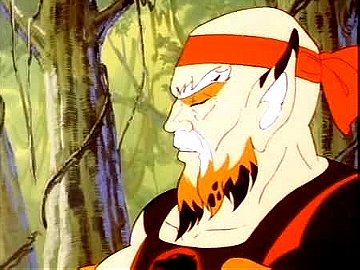 Lynx-O is the oldest ThunderCat alive. He was blinded by fire before Thundera exploded. He has been able to fine-tune his other senses because of this. A Braille board was made for him, so he could learn about the Lunataks. Now it is used to help guide through the Forest of Mist and to learn about other things before the rest of the ThunderCats learn about them. Lynx-O is based on the Lynx. 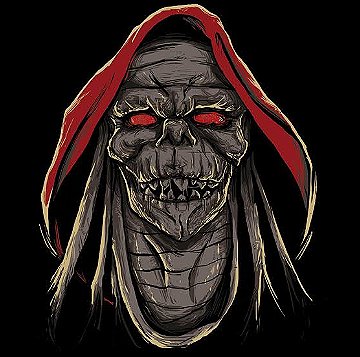 Mumm-Ra is a fictional character from the animated TV series ThunderCats. He is the main antagonist on the show, demonstrating absolute mastery of magic. He often uses the Mutants of Plun-Darr as pawns in his schemes to defeat the ThunderCats. Their original intention was to steal, and utilize the power of the Eye of Thundera (and in one episode, the Star of Thundera as well); however, this swiftly shifts to a series-long determination to outright obliterate the ThunderCats.
Mumm-Ra usually resides in his Black Pyramid as a withered, corpse-like being; however, he can alter his form by reciting the following incantation: "Ancient spirits of evil, transform this decayed form to Mumm-Ra, the Ever-Living!" This transforms him into a muscular fiend who menaces the ThunderCats with episode-long challenges before being driven back into his sarcophagus. In later episodes, while endowing Mumm-Ra with his powers, the statues of the Ancient Spirits of Evil come down from their perches, extend their arms over him as the powers of evil flow into Mumm-Ra. 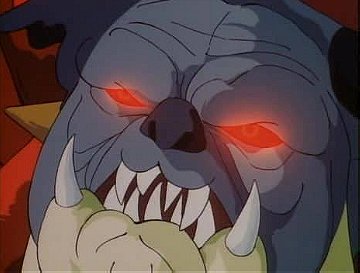 Ma-Mutt is Mumm-Ra's pet, who greatly resembles a demonic bulldog. While incapable of speech because of his canine physiology. He appears to be a sentient being of roughly human intelligence, capable of following complex plans and successfully posing as Mumm-Ra and mobilizing the mutants. He was also able to speak in this form, presumably because it posessed a more articulated mouth and vocal cords.
He has demonstrated the ability to fly as well as to grow in size and seems to have greatly enhanced strength. As well as this he has been shown as highly competent at whatever task he undertakes, but he is absolutely loyal to his master, Mumm-Ra, who appears to likewise consider Ma-Mutt as his only true ally and friend. 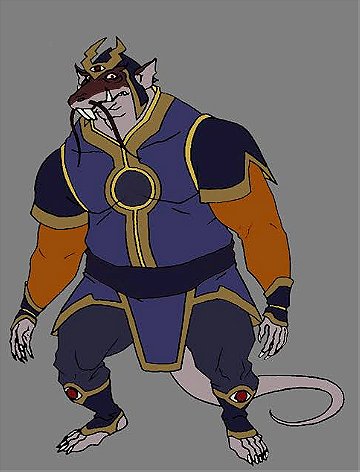 Ratar-O is one of the commanders of the Mutants and captain of The Ratstar.
His weapons of choice are a pair of sais called the Rat's Eye. He can also fly using boosters in his shoe
Arrogant and domineering leader, Ratar-O is a Mutant commander. Ratar-O has proven to be one of the ThunderCats’ deadliest foes. He once forced Slithe into serving under him. 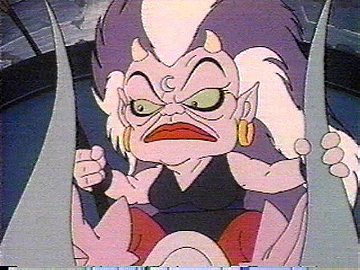 Luna is a diminutive sorceress, now the leader and chief strategist of the Lunataks.Because of her small form, she is carried around and cared for by Amok, her servant.
Cruel and caustic, Luna commands the Lunataks by birthright. 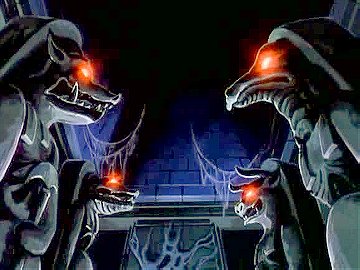 The Ancient Spirits of Evil are evil spirits that Mumm-Ra summons in order to transform himself into Mumm-Ra, the Ever-Living. In addition, he sometimes invokes the Ancient Spirits of Evil to transform himself from Mumm-Ra, the Ever-Living to other forms to suit his purposes, such as the Netherwitch or Diamondfly. The spirits are represented by four large statues surrounding the cauldron (boar, crocodile, bull, vulture) 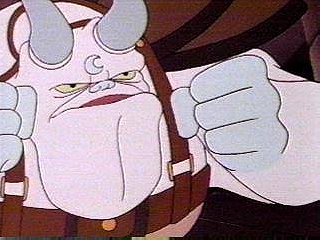 Amok is Luna's loyal servant and bodyguard, also her chief mode of transportation.
Amok's a hulking, quadrupedal brute who seems to be a cross of bulldog and demon, and having very limited capacity for vocalization. Amok is strong and fast but also displays enough cunning to exact revenge against Luna for abandoning him when she recovers Queen Luna's magical belt . He also has an innate weakness for candy, and will abandon Luna in an instant if it means getting to eat it. 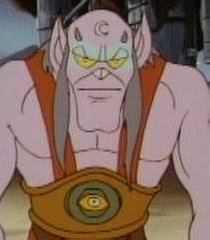 Alluro is a master of deception, mind games, and psychological warfare.
Alluro’s dark evil nature is boundless, and the Lunatak takes great delight in the mental cruelty he is able to inflict on his enemies. However, like many of his kind, Alluro’s courage is only as strong as his ability to control his enemies, a weakness that the ThunderCats often exploit. He has twice shown a desire to overthrow Luna and become the leader of the Lunataks (Psych Out and Crystal Canyon.) 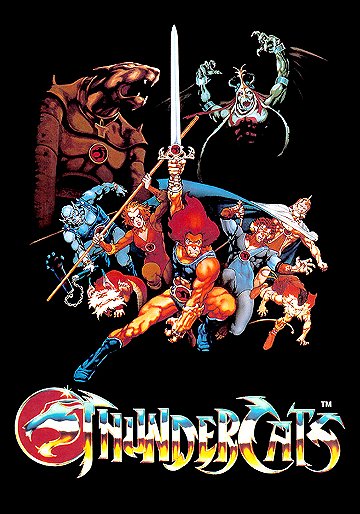 The Thundercats, led by the young Thundercat Lord Lion-O, are fighting evil on Third Earth. 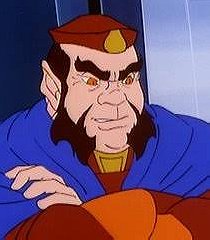 Baron Tass is an overweight Thunderian man. He arrived on New Thundera and tried to cash in on old debts. Lion-O forbid him though. He is shown to have a history with Torr. He and Mr. Grubber found the location of his old estate and used water from the Well of Doubt to make the Lord of the ThunderCats doubt himself. 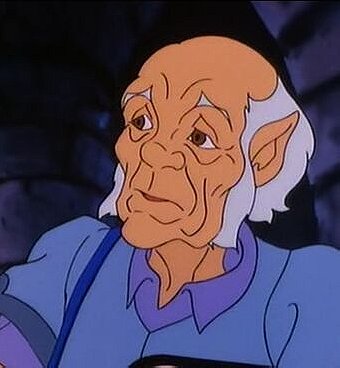 Mr. Grubber is the sidekick of Baron Tass and is always at his side. He serves as Baron Tass' bookkeeper. 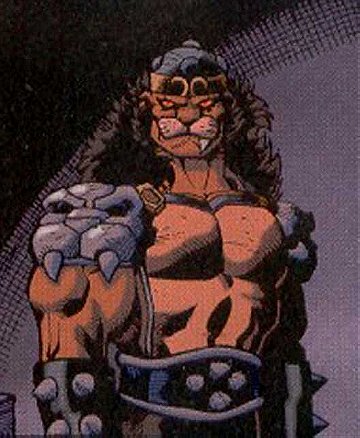 Also known as Grune the Destroyer.
Grune was a ThunderCat and the general in command of Thundera's armies. His great-grandfather was Lord of the ThunderCats. 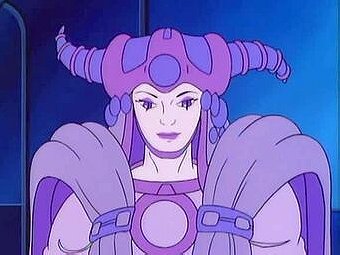 Jagara is an ancient ThunderCat Sorceress. She guards the Mighty Gyroscope on New Thundera. Leah is a young Thunderian girl who crashes in the Jungle of Darkness. 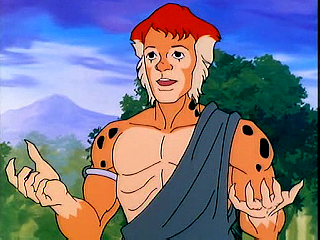 Torr is a young Thunderian commoner. Torr and his group returned to New Thundera after it reformed to resettle their homeland. When they arrived on the planet they were captured by the robotic Two Time and kept prisoner. The ThunderCats saved him and his group, even though New Thundera was unstable he refused to leave his home.

Jackalman is a member of the evil Mutants. He is the leader of the Jackelmen from the planet Plun-Darr. 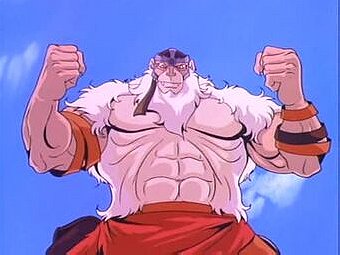 Monkian is a fictional character in the animated television series ThunderCats. He is a member of the evil Mutants. He is a humanoid monkey. 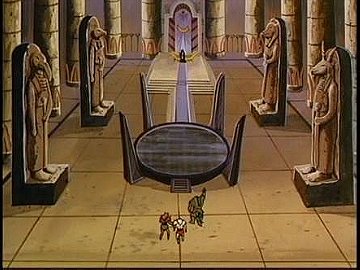 The Ancient Spirits of Good were good spirits that Mumm-Rana called upon in order to transform herself into Mumm-Rana, the Ever-Good.

Mumm-Rana would transform by the making following the request: "Ancient Spirits of Goodness, Transform this gentle form, to Mumm-Rana, the Ever Good". Mumm-Rana, the Ever-Good is the polar opposite version of the evil Mumm-Ra, the Ever-Living. She resides in the White Pyramid and calls to the Ancient Spirits of Good. She also has the ability to transform from her mummified state to a much stronger warrior form.

The "The Middle" Cast
10 item list by Maary
5 votes

Favorite Albums released in 1992 by lovedriver

She's Rockin' Out! by WendyLorene

Steves Are Funny People, Too by Agirl

Goddess with a frozen age - Lure Hsu by xeriminx