1987: The Commodore 64 version of Maniac Mansion was the first game to use the SCUMM scripting language. This was referred to as 'Version 0'.

1987: An improved SCUMM 'Version 1' made it into the DOS version of Maniac Mansion, and enhanced re-release the following year were 'Version 2'.

1988: The second (and last) game to use SCUMM Version 1 was this alien mind-control adventure game. DOS re-issue were Version 2, and the FM-Town version was Version 3.

1989: The Graphic Adventure game (not its Action Game cousin) of The Last Crusade was released on SCUMM Version 3.

1990: LucasArts brought us Loom, built with SCUMM Version 3, and Version 4 for its VGA CD edition.

1990: The original diskette version of the first installment of the popular Monkey Island series was coded with SCUMM Version 4.
List-All's rating:

1991: The 256-color VGA re-issue of Secret of Monkey Island, now on CD-ROM disc, was coded up with SCUMM Version 5. It was also the first time iMUSE (Interactive Music Streaming Engine) was added to SCUMM.
List-All's rating: 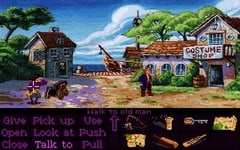 1991: This sequel in the Monkey Island series retained the same SCUMM engine, Version 5, as the CD-version of Secret of Monkey Island.
List-All's rating:

0
Indiana Jones and the Fate of Atlantis - PC Games

1992: The followed up to the successful Last Crusade brought Indy on a quest to find lost Atlantis artifacts. This was also coded with SCUMM Version 5, same as the first two Monkey Island hits.
List-All's rating: 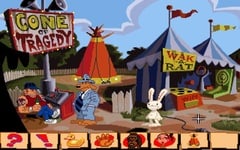 1993: With a slew of huge hits behind them, LucasArts released Version 6 of their SCUMM engine in another big hit, Sam & Max Hit the Road, whose series is still alive and well to this day.
List-All's rating:

0
Day of the Tentacle - PC Games 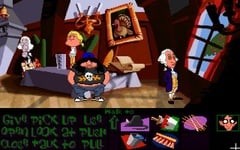 1993: Six years after the original started off the SCUMM series of adventure games, Maniac Mansion returned, coded up with Version 6, in its sequel, Day of the Tentacle.
List-All's rating:

1995: Full Throttle gained a following that is still popular to this day (despite a sequel that ended up getting canned). It was programmed with latest SCUMM Version 7.

1995: Crtically-praised Sci-Fi adventure that was released when the adventure genre was starting to fade away, The Dig used the same engine as Full Throttle; Version 7.

1997: The SCUMM engine finished off in grand style, thanks to the huge hit and part three of the Monkey Island series, The Curse of Monkey Island. It was coded up with the latest SCUMM Version 8. Many of these hits can now be played on the latest hardware thanks to the free ScummVM engine. 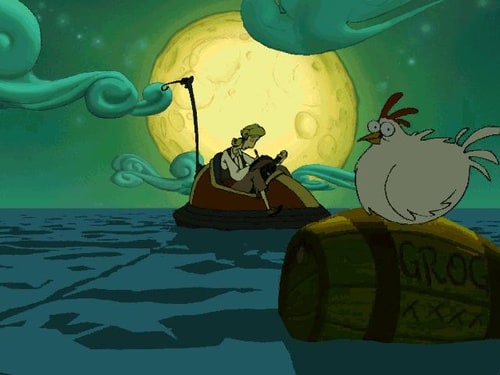 The developer of SCUMM took its license and started up his own company, Humungous Entertainment, and released a few obscure games based on newer versions of SCUMM, namely the Spy Fox series of children's games.
List-All's rating:

SCUMM (Script Creation Utility for Maniac Mansion) is a scripting language developed at LucasArts (known at the time as Lucasfilm Games) to ease development of the graphical adventure game Maniac Mansion.

It is somewhere between a game engine and a programming language, allowing designers to create locations, items and dialogue sequences without writing code in the actual language the game source code would end up in. This also meant that the game's script and data files could be re-used across various platforms.

SCUMM was subsequently reused in many later LucasArts adventure games being both updated and rewritten several times. There are at least 10 known versions of the SCUMM engine, numbered as "version 0" (for the original Commodore 64 version of Maniac Mansion), "version 1", "version 1.5" (for the NES version of Maniac Mansion), and "version 2" up through "version 8". LucasArts finally abandoned the SCUMM engine in 1998 when they switched to GrimE, using the free software scripting language Lua, for the games Grim Fandango and Escape from Monkey Island.