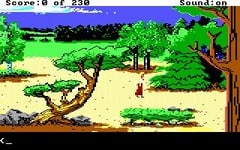 Part of the King's Quest series.

1988: The first Leisure Suit Larry sequel was coded with SCI0 with 16 colors and MIDI sound support. Due to criticism of too much sexual scenes in the first one, this game was highly toned down.

1988: The sequel to Police Quest focused more on detective and forensics work than the traffic-cop gameplay of the first game.

1989: The third chapter in the Space Quest series, The Pirates of Pestulon was one the first games to support the new Sound Blaster sound cards, as well as they added mouse support and an improved text parser for input.

The plot, about rescuing two programmers being held against their wishes at the evil ScumSoft, being forced to design their awful games, was a jab at Sierra's rival LucasArts and their SCUMM series of adventure games.
List-All's rating:

1989: The first installment in the long-running Hoyle series of table and card games was programmed with SCI0 language.
List-All's rating:

1989: Lori Ann Cole and her husband Corey designed this new Sierra game series, a hybrid Adventure/RPG game called Hero's Quest. The smooth mixture of Sierra's classic adventure game style (with lots of funny puns throughout) with the ability to customize and develop your character (and import him into the next sequel) makes this game a fan favourite for years to come.

Part of the Quest for Glory series.
List-All's rating:

1989: The third Leisure Suit Larry game returned back to the raunchy adult themes that was absent in the second title. It was also the first Sierra adventure game to have unique customizations (such as changing colours of the input boxes) as well as the first to switch character part way thru the game, to see the story from another person's point of view, in this case, Patti's.

1989: The first in the short-live 'Laura Bow Mysteries' series by Roberta Williams, this game was coded with SCI0 and used many similar gameplay elements of the first graphical adventure game, 1980's Mystery House.

1989: This spy adventure game from Jim Walls, creator of the Police Quest series, was critically panned, mostly due to its frustrating submarine simulator which made up a large portion of this game. Iceman was meant to be the first part of a Codename series, but disappointing sales ended the would-be franchise after one title.

0
Conquests of Camelot: The Search for the Grail... - PC Games

1990: The Search for the Grail is the first of a two-part Sierra series, designed by Christy Marx, using the SCI0 engine. The gameplay is typical of other Sierra adventure games, however it is enriched with several arcade sequences, puzzles and riddles.

No longer published by Sierra, Christy Marx offers Conquest of Camelot for free on her website.

1990: Following the success of the first Hoyle volume, the second one dealt with only Solitaire and all its variants.

1990: Quest for Glory II was one of the first Sierra games to use the updated SCI1 interpreter. Even though SCI1 added mouse-drive support as well as 256-color VGA graphics, it was up to the developer to call it out. Trial by Fire was still coded with EGA 16-color graphics and a text-parser for character input, in part to keep development time quick for the second chapter of the Quest for Glory series.
List-All's rating: 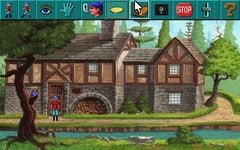 1990: The first Sierra game to fully utilize the new SCI1 engine, the fifth part of the King's Quest series brought to Sierra fans the beauty of 256-color graphics (still at 320x200 resolution) and a completely re-designed mouse and icon driven interface to eliminate text-parser input.

1991: The 16-color diskette version of Jones in the Fast Lane was the last Sierra game to be coded with SCI0. The 256-color version was coded with the SCI1 engine.

1991: The third volume of the Hoyle series of table and card games brought 256 colors to the mix.

1991: Released on floppy discs and coded with the SCI1 engine, this was the next chapter in the popular Space Quest sci-fi adventure game series from Sierra.

1991: The first game in the Leisure Suit Larry series to get the 256-color icon-based treatment, LSL5 is actually the fourth title in the series (creator Al Lowe said he'd never made a number 4, so he skipped it and called this one 5).
List-All's rating:

1991: The first in a series of two education adventure games from Sierra, EcoQuest is designed to teach kids the importance of environmental ethics.

1991: The first Sierra classic that was given a 256-color icon interface make-over with the help of the SCI1 engine was the first part of the Leisure Suit Larry series. It re-drew Larry as more of a short cartoonish guy, first seen in LSL5.
List-All's rating:

1991: The game is designed with younger gamers in mind, and features a simple VGA interface with two actions, "Do" and "See", rather than the full icon bar used in other Sierra games.

1991: The third part of the series, Police Quest 3 was also the last release that original designer Jim Walls was involved with, and SWAT found Daryl F. Gates

Part of the Police Quest series.

Part of the Space Quest series.

0
Conquests of the Longbow: The Legend of Robin Hood... - PC Games

1991: The second title in the 'Conquests' adventure series by Christy Marx takes us into the world of Robin Hood, this time in full 256-color graphics and using the icon-based interface first seen in King's Quest V.

No longer published by Sierra, Christy Marx offers Conquest of the Longbow for free on her website.

1991: An educational game designed for kids ages 12 and up, Dr. Brain offers up many puzzles that deal with mathematics and logic solving. It was followed by 1992's The Island of Dr. Brain.

1992: This Sierra re-make brought Mother Goose to her full 256-color glory, along with a very different, child-friendly icon interface. The game would be remade a final time in 1996, in the Deluxe version, to SVGA graphics.
Sierra's Creative Interpreter (SCI) is the scripting language created by Jeff Stephenson of Sierra On-Line for its adventure games after the older AGI. While AGI was a procedural language, SCI is completely object-oriented.

Although continuously developed between 1988 and 1996, five major versions can be isolated: SCI0, SCI1, SCI1.1, SCI2 and SCI3. This list deals with the early versions, SCI0 and SCI1.

SCI0: First used in King's Quest IV in 1988, SCI0 allowed for 320x200 resolution with 16-color EGA graphics, as well as music-card support. Input for adventure games was done thru a text parser (manual input of commands you wished the character to perform).

SCI1: Released in 1990, the biggest difference for SCI1 was support for 256-color VGA graphics, still at a resolution of 320x200, though 16-color EGA was still available (many games were sold in both 16-color and 256-color versions at that time). Most SCI1 games are also mouse-driven, using an icon-based interface.

[Series] Quest for Glory by Prelude

My Pinball Pleasures by AJWyrm

Powered by UnrealEngine2 by List-All

Prince of Persia by List-All