Age of Mythology is a mythology-based, real-time strategy game developed by Ensemble Studios and published by Microsoft. It was released on November 1, 2002 in North America and a week later in Europe.

Age of Mythology focuses less on historical accuracy than previous games in the Age of Empires series, but instead centers upon the myths and legends of the Greeks, Egyptians, and Norse. Its campaign follows an Atlantean admiral, Arkantos, who is forced to travel through the lands of the three civilizations in the game, hunting for a cyclops who has turned Poseidon against Atlantis.

Released a year after AoM, The Titans adds a fourth civilization to the game, the Atlanteans, and 3 new major gods, plus new units, buildings and god-powers. It also includes many new features, such as auto-queueing, and the ability to summon a Titan, a powerful, gargantuan, godlike being that forms the games focal point.

AoM: Gold Edition gives you the original Age of Mythology as well as the AoM: The Titans expansion pack. 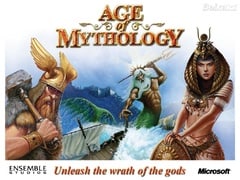 Ensemble Studios began work on their first fully 3D engine, the BANG! engine, in parallel to their development of Age of Empires II: The Age of Kings. This new engine was to be used in a new game, codenamed RTSIII. RTSIII would eventually be revealed as Age of Mythology.

In developing Age of Mythology, Ensemble Studios decided to move away from the center of the Age of Empires series, history, to avoid becoming stale and repetitive. This allowed them to work with new ideas and concepts.

Age of Mythology underwent a large amount of play-testing during its developmental phase, as Ensemble Studios attempted to create a more balanced and competitive game than its predecessors. Greg T. Street commented that one of the reasons Age of Mythology became so popular was because the development team spent many hours working on the game through active testing, rather than just taking advice from a "faceless drone in another building."

There was much debate during Age of Mythology's construction concerning the unbalanced nature of god powers and how to make them "fair" while still maintaining an element of fun in them. It was concluded that the best way to make it fair for everyone was to limit the use of god powers to one a game.

My Pinball Pleasures by AJWyrm

People I can't stand playing in films by vulpeszerda

Games played in 2012 by vasova

(Spoilers) More powerful in the book #2 (order of by Hobbit