Just Awful (And Not in a Good Way) 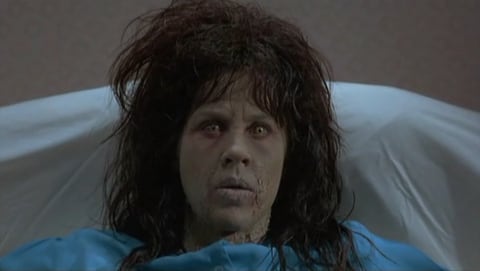 I had the same expression throughout this movie.

I really wanted to like this. I really did. Leslie Nielson and Linda Blair in a spoof of The Exorcist? How could that possibly be bad? Well... it could have awful writing, and jokes that usually fall totally flat. This could have been so much more. This SHOULD have been so much more. The Exorcist deserves a better spoof than this. You can't half ass a spoof of a classic.

But alas...'tis just awful. The only good thing about this movie is that Linda Blair looks great in it (when she's not blowing chunks or doing something else unflattering). 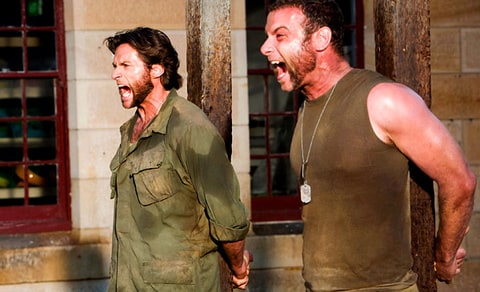 Jackman, and Schreiber have a screaming contest.

Ridiculous was the first word to come to mind after I watched this tripe. Corny was the next. That pretty much sums up this piece of dog (or should I say wolverine?) crap. Some movies these days just ooze douchebaggery, and this is one of them. 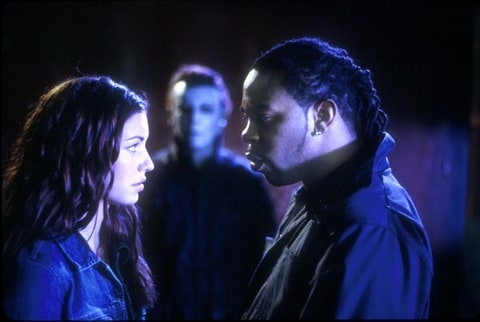 "Maybe, if you bust a rhyme, Michael will go away."

What do you get if you take the movie franchise Halloween, the show Big Brother (or any other recent, similar "reality" show), and one rapper turned actor, named Busta Rhymes, and mix them together? You get this movie.

Awful idea. Awful casting. Awful movie. This is what happens when Dimension Films gets a hold of a horror franchise that was already rolling down hill. They just keep right on rollin'.

I will admit though, that the mask in this one isn't quite as crappy as some of the others in the series, but it still isn't quite right either.

I'll also admit that Busta Rhymes is a good rapper (at his best during the Leaders of the New School years), but I'm not sure that translates to acting ability. He should stick to what he's good at. 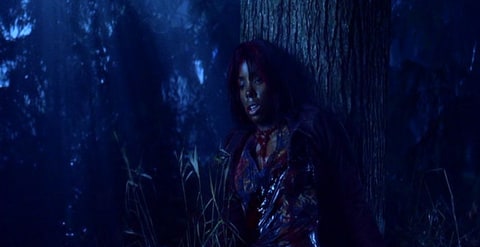 I'm pretty sure this scene is what everyone paid the ticket price for.

The idea of sticking these two slasher icons into a movie together had been tossed around for many years before anyone actually did anything with it. Now that it's been done, I kind of wish they had never done it.

The fight scenes between Freddy and Jason are almost like modern martial arts films. I just couldn't dig it. It was all just a little too ridiculous for me, with all the cable work. I didn't expect much from this movie though, so I can't say I was all that surprised or disappointed. I figured it would suck, and it did for the most part. And what the hell is with these rappers / singers (Kelly Rowland in this case) turning actor, and then doing horror remakes / sequels?

Two and a half hours of shots like this would have been more tolerable.

Shallow junk. this movie hardly warrants it's two and a half hour runtime. Actually it doesn't warrant it at all. This could have been 90 minutes (or preferably less), and sucked just as hard. Sure, we all know Megan Fox is pretty hot, but she's not hot enough to keep my attention for two and a half hours of weak filmmaking. 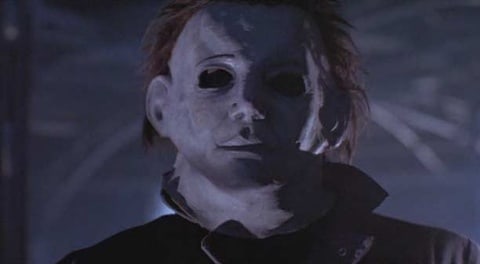 Dimension Films' first attempt at cashing in on the Halloween franchise, born 17 years earlier. A failed attempt, in my opinion. They threw in some of the occult in this installment, which just didn't jibe, and just served to muddle things. I guess they needed to spice up the series a bit, since by this time it had been shelved for 6 years, and was quite stale.

Oh and the mask they used looked kind of goofy (a problem in every sequel after the second), unlike the original Shatner mask. 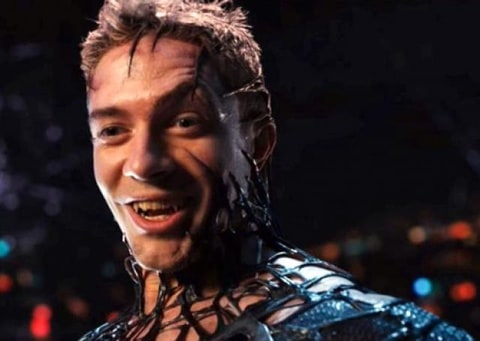 That face says it all. Douche.

This movie oozes douche. Tobey Maguire is usually kind of douchey, but he is even more so in this movie, because it calls for him to be a total douche. Then there is Topher Grace, whom I cannot f%#&ing stand, and want to punch out every time I see him. He makes me want to gouge my eyes out, and jam pencils into my ears. It's like a douche tag team. Kill me now. 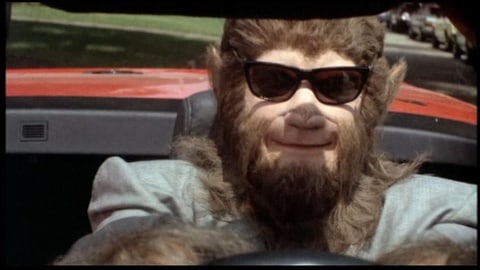 Hopefully he's not shedding in that Ferrari.

This sequel makes the first Teen Wolf look like a masterpiece. It's main problem is that it doesn't have Michael J. Fox, who was the only reason the first movie was half decent, and at least watchable. The replacement, Jason Bateman, isn't bad, but he isn't great either, and lacks most of the charisma that Fox brought to the first movie. It ends up being just an obvious attempt at cashing in on the first movie's moderate success (relative to other independently produced films). 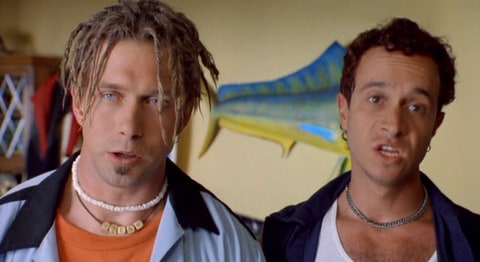 I'm pretty sure Baldwin's necklace spells out "Moron". Shore's face sure does.

I really wasn't expecting much from this - as it's a movie with Pauly Shore - but this was crappier than I had imagined it would be. Stephen Baldwin's presence probably doesn't help things either. Together they are even worse than they are alone. They become this monstrosity of moronism. 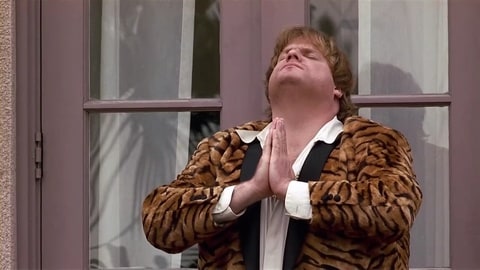 Farley prays that no one will ever watch this movie.

I think I read somewhere that Chris Farley actually cried the first time he saw himself in this, because he was so ashamed. I don't know if that's true, or if I even actually read that anywhere, but if I did, and it is true, I can see why. This is not one of the high points in Farley's career (which was too short, I might add). 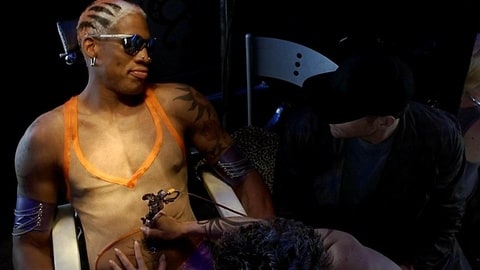 "What the f--- is he wearing?" pretty much sums up my thoughts on this movie. This has got to be the worst career move JCVD (that's right, I just called him JCVD) has ever made. Rodman is not only a horrible dresser, but a horrible actor as well. Who would have guessed? 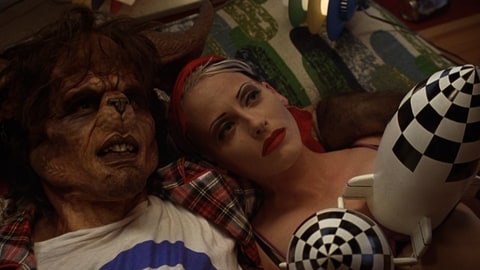 Tank Girl always wanted to know what it was like to screw a kangaroo. Now she knows.

Having never read the comic, I can't compare the movie to it, but the movie was pretty lame. I have a feeling that the movie doesn't do the comic justice. Or maybe the source material (the comic) just sucks too. I don't know, but what I DO know is that this movie tries too hard to be "cool" most of the time, and fails all of the time. 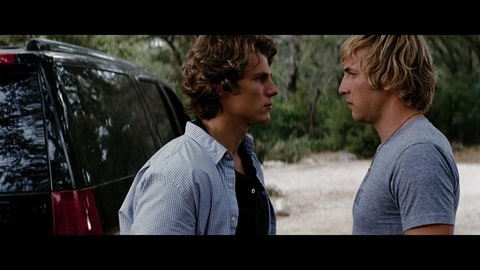 I'm pretty sure they are going to kiss.

Another douchey movie. I'm sure some of it was intentionally douchey, so that you would kind of want the douche bags to get killed off in horrible ways, but it was just too much douche for me, personally (kind of like the first couple of sentences of this rant). The protagonist is probably the only person in this that doesn't totally ooze douche, but even he oozes a little.

2.5
Battlefield Earth (2000)
This list is a work in progress. And I guess it will be as long as I keep watching movies.

A list of movies that I consider to be just awful - and not in any "so bad it's good" sort of way (I am working on another list for that). These are movies that I could barely sit through and that irked me in some way(s) that ruined the movie for me.

This is all just my opinion, of course. I am sorry if I just come across like a hater.

Quote Me On That: A List of Great Film Quotations by Rossjm

Drugs' Lists About People by drugs

A Nightmare on Elm Street Series + Commentary by Grisly Atoms

Watched in 2011 by Grisly Atoms