In Praise of Muhammad Ali 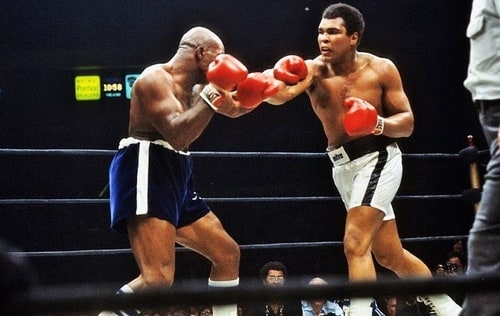 "Ali was a very nice man who treated me well. He was an easy-going guy, an easy guy to talk to. When the cameras came he put on a show, but away from the cameras he was a very quiet guy."

"Anyone who fought Ali and did well, they were basically made. I think I did quite well; I went 15 rounds with him. He won the fight but I kept my name clean.

"We're still very close," said Shavers. "But because Ali was such a great fighter and such a great man, it's sad to see him in the shape he's in now.

"Ali doesn't want you to feel sorry for him, but you can't help it because you love the guy. If you get to know Ali you'd think he never even had Parkinson's, the way he carries himself.

"But it's a shame, when you love a guy, to see him as he is now, when you remember him as he used to be. It's hard to be around him.

"Without a shadow of a doubt he was the greatest. People love him because he gave back. He helped so many people besides himself." 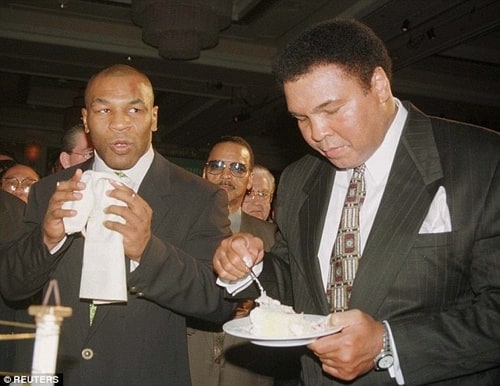 “In this situation, every head must bow, every tongue must confess, this man is the greatest of all time.”

“I’ve seen him in the ring with killers. Foreman, Shavers – killers who hit much harder than I and he takes these guys greatest punches and that’s what made him such a champion.

“Watching Ali gave me this confidence and deep down inner belief.

“He used to make every prediction come true. He would take his character and use it to reflect against his opponents – and he made them believe that he was invincible."

"No man like him. There just isn't, everything that we have, he supersedes us, even our arrogance and our ego...I'd say from a boxing perspective, Ali is a fucking animal. He looks more like a model than a fighter, but what he is, he's like a tyrannosaurus rex with a pretty face. He's just mean and evil, and he'll take you to deep water and drown you. He's very special, the best in the world."
shotswerefired's rating: 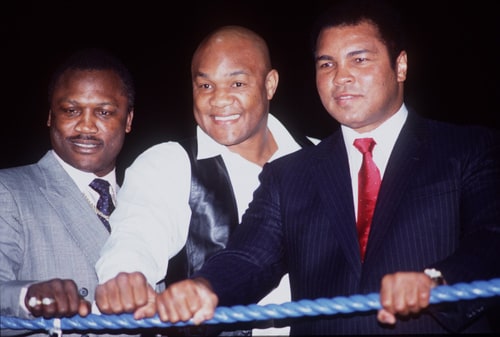 "If you put Ali in boxing, you won’t get what he really was. The life he lived outside of the ring, what he had to say, the bravery he had, made him what he was: a prophet, a hero, a revolutionary — much more than a boxer. It really brings him down to rate him as a boxer. He only did boxing to run his mouth. Whatever message he was destined to get across, he used boxing to do it. I mean, he could do the shuffle and occasionally throw a good jab, even get a few knockouts, but that doesn’t put him in boxing. Forget about boxing, he’s been a gift to the world."

I don’t find his illness sad, though, as the guy is a hero. He’s still beautiful to me. You can talk with war veterans and not know they have a wooden leg. What they did makes their illness unnoticeable. A hero is a guy that you get into a corner and you beat him and you beat him and you beat him and, rather than going down, he says to himself, “If I go down, all the people that believe in me will go down with me. I must stand.” And because Ali stood, he got injuries. I don’t feel sorry for him; I feel proud that I even know him.

What makes Muhammad Ali special is that he loves life. He didn’t fall in love with being young and doing the shuffle, he fell in love with life. Right now, he’s probably thinking how he’s going to sneak a dessert past his caretakers. He’s still living. He doesn’t hide. 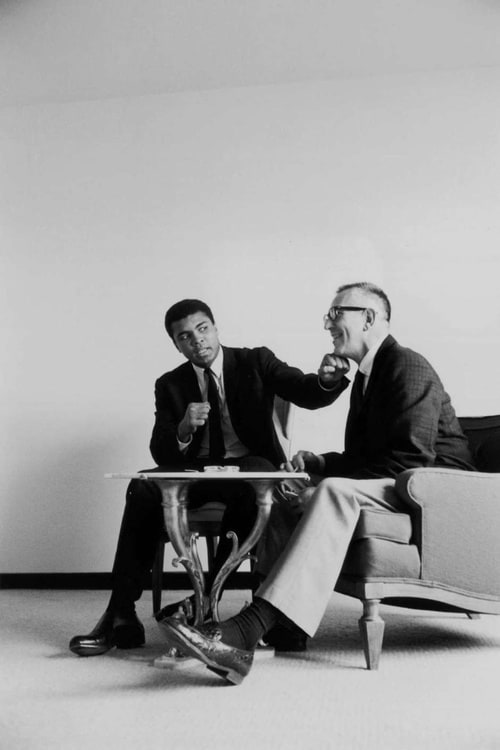 "I'd like to borrow his body for just forty-eight hours — there are three guys I'd like to beat up, and four women I'd like to make love to." 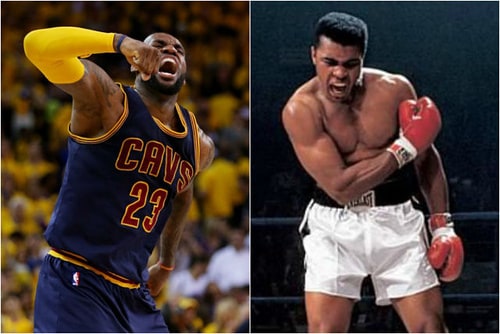 "The reason why he's the GOAT is not because of what he did in the ring, which was unbelievable," James told ESPN.com, referring to the acronym commonly attached to Ali, which stands for "greatest of all time."

"It's what he did outside of the ring, what he believed in, what he stood for, along with Jim Brown and Oscar Robertson, Lew Alcindor -- obviously, who became Kareem [Abdul-Jabbar] -- Bill Russell, Jackie Robinson. Those guys stood for something. He's part of the reason why African-Americans today can do what we do in the sports world. We're free. They allow us to have access to anything we want. It's because of what they stood for, and Muhammad Ali was definitely the pioneer for that."

"Today I can sit and go to China and make trips to China and all over the world and people know my name and know my face," James said. "I give all credit to Muhammad Ali because he was the first icon." 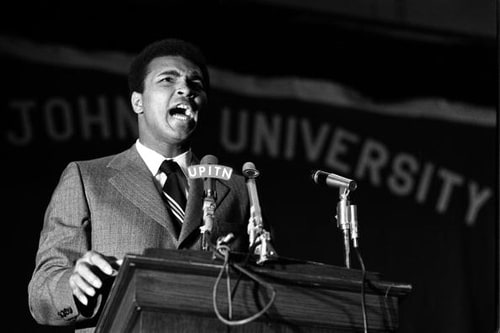 Warriors coach Steve Kerr began practice with an Ali tribute song including the lyrics: "I'm Ali, the black Superman. I'm Ali, catch me if you can."

"What he did in terms of trying to promote equality, raising the level of consciousness about what was happening in this country - [he was] probably the most influential athlete in the history of our country." 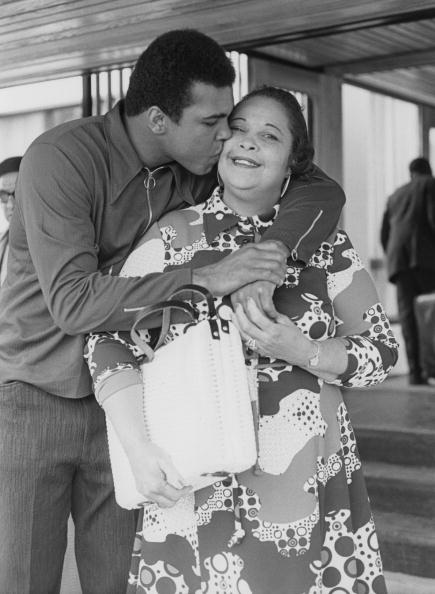 "I always felt like God made Muhammad special, but I don't know why God chose me to carry this child."

"When he was a child he never sat still. He walked and talked and did everything before his time. His mind was like the March wind blowing every which way." 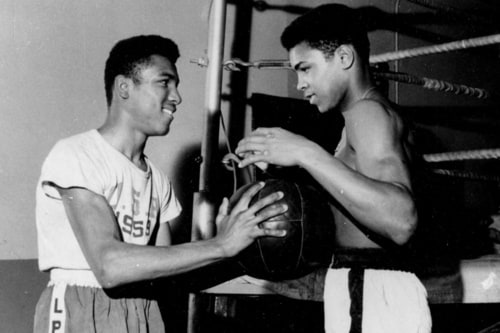 "He used to ask me to throw rocks at him. I thought he was crazy, but he'd stand back and dodge every one of them... I could never hit him." 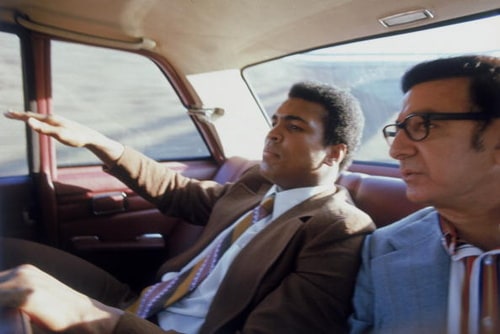 "He destroyed a generation of fighters by boxing with his hands down. Everyone who did that got creamed but Ali was so quick he could get away with it." 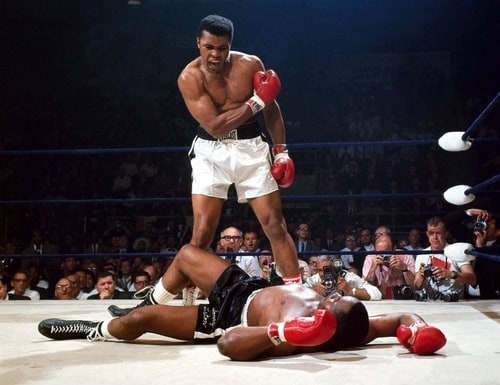 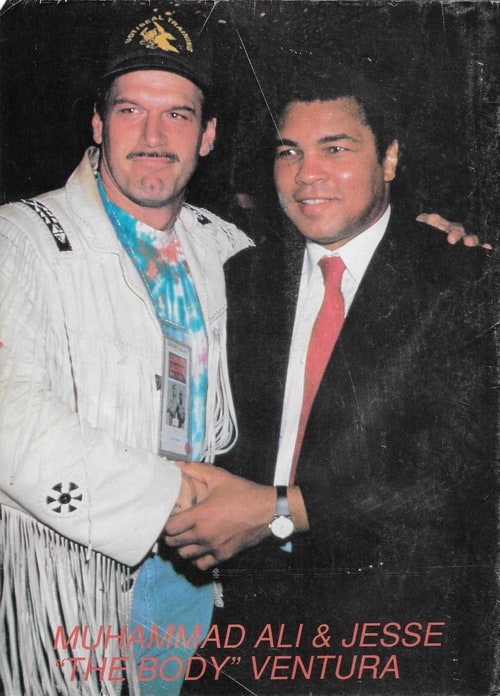 "You know, it was back in '64 that a hero, and an idol of mine, Muhammad Ali, beat Sonny Liston. [Ali] won, he shocked the world. No one said he could do it." 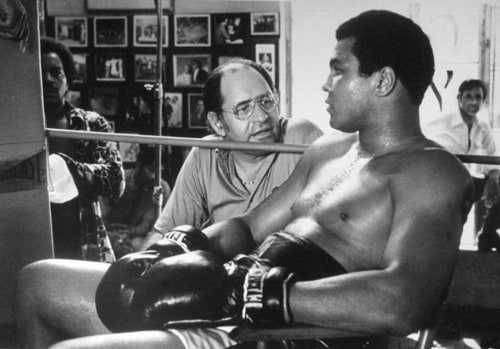 "He has always been a little kid, climbing out onto tree limbs, sawing them off behind him and coming out OK." 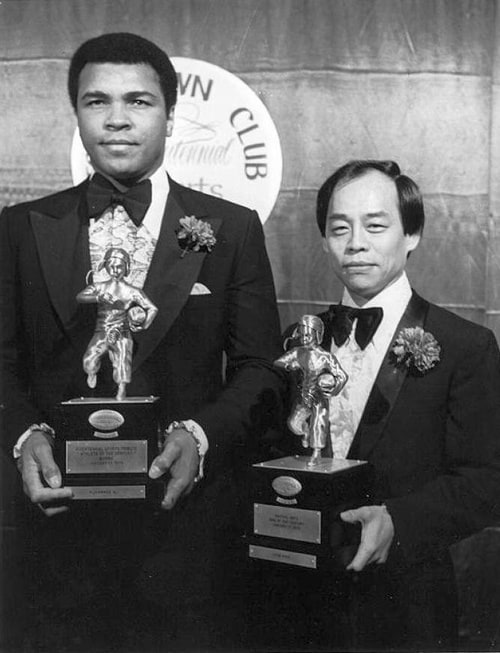 "Even though I think of Ali as the original trash talker, he is a very quiet man when he's among close friends - he's also very smart, by the way - but when the media shows up, he lights up." 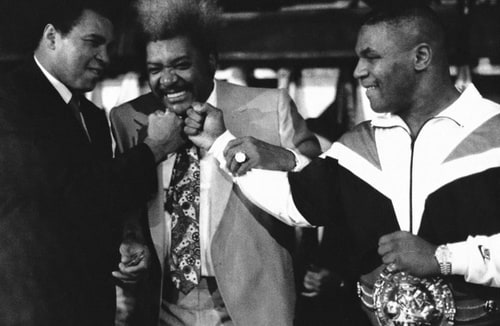 His most admired boxer: "Ali. Not just for his skills, but because he was a real star. He wasn't that powerful, but he was very light, very fast. Now, I like Tyson. He looks like a tiger! However, Tyson cannot fight for a long time. He lacks stamina. If the fight goes to the eleventh or twelfth round, he starts to look tired. In the early rounds, he's very powerful, very dangerous. Ali was very smart, though. He had very clever tactics. Of all the fighters, I like to watch Muhammad Ali the best." 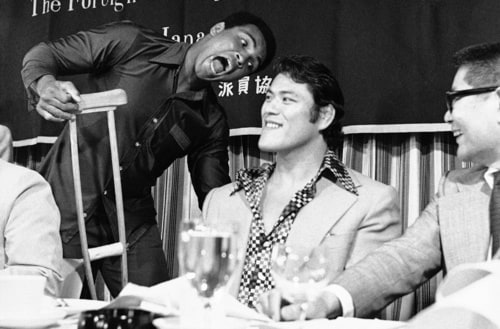 "I would like to express my deepest regret to the one who was my partner in the ring, a man who battled until the end. Thanks to Ali and the reputation of our fight, I can do what I'm doing today and bring a different perspective to politics and in particular foreign policy." 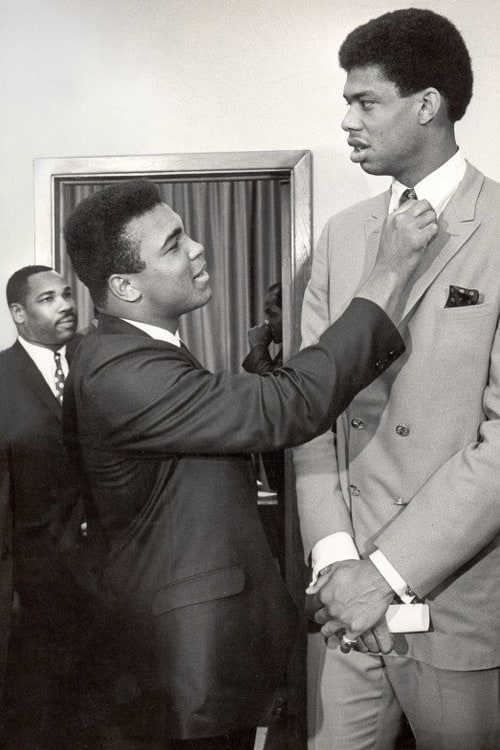 “During my more than 50 years in the public eye, I have met hundreds of renowned celebrities, artists, athletes, and world leaders. But only a handful embodied the self-sacrificing and heroic qualities that defined my friend and mentor, Muhammad Ali.”

“Part of Muhammad’s greatness was his ability to be different things to different people. To sports fans he was an unparalleled champion of the world, faster and smarter than any heavyweight before. To athletes, he was a model of physical perfection and shrewd business acumen. To the anti-establishment youth of the 1960s, he was a defiant voice against the Vietnam War and the draft. To the Muslim community, he was a pious pioneer testing America’s purported religious tolerance. To the African-American community, he was a black man who faced overwhelming bigotry the way he faced every opponent in the ring: fearlessly.” 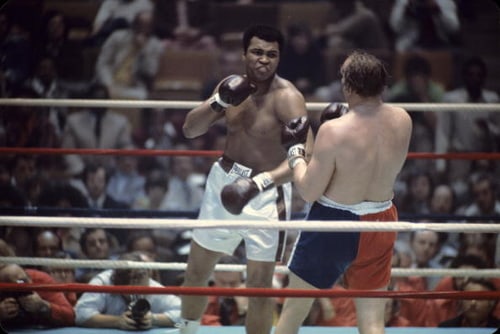 "The day of the Ali fight I bought my wife a powder blue negligee and told her 'wear this tonight, 'cause you'll be sleepin' with the heavyweight champion of the world'. That night, when I got back to the room, she said: 'Do I go to his room or will he be coming to mine?'". 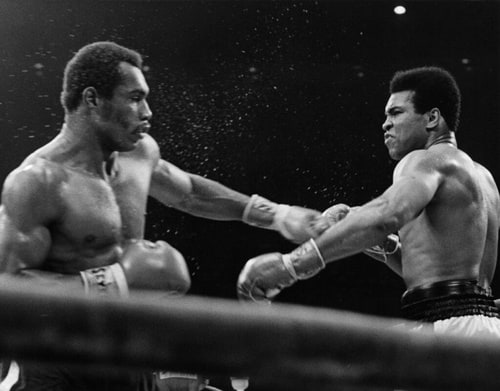 "Hitting Ali in the body or on the arms was like hitting a piece of cement." 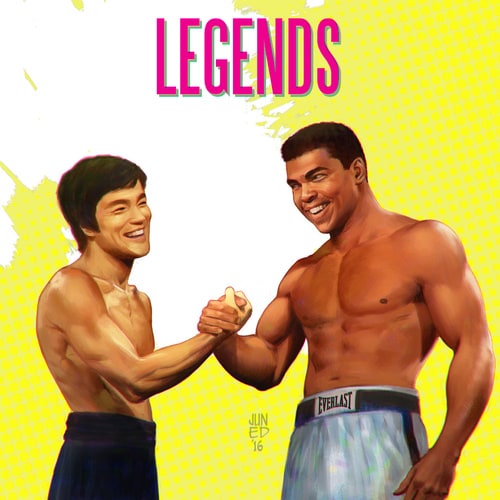 “My father loved Muhammad Ali. He loved to watch him fight, first of all.

“He had boxing films of him and he would study them. So he was definitely a great admirer.

“I think my father would’ve been an admirer of his stance, his own stance as a Humanitarian, and the ability to express himself.

“My father was all about honest self-expression and he himself expressed himself honestly, powerfully, and Muhammad Ali did as well.

“So I think my father was and would have continued to be a huge fan of Muhammad Ali’s, and so are we. There are two names that are mentioned together in the same breath often.

“I think that’s wonderful, it’s a beautiful thing. I hope it continues to be the case because he is also an icon.” 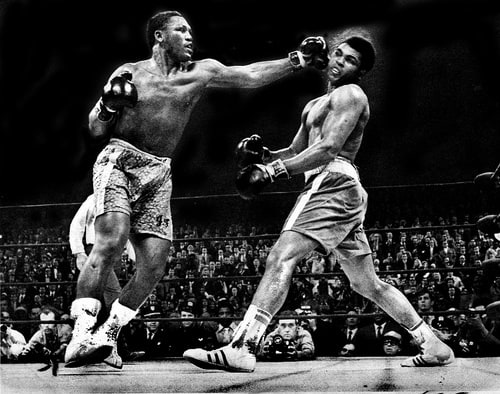 "Man, I hit him with punches that'd bring down the walls of a city. Lordy, lordy, he's a great champion."

Muhammad Ali (/ɑːˈliː/; born Cassius Marcellus Clay Jr.; January 17, 1942 – June 3, 2016) was an American professional boxer, activist, and philanthropist. Nicknamed "The Greatest," he is widely regarded as one of the most significant and celebrated sports figures of the 20th century and as one of the greatest boxers of all time.

7 votes
In Praise of... (12 lists)
list by shotswerefired
Published 2 years, 8 months ago

Muhammad Ali: Those were the Days
21 item list by Kenji
3 votes

Birds On Statues by kathy

The Favourite Films of Critics and Filmmakers by shotswerefired