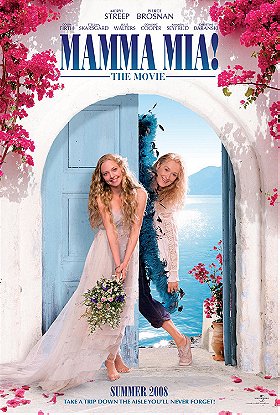 148 votes
Most Successful Movies of... All Time (500 items)
list by SchwarzerAbt
Published 15 years, 6 months ago

GemLil
4 votes
If I could give this film a negative rating, I would. It was worse than bad, it was so bad it made me redefine what I thought 'badness' to be. Mama Mia made me experience the following symptoms:

These real and in no way fabricated symptoms were a result of constant squinting and desperately embarrassed looks aw... read more

Torture in a film.

youngbloods
2 votes
One of the most stupidest movies I have ever seen. It had nothing it was just stupid. I'm not a huge fan of ABBA or anything but this movie is just irritating. It also didn't help with the cast, Meryl Streep who I find highly overrated, her acting abilities and her movies, so it's really no wonder I disliked this movie. Cheesy acting, bad music and endless mawkish scenes that get so ugly and cring... read more

pinupocket
2 votes
I laughted a lot and loved the good energy of the movie. You feel it. And the scenery is just FANTASTIC at my point of view specialy because I truly love Greece.

Though some things were weird, like when the girl's mother is dancing with her two crazy friends and then SUDDENLY they disappear. And appear again from nowhere. But even that was funny.

Joreth added this to a list 7 months, 1 week ago
Marathon Movies (844 movies items)

DarthTrino added this to a list 9 months, 4 weeks ago
Musicales (36 movies items)

"The runaway West End stage musical smash gets the Hollywood treatment, and proves to be almost as equally smashing in movie theaters as it was in Broadway theaters. Actually, there's only one real reason Mamma Mia is on this list. It's b'cuz I really like ABBA's music.... alot. And sayin' that does not make my hardcore pimp-ass any less hairier. So, you know.... shut up. "

DrLoomis added this to a list 2 years, 5 months ago
Collection (2069 dvds items)

filmbuilder added this to a list 2 years, 5 months ago
Top 50 Worst Movies Of All Time (50 movies items)

Sasa added this to a list 2 years, 8 months ago
Watched with my bff. (65 movies items)

diabolical dr voodoo added this to a list 2 years, 9 months ago

“I love musicals, ABBA, Meryl Streep, and a lot of the character actors appearing in supporting roles, but Mamma Mia! is, without a doubt, dreadful. Much of the blame goes not on the vague sketch of a plot, plenty of musicals have stories that merely exists as a threadbare setup between songs, but on Phyllida Lloyd’s amateur hour direction. The film is edited to shreds mistaking frantic cuts for energy, and an inability to understand that merely repeating the choreography from the Broadway stage for the camera is not successful staging. Some of the cast seems game if a bit lost, Streep in particular appears to be over-doing it and Colin Firth is clearly having the time of his life, but a lot of the film feels lost at sea, like Pierce Brosnan’s winced performance or the fact that several” read more

kathy posted a image 3 years ago

Rachel added this to a list 3 years, 9 months ago