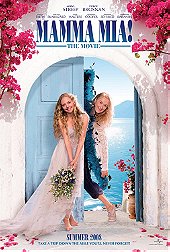 If I could give this film a negative rating, I would. It was worse than bad, it was so bad it made me redefine what I thought 'badness' to be. Mama Mia made me experience the following symptoms:

These real and in no way fabricated symptoms were a result of constant squinting and desperately embarrassed looks away from the tele, my stomach muscles contracted every time a song was introduced into the plot, as seamlessly as Frankenstein's stitching. The fever was a result of my attempts not to scream at the television every time a desperately under-sexed, middle-aged, ropey-looking hippy woman cackled and fell back on a sofa...scenes of such make up 90% if this excuse for a film. I am not lying when I say this film bought about all the symptoms of SARS, except there was no chance of the kind release of death.

I am an ABBA fan, I came out as one a long time ago, I love their songs and I know they're cheesy and tongue in cheek. I approached this film with the same openminded, 'tongue-in-cheekery'...but it cannot be consumed this way. Were it a brit flick, maybe, but it floats somewhere between hollywood blockbuster and cheeky low budget British film, which I found unsettling and awkward to say the least. The whole film was shot disastrously, even the grain seemed to switch, lighting and cinematography were totally erratic, it looked liked it was knocked up by some woefully under qualified, 17 year old film student in his garage with his mate who took a break from writing Brokeback mountain fan fiction, to help with the project.

In some of the songs, the characters seem to go fairly easily from speech to music, but in others they seem to recognise how ridiculous the premise of this movie is, by acknowledging the awkwardness of the links. Moments such as the entry into 'Chica Tita' are acted with asides, almost like soliloquies, which are all very well in theatre but a redundant concept in film where there is no audience to respond. Another moment that left me biting my pillow in embarrassment.

The lead role played by Meryl Streep is supposed to be a single, ageing woman who seems to be recovering from a youth in which she slept with everything that moves. Her obvious slutty past has led her to bring up a reckless and unlikeable daughter who has decided to get married at 20 years old. Amanda Seyfried, who plays daughter Sophie, cannot act, as a result there is not an ounce of sincerity in what she says, she seems vapid and fake. The fundamental problem with this film is the fact that the main characters are so unlikeable, also add the shoddiness of the whole thing and the fact that half of them couldn't actually sing....its just diabolical.

I know I am against the whole world with this review, and my ovaries are begging for me to like Mamma Mia; but I cannot, just cannot fathom how such a premise ever got off the ground, a paper thin narrative around some ABBA songs. Its the same as watching a bunch of old women on a young relatives hen do, trying to prove they still have it by joining in the Karaoke. I barely got through the whole thing without resolving to self harm.