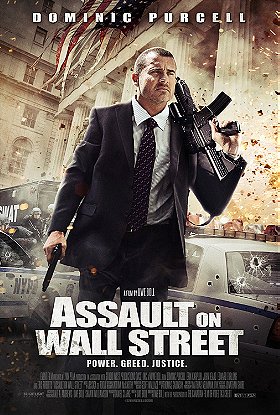 View all Bailout: The Age of Greed lists (14 more)

1 vote
View all Bailout: The Age of Greed pictures (3 more)

So Uwe Boll can make a better movie

Reno
I could not believe it was made by the director who is famous for his crap movies. When he had the most popular names in his kit, he gave nonsense movie 'In the Name of King'. For me 'Rampage' was his best movie though it was only okay type. I thought he could never make a better movie than that but surprised me and everybody with this. Yeah I liked it very much, the movie with not much famous act... read more

An assault on good taste and intelligence...

PvtCaboose91
"If the government, the prosecutors and the judges fail on their duty, I will not fail on mine."

The last Uwe Boll-directed motion picture I viewed was 2008's Far Cry, one of the filmmaker's trademark videogame adaptations, and I almost lost the will to live. Yet, Boll is still churning out flick after flick, and now we have 2013's Assault on Wall Street, an attempt by the German sh... read more
View all Bailout: The Age of Greed reviews

olya added this to have watched list 1 year, 3 months ago

Mustanaamio7 added this to a list 1 year, 8 months ago

"9.3. 2019 An ordinary man working as a security guard learns that his investments aren't worth shit anymore, and after that his whole life starts crashing down. The main idea may look good on paper but the film is nothing but just another completely predictable and cheap revenge fantasy. Can you really expect anything else from a director like Uwe Boll? Even the best ideas are totally useless if the director himself is a completely incompetent hack."

JackJot added this to wanted list 3 years, 2 months ago

AdeleDazeem added this to wanted list 3 years, 4 months ago

Hussam Khalil added this to have watched list 3 years, 7 months ago

sevendust added this to have watched list 3 years, 10 months ago

Viridiana added this to have watched list 4 years, 4 months ago