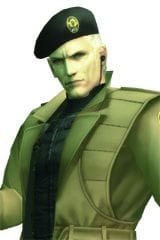 My Thoughts: Meh. As a product of the successor project to make the ultimate battlefield commander based on genes from the late Boss, he was bound to be a contender! His voice abilities were a nice touch on draining stamina and he was a slippery mother to hit with a gun.

Gene also made the comparison that he and Naked Snake were 'brothers' because they are both products of the Boss. This made the final battle a little more important and further tied it to the consoles MGS' by pitting brother against brother. He didn't have any lasting affect on me though. 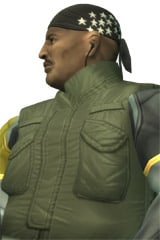 Simply apply the right type of pain, to the right degree, at just the right location.

My Thoughts: This overweight cripple filled in the standard Ocelot role of double-crosser but he seemed to be playing more of a puppet which instantly puts him in the Mug Book.

The battle was quite easy. He floated back and forth with no habit for accuracy with his weapons. It was a good thing I suited up with an RPG to make this easy fight even simpler. 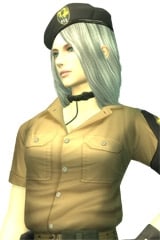 Your children; Les Infant Terribles. Snake, your son will bring the world to ruin. Your son... will save... the world.

My Thoughts: Plot twist!!! I completely didn't expect it and was absolutely gobsmacked when it came about. Just goes to show that Hideo still has some aces up his sleeves.

My only problem with her boss battle is that she is inside a Metal Gear so you don't actually take her on person-to-person. I guess it would have been a similar fight to Psycho Mantis but who knows! 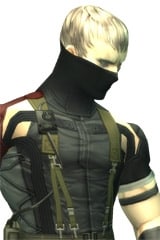 My Thoughts: I wouldn't say it was the best boss fight but he is definitely a supreme opponent and a very cool looking gentleman. Cutting up bullets and dodging any form of physical contact makes this guy a legend.

I was even more surprised to find out who he eventually becomes and I'm actually oustounded that they waited this long to show him in his organic prime...if you know what I mean. 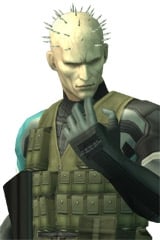 Soldiers need a hero. They need a man for whom they can gladly risk their lives. Can you bear the burden of knowing that you hold your men's lives in your hands, Snake?

My Thoughts: Supposed to be the Anti-Snake but I couldn't really see it. I was anticipating his first appearance from when Cunningham mentioned him.

I enjoyed the match-up though but I felt he didn't have enough to take down Snake. The obvious introduction of an ice element foe was gonna happen and it was definitely worth it for this chilling customer.

Part of the Metal Gear Series.

Several years after Operation: Snake Eater, Naked Snake finds himself as a prisoner of his former unit (FOX) who have started their own nation in northern South America with nothing but hostile intentions in mind. Snake teams up with Roy Campbell to take down this rogue force aswell as to find out what he has to do with the other half of the Philosopher's Legacy location and to clear his name. This is the San Hieronymo Takeover. 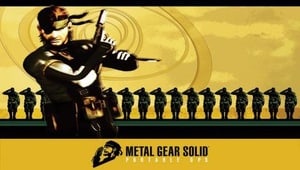 The voice actors are displayed here as the entry for each member.

The Sons of Liberty
6 item list by Seaworth
11 votes

First game I played for each game console by Cherokee

Games Played in 2011 by CelShader

My Favorite Games Made by Treasure Co. Ltd by Jack Purcell

A Rainbow of Movies II - Orange by Elfflame

My Favorite Characters by cephras

The Sons of Big Boss by Seaworth

The Consoles by Seaworth