The original Super Mario Bros. launched on the Japanese Famicom console in October 1985. Does it really need an introduction?
Prelude's rating:

The most common version of the classic was this compilation that included Duck Hunt as well as a Light Zapper gun. This cartridge (no box case) came bundled with the majority of NES consoles. 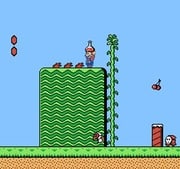 Nintendo's own sequel to Super Mario Bros. was released in Japan as Super Mario Bros. 2 (aka 'The Lost Levels' as its known in the US) in 1986. However, because of that game's difficulty and its close similarity to the original game, Nintendo decided not to release it in the United States.
Prelude's rating: 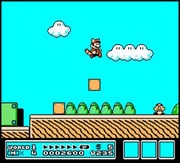 Quite easily the greatest 2D platformer ever made. Released in 1988 in Japan, in 1990 in North America, and 1991 in Europe, it introduced many new elements to the popular series - map screen, mini-games, many new power-ups and enemies.
Prelude's rating: 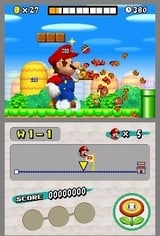 0
Mario vs. Donkey Kong 2: March of the Minis - Nintendo DS

0
Super Mario Bros.: The Lost Levels - Wii Virtual Console
The Japanese version of Super Mario Bros. 2 was never released on the NES outside of Japan. It did however appear as a re-make in 'Super Mario All-Stars' on the SNES.

The original version in all its classic glory was finally made available in 2007 on the Wii's Virtual Console. ... (more)

This list concentrates on Super Mario Bros. series (specifically the platformers, both 2D and 3D), not all Mario licenses.

For other Mario-based spin-offs, see the following:

The End by ape

Most Addicting Games I Have Ever Played by The Cinephile

Top Reasons to get a Wii by CrazyFrog

Medal of Honor series by Prelude