0
Virginia Valli
Virginia Valli (June 10, 1898 – September 24, 1968) was an American stage and film actress whose motion picture career started in the silent film era and lasted until the beginning of the sound film era of the 1930s.
Born Virginia McSweeney in Chicago, Illinois, she got her acting start in Milwaukee with a stock company. She also did some film work with Essanay Studios in her hometown of Chicago, starting in 1916.
Valli continued to appear in films throughout the 1920s. She was an established star at the Universal studio by the mid-1920s. In 1924 she was the female lead in King Vidor's Southern Gothic Wild Oranges, a film now being seen after several decades of film vault obscurity. She also appeared in the romantic comedy, Every Woman's Life, a bout "the man she could have married, the man she should have married and the man she DID marry." She made the bulk of her films between 1924 and 1927 including Alfred Hitchcock's debut feature, The Pleasure Garden, Paid To Love (1927), with William Powell, and Evening Clothes (1927), which featured Adolphe Menjou. In 1925 Valli performed in The Man Who Found Himself with Thomas Meighan. The production was made at a Long Island, New York studio.
Her first sound picture was The Isle of Lost Ships in 1929, but her film career would not last much longer due to declining fame. Unable to find a suitable studio, she quit films after making the quickie Night Life in Reno, in 1931.
Valli was first married to George Lamson and the two shared a small bungalow in Hollywood, in close proximity to the Hollywood Hotel.
In 1931, she married her second husband, actor Charles Farrell, to whom she remained married until her death. They moved to Palm Springs, where she was a social fixture for many years.
She suffered a stroke in 1966, and died two years later, aged 70, in Palm Springs, California. She was buried in the Welwood Murray Cemetery of that city. She had no children. 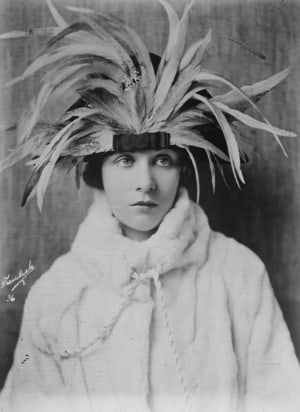 Born in London, Jeans was the daughter of an art critic.
She planned to become a singer but began her career on the London stage in 1908 at age 15, at the invitation of Herbert Beerbohm Tree. An early Broadway appearance was in The Man Who Married a Dumb Wife in January 1915 and as Titania in A Midsummer Night's Dream in February 1915. She played Lady Mercia Merivale in the London musical hit Kissing Time (1919). She appeared in a production of James Elroy Flecker's Hassan at His Majesty's Theatre in London in 1923. Incidental music for the play was by Frederick Delius, and the ballet in the House-of-the-Moving Walls was created by Fokine. In 1924, she appeared in Ivor Novello's play The Rat at the Prince of Wales's Theatre in London. The following year, she was in Richard Brinsley Sheridan's play, The Rivals at the Lyric Theatre, Hammersmith, together with Claude Rains, his ex-wife Marie Hemingway, and his then-current wife, Beatrix Thomson.

She appeared in major roles in two Alfred Hitchcock silent films, Downhill (1927) and Easy Virtue (1928) and various other British films, before playing a number of grande dames in Hollywood films starting in 1937, such as Hitchcock's Suspicion (1941), as well as in such films as Banana Ridge (1942), Gigi (1958) and A Breath of Scandal (1960).
Later stage roles included a revival of The Happy Hypocrite in London in 1936. Later Broadway roles were Crystal Wetherby in The Man in Possession in 1930 and Mrs. Emmeline Lucas in Make Way for Lucia in 1948. English productions included Anton Chekhov's plays, The Seagull, (1949 at the Lyric Theatre, London and then St. James's Theatre), Jean Anouilh's play, "Ardele" (1951 at the Vaudeville Theatre), Noël Coward's play, The Vortex (1952 at the Lyric Theatre in Hammersmith), T.S. Eliot's play, The Confidential Clerk (1953 at the Lyric Theatre), and William Congreve's play, The Double Dealer (1959 at the Old Vic Theatre, and other plays there that season, with Judi Dench). She also acted in West End productions of plays by Oscar Wilde, including Lady Windermere's Fan (1945 at the Haymarket Theatre, directed by Sir John Gielgud; and 1966 at the Phoenix Theatre (London)), A Woman of No Importance (1953 at the Savoy Theatre) and as Lady Bracknell in The Importance of Being Earnest (1968 at the Haymarket Theatre). 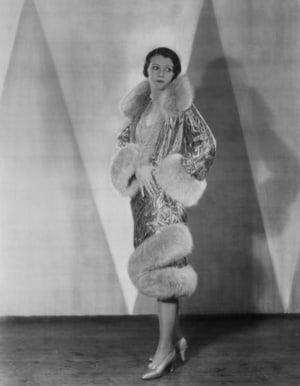 Jeans' brother Desmond was an actor and boxer, while her sister Ursula became a respected character actress and married the actor Roger Livesey.
She was married twice: first to the actor Claude Rains, from 1913 to 1918; and then to the barrister and playwright Gilbert Edward "Gilley" Wakefield, from 1920 until his death in 1963. She enjoyed horse racing and poker.

Born Olga Knipper, she was the daughter of Konstantin Knipper, a railway engineer and the niece and namesake of Olga Knipper (Anton Chekhov's wife), both Lutherans of ethnic German ancestry. She went to school in Tsarskoye Selo but, after watching Eleonora Duse, joined the Moscow Art Theatre's studio. There she met the great actor Mikhail Chekhov (Anton's nephew) in 1915 and married him the same year, taking his surname as her own. Their daughter, also named Olga, was born in 1916.
Two years after the 1917 October Revolution, Chekhova divorced her husband but kept his name. She managed to get a travel passport from the Soviet government, possibly in exchange for cooperation, which led to permission to leave Russia. She was accompanied by a Soviet agent on a train to Vienna, then she moved to Berlin in 1920. Her first cinema role was in Friedrich Wilhelm Murnau silent movie Schloß Vogelöd (1921). She played in Max Reinhardt's productions at UFA, the same studios where Fritz Lang directed Metropolis (1927). She made the successful transition from silent film to talkies. In the 1930s, she rose to become one of the brightest stars of the Third Reich and was admired by Adolf Hitler. She appeared in such films as Der Choral von Leuthen although she preferred comedies.

A published photograph of her sitting beside Hitler at a reception gave the leaders of the Soviet intelligence service the impression that she had close contacts with Hitler. She had more contact with the Minister of Propaganda, Joseph Goebbels, who referred to her in his diaries as "eine charmante Frau" ("a charming lady"). She is also rumored to have been a communist spy in a Russian conspiracy. According to the book 'Killing Hitler' (2006) of the British author Roger Moorhouse she was pressured by Stalin and Beria to flirt with Adolf Hitler in order to gain and transfer information so that Hitler could be killed by secret Soviet agents. Also, the controversial Argentine theater book "Hotel Berlin 1933" (Pablo Sodor) shows a relationship between Olga Chéjova and Karl Heinrich von Stülpnagel. 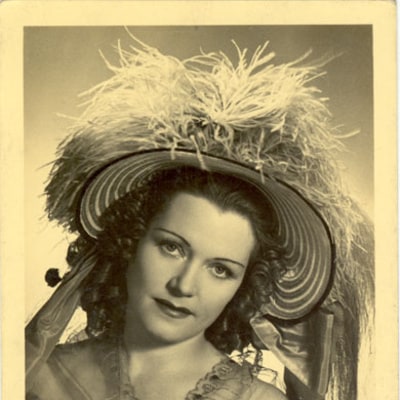 During World War II her acting career was less successful; her one film made in Hollywood was unpopular, largely because her accent was too strong. After the war she lived in the Soviet sector of Berlin, but eventually she managed to escape from her Soviet contacts. In 1949, she moved to Munich, Bavaria, and launched a cosmetics company. At the same time she continued acting, and played supporting roles and cameos in more than 20 films. She largely retired from acting in the 70s, after publishing a book of memoirs. Her correspondence with Russian actors Olga Knipper and Alla Tarasova was published posthumously.

Black was born as Karen Blanche Ziegler in Park Ridge, Illinois, in suburban Chicago, the daughter of Elsie Mary (née Reif), a writer of several prize-winning children's novels, and Norman Arthur Ziegler. Her paternal grandfather was Arthur Charles Ziegler, a classical musician and first violinist for the Chicago Symphony Orchestra. Her sister is the actress Gail Brown. Black was of German, Bohemian (Czech) and Norwegian descent.

Black made her acting debut in a small role in The Prime Time, a B-film released in 1960. However, it would be six years before her next screen appearance, in Francis Ford Coppola's You're a Big Boy Now (1966). Beginning in 1967, she appeared in guest roles in several television series, including The F.B.I., Run for Your Life, The Second Hundred Years, The Big Valley, The Iron Horse, Judd for the Defense and Mannix. One of her early roles was in Season 1, episode 10 (Log 132-The Producer) of the NBC series, Adam-12 as Susan Decker. In 1984-1985, she was cast as Sheila Sheinfeld in three episodes of another NBC series, E/R.
Her feature film career expanded in 1969, playing the role of an acid-tripping prostitute opposite Dennis Hopper and Peter Fonda in the iconic counterculture movie Easy Rider. In 1970, Black appeared as Rayette, the waitress girlfriend of Jack Nicholson, in the film Five Easy Pieces, for which she was nominated for an Academy Award for Best Supporting Actress. Black played an unfaithful wife, Myrtle Wilson, in the 1974 version of The Great Gatsby. In the same year she starred as Nancy Pryor, the stewardess who is forced to fly the plane, in the disaster film Airport 1975 (1974). In 1975, she played multiple roles in the televised anthology film Trilogy of Terror. The segments, all written by suspense writer Richard Matheson, were named after the women involved in the plot — a plain college professor who seduces a student ("Julie"), a pair of sisters who squabble over their father's inheritance ("Millicent and Therese"), and the lonely recipient of a cursed Zuni fetish that comes to life and pursues her relentlessly ("Amelia").
Black received a Golden Globe Award nomination for Best Actress for her performance as an aspiring Hollywood actress in the 1930s in John Schlesinger's The Day of the Locust (1975). She starred as a country singer in Robert Altman's Nashville (also 1975) and as a kidnapper in what turned out to be Alfred Hitchcock's last film, Family Plot (1976). She also co-starred with Bette Davis in Burnt Offerings (also 1976). She then played a dual role in a 1977 thriller, The Strange Possession of Mrs. Oliver.
Other notable films from the 1970s include Born to Win (1971) with George Segal and Robert DeNiro, Portnoy's Complaint (1972) directed by Ernest Lehman, Cisco Pike (1972) with Kris Kristofferson and Gene Hackman, The Pyx (1973) with Christopher Plummer, The Outfit (1973) with Robert Duvall, Rhinoceros (1974) with Gene Wilder and Zero Mostel, and Capricorn One (1978) with Elliott Gould.
In 1982, Black gave a critically acclaimed performance in Robert Altman's Come Back to the Five and Dime, Jimmy Dean, Jimmy Dean, where she starred alongside Cher and Sandy Dennis.
Her later career tailed off into numerous horror roles, but Black did gain and maintain a cult following, as alluded to by Family Guy television anchor Tom Tucker in his remark "Karen Black: what an obscure reference." in the episode Death Is a Bitch (season 2, episode 6).In April 2009, Black worked with director Steve
Balderson for Stuck! — an homage to film noir women-in-prison dramas, which co-starred Mink Stole, Pleasant Gehman and Jane Wiedlin of the The Go-Go's. Black also starred in John Landis' 2010 thriller, Some Guy Who Kills People. Later that year, Black appeared on Cass McCombs' song "Dreams-Come-True-Girl" from the album Catacombs. 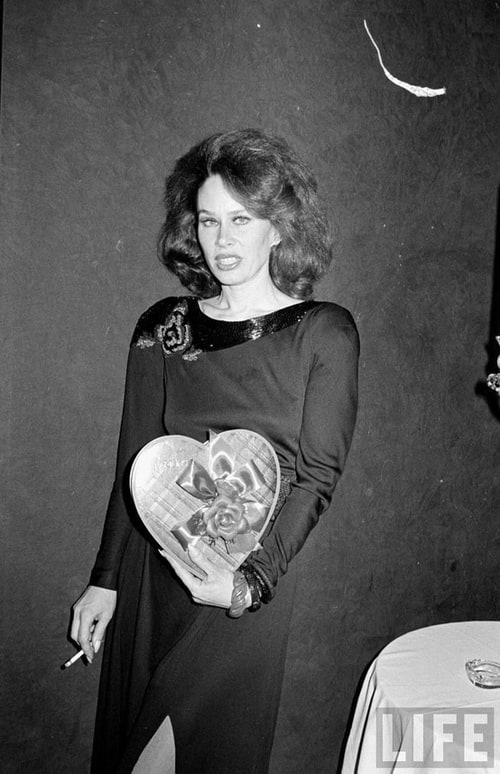 After her final films were released in 2010, she was diagnosed with cancer and did not make any more public appearances. She had a portion of her pancreas removed that year and battled on with two further operations. She was invited to attend the premiere of River Phoenix's last on-screen performance in the salvaged feature film Dark Blood, in which she had acted in a small part in the original early 1990s shoot. Black was unable to attend the event, held in the Netherlands in September 2012, due to her illness.
On August 8, 2013, Black died in Los Angeles from ampullary cancer at age 74. Actress Juliette Lewis paid tribute, saying "Karen Black was my mentor and a second mother to me. She inspired everyone she came in contact with."

Better in the book (Deathly Hallows part 1) by Hobbit

Discography of... Fettes Brot by SchwarzerAbt

The Best Movies of the 00s by Haydn, The Salami