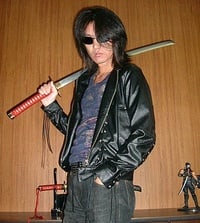 * The creator of the Dead or Alive and the modern Ninja Gaiden series.
* He has almost never been seen without his sunglasses. Many believe that he has no eyes.
* Openly criticizes and expresses his dislike for various other game developers, and is often seen as arrogant.
* Stated that his game, Ninja Gaiden 2, will be so ambitious that "When another developer plays it, they will lose motivation and confidence in their [own] games".
* Resigned from Tecmo and sued the company and its president, Yoshimi Yasuda, for damages based on "unreasonable and disingenuous statements" made in front of Itagaki's colleagues. Talk about leaving with a bang.
CelShader's rating: 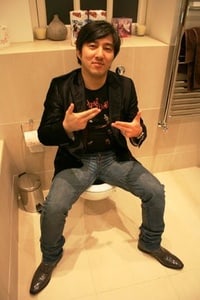 * Well known as the creator of Killer 7 and the No More Heroes series
* His nickname, Suda 51, is a pun on his given name. In Japanese, "go" means five and "ichi" means 1.
* He was known to make appearances wearing a lucha libre mask while promoting his game, Killer 7.
* Gave away rolls of toilet paper to promote his game, No More Heroes. The toilet paper featured the game's logo and images of the game's protagonist, Travis Touchdown.
* Often conducts video interviews while sitting on the toilet. Classy.

* He is best known as the assistant director of Castlevania: Symphony of the Night, and producer in every Castlevania game since Castlevania: Harmony of Dissonance.
* Look at him. He looks like a vampire.
* He always carries around that bullwhip
* He always wears his Van Helsing-esque hat
CelShader's rating: 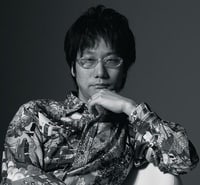 * He is most recognized as the creator and director of the Metal Gear Solid series.
* He intentionally misleads his fans with the use of ambiguous advertising
CelShader's rating:

* He's responsible for various horror/action titles such as the Resident Evil series, God Hand, Devil May Cry and, yes, Disney's Goof Troop.
* Mikami told the Japanese press that he would "commit harakiri" (ritual suicide by disembowelment) if his game Resident Evil 4 would come out on a system other than the Gamecube. Since then, Resident Evil 4 has appeared on the PS2, Wii, and iPhone. Better sharpen that blade, Mikami.
List from OCweekly.com


American video game developers have it all: Multi-million dollar development budgets and the world's largest video game market are at their disposal to make some of modern day's best video games.

However, they all lack one crucial thing--the rock star charisma of Japanese video game designers. When it comes to eccentric style, outspoken statements, and attention-grabbing publicity stunts, the game designers of Japan are second to none. Here's why:

Jacks of All Trades by ape

Where Is My Sequel? by Mr. Lays

"Call me Cid!" - A Final Fantasy List by Seaworth

Games Played in 2010 by CelShader

Developed by: Sonic Team by CelShader