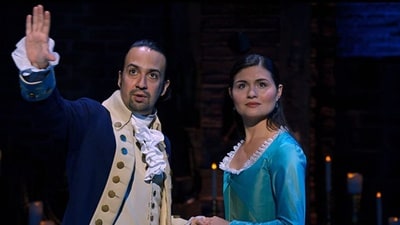 Notes: To be honest, I have to admit that I was rather sceptical at first. Indeed, I have to admit that I had never heard of this musical of even of Alexander Hamilton himself before watching this flick. To make things worse, in general, I’m not a huge fan of musicals and the idea of watching 150 mins of non-stop singing with no straight dialogue whatsoever on a single stage didn’t sound really appealing to me. However, to my surprise, I really loved the damned thing. Indeed, right from the very first song, I was impressed by the lyrics and the singing skills of this crew and I was pretty much hooked. He did help that Lin-Manuel Miranda had some major hip-hop influence for his lyrics and it was rather surprising how well it worked within such an historical context. But the damned thing was not only seriously entertaining, it was educational and, within a little more than 2 hours, you get also some fascinating crash-course about a crucial period of the history of the United States. Eventually, this movie was also a great reminder that the USA as a country, in spite of its flaws and various mistakes, remains intriguing and, to go back to its foundations and focus on its most overlooked founding father was just so fascinating.
johanlefourbe's rating:

A selection of 1001 movies chosen by Johanlefourbe