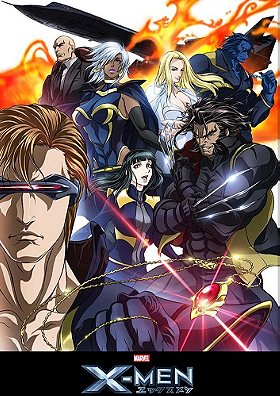 JxSxPx
1 vote
When originally announced, I was more than a little skeptical about the entire concept of “Marvel Anime,” a series of four twelve episode shows focusing on Iron Man, Blade, Wolverine, and the X-Men. I don’t know how well the others turned out, but X-Men turned out much better than I originally thought. I can’t even remember why I was skeptical of the whole thing at first, but it probably h... read more
View all X-Men reviews

The X-Men are a team of elite super-powered mutants gathered by Professor X to protect ordinary humans even as they are persecuted by them. In the wake of the death of one of their own, however, the team has stopped operations for a whole year. Then Professor X receives word of a mutant girl's mysterious disappearance in Japan. Sensing that something larger is afoot, he reassembles the team and sends them to investigate. They uncover a connection between her disappearance and an anti-mutant group known as the U-Men.
Release date: 1 April 2011
My tags:

DarthTrino rated this 7/10 8 months ago

dj brr added this to wanted list 3 years, 9 months ago

puchatnix added this to have watched list 4 years, 5 months ago

deleteaccount rated this 8/10 4 years, 7 months ago

louispencer added this to wanted list 4 years, 12 months ago

joshuaongzx added this to have watched list 5 years, 4 months ago

kck added this to wanted list 5 years, 5 months ago